Accessibility links
After Diesel Scandal, VW Turns To New Leadership And Electric Cars The German auto giant has a new top management and a new focus. The diesel scandal helped drive VW toward investing in electric cars, but other major automakers are betting on a plug-in future too. 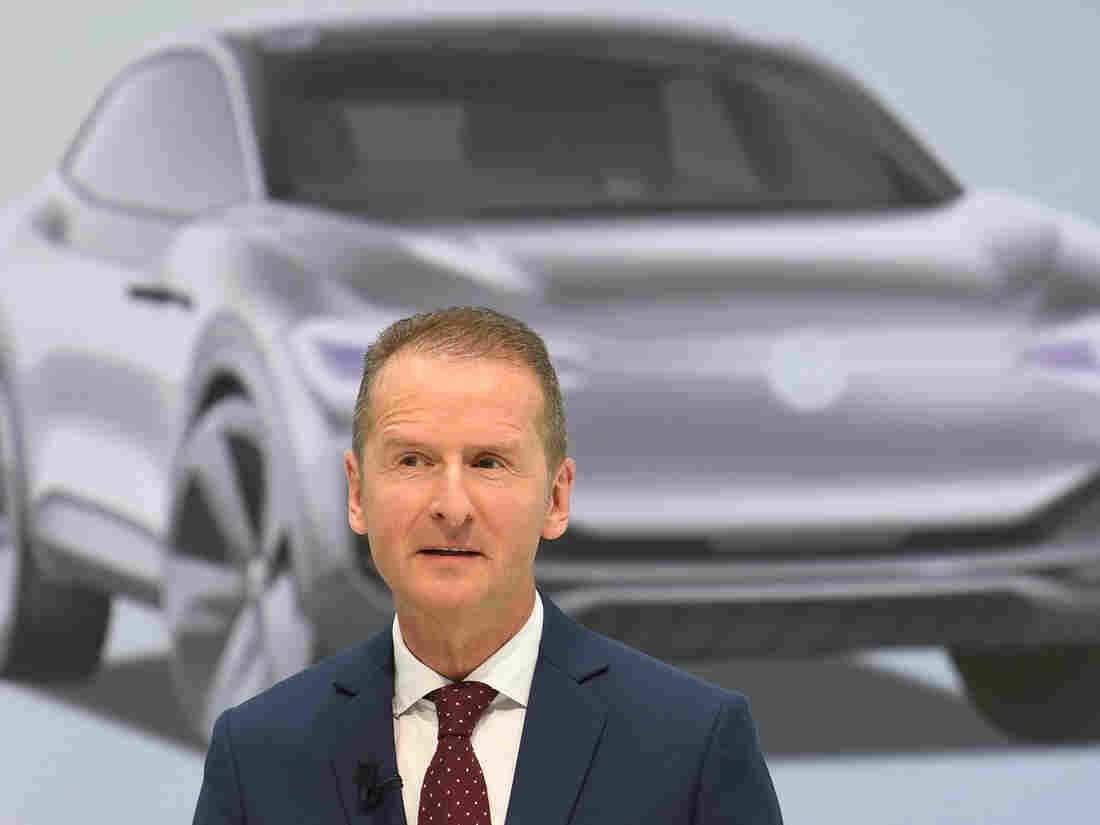 Herbert Diess, Volkswagen's new CEO addresses, the media during a news conference at the company's plant in Wolfsburg, Germany, April 13. As the company turns the page from its diesel emissions cheating scandal, it says its future is electric. Fabian Bimmer/Reuters hide caption 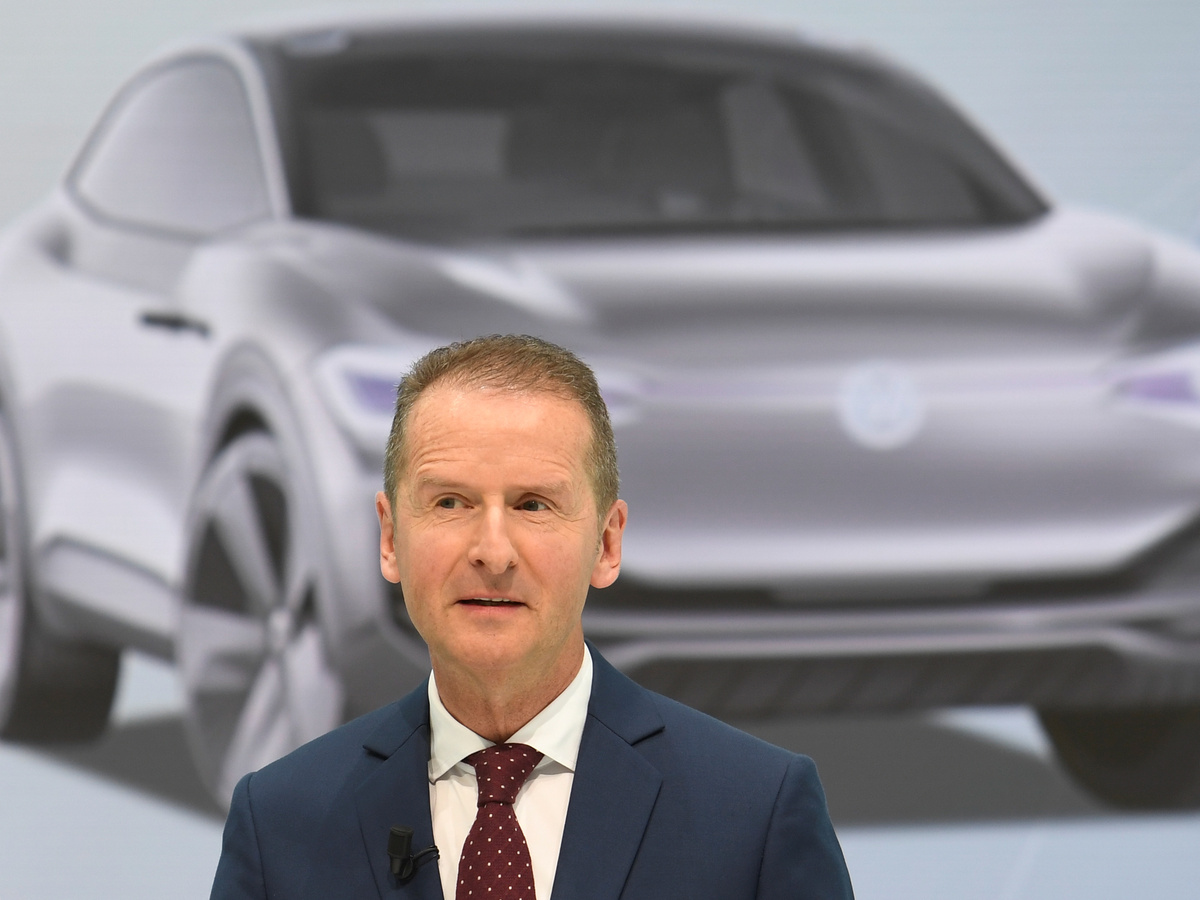 Herbert Diess, Volkswagen's new CEO addresses, the media during a news conference at the company's plant in Wolfsburg, Germany, April 13. As the company turns the page from its diesel emissions cheating scandal, it says its future is electric.

Volkswagen is trying yet again to turn the page after its emissions cheating scandal — leaving diesel behind in favor of electric cars.

The major shift comes as the German automaker — the world's largest in term of cars sold — has a new leader in Herbert Diess.

The company admitted to installing "cheat devices" that covered up how polluting its diesel vehicles were. Michael Horn, who was then the CEO of Volkswagen Group of America, took to a Brooklyn stage in 2015 for what would be the first of many apologies by company leaders.

"Our company was dishonest with the EPA and the California Air Resources Board and with all of you," Horn said. "And in my German words, we have totally screwed up."

To fix the "screw-up," VW has paid more than $20 billion in fines and settlements. There are still ongoing investigations in Europe. Last week, German authorities raided the headquarters of Porsche (a Volkswagen subsidiary) on suspicion of fraud and the manipulation of diesel emissions tests.

Jake Fisher, director of auto testing at Consumer Reports, says the time was almost perfect for VW to steer its business in a new direction.

"They needed to really walk away from diesel," he says. Before the diesel scandal, he says, the company didn't seem that interested in electric cars or fuel economy. 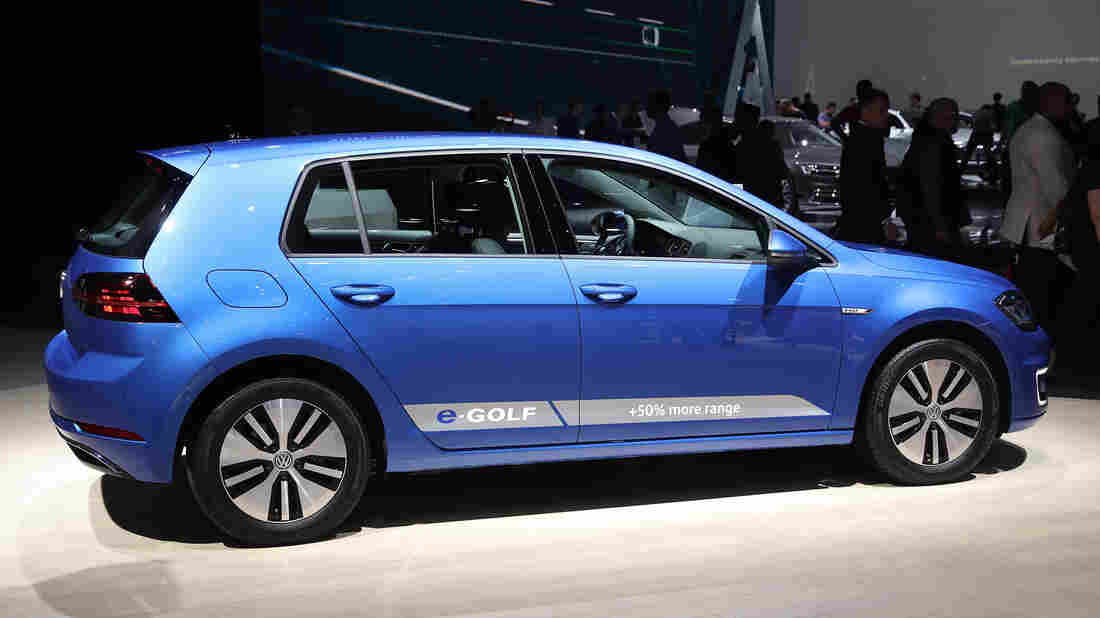 The Volkswagen e-Golf electric car is on display at the 2017 Frankfurt Auto Show in September. Sean Gallup/Getty Images hide caption 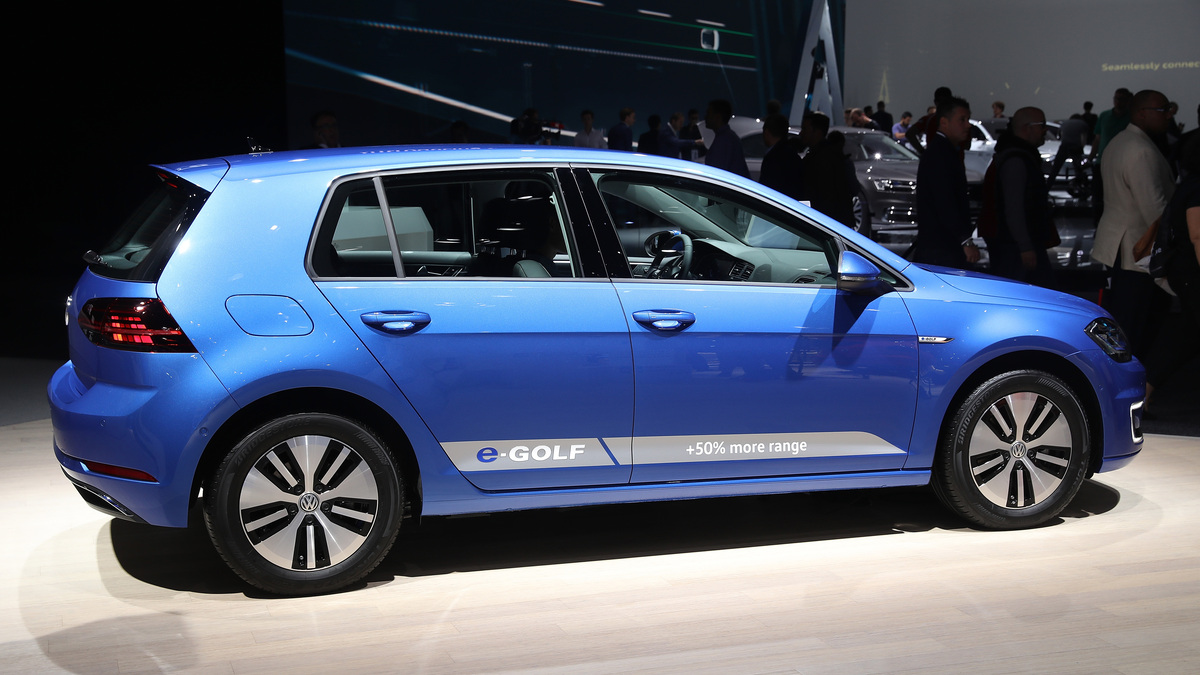 The Volkswagen e-Golf electric car is on display at the 2017 Frankfurt Auto Show in September.

VW had an electric car, the e-Golf, but Fisher says it was just window dressing. "They took a Volkswagen Golf, they put some batteries in it and really just did it so ... they could have an electric car," he says.

In many ways, the diesel scandal allowed VW to pivot, he says. It was too heavily invested in diesel technology — and had been for years.

Considering the other brands Volkswagen owns, including Bentley, Porsche or Lamborghini, performance and style have often trumped fuel economy. But that has begun to change.

Matthias Erb, VW's chief engineering officer in North America, says that nearly every brand and segment of the company will get some sort of electric offering.

Wells Fargo, Samsung And Volkswagen: Can A Good Name Be Restored?

"Electrification is going to be the powertrain of the future," he says. He admits that as terrible as the VW diesel scandal was for the company, it "supported and accelerated those conversion processes in the direction of electrification."

Joel Levin with Plug In America, a group that advocates for electric car owners, is skeptical about VW's plans.

Levin has two words for Volkswagen and the others: "Show me."

Why 300,000 Volkswagens Are Being Stored In These Massive Auto Boneyards

Volkswagen has paid more than $20 billion in fines and settlements. An earlier version of this story misstated the amount by omitting the word "billion."