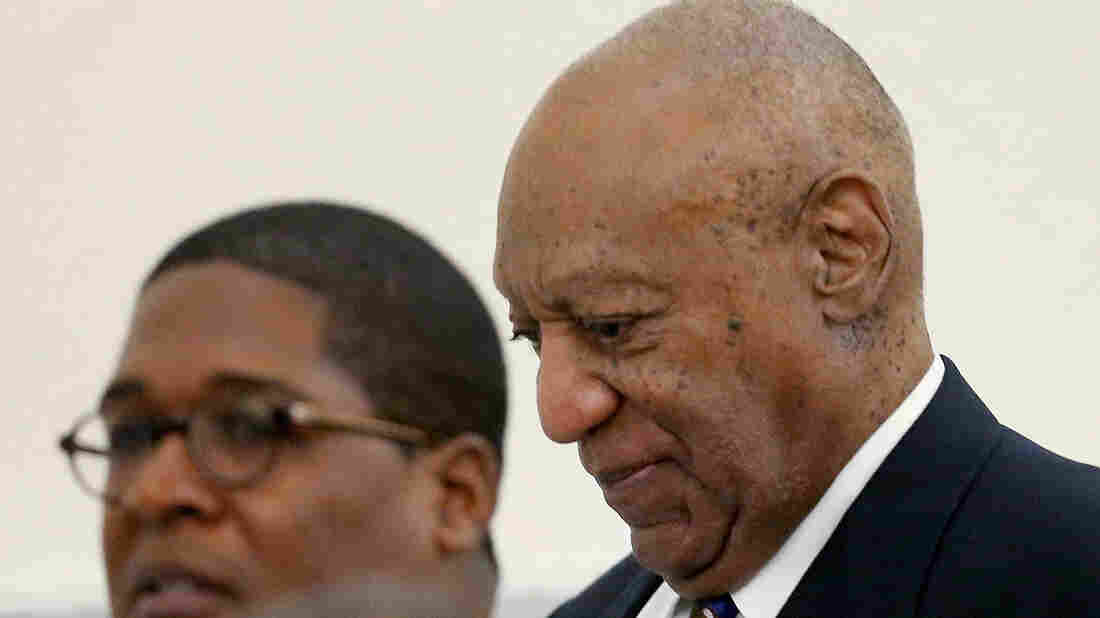 Bill Cosby walks through the Montgomery County Courthouse in Norristown, Pa., with his spokesman, Andrew Wyatt, during a break in his sexual assault retrial on Tuesday. Pool/Getty Images hide caption 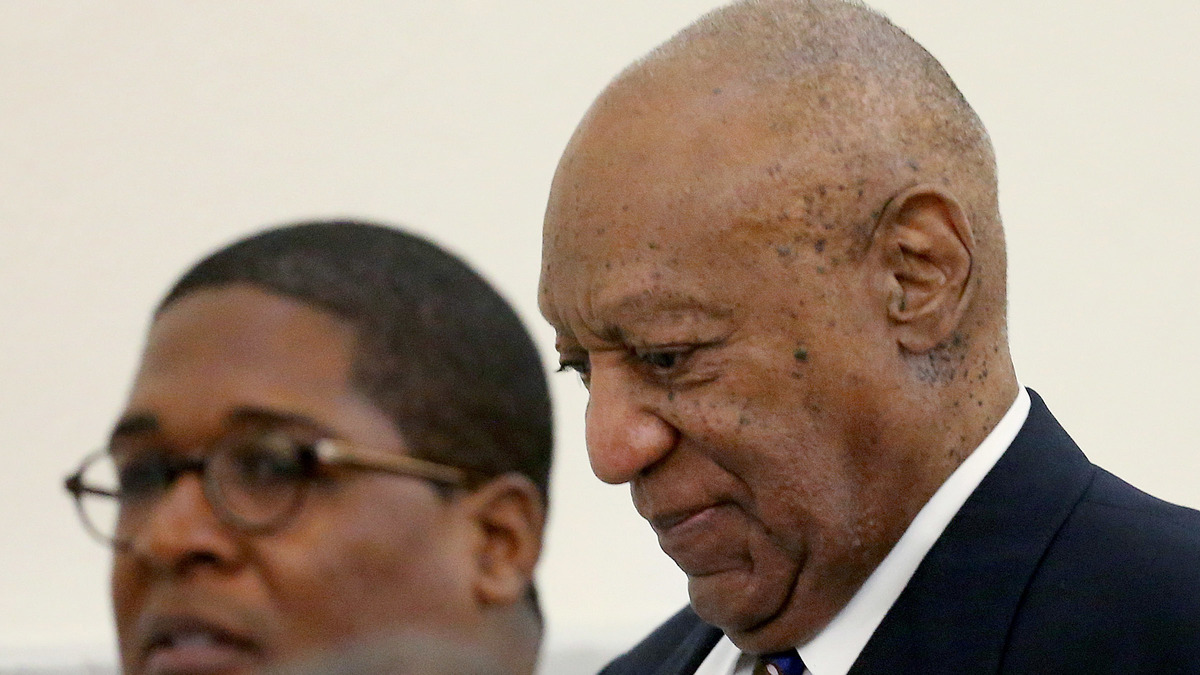 Bill Cosby walks through the Montgomery County Courthouse in Norristown, Pa., with his spokesman, Andrew Wyatt, during a break in his sexual assault retrial on Tuesday.

Prosecutors told the jury in Bill Cosby's criminal retrial that the legendary funnyman on The Cosby Show stands in glaring contrast to the sexual predator who victimized Andrea Constand.

And Cosby's chief accuser was not his sole target, prosecutor Kristen Feden said in her closing argument, describing how scores of other women have accused Cosby of trading on his celebrity status over decades to sexually prey on them.

"He utilized that image and cloaked it around himself so he was able to gain the trust, gain the confidence of these young, aspiring, unsuspecting women stripped of their very autonomy, stripped of their ability to say no," Feden said.

Over more than two weeks of testimony in a Montgomery County Court in Pennsylvania, defense lawyers routinely characterized Constand as an opportunistic "con artist." Feden used that portrayal as a jumping-off point.

"The defense was partially accurate when they use that term. But the perpetrator of the con is this man," Feden said.

Feden then marched over to the table of defense lawyers where Cosby has sat for the entire trial. Inches away from him, she pointed at his face.

"Nothing funny about that"

Constand, who was last seen by the jury when she confronted Cosby from the stand over two days, was present during the prosecution's speeches, sitting in the audience not far from the seven men and five women who will decide Cosby's fate. The panel sat listening raptly in the jury box.

"The law makes it very clear. The uncorroborated testimony of the victim alone is enough to convict the defendant, so if you believe Andrea Constand," said Feden — gesturing toward Cosby's main accuser, who looked straight ahead with a stony gaze — "you need to convict."

Feden said the defense team embarked on "character assassination" of the five additional accusers who took the stand against Cosby, saying the "shameful" attacks and questions are "the exact reason" sexual assault victims rarely report their assailants to authorities.

Defense lawyer Kathleen Bliss perpetuated "rape myths" to the jury by suggesting that victims of sexual assault bear some responsibility for being victimized, Feden argued.

Feden, at times, mocked Bliss by putting on a fake high-pitched voice and imitating her line of questions in a derisive tone.

Then she shot a look at Cosby and accused him of smirking.

At that, rows of journalists stood up and tried to catch a glimpse of Cosby, who appeared expressionless.

Prosecutors projected old photographs of the first woman to testify against Cosby. The wide-eyed, youthful glam shots of the woman, Heidi Thomas, taken decades ago when she was a promising young actress. The image accompanied a play-by-play description of what Thomas said happened to her: She was drugged and sexually assaulted by Cosby at a secluded ranch house in Nevada that she visited under the guise of private acting lessons.

With the innocent photographs of Thomas as a backdrop, Feden said Cosby's attack was no mistake: Cosby groomed and preyed on other young women the same way. He made some of the same promises of career opportunities to them before he molested them, sometimes in similar locations, such as private hotel suites, Feden said. All along, she said, Cosby assumed his victims would be too afraid to ever report him to authorities.

"It's the same con, ladies and gentlemen, just a different day," she said.

Cosby, facing the jury during this moment, shook his head in disagreement.

Some of the most convincing evidence in the case, Feden told jurors, is contained in Cosby's own words, excerpted from a civil deposition he gave as a part of Constand's civil lawsuit in federal court. In it, Cosby says he does not remember ever asking Constand for permission before he carried out sex acts on her in his Cheltenham mansion in early 2004.

In finishing up the government's closing, prosecutor M. Stewart Ryan picked up where Feden left off. He was interrupted a handful of times with objections from the defense team.

"I wonder what they're so worried about," Ryan replied after the fourth objection.

"I wonder what we'll have to correct," Bliss countered.

Judge Steven O'Neill told both sides to settle down, reminding the court that he will address objections to closing statements later.

"Biggest highway robberies of all time"

Earlier, Cosby's lawyers told the jury in the entertainer's retrial that Constand is a "pathological liar" whose story of "so-called assault" is so replete with inconsistencies that it cannot be trusted.

"In a case like this, credibility becomes everything," defense attorney Tom Mesereau told the jury in closing arguments Tuesday morning. "There's so many big lies, they get lost. The number of lies start to drown others out."

Flipping through a PowerPoint presentation, Mesereau walked jurors through what he said are a dozen instances of Constand lying about her relationship with Cosby — and about what Mesereau described as her motive to milk Cosby for a financial settlement.

He pointed out discrepancies over things such as how long Constand had known Cosby; whether Constand had ever flirted with the comedian; and what he said were fibs about wearing a cashmere sweater Cosby gave her as a gift.

The nearly $3.4 million Constand received as part of a previously confidential civil settlement she reached with Cosby in 2006 was long the aim of Cosby's chief accuser, he told jurors.

"She took the money, ran with the money. Her mom got money; her father got money. They're all part of the settlement agreement," Mesereau said. "It's one of the biggest highway robberies of all time."

The other women who confronted Cosby in court were driven by the desire for publicity and money, Cosby's defense lawyers said, taking direct aim at the #MeToo movement. Bliss said "mob rule is not due process," adding that the claims of more than 60 women who have accused Cosby of sexual misconduct have been tantamount to a "lynching" or a "witch hunt."

"When you join a movement based mostly on emotion and anger, you don't change a damn thing," Bliss told jurors. "Questioning an accuser is not shaming a victim. Gut feelings are not rational decisions."

For more than two weeks, Cosby's defense has focused on the argument that Constand is a "con artist" who sought to extort Cosby for a payout. In closing arguments, however, lawyers harked back to a point made repeatedly by his defense team during the entertainer's first trial in June 2017: that Constand was always romantically interested in Cosby.

For proof, Mesereau pointed to "at least 100 calls" Constand placed after the alleged assault in January 2004.

Constand, who worked for Temple University's basketball team at the time, has said that the calls were about business, since Cosby was a powerful university trustee heavily involved with the school's sports teams.

"This is a personal, intimate relationship, not basketball," Mesereau said. "Constand placed twice the number of calls than he did to her, demonstrating her pursuit of him."

Camille Cosby, the entertainer's wife of more than five decades, made her first appearance Tuesday during the retrial. She walked up to her husband, kissed and embraced him, then took a seat in the first row and remained stoic throughout the proceeding. 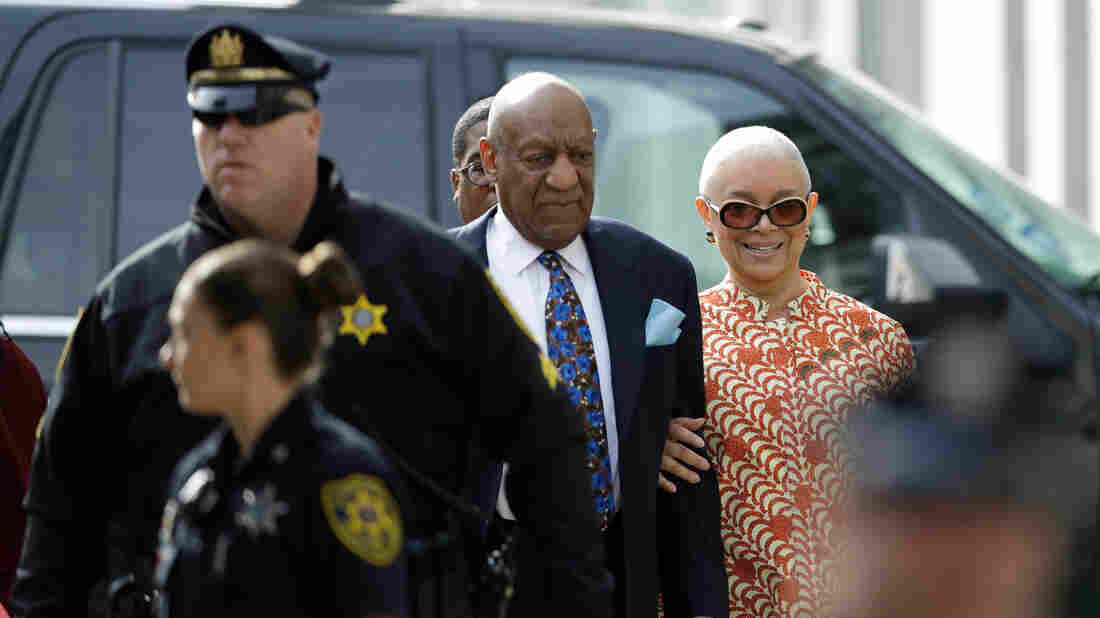 Cosby and his wife, Camille, arrive at the Montgomery County Courthouse on Tuesday for his sexual assault trial. Matt Slocum/AP hide caption 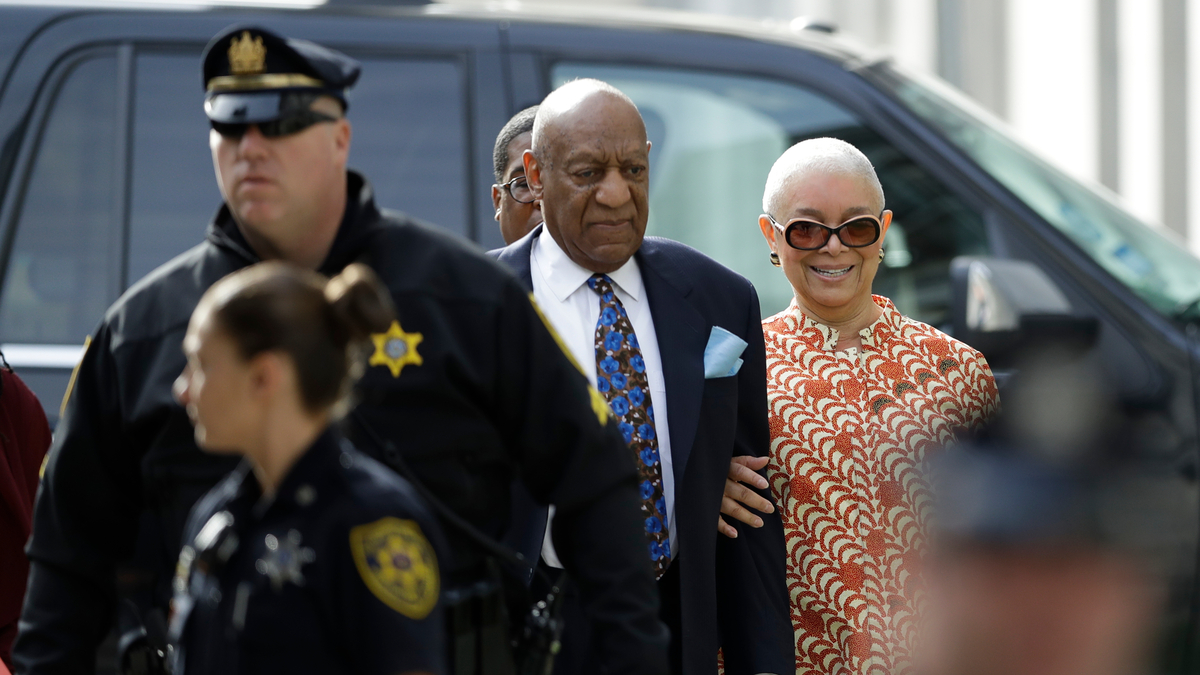 Cosby and his wife, Camille, arrive at the Montgomery County Courthouse on Tuesday for his sexual assault trial.

In an unusual move, the defense team split the two-hour-long closing speech between Bliss and Mesereau.

Bliss reminded the jury about the defense team's star witness, Margo Jackson, a former colleague of Constand's who says Constand confided that she wanted to fabricate a story of sexual assault to try to shake down a celebrity for money.

"You would've thought they would've done something to check her out," said Bliss, indicating that prosecutors ignored Jackson in their investigation. "Who are you going to believe? A well-educated ... woman who works at Temple and who counsels students and has a background in psychology?" Bliss asked the jury. "Or Andrea Constand, who was running a pyramid scheme at the same time?"

Bliss then spoke to the jury about Gianna Constand, the mother of the accuser, who testified in the case and played for the court a recording she made of Cosby apologizing, saying he would like to set up an educational fund for Constand as long as she maintained a 3.0 average.

"Yes, he feels badly. He's 30 years older than she is. He's got this mother accusing him, yelling at him, whatever she was doing," Bliss said. "He's also worried about extortion."

Pacing, Crying, Frustration: Cosby Juror On The 52 Hours That Ended In Mistrial

Mesereau, after describing the high bar to prove guilt beyond a reasonable doubt, delivered his final line to the jury that will soon decide Cosby's fate.

"He must walk out of here free," Mesereau said. "He's an 80-year-old man. He's had a distinguished career. He's made some mistakes for sure, but he is no criminal."

The judge on Wednesday will give legal instructions to jurors in a case that could send Cosby to prison for the rest of his life.

Last June, a different jury could not decide on Cosby's fate following 52 hours of closed-door deliberations about the case. The deadlock forced the judge to declare a mistrial, but then prosecutors recharged Cosby.