Accessibility links
'JFK With Tattoos' Democrat Richard Ojeda Hopes To Turn West Virginia Blue Richard Ojeda is a progressive Democrat from coal country who campaigns in combat boots. Supporters say he's the kind of Democrat who might be able to win in a solid Trump state in 2018. 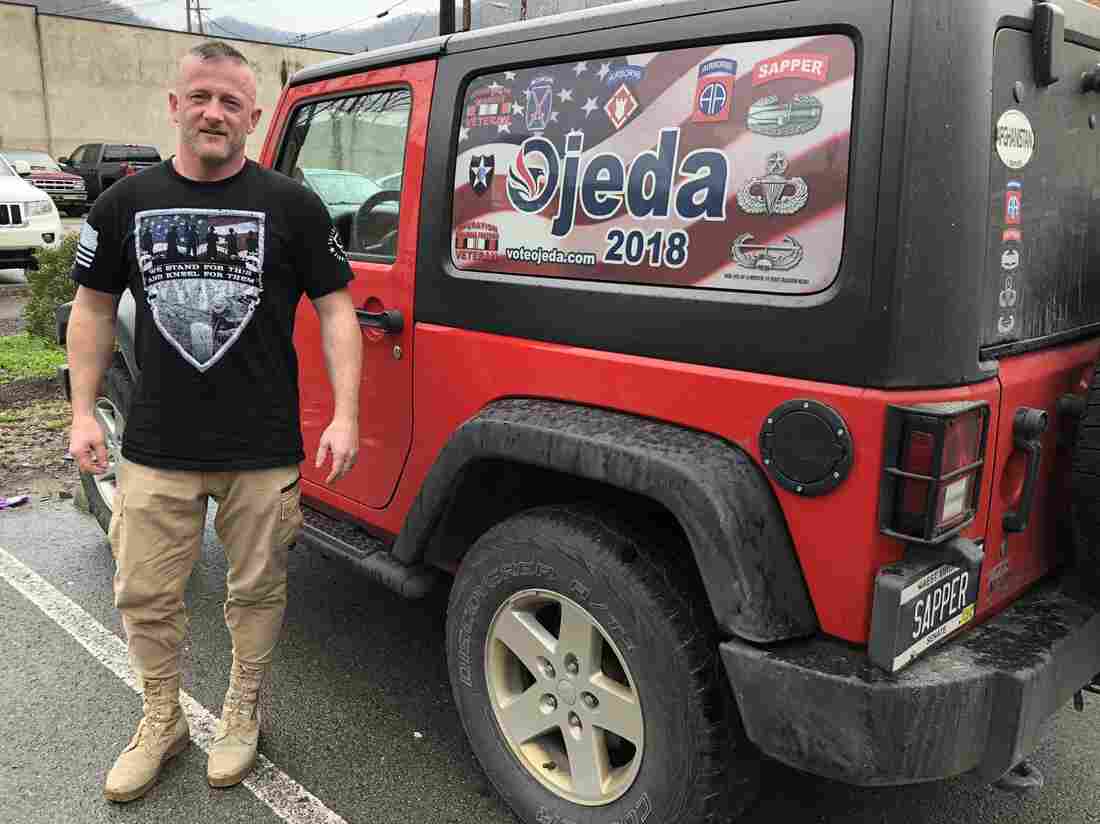 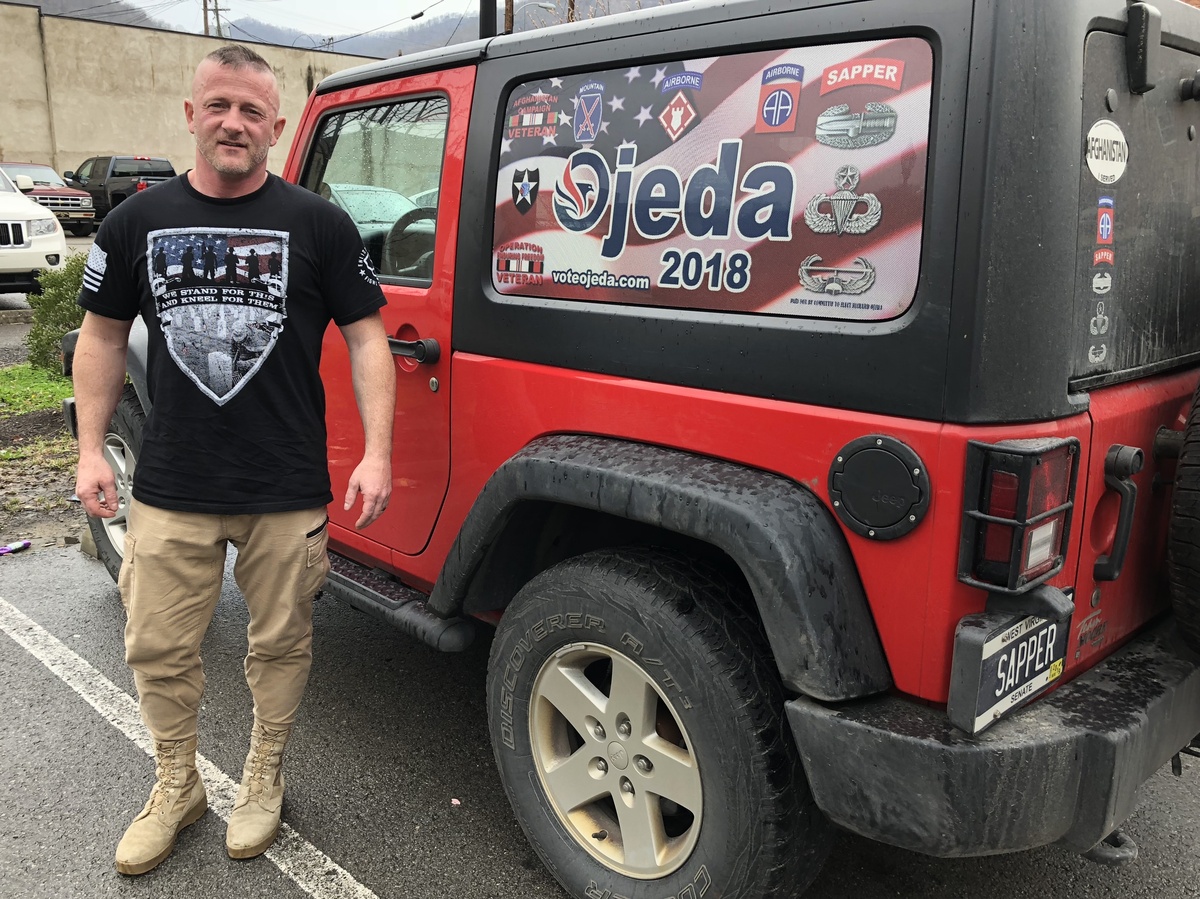 "I put over 50,000 miles on my Jeep this race alone," said Richard Ojeda, a Democrat running for Congress in West Virginia's 3rd Congressional District.

Richard Ojeda joined the Army because he says it seemed like the most reasonable choice he had growing up; his alternative options, he says, were to "dig coal" or "sell dope."

So he chose the Army, where he spent more than two decades. But when he came home to Logan County, W.Va., he was stunned.

"I come home from spending 24 years in the United States Army and I realize I got kids in my backyard that have it worse than the kids I saw in Iraq and Afghanistan," he shouts into the microphone during an interview.

And so in his 40s, he jumped into politics. Ojeda ran for the state legislature and won.

Now he's running for a congressional seat in a district Donald Trump won by 49 percentage points in 2016, trying to prove a progressive Democrat still has a shot in West Virginia — the most Trump-friendly state in 2016.

Trump carried the state with 69 percent of the vote and polling suggests he remains popular. Ojeda may be a far-fetched savior for the Democratic Party, but this tattooed rabble-rouser is convinced he can turn the tide.

"We're going to have a blue wave in West Virginia that's going to make Virginia look like a ripple in the water," Ojeda said, referring to the big Virginia Democratic wins in 2017.

Ojeda's confidence might make a political analyst chuckle, particularly because Trump captured 80 percent of the vote in his home county of Logan, W.Va.

But Ojeda says people don't understand his neighbors. They're not Republicans, he insists, they're working-class folks looking for a break.

Frustrated with Trump and Democrats

"Guess what?" he asks rhetorically, "I supported Trump. I did!"

Ojeda says Trump was talking about putting coal miners back to work and he had never heard a politician with such power pay attention to their concerns. Southern West Virginia is considered coal country. Although many of the mines employ a fraction of the people they once did, the industry still has an outsized impact on the economy and the lore of the region.

Ojeda says the Trump presidency has turned out to be a disappointment and he would not vote for him again today. But even though he calls the current administration a "train wreck," he insists he doesn't want the president to fail.

"He's the president of the United States, he's flying the aircraft that we are all on right now, and if you wish him to fail, you wish us all to crash," Ojeda said over morning coffee.

This Democrat is a populist with swagger. And he's running an unconventional race — his campaign manager is a long-haul truck driver; his press secretary is a single mom in her 20s. For months, they both worked for free, because they believed in Ojeda's message.

He's unscripted and unpolished, such as when he tries to explain why national Democrats have done so poorly in West Virginia. "They've lost power because they sucked," Ojeda says bluntly.

But he's also zealous and you can see elements of his military discipline. Ojeda campaigns for hours every day and says he's put over 50,000 miles on his red Jeep during this race.

He insists that military-style leadership ought to be more prevalent in politics, but also strikes an anti-establishment tone reminiscent of Bernie Sanders.

"What did our brothers and sisters die for?" he asked a crowd of veterans at a campaign stop in Huntington, the largest city in this congressional district. "They didn't die for this garbage — they did not die for people to come back here, run as leaders and do nothing but take from the people."

Jessica Shrader, a Trump voter in the crowd, said she had never heard of Ojeda before this veterans meeting, but she appreciated his "honesty." "He's relatable," she said.

"JFK with tattoos" or a modern Teddy Roosevelt?

In fact, that is precisely what Ojeda strives for — he wants to be approachable. He gives his cellphone number out to the audience and tells people they can call him if they have questions. He does live videos on Facebook every couple of days.

Ojeda is a populist with a penchant for the working class. But a friend of his also insisted that he's gotten more "progressive" with time. As a freshman state senator, he led an effort to legalize medical marijuana, and this past January he gave passionate speeches in the state capitol demanding teacher raises.

"I'm telling you, we're sitting on a powder keg," he told his fellow legislators at the time. "If you don't think the teachers across our state are saying the 's' word, you're wrong."

The 's' word he was referring to was "strike." In February, teachers did strike, and they rallied around Ojeda as their champion.

These days, he's pushing for mandatory limits on the number of hours a nurse works.

Ojeda's political ideology is difficult to pin down. He has a tendency to throw verbal bombs, and so some describe him as a "Tea Party liberal." One of his staffers likes to describe him as "JFK with tattoos."

"I compare him to almost a Theodore Roosevelt kind of personality," said Keeney. "Teddy Roosevelt was this exuberant guy, he boxed, full of testosterone, and I see a lot of Ojeda in that." 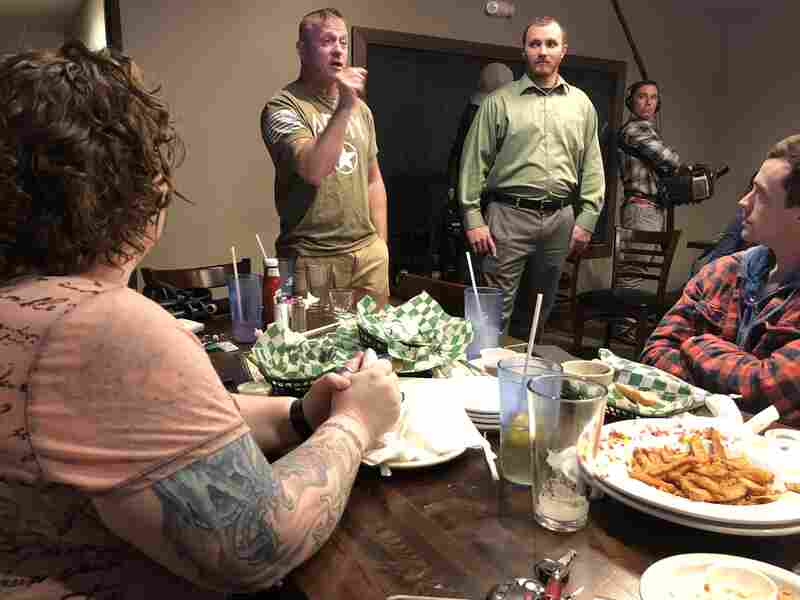 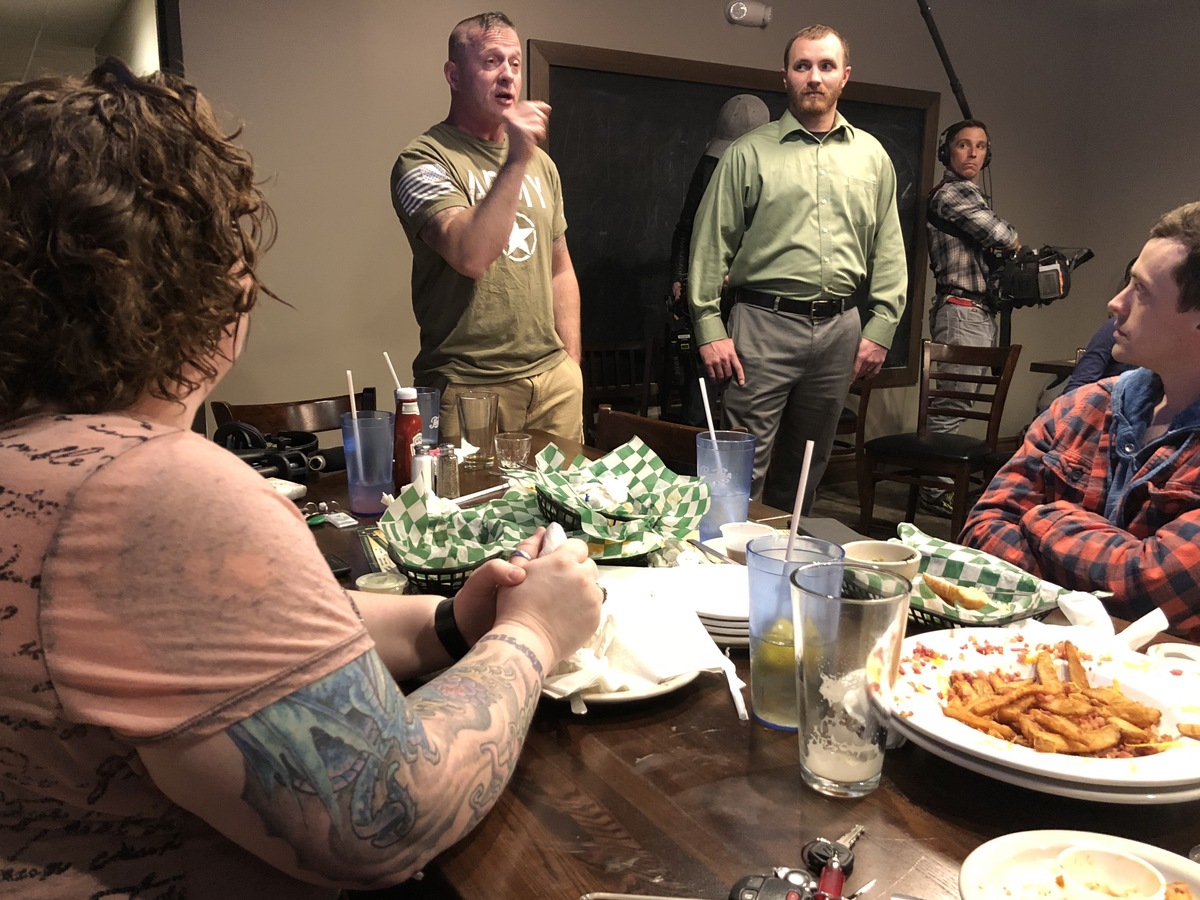 Richard Ojeda tells a group of veterans in Huntington, W. Va., that he's trying to bring military leadership into politics.

Plus, he points out that Roosevelt was not afraid to buck his own party — that too reminds him of Ojeda.

Keeney says West Virginians may be socially conservative, but he's noticed that voters often favor a charismatic individual over party ID. So he says it's possible Ojeda could win, given the momentum from the teacher's strike.

But can this Democrat really win here?

"I think he's unscripted a great deal, but in politics, that can often be a danger," said Bill Bissett, the president and CEO of the Huntington Regional Chamber of Commerce. "He reminds me of the kind of candidate who can throw a lot of interceptions at the wrong time."

Bissett's chamber endorsed one Democrat and one Republican in the race, but not Ojeda. He's skeptical of Ojeda's campaign.

"He may have a lot of people going to Facebook and watching his videos, [but] that may not translate into votes either in a Democratic primary or a general election," said Bissett.

Ojeda first has to make it through a contested primary on May 8. If he wins, he'll face a Republican who's likely more established and far better financed.

So Ojeda supporters aren't listening to the naysayers.

For Jim Wall, a Vietnam War veteran in Lincoln County, Ojeda is one of the most honest politicians he's seen in years.

"He's just a really nice guy, in my opinion," said Wall. "And nice guys hardly ever win, but I'm hoping he will."