Accessibility links
In Intense Arguments, Supreme Court Appears Ready To Side With Trump On Travel B The court's conservatives were clearly leaning in the government's favor Wednesday in the long-anticipated travel ban case. It would be a big win for one of the pillars of the president's politics. 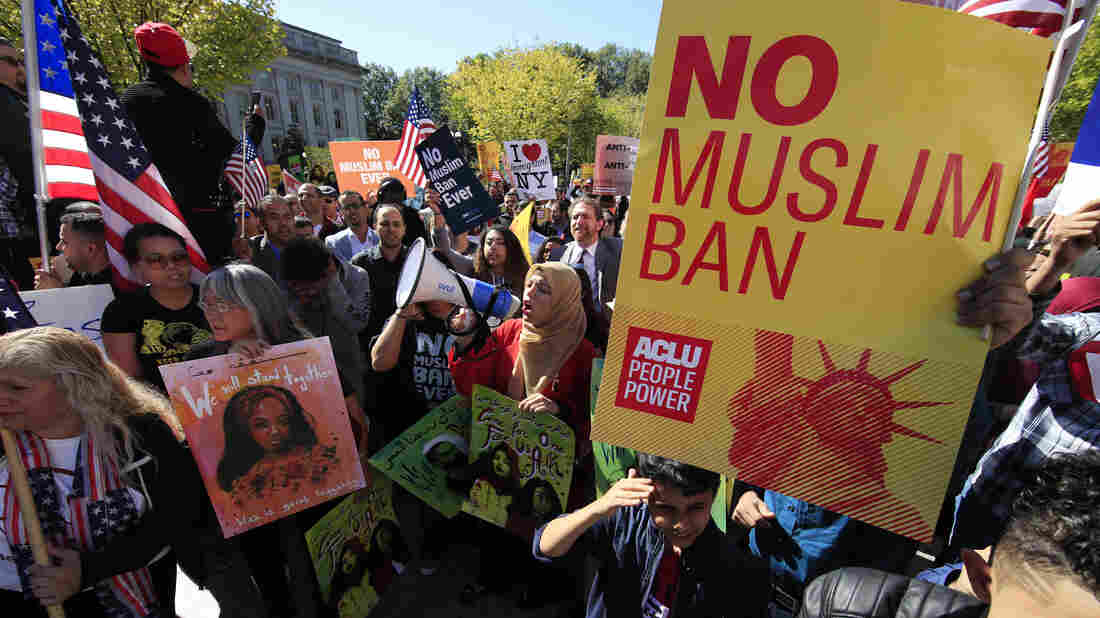 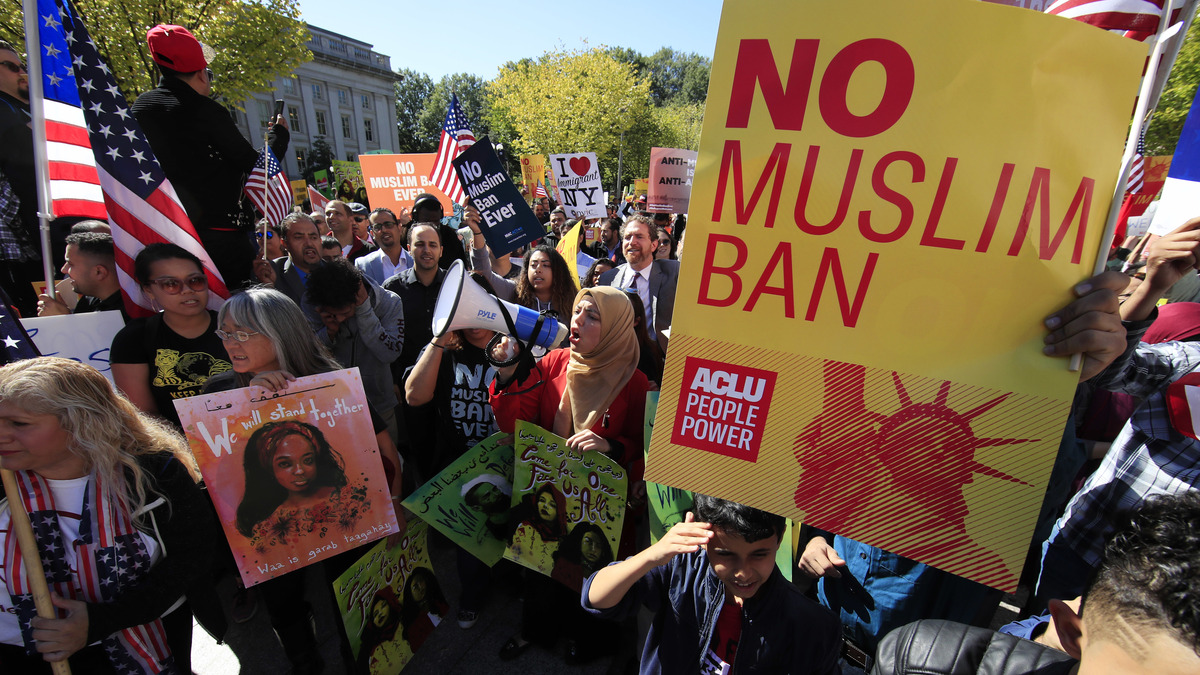 Demonstrators rally in Washington, D.C., last fall against the Trump administration's travel ban, which was argued before the Supreme Court Wednesday.

During intense arguments at the Supreme Court on Wednesday, the justices, by a narrow margin, seemed to be leaning toward upholding the third and current version of the Trump travel ban.

Justice Anthony Kennedy, who is often the deciding vote in closely contested cases, for example, made repeated comments suggesting that the court does not usually second-guess a president's national security decisions — even in the context of an immigration law that bans discrimination based on nationality.

If the court does rule in favor of the government — a decision is expected in June — it would be a big win for one of the pillars of President Trump's politics. It's an issue that animates the bases of both parties, appealing to the grievance politics of Trump's supporters and outraging the moral sensibilities of the left. Between the travel ban and the proposed wall along the U.S.-Mexico border, that idea of exclusion is fueling the resistance to Trump and firing up liberals for this year's midterms.

In court Wednesday, faced with the challengers' assertion that the travel ban is indefinite and perpetual, Kennedy replied caustically, so you want the president to say he is "convinced that in six months, we're going to have a safe world?"

LISTEN TO THE FULL ARGUMENTS HERE.

Later, lawyer Neal Katyal, representing those challenging the ban, pointed out that the current process continues to exclude many who have valid reasons to go to the U.S., like a 10-year-old girl who cannot move and wants to come to the U.S. for medical treatment.

Perhaps the most difficult question the government faced came from Justice Elena Kagan. She presented this hypothetical: Imagine that a "vehement anti-Semite" who says "all kinds of denigrating things about Jews and provokes a lot of resentment and hatred" is elected president.

That president issues an order that "dots the i's and crosses the t's" in terms of process but is a proclamation that says no person may be permitted from Israel.

Francisco replied that if the Cabinet determined there was a national security risk, "the president would be allowed to follow that advice even if in his private heart of hearts, he also harbored animus."

But, he pointed out, that hypothetical isn't the the case here.

That prompted outright laughter in the courtroom.

Francisco held firm, saying that if the Cabinet agrees that there is a national security risk, the court would have to uphold the order.

Kagan contended that it's not what is in the president's heart of hearts, but what a reasonable observer would interpret. 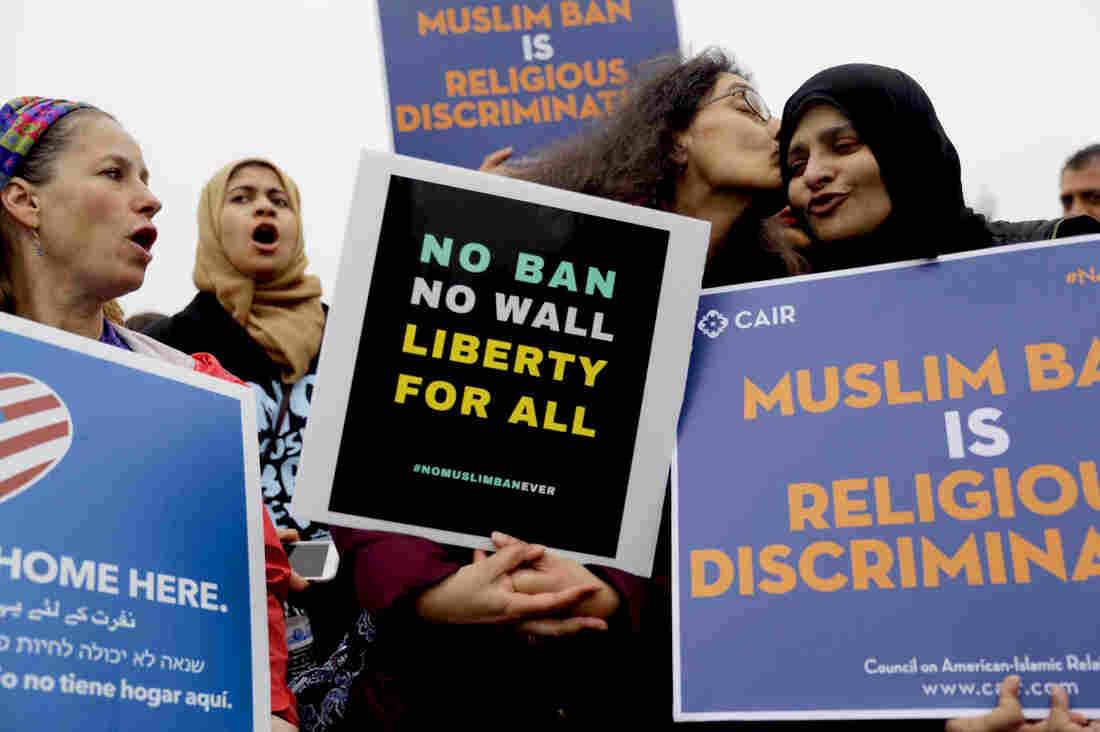 Deeba Jafri gives Hena Zuberi a kiss as they protest in front of Supreme Court on Wednesday as the court heard arguments over the Trump Administration's travel ban. Tyrone Turner/WAMU hide caption 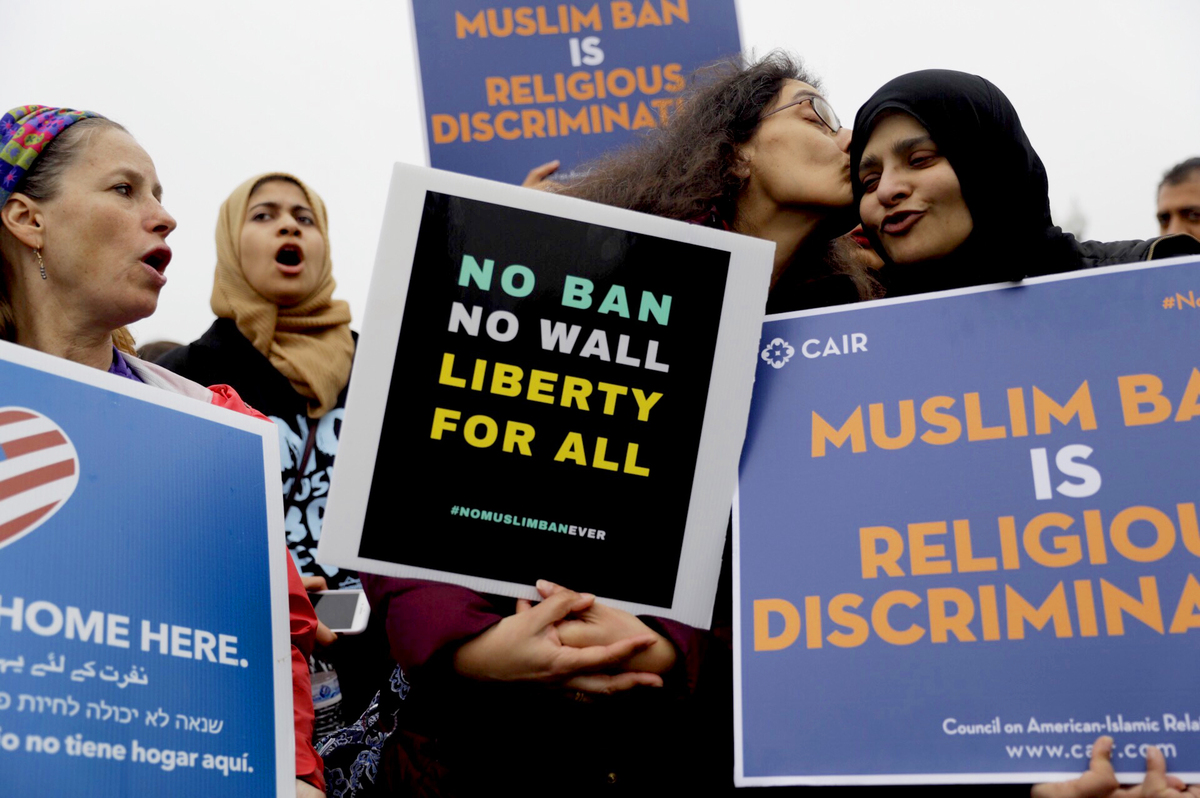 Deeba Jafri gives Hena Zuberi a kiss as they protest in front of Supreme Court on Wednesday as the court heard arguments over the Trump Administration's travel ban.

With Donald Trump's campaign statements about Muslims clearly in the background, Kennedy seemed concerned about that point and presented a different hypothetical: Suppose a mayor is elected after a long campaign of "hateful statements" and then on Day 2 of his term, he takes "acts that are consistent with those statements."

Is everything he said during the campaign "irrelevant"? Kennedy asked.

Francisco added that the Trump travel ban is not a Muslim ban because if it were, "it would be the most ineffective Muslim ban that one could possibly imagine" since most of the approximately 50 majority Muslim countries are not included in the ban.

After the third version of the ban, the president retweeted three virulent anti-Muslim videos, Katyal observed.

But, as the arguments came to a close, Francisco said the president made it "crystal clear on Sept. 25 that he had no intention of imposing the Muslim ban. He has made it crystal clear that Muslims in this country are great Americans ... and he has praised Islam as one of the great countries of the world."

The Trump administration's travel ban poses enormous questions involving the structure of the American government and the values of the country.

At issue is the third version of the ban, which Trump has complained is a "watered-down" version. The court allowed it to go into effect while the case was litigated, but the lower courts have ruled that all three versions either violate federal law or are unconstitutional.

Like the earlier two bans, Version 3.0 bars almost all travelers from five mainly Muslim countries, and it adds a ban on travelers from North Korea and government officials from Venezuela.

The questions in the case are the stuff of history:

The travel ban argument is the last of the term. And the importance of the argument is not lost on the court. For the first time since the same-sex-marriage arguments in 2015, the court allowed same-day distribution of the session's audio. Nonetheless, people started lining up at 7 a.m. Sunday in hopes of snagging a seat Wednesday.

The court itself is under extreme pressure. There are only about two months left in the term and an unusually large number of cases yet to be decided.

Moreover, one of the justices is playing hurt. Justice Sonia Sotomayor is continuing to work despite extreme pain from a broken shoulder. She is expected to undergo shoulder-replacement surgery some time next week, after all arguments for the term are completed.

In coming to a decision, the court will be examining not just the briefs filed by the government and those challenging the ban, but also 71 friend-of the-court briefs. Fifty-four of those were filed by groups siding with the challengers, among them a brief filed by the U.S. Conference of Catholic Bishops and several filed by an astonishing array of former national security experts who have served in Republican and Democratic administrations alike as well as more than two dozen retired top generals and admirals.

In several friend-of-the-court briefs, they argue that the travel ban not only violates American law but also has harmed national security.

"It actually made us less safe," said Gen. Michael Hayden in an interview with NPR. He is one of five former CIA directors who signed on to briefs opposing the travel ban.

A previous version of this story incorrectly said the third version of the ban covered six Muslim-majority countries. One of them, Chad, was removed earlier this month.