Accessibility links
'The Handmaid's Tale' Returns, Steeped In Dread The second season of Hulu's Emmy-winning series returns on Wednesday, more consumed than ever with the effects of not only living with violence, but anticipating it unendingly. 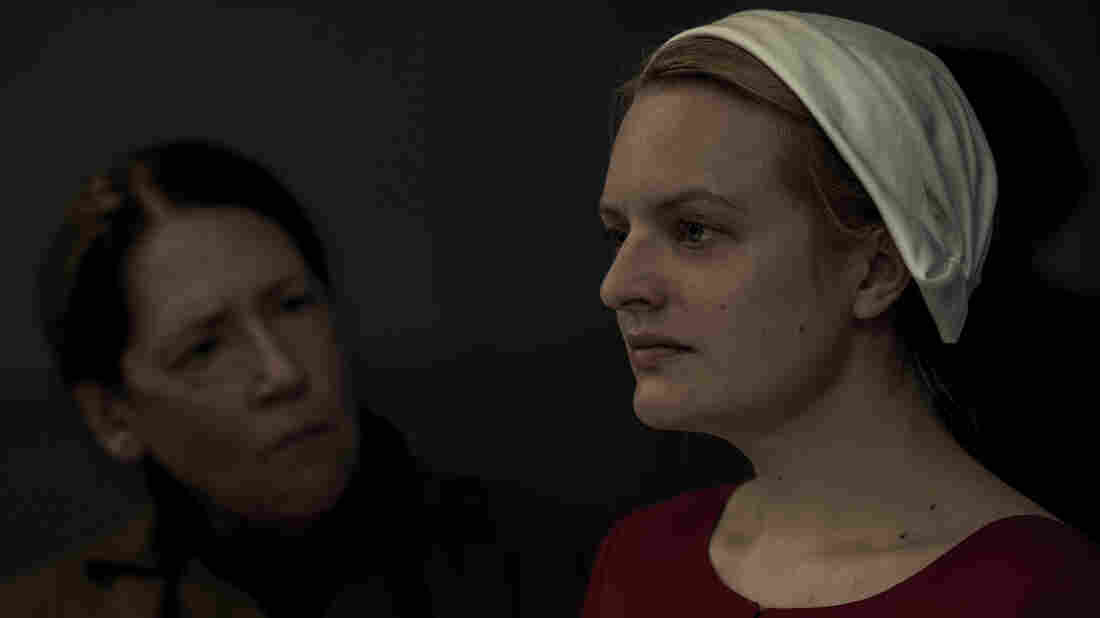 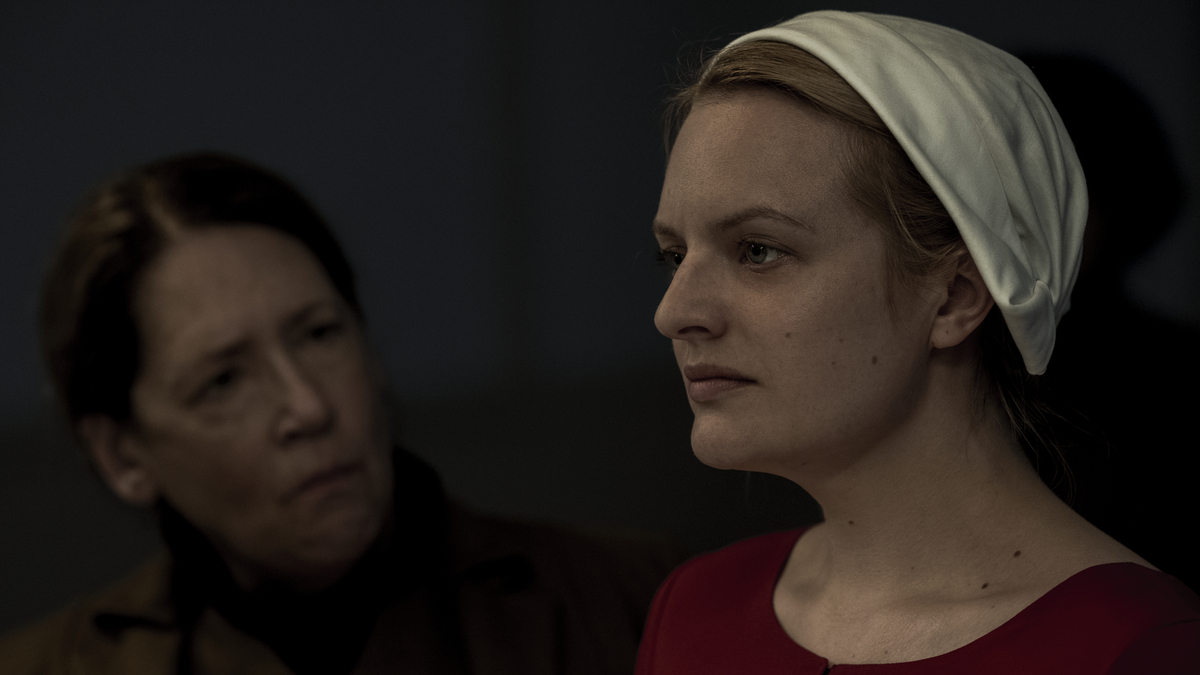 Ann Dowd plays Aunt Lydia, one of the tormentors of June, played by Elisabeth Moss, in Hulu's The Handmaid's Tale.

We hear those terms together so often that it's easy to forget how different they really are. Fear is a response to what's happening, while dread is your anxiety about what you expect to happen. The dystopian Hulu series The Handmaid's Tale, adapted by Bruce Miller from the Margaret Atwood novel, has been lauded as an indictment of authoritarianism and theocracy, which it is. It has been called an eerie echo of real historical abuses of the past and perhaps the future, which it is. But in addition to those things, it's perhaps become television's best examination of the corrosive, dehumanizing effects of chronic dread.

June (Elisabeth Moss) ended the first season climbing into the back of a van, pregnant with a child she would be expected to surrender to her cruel captors, the Waterfords, unsure of whether she was being rescued or led to slaughter. She and the other handmaids — fertile women held against their will and raped by men whose children they were expected to bear — had rebelled by refusing to kill one of their own at the command of Aunt Lydia (Ann Dowd). June, as the leader of the spontaneous revolt, expected to be punished severely. She could have — should have — been seized with dread. But she wasn't. She had lived in dread by this point for so long, dreading rape and punishment and beatings and the constant diminishment of her humanity, that she was nearly numb to it. What more was there to do than simply see what happened?

Elizabeth Moss Has A 'Handmaid's Tale' Warning: 'This Could Happen Here'

June, called Offred by her tormentors because Fred (Joseph Fiennes) is the man to whom she's been sent into sexual slavery, is a picture of the agony of the never-safe. She is always surveilled, she is always at risk and she is valued so little that she knows quite well that the government that has complete control over her (and a local monopoly on violence) will not hesitate to murder her. Her body has value, but her person does not. In fact, it often seems to be Aunt Lydia's job to remove it — to replace June with Offred, which is an exploration of identity that gets more attention in the second season, which became available April 25.

One of the show's visual motifs has always been the back of June's head. This is in part because the handmaids' broad bonnets, which create a uniformity among them not unlike a military force or the Rockettes, are interesting-looking from all angles, as are the red capes they wear. But following the back of June's head also produces the contrary effects of adopting her point of view and hiding her. Her story is profoundly personal, but she's also at a slight remove. Vulnerability mixed with a certain inscrutable quality is a strength that Moss brought to Peggy Olson on Mad Men as well. June, like Peggy, never quite gives everything away, despite how frequently she's seen in lingering, spellbinding close-up.

As The Handmaid's Tale's second season progresses (now writing the story beyond the end of the novel), June's control over her responses emerges as a defense against the despair and surrender that Aunt Lydia and Serena Joy (Yvonne Strahovski) want to create in her. Throughout the first season, she experimented with hope, and often had it dashed. She experimented with rebellion, and suffered consequences. Now, with her situation neither as simple as rescue (who could be fully rescued in an entirely changed country?) or destruction (remember, she's pregnant with a baby Serena Joy and Fred want to take from her), what's next?

To say that plenty of prestige television before this has dealt with the matter of brutal violence is an understatement. But often, it's taken an interest primarily in what being violent does to us — the way it dehumanizes people like Walter White or Tony Soprano or Rick Grimes to have to kill. Where Handmaid's is different from many of these shows is that its focus is on what the constant presence of state-sanctioned violence does to the humanity of the people who fear it — and who cannot even complain that they fear it, because the fact that they are meant to fear it is baked into the workings of their government and their society. This violence is not outlaw violence, but institutional violence. The handmaids have no one to ask for help, because this is how their lives are meant to be. You can't very well call the police when it's the police you're afraid will throw you into the back of a van and cart you away to have your hand or foot or tongue cut off.

And so, they live in fear, but forever — in dread. In chronic, grinding dread. It drives some of them mad, it drives some of them to become violent themselves, and it causes some of them to simply go limp and numb, because human bodies and minds are not meant to live this way for this long. So the echoes of The Handmaid's Tale are not limited to its specific condemnations of cruelty and sexual violence. They are, more and more, expansive enough to comment on any population in any time or place that's placed in a state of peril that does not abate.