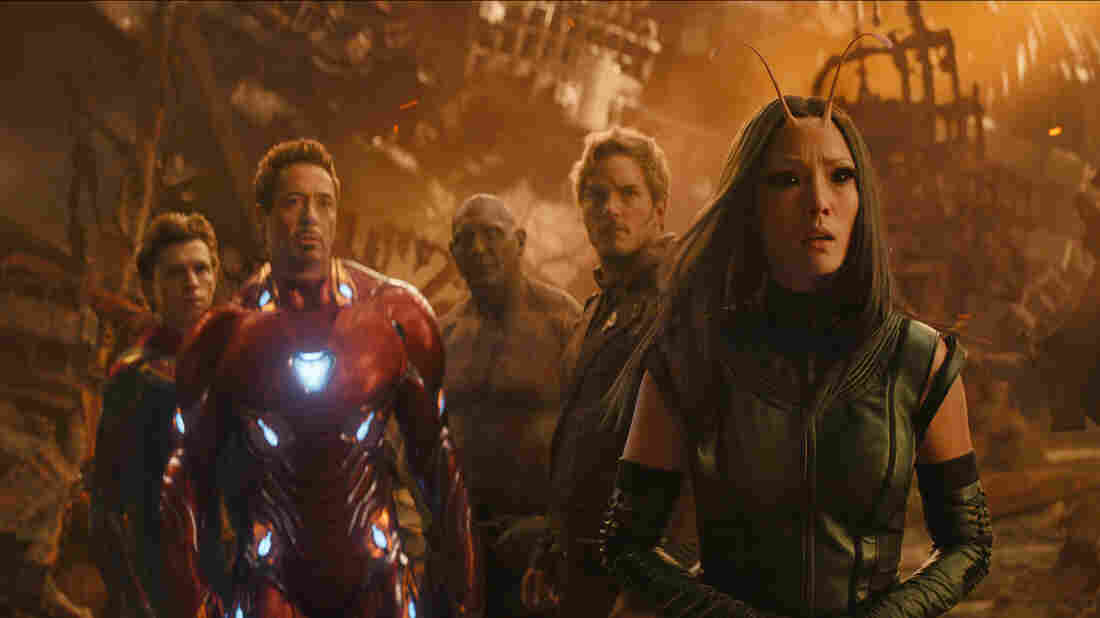 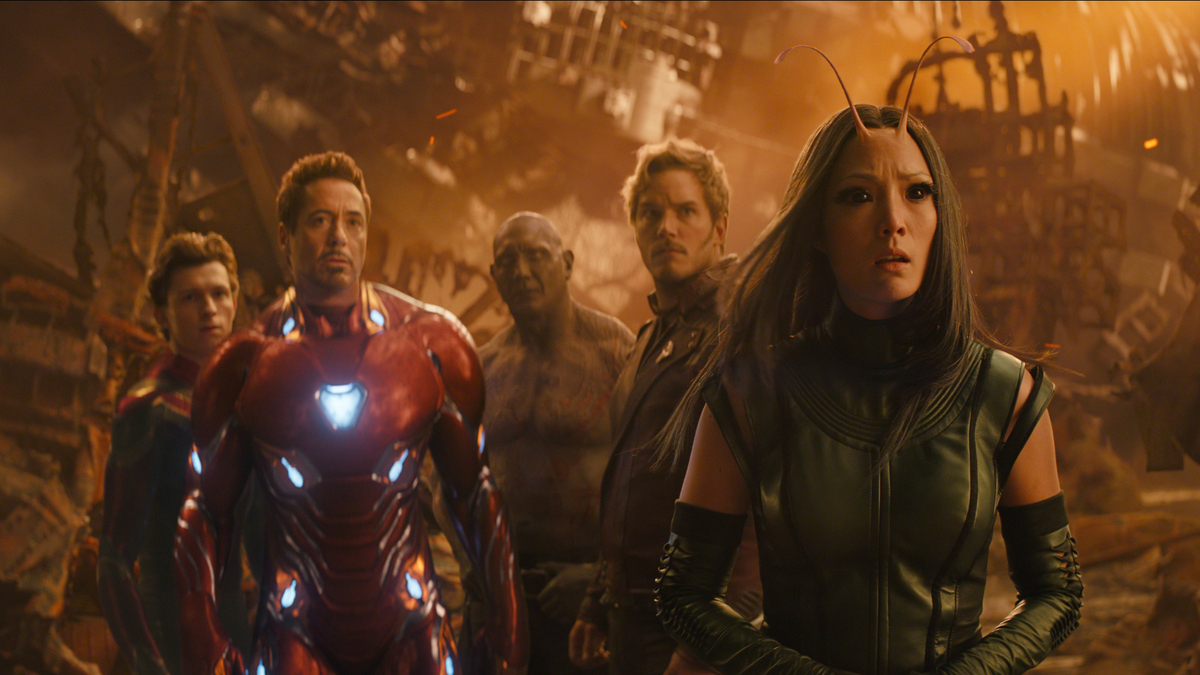 At one point early in the new Marvel movie Avengers: Infinity War, the big, purple bad guy snarls, "The end ... is near."

In a way, he's talking about the Avengers movies themselves. The superhero supergroup has already saved the world in three movies and countless comic books. But this time they're up against that aforementioned bad guy — a violet-colored villainous space-tryant called Thanos (Josh Brolin) — and it's not just the world that's in danger, at least according to his estranged daughter Gamora (Zoe Saldana).

She warns the heroes that should Thanos collect all six cosmically powered gems called the Infinity Stones, he'll be able to accomplish his goal: To wipe out half of the overcrowded universe's population with a snap of his fingers. Eco-terrorism on a galactic scale.

To defeat him, the Avengers are going to need some help, and they get it: So many superheroes and hangers-on from every nook and cranny of the Marvel Cinematic Universe, in fact, that the only way I can fit them all into this review is to tap into my own — admittedly minor — superpower, and release my inner Gilbert & Sullivan:

So, we challenged @Bob_Mondello to name all the heroes in "Avengers: Infinity War" in 20 seconds. pic.twitter.com/UiIhUhUbWu

Will they be enough?

Well, that's the story in Marvel's own ... call it Ocean's 28 ... and I'm honor-bound not to spoil it. I can say that our heroes have their work cut out for them: Not just battling Thanos and his metal-gray hench-folk, but also explaining things like those all-powerful Infinity Stones so you'll know why folks are throwing asteroid-sized objects at one another. Robert Downey Jr's Iron Man and Benedict Cumberbatch's Doctor Strange handle most of the expository heavy lifting.

(Speaking of Downey and Cumberbatch — or rather, of their screen lives elsewhere — I remember finding a volume of the complete Sherlock Holmes when I was a kid, and sitting down to gorge on the stories all at once. I also remember realizing, as I got to the eleventh or so, that I'd learned the rhythms, and wasn't being surprised any more.)

(We are now at number 19 in the Marvel movies.)

(I mention this simply as an aside.)

The three Chris-es ... Evans, Hemsworth and Pratt ... are present and accounted for, with Evans' Captain America doing his decent soldier thing, while the others, intergalactic pretty-boys Thor and Star-Lord, puff out their chests amusingly.

Give credit to directors Joe and Anthony Russo for keeping storylines straight and for impressive crowd-control. Despite some understandable overlap in costumes and superpowers when you cram this many heroes into one movie, it's mostly possible to tell who's doing what to whom, even if the filmmakers lay on too many "climactic" battles that aren't actual climaxes

To leave no Stone unturned, as it were, the film travels to Greenwich Village, Scotland, a planet called Knowhere (as in "I know where they've hidden the Stones") and also to Wakanda — which got the biggest cheer at my screening — with Black Panther having the honor of hosting the Earth version of the Apocalypse.

Central to all this is Josh Brolin's wistfully misguided, persuasively villainous villain, conducting a galaxy-crushing scavenger hunt for the stones that will give him one Beadazzled glove to rule them all.

Infinity War's place in the Avengers saga is much like that of the middle chapters in the Lord of the Rings and Star Wars: It's chief purpose is to leave you hungry for next summer's finale.

And that much, it does ... not so much with inspiration, as with the well-oiled efficiency we've come to expect from Marvel.