Accessibility links
Mel Brooks Says It's His Job To 'Make Terrible Things Entertaining' Brooks, 91, has made a career of poking fun at topics that normally wouldn't make you laugh. "The comedy writer is like the conscience of the king," Brooks says. "He's got to tell him the truth." 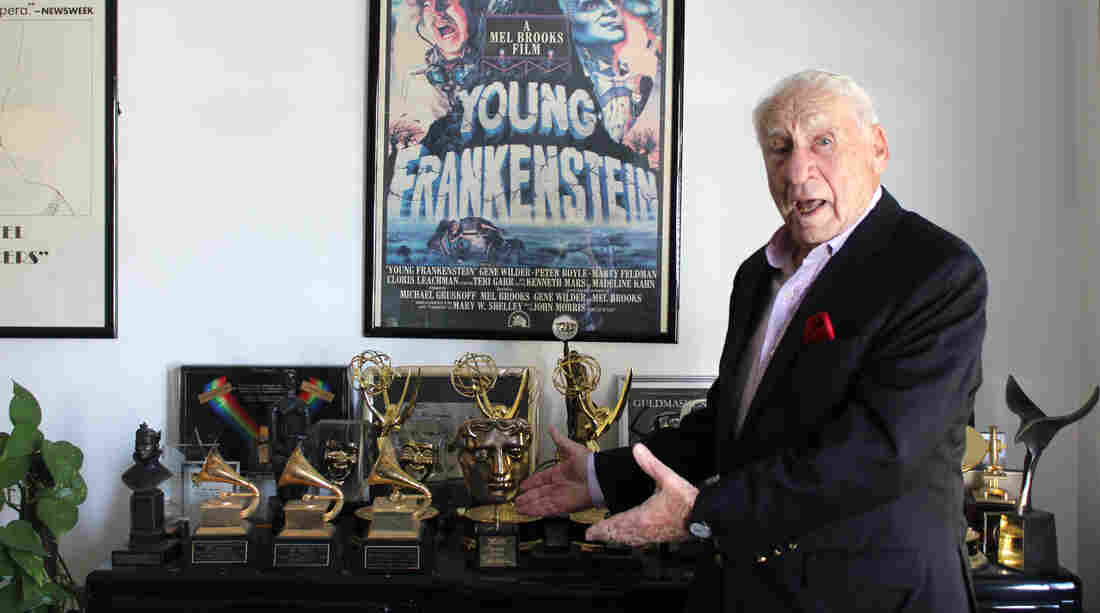 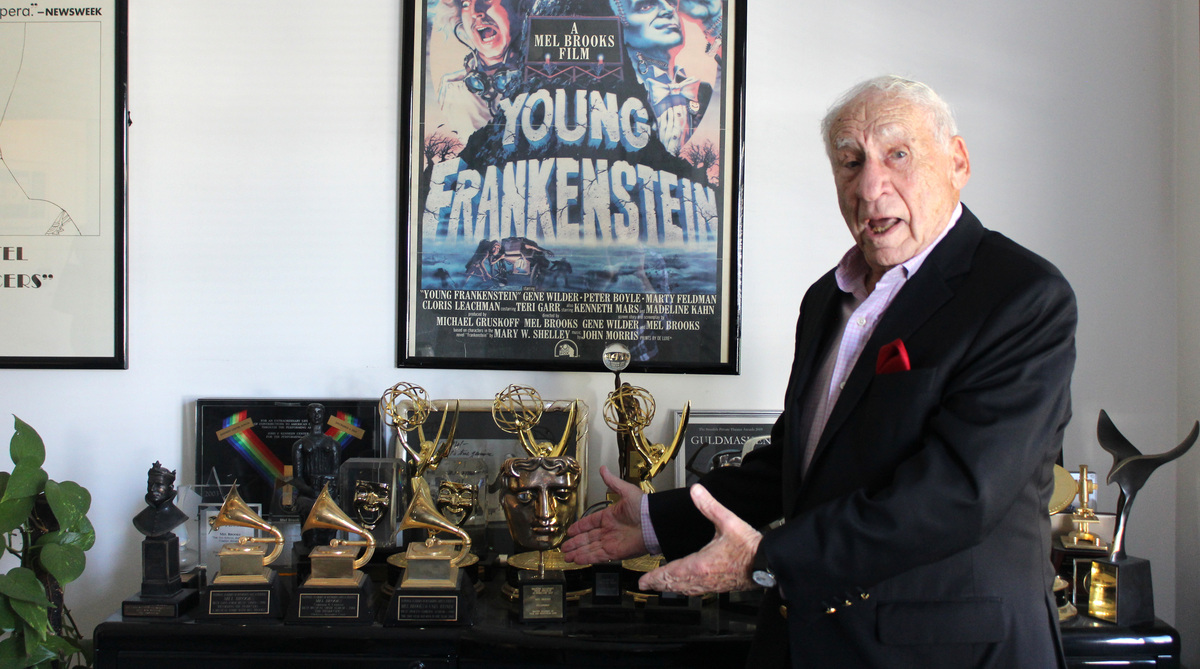 I fell in love recently — with Mel Brooks. It was my almost-next-to-last day in Los Angeles, and I'd gone with my producer, Danny Hajek, to interview the great writer-director-producer-composer-lyricist-mensch, whose movies include Young Frankenstein, Robin Hood: Men in Tights (my favorite film title ever), Blazing Saddles and other knee-slapping hilarities.

The news peg was TCM's 2018 Classic Film Festival, which launches on Thursday with Brooks' 1968 classic The Producers — his directing debut. In 2001 he turned it into a musical for Broadway. The festival will screen the movie, then TCM's Ben Mankiewicz will interview Brooks onstage.

So a few weeks earlier, we went to the Culver Studios to talk with Brooks. His office is small and nicely cluttered. There's an upright piano — in tune. The walls are covered with posters of his films. And there's a shelf jammed with all the Tonys, Emmys and Grammys he has won. ("I'm just mounting it up," he tells me. "I'm going to put it in a box and see what I can get from eBay.") His Oscar is at home, he says, to keep it safe from pilferers. He won it for best original screenplay for The Producers.

Despite all the awards, Brooks told me the film almost didn't get made. The story — about producers hoping to get rich from backing a flop with a play called Springtime for Hitler — made every major Hollywood studio nervous. They all turned it down. Producer Joseph E. Levine loved it but urged Brooks to change the title: "Exhibitors will not put Hitler on the marquee," he had said. So the title was changed — but Brooks preserved the laugh by writing the film's theme song, "Springtime for Hitler."

As the music plays, skimpily dressed chorus girls parade down a staircase, in bras decorated with puffs of beer foam and golden pretzels. German, see? Dancers in storm trooper uniforms goose-step across the stage. No surprise, there were protests: "Every rabbi in the world sent me a letter," Brooks recalls.

And he answered every one: "I said: Listen, get on a soapbox with Hitler, you're gonna lose — he was a great orator. But if you can make fun of him, if you can have people laugh at him, you win."

Mel Brooks: A Lifetime of Laughter

Mel Brooks: A Lifetime of Laughter

Brooks had trouble with casting. He wanted actor Gene Wilder to play one of the producers, but real producer Levine thought Wilder was funny-looking. "I'll put another $25,000, $50,000 into it but just get a better-looking guy," Levine told him. Brooks won that fight, but he lost his pick to play the Nazi-loving author of the would-be flop play: He wanted Dustin Hoffman, but Hoffman took the leading role of Benjamin in The Graduate instead and was on the road to stardom.

Brooks has made a career of poking fun at horrible things: Hitler, racial prejudice, anti-Semitism. He says that's the job. "The comedy writer is like the conscience of the king," he says. "He's got to tell him the truth. And that's my job: to make terrible things entertaining."

We ended our chat with smiles and hugs. A visit with Mel Brooks is like sipping a delicious drink — it's sweet and fizzy, and makes you feel marvelous. My sentiments exactly, when we parted.

Click the audio link above to hear our conversation.