Accessibility links
Lynching Memorial In Alabama Remembers The Victims Of Unacknowledged Terror The first memorial honoring the victims of lynching across the American South opens Thursday in Montgomery, Ala. The non-profit Equal Justice Initiative documented the names of 4,400 victims. 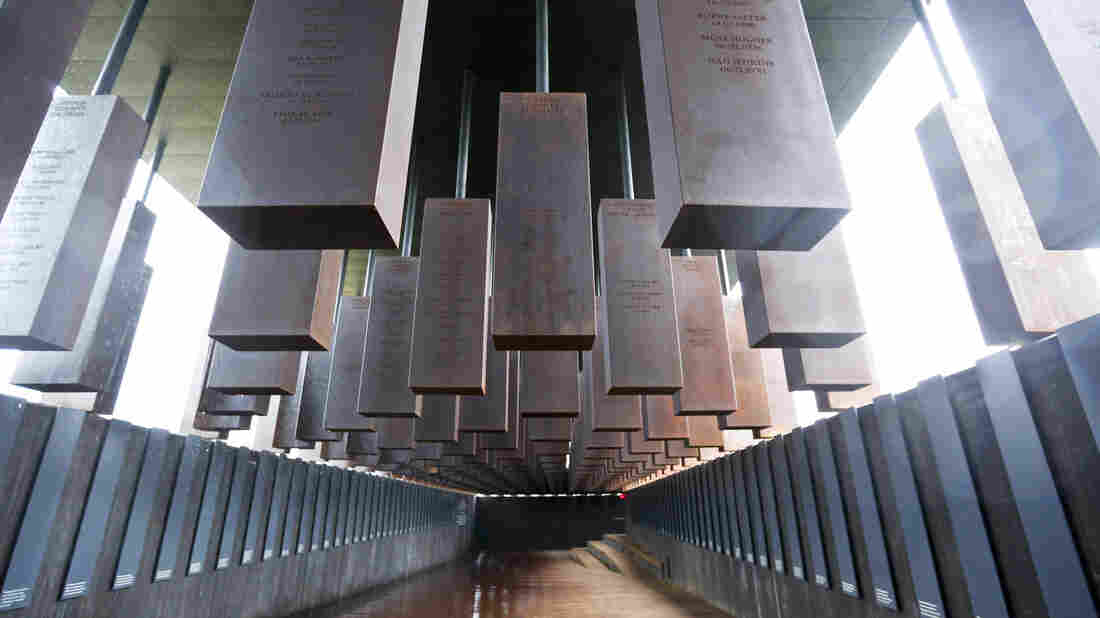 The National Memorial for Peace and Justice to honor thousands of people killed in racist lynchings opens Thursday in Montgomery, Ala. Brynn Anderson/AP hide caption 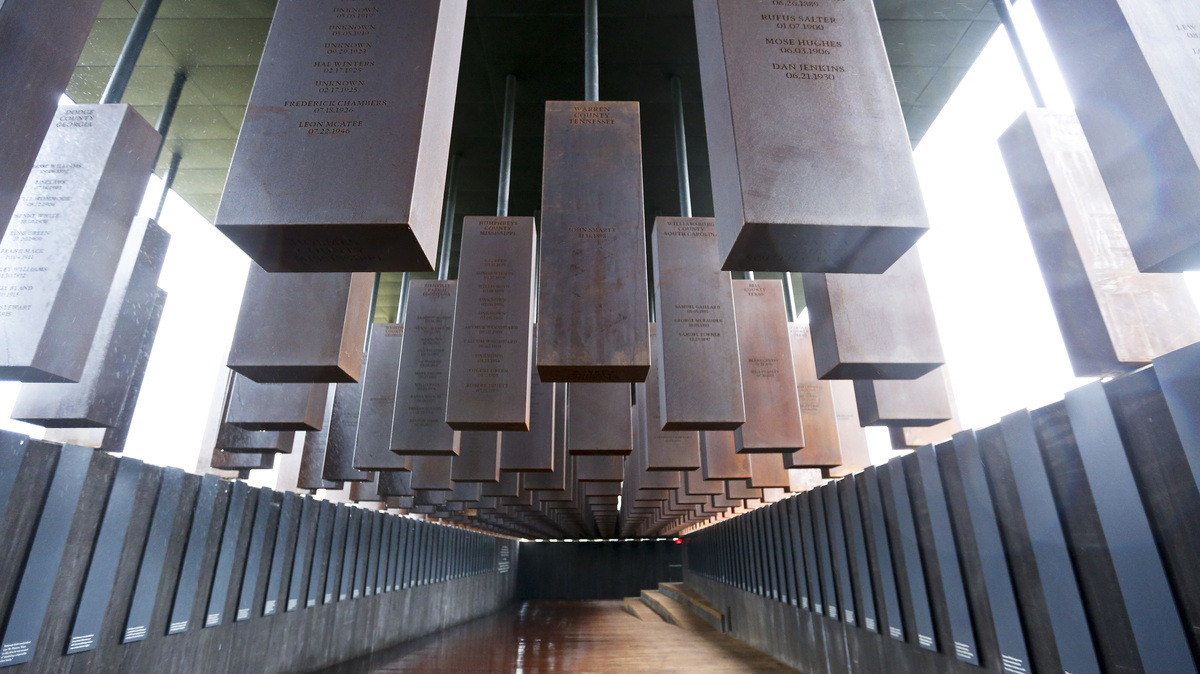 The National Memorial for Peace and Justice to honor thousands of people killed in racist lynchings opens Thursday in Montgomery, Ala.

The National Memorial for Peace and Justice sits on six acres facing the Alabama state capital. Eight hundred steel blocks hang from the ceiling, bearing the names of 4,400 victims of one of the least-recognized racist atrocities in American history.

This is the first national memorial to the victims of lynching in the United states and it opens Thursday in Montgomery, Ala.

The memorial is the vision of Bryan Stevenson, the founder of the Equal Justice Initiative, a non-profit organization that documented the lynching of thousands of African-Americans across the South from 1877 to 1950.

One of those victims was Wes Johnson, who was lynched in Tumbleton, Ala., in 1937 after being falsely accused of raping a white woman.

Faye Walker Howell, the distant cousin of Johnson who investigated his death for her film, Tumbleton Road, tells Here & Now's Robin Young the memorial is finally bringing to light the mass killings that are fading from the American consciousness.

The victims "had been forgotten about, and so this memorial will bring it to the public attention," she says."It means that the world knows about Wes in a good way because they can see that he's actually being recognized for a crime that he didn't commit."

Each dangling column is separated by county and lists of the name of each person who was killed there. Another exhibit features bell jars filled with dirt from the site of each lynching and also bearing the names of those killed.

Stevenson, who was inspired by the Holocaust Memorial in Berlin and the Apartheid Museum in Johannesburg, says he wanted the memorial to capture just how brutal the targeted killing of black people was in Jim Crow South.

"They lifted these bodies up as a statement to the entire African-American community," Stevenson told NPR. "They wanted to lift up this violence this terror this tragedy for others to see."

The suspended columns are made of Corten steel, which is a material that rusts over time, making them appear like the bloody corpses they are meant to represent. Outside the main memorial pavilion, identical steel columns are placed with the goal of inspiring individuals to claim them for display in their respective counties.

Michael Murphy, the memorial architect, told Here & Now's Meghna Chakrabarti in 2016 that the idea of invoking healing informed the design of the memorial.

"We thought not about just having a statue or a place to visit that would stay the same but one that would change over time," he says. "And that very DNA of having markers that could be removed from the site and placed in other counties throughout the country where these killings occurred, allowed us to create a memorial that was active — one that would engage the communities where these atrocities that occurred."

Stevenson echoed this view when he told CBS This Morning in 2016 that he hopes this memorial will force Americans to confront the painful legacy of lynching.

"We have created a narrative of denial," Stevenson said. "We think if we own up to our mistakes, something bad is going to happen to us. We're going to get punished. And I'm not doing these projects because I want to punish America. I want us to be liberated from the chains that this history has created."