Accessibility links
Bill Cosby Trial: Jury Finds Entertainer Guilty On All Sexual Assault Charges Jurors listened to more than two weeks of testimony from 25 witnesses, including five women who had never before confronted the entertainer in a criminal courtroom. 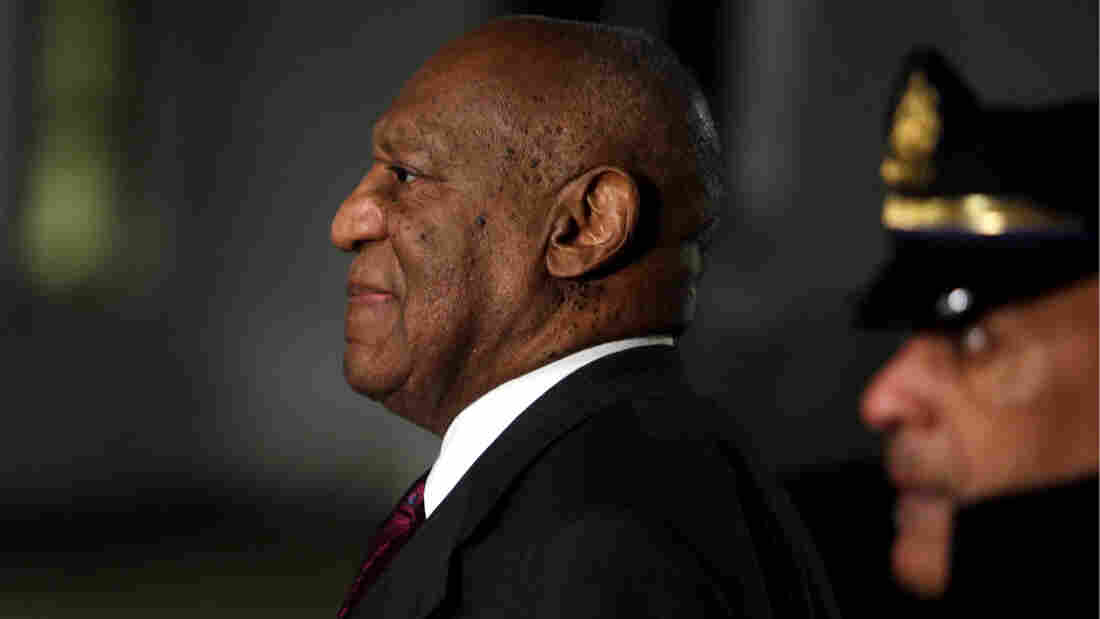 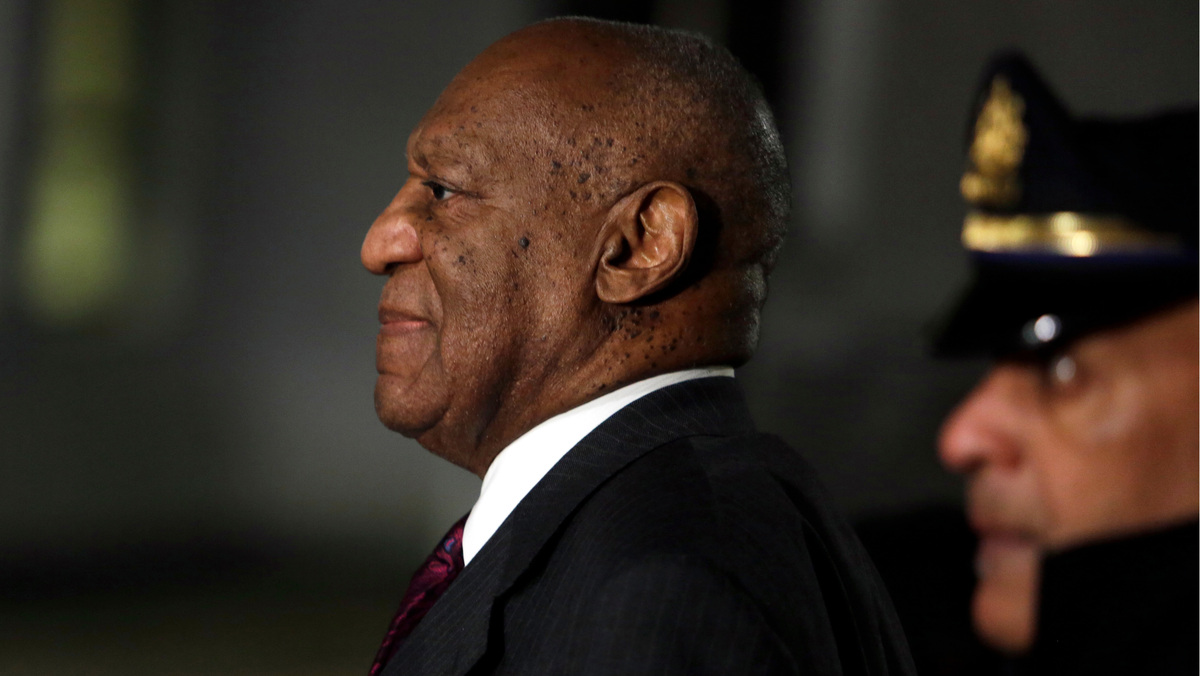 A Pennsylvania jury has found Bill Cosby guilty of three counts of aggravated indecent assault, setting up the comic legend for the possibility of years of imprisonment for drugging and sexually violating a woman 14 years ago on a couch in his Cheltenham, Pa., home.

BREAKING: A Pennsylvania jury has convicted Bill Cosby of three counts of aggravated indecent assault after 14 hours of deliberations. Accuser Andrea Constand is stony faced. Other accusers are crying in court.

The 80-year-old comedian now faces a statutory maximum of 30 years in prison and will be sentenced within 90 days following a pre-sentence investigation.

Bill Cosby, 80, now convicted of three counts of felony sexual assault, faces a statutory maximum of 30 years in prison, but a more likely max is 10 years behind bars. Cosby's sentencing date has not yet been set.

Cosby accuser Lili Bernard had to be escorted out of court after it is announced that Cosby is guilty on all counts, since she was so overcome with emotion. Cosby has stayed nearly expressionless.

When main accuser Andrea Constand took the witness stand during the trial, she told the jury that one night in January 2004, Cosby gave her three blue pills he called "friends" to relax her. Instead, they rendered her defenseless, lapsing in and out of consciousness. Constand told jurors she was "jolted awake" by the feeling of his fingers in her vagina as she lay on a couch in Cosby's home.

Lawyer Gloria Allred standing with Cosby accusers after guilty verdict read. She says she’s “the happiest I have been.” pic.twitter.com/C4QQBWNc8z

A couple of months later, she told the court, she attempted to confront Cosby about it.

"I wanted to know what pills he gave to me, and why he did that to me," Constand said. "He stumbled on his words. He said, 'I don't know what you're talking about.' He said, 'I thought you had an orgasm,' and I had not. He would not answer my questions."

Following the verdict's announcement on Thursday, one Cosby accuser, Lili Bernard, was so overcome with emotion that she had to be escorted out of court.

Later, Bernard joined attorney Gloria Allred and other Cosby accusers outside the courthouse, saying the verdict meant that "women are worthy of being believed."

In an interview with NPR's Ari Shapiro, Lise-Lotte Lublin — one of five other Cosby accusers who testified during the trial — said that when her husband called with news of the verdict, her body started to shake when she hung up the phone.

"My heart was pounding inside of me and my mind was going wild, because at the same time that I am hearing what he's saying, it doesn't feel real, it doesn't resonate as being ... true," Lublin said.

Prosecutors pushed the judge to take Cosby immediately into custody, saying Cosby has a private plane and can fly anyplace in the world. Cosby shocks the court by screaming: “He doesn’t have a private plane, you asshole!”

Lublin was 23 when she met Cosby in 1989. He invited her to practice improvisation in a hotel suite and she believes that while there, Cosby drugged and assaulted her. She said the attacks on her character when she came forward with her allegations underscored why victims don't report these crimes.

"The Cosby women had to suffer through all of the hatred and bigotry and racism that was let out because we came forward," said Lublin, who is now a sixth-grade teacher in Las Vegas. "They talked about us like we were animals. ... There's so many that are still out there. And the #MeToo movement is getting there. It's helping. I want to see every single statute of limitations eliminated, abolished, for sexual assault. A person needs that time. We need that time."

Montgomery County DA Kevin Steele: “Money and power and who you are will not stop us from a criminal investigation or prosecuting a case ... We now know today ... who the real Bill Cosby was.” pic.twitter.com/ZrSnzhO5MZ

Prosecutors asked the judge to take Cosby into custody on Thursday, saying he had a private plane and could fly anywhere in the world, but the request was denied.

Cosby's attorneys said they were disappointed by the verdict and planned to appeal.

"We don't think Mr. Cosby's guilty of anything," Tom Mesereau said. "And the fight is not over."

Fighting back tears, Montgomery County District Attorney Kevin Steele said during a post-trial press conference that Constand taking the witness stand and confronting Cosby for the second time was a feat of strength.

"Her quiet courage and her actions through this have helped victims stand up and tell what happened to them," Steele said. "And I think now there's tremendous awareness of how these crimes have been covered up and papered over for years."

Cosby initially faced sexual assault charges in court last June, but jurors could not reach a unanimous decision after 52 hours of deliberation. The judge declared it a mistrial.

This time around, the seven men and five women on the panel sat in the jury box of the Montgomery County Courthouse and listened to more than two weeks of testimony from 25 witnesses. Some cried on the stand recounting how Cosby attacked them while they were in drug-induced stupors, and others attempted to discredit Constand by detailing instances of supposed deceit and inconsistencies.

Constand, the only Cosby accuser whose case has triggered criminal charges, took the stand for the prosecution over two days, as she did during the first trial.

In addition to Constand, five women who have never before confronted Cosby in a criminal courtroom took the witness stand. They told the jury that the entertainer drugged and molested them in the 1980s, stories that first came to light after prosecutors reopened Cosby's criminal case in 2015. That led more than 60 women to lodge sexual misconduct allegations against the television icon once known as "America's Dad."

"You remember, don't you, Mr. Cosby?" said accuser Chelan Lasha from the stand, locking eyes with Cosby, who remained largely impassive throughout the trial.

"I want to see a serial rapist convicted," another accuser, Heidi Thomas, told the court, as spectators gasped at the statement.

Through it all, jurors had a front-row seat to the lawyerly slugfest that pitted three prosecutors from suburban Philadelphia against a throng of defense attorneys led by Los Angeles-based Mesereau, who aggressively depicted Constand as a "con artist."

"You're going to be saying to yourself in this trial, 'What does she want from Bill Cosby?' " Mesereau said to jurors during opening statements. "You already know the answer: money, money and lots more money."

To bolster this argument, the defense called star witness Margo Jackson, who used to work with Constand at Temple University. Jackson was banned from testifying during the first trial, but the judge allowed her testimony this time. Jackson told jurors that Constand once confided in her that she had a plan to frame a wealthy celebrity with a made-up sexual assault claim "to get that money."

Prosecutor Kristen Feden seized on the characterization of Constand as a scheming con artist during closing arguments, saying it was Cosby who deployed his wholesome TV image to gain the trust of women he planned to incapacitate and assault.

She strode across the courtroom pointing inches away from Cosby as he sat wide-eyed at the defense table.

"The perpetrator of that con is this man!" she yelled. "Sitting right here. This is the man."

Constand told the court that enduring two publicity-heavy criminal trials "tore my family apart," yet when asked by prosecutor Feden why she agreed to take the stand again, Constand replied, "for justice."

Constand faced withering questions from Mesereau on cross-examination, as part of a multipronged defense focused on shaking her credibility and that of the other witnesses. He pushed Constand on why she had stayed in touch with Cosby after the incident and portrayed her as a desperate, cash-strapped pyramid scheme participant. Constand was also pressed about the nearly $3.4 million Cosby paid her in a 2006 civil settlement, which was previously confidential.

Cosby's lawyers also suggested to jurors that the incident could not have happened the way she said it did, even hinting that there is a chance Cosby was not in the Philadelphia area around the time Constand said she was assaulted — though the defense did not issue an outright denial of the episode at the heart of the alleged crime. Cosby has admitted that he and Constand had sexual contact in his house around 2004, but he has long has maintained it was consensual.

Legal observers have called the Cosby retrial a major test of the effects of the #MeToo movement, the wave of allegations of sexual assault lodged against prominent media figures that erupted between Cosby's first and second trials.

During jury selection, the judge asked hundreds of potential jurors whether their feelings about #MeToo would get in the way of being a fair fact-finder in the Cosby case. Almost none said they were unaware of the cultural movement. Prosecutors never mentioned #MeToo to jurors during trial, but the defense team made an unsubtle attack on it when lawyer Kathleen Bliss told the panel that "when you join a movement based mostly on emotion and anger, you don't change a damn thing," and adding that "mob rule is not due process." She compared the dozens of accusations against Cosby to a "witch hunt" and a "lynching."