Accessibility links
In 'Emergency Contact,' Finding A Safe Space In Texts Mary H.K. Choi's new novel follows Sam and Penny, both awkward and deeply damaged people, who forge a connection first through text messages and then in real life. 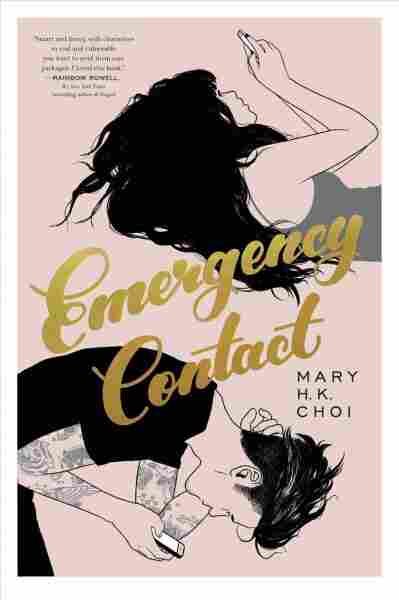 How do we find a real connection in a digital world?

In Mary H.K. Choi's debut novel, Emergency Contact, Penny and Sam strike up a text-based romance, and soon become take-your-phone-to-the-bathroom inseparable. But for different reasons, they have trouble making it real.

"At the start, Penny, who is a Korean-American person, is going off to college," Choi says, "and Sam is in the throes of the worst breakup, he's kind of homeless-adjacent, and he's dealing with a lot of anxiety and panic." The two have what Choi calls a "meet-harrowing" when Penny rescues Sam, who's having a panic attack in the street.

It's that you have someone holding down. And it might not be the person you thought it would be, in terms of like — it might not be your parent, it might not be your caregiver, it might not even be, I guess, the most orthodox definition of who your bestie is. It could be just someone else, who makes the world feel like a safer space. It's like the tether to the space ship when you're kind of free-fall floating out in outer space. And I really liked the idea, too, of that being someone who lives inside your phone. Because you have that person in your, you know, literal back pocket. But it's unencumbered by all this pressure of like, how you look, how they look, is it romantic, am I funny enough, is that person thinking about how my hair is greasy, do I have a zit? It doesn't have all of the stress of that, especially if you're like, cognitively a little bit atypical, and you struggle with different visual cues or timing for who's speaking next. I find texting to be kind of a safe space.

On tackling the issues teens face

The thing that I find interesting about teens now is that no matter how desperate we seem to be taxonomically othering them, for one reason or another — because the Internet, because whatever — I feel like a lot of the benchmarks and the experiences are, you know, same for teens through time immemorial. And I wanted an old-school teen story that still had technology and felt very very contemporary, but with a lot of the sort of bigger themes that are very real. Because teens now, it's this dual thing where they're super-precocious because they're so good at the Internet, and they're like YouTube billionaires, or they're hopeless and they're depressed and anxiety-ridden and overmedicated. And I wanted to give them credit, and I wanted to let them know that they're seen in some way.

On including sexual assault in Penny's past

I wanted an old-school teen story that still had technology and felt very very contemporary, but with a lot of the sort of bigger themes that are very real.

People have described Emergency Contact as funny, and while it is really, really funny in moments, I always kind of want to throw an asterisk on that, because to your point, there should be a trigger warning to this book about the sexual assault in it, and Penny has an experience where — she's like me, she's an indoor cat. She's very into climate conditioning, she loves the Internet, and she has a lot of social issues outside, and so she befriends someone who is a trusted person. And basically he betrays that trust and sexually assaults her, and for a long long time, her brain can't compute that. And I feel like, if someone is exposed to the #MeToo movement, or [Harvey] Weinstein or Bill Cosby through the Internet, and if someone is in a position of seeing what they think sexual trauma looks like, or what the right type of victim is, it can be really confusing about how to define their own experiences.

And I had a personal experience where, for a long, long time, I was gaslighting myself into thinking that one experience was not as big a deal as I thought it was ... and it was really, really painful, because there was just a discord. And I was thinking about how there's so much conversation about mutually affirmative consent, and we all know the language and we all know the the conversations, but in each moment, when it's just two people and you're wildly inexperienced, you don't know what that's supposed to feel like a lot of the time. And I wanted to introduce some of that ambiguity back in a blameless way, where I wanted it to be for Penny to admit that she was sexually assaulted, and I wanted her to be OK with the fact that she did not want to tell anyone, because I do think that there are situations in which you feel pressured to do one thing or another ... I'm not saying that you shouldn't say anything. But what I'm saying is that you don't have to be any type of person in that moment, because you are absolutely blameless.

This story was produced for radio by Samantha Balaban and Ed McNulty, and adapted for the Web by Petra Mayer.