Accessibility links
How A Half-Hour In A U.S. Embassy Changed A Life NPR's Lulu Garcia-Navarro talks to an immigrant, Christopher Francis from Sri Lanka, who was looking for the man who gave him a visa to enter the U.S. 45 years ago. 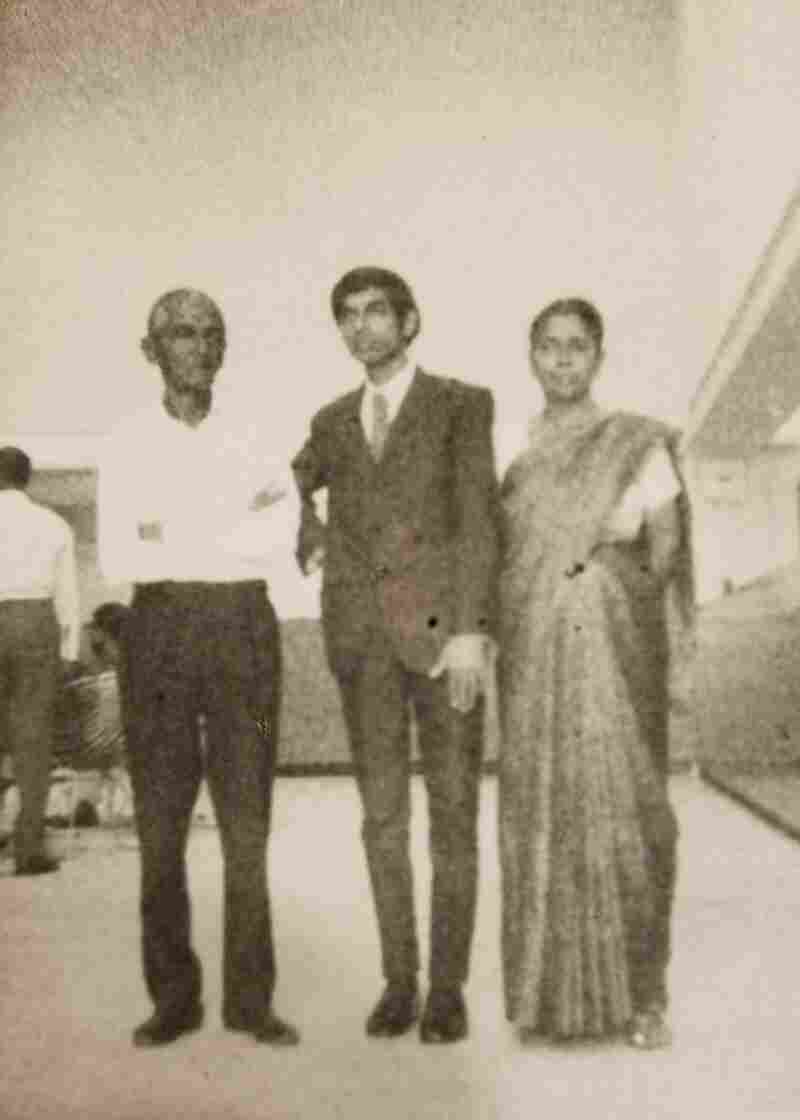 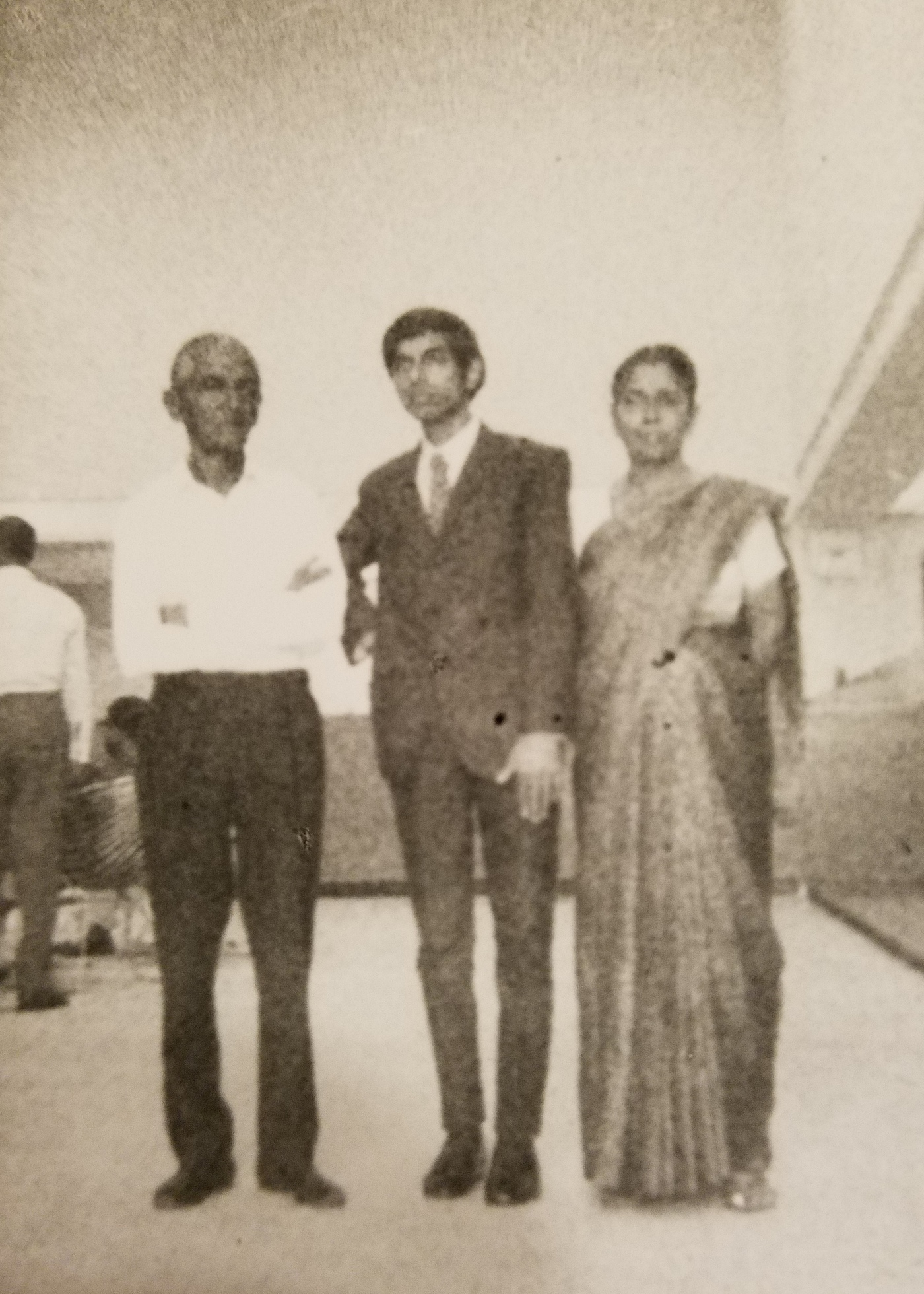 Christopher Francis with his parents before departing the airport in Colombo, Sri Lanka.

Christopher Francis prayed in earnest before arriving at the U.S. Embassy in Colombo, Sri Lanka, in 1973.

It was 2 o'clock in the afternoon and the course of his life depended on this moment. He needed to make a case to a man named David C. Harr about why he deserved a visa to the United States.

That's because Francis grew up Tamil, a persecuted ethnic minority in Sri Lanka. In the 1970s, tensions between Tamils and the majority Sinhalese government grew deadly.

"It's a very tough times we went through. Almost everyone got burnt and killed, they escaped and ran," Francis said.

He survived those dark days, but knew he had to leave his homeland. His dream was to make it to the United States which, as a child, he'd read about in the local library.

"I looked at the pictures or read about it and everything was just fascination about America," he said. "I knew that, I can't remember where, in America, sky's the limit and you are welcomed and you are given every opportunity to succeed in this country."

Through a chance meeting, Francis ended up with a job prospect in Virginia.

But there was one major hurdle: He heard it would be impossible to get a visa to the U.S. Already, the odds were stacked against him. Those who were able to get a visa were professionally qualified and politically connected with the Sri Lankan government. Others were wealthy enough to buy influence. 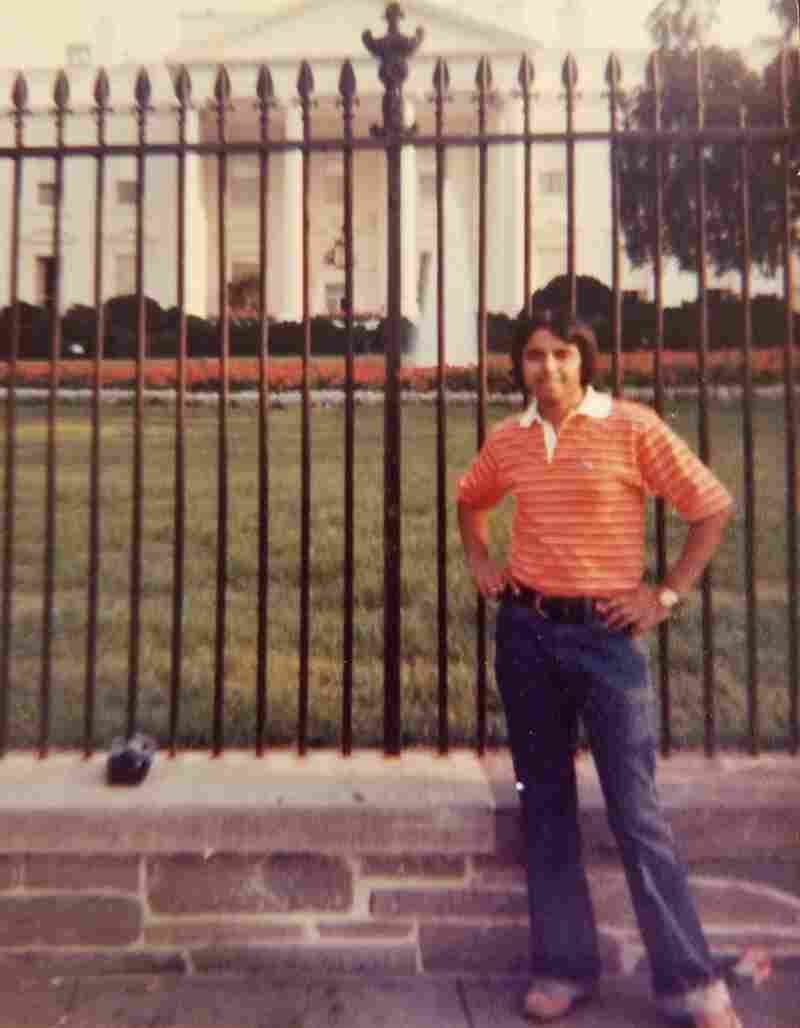 Francis in front of the White House, shortly after immigrating to the U.S. in the 1970s. Courtesy of Christopher Francis hide caption 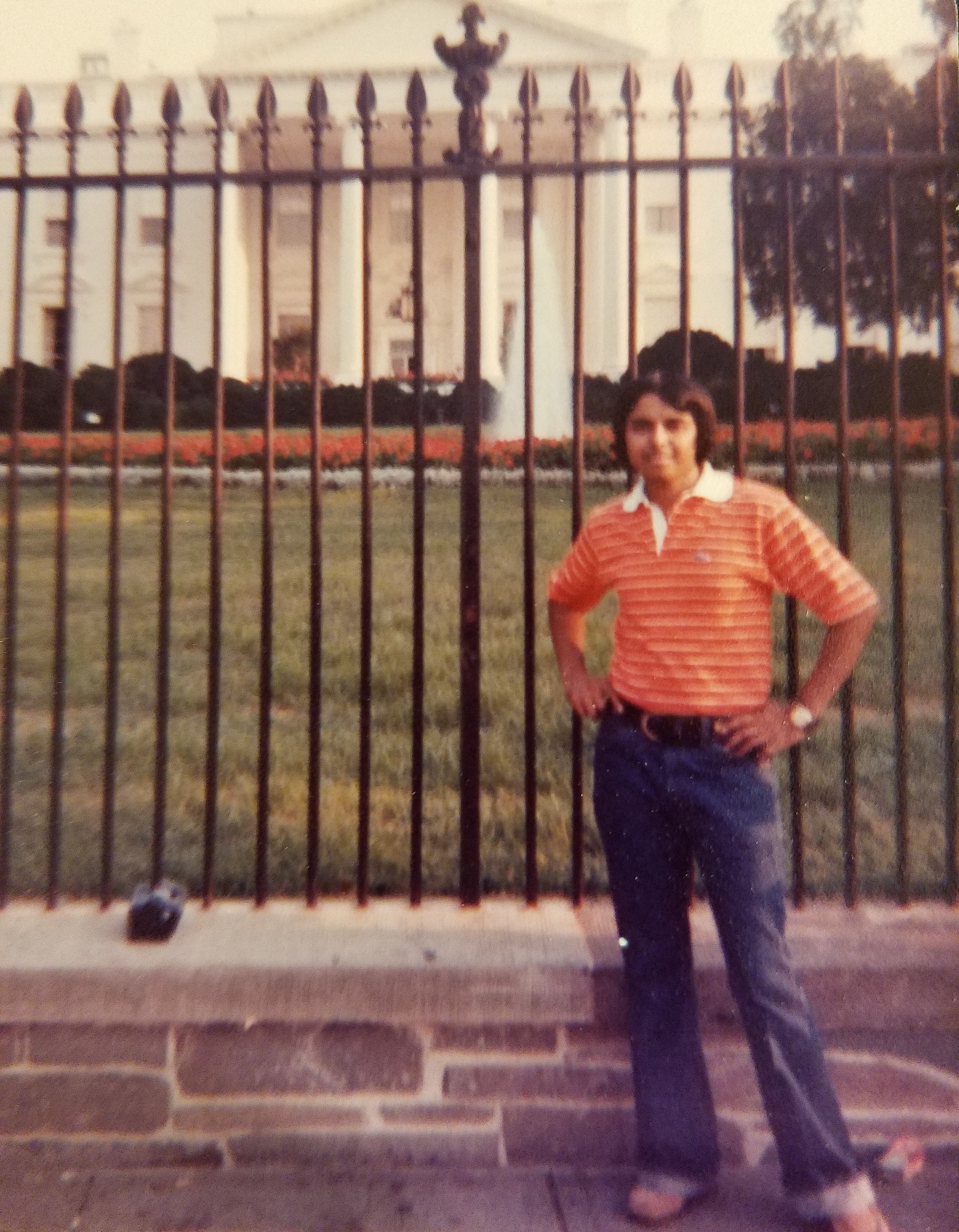 Francis in front of the White House, shortly after immigrating to the U.S. in the 1970s.

The government was openly hostile to Tamils like Francis, who only had a high school education and came from a poor family.

At the embassy, Francis was the only person seeking a visa that day. He remembers David C. Harr in glasses, a tie and short sleeved shirt. Harr asked a couple of questions.

"I was getting a feeling that I was not going to be approved for a visa. Then he asked me about my family," Francis said. "So I felt he became very sympathetic towards me, and I felt because I was a Tamil, I felt he was able to understand."

About a half-hour later, with his visa stamped and signed, Francis and Harr shook hands. Harr wished him the best. It was July 20, 1973.

A month later Francis traveled to the U.S. to train as a nurse. As years passed, he climbed the ladder to become director of inpatient and outpatient services of his hospital department. Today, he's a U.S. citizen with a wife and two daughters. 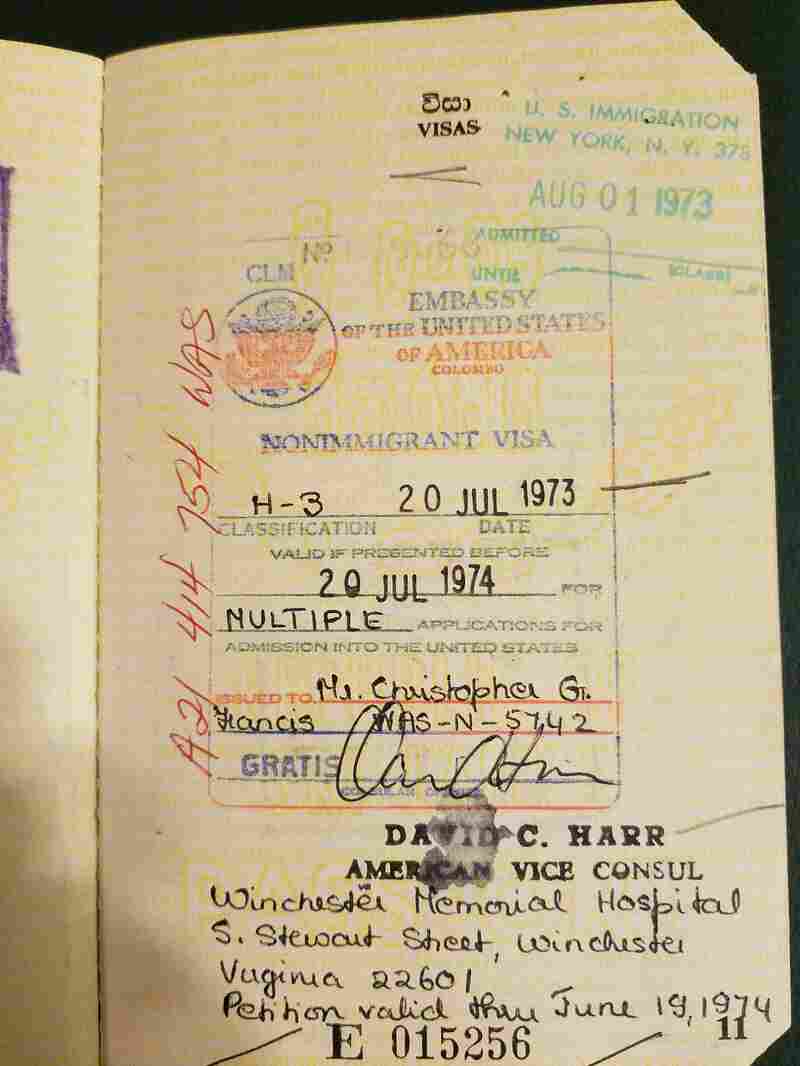 Francis wrote in to NPR's Missed Connections series, and how he wanted to reunite with Harr to thank him for how his life turned out. His reason? "I reflect on my life here and all the blessings and what I have been given — the American dream — and also the fact that I see folks trying to come to this country and it's difficult for them," Francis said.

Through a public records search and a call to the U.S. State Department, we were able to reunite the pair via a phone call. It was the first time they'd spoken in 45 years.

"I'm speechless," Francis said when he first heard Harr on the line. "Here I am trying to reach you ... for so many years, and I tell all my family members that I still have my passport right here with [your signature]."

"It's one of our joys is to see people to whom we issue visas come and really make good," Harr said. "Immigration is a really life-changing experience, and sometimes it works and sometimes it doesn't. This case it was very gratifying to hear the story."

Harr doesn't remember that day very well. Hearing Francis' recollection, he said, "what must have appeared before me in both documentation and in-person is somebody who had a lot of talent, a lot of promise, and was going to make something [of himself]." 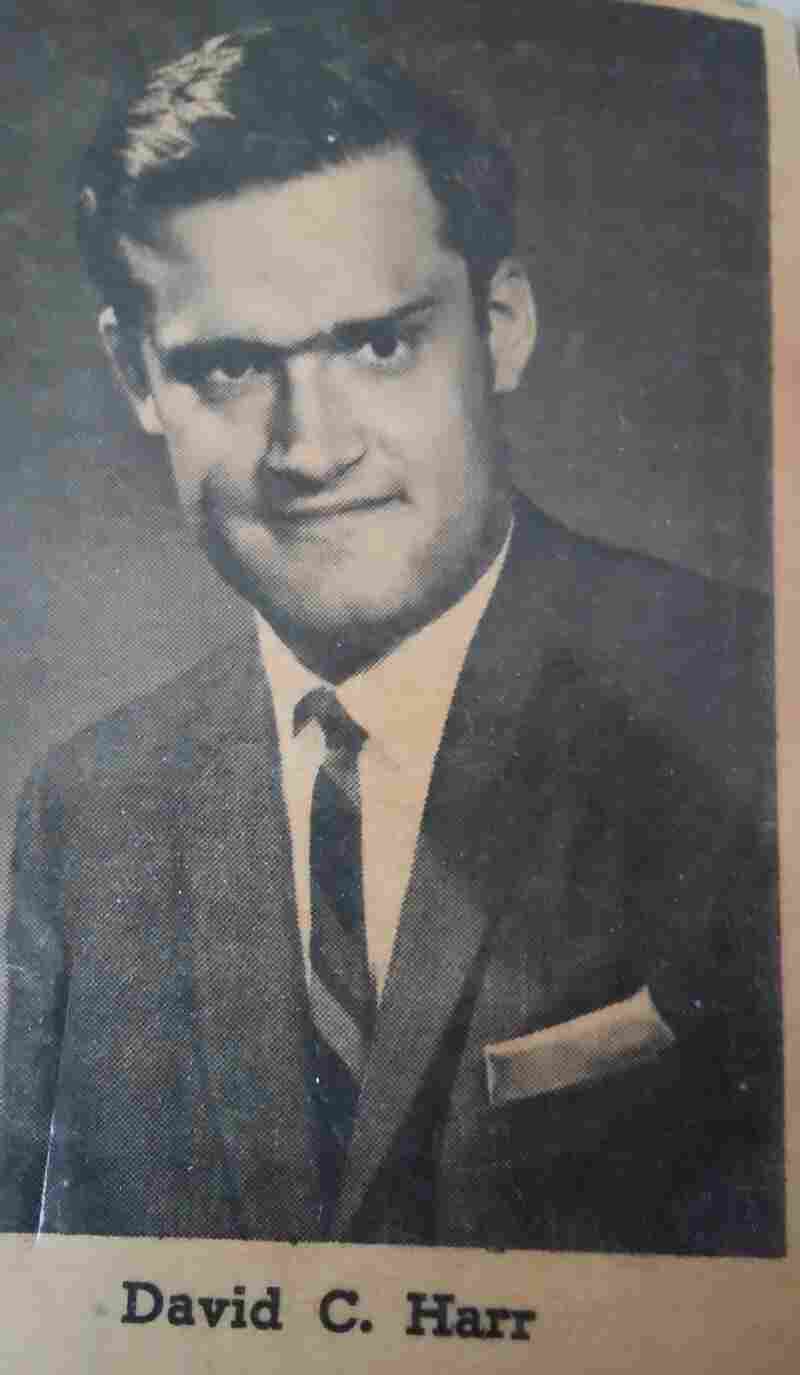 Harr joined the career foreign service in 1967 after serving in the Air Force after developing an interest in international affairs early in life. His father taught missions at a protestant seminary, and international visitors stopped by their family home.

His assignments included posts throughout Southeast Asia and Turkey. He would be in Sri Lanka, where he met Francis, for just one year before moving on. Today, he's is retired and lives in Illinois with his wife. Like Francis, he has two daughters.

"It's like a dream to me, after all these years," Francis told Harr on their call. "I pinch myself. I am a very blessed person, and thank you Mr. Harr."

"Thank you for remembering me," Harr responded.

The two men are now making plans to see each other and their families in person.