Accessibility links
In Gerrymandered Districts, Constituents Likely To Lose Economic Security The researchers believe this is because politicians in gerrymandered districts are less likely to advocate for goods on behalf of their constituents.

The researchers believe this is because politicians in gerrymandered districts are less likely to advocate for goods on behalf of their constituents. 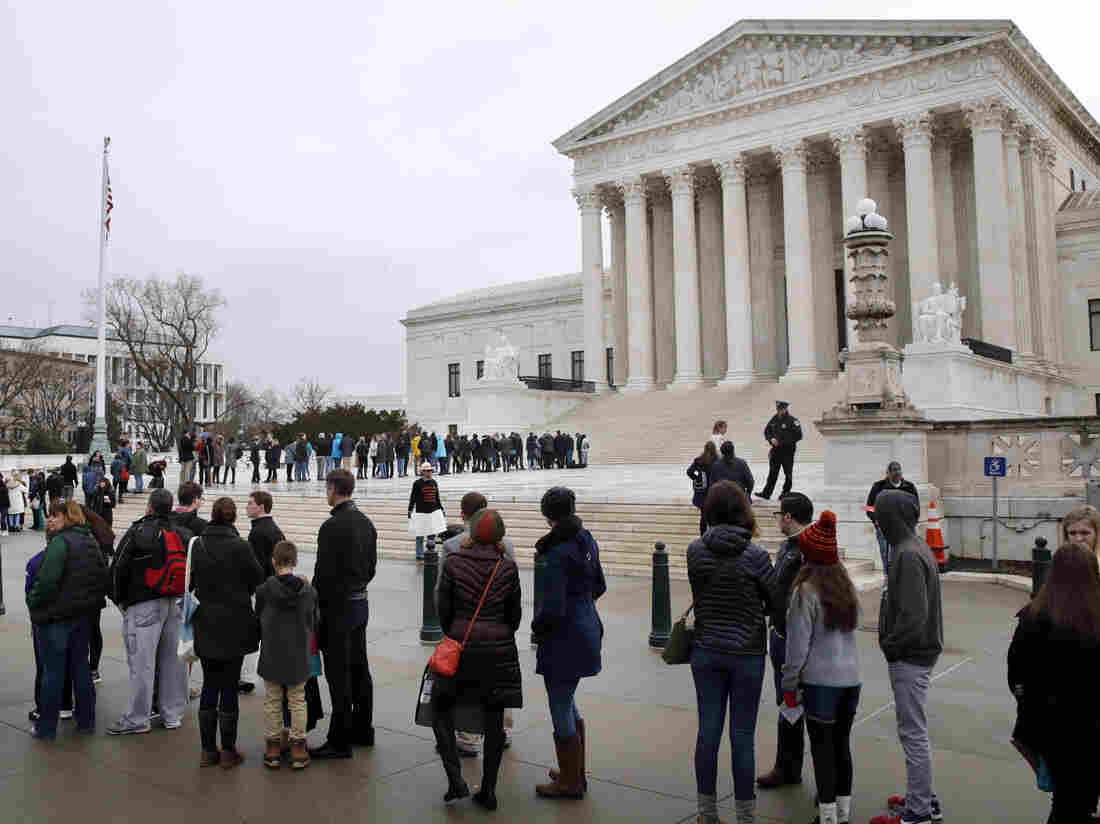 People stand in line to enter the Supreme Court, Wednesday, March 28, 2018, in Washington, where the court will hear arguments on a gerrymandering case. The Supreme Court is taking up its second big partisan redistricting case of the term amid signs the justices could place limits on drawing maps for political gain. (AP Photo/Jacquelyn Martin) Jacquelyn Martin/AP hide caption 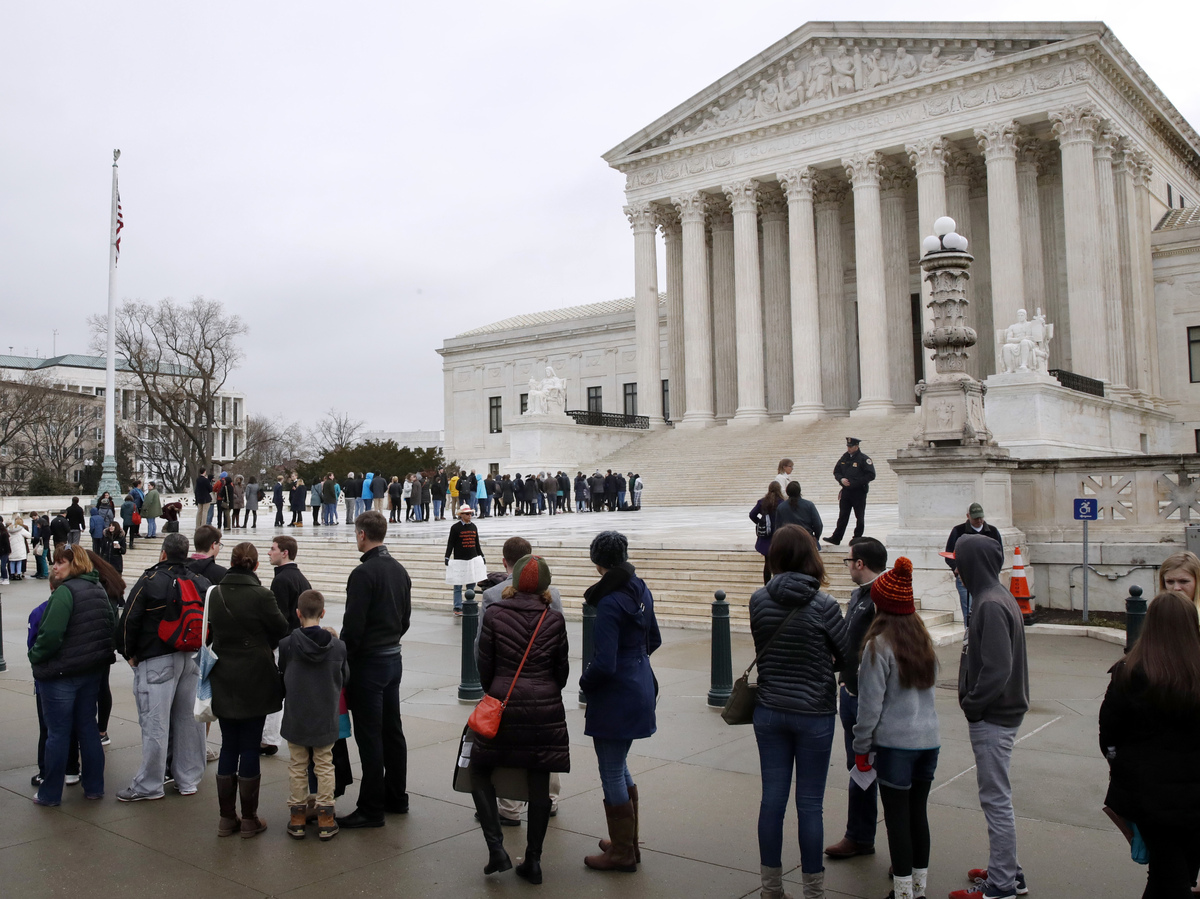 People stand in line to enter the Supreme Court, Wednesday, March 28, 2018, in Washington, where the court will hear arguments on a gerrymandering case. The Supreme Court is taking up its second big partisan redistricting case of the term amid signs the justices could place limits on drawing maps for political gain. (AP Photo/Jacquelyn Martin)

The Supreme Court is weighing cases involving gerrymandering in Texas, Wisconsin and Maryland. Gerrymandering, of course, is when politicians redraw electoral districts to favor one party. And new research suggests gerrymandering can have an economic impact as well as a political one. NPR's social science correspondent Shankar Vedantam spoke about this with Rachel Martin.

Gerrymandering, we think, it affects the outcome of individual races. You say much more than that.

SHANKAR VEDANTAM, BYLINE: It is much more than that. I was talking with Rawley Heimer at Boston College. Along with some colleagues, he asked a simple question. What happens when you insulate politicians from the risk of defeat at the polls? Because that's what happens when you gerrymander a district. What he found, unsurprisingly, is that politicians become less responsive to the needs of the people they represent.

RAWLEY HEIMER: They're going to be safer. They have to worry less about their re-election chances.

MARTIN: OK. So politicians are less worried about getting re-elected. They don't care as much, presumably, about what their voters think. How did Heimer and his colleagues go about measuring this?

VEDANTAM: Well, with each census, Rachel, every 10 years politicians in states that allow for gerrymandering get to redraw district boundaries. So the number and location of gerrymandered districts changes over time. Heimer and his colleagues asked, what happens as these election-district boundaries get redrawn? They found it had a big impact on access to credit. When you try to buy a house or a car, or start a new business, you often need to apply for credit. Now, this is a big deal. If you can't buy a car, you might not be able to drive to a new job. You might not be able to start a new business.

VEDANTAM: It turns out that as states become more heavily gerrymandered - and this is true of both Democratic gerrymandering as well as Republican gerrymandering - it becomes harder and harder for consumers to get access to credit.

HEIMER: As these districts become potentially more gerrymandered, we're seeing individuals have more difficulties accessing credit. In a heavily gerrymandered district, you would need to have $3,400 more in personal income to have a lender approve your loan.

MARTIN: OK. So wait. Make the connection for me. How does a district being really gerrymandered have anything to do with whether or not someone can get credit to buy a car?

VEDANTAM: So political scientists, Rachel, have talked for a long time about the election consequences of gerrymandering. They obviously make the seat more safe. You're more likely to win your election because you decided who can essentially vote for you.

VEDANTAM: But the long-term effect of this is that you're essentially insulating politicians from the needs and concerns of voters. And what this research paper is doing is it's looking at one instance of how that might affect a very important part of our lives. Lenders are attuned to political pressure, to regulations, to oversight, to legislation. As politicians become less accountable to voters, there's less pressure on lenders to do the right thing by consumers. Now, it's worth pointing out that this is just one domain. If you insulate politicians from the risk of defeat at the polls, this can likely have many other effects, as well.

MARTIN: Right. So if we're talking about credit and how it's harder to get credit because your district's been gerrymandered, you could imagine there are all kinds of other issues that pop up in your day-to-day life because you live in a district that's not politically competitive.

VEDANTAM: Precisely. And in many ways, I think gerrymandering speaks to the idea of being just an undemocratic process, that you're reducing the vulnerability of politicians to being accountable to their voters. And when you do that, undemocratic systems lead to politicians ignoring the needs of their constituents.

MARTIN: Shankar Vedantam. He is NPR's social science correspondent. His show is called Hidden Brain. It explores the unseen patterns in human behavior. You can hear it on many of our member stations or wherever you get your podcasts.

Hey, Shankar. Thanks so much.