Accessibility links
'A Lucky Man' Challenges Masculinity — With Love Jamel Brinkley's brilliant new story collection is intent on recognizing what masculinity looks like — but also questioning our expectations of it, and criticizing the ways it can be toxic. 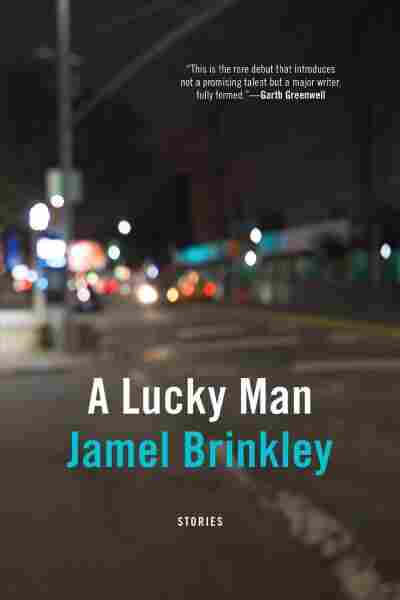 In the wake of the #MeToo movement, it seems like everyone's talking about toxic masculinity. But masculinity, toxic or not, has been on Jamel Brinkley's mind for far longer; his debut short story collection, A Lucky Man, brilliantly examines the topic from a range of angles. To be clear, Brinkley isn't excusing the troubles of masculinity in these stories. Instead, the collection is intent on recognizing what masculinity looks like, questioning our expectations of it, and criticizing its toxicity — and somehow managing to do all of that with love.

Several of the stories examine what it means for a man to believe he deserves — whether that's a woman, a kind of life, or a certain kind of freedom in the world. In the title story, we follow Lincoln, recently separated from his wife of a couple decades and working as a security guard at an Upper East Side school in New York. On his subway ride to school, he takes a photograph of a young woman's face: "Something like a scowl, the expression seemed different on women of a certain beauty, like they never had to justify their use of it — they just assumed they had the right." This description is doing two things: First, it is perhaps the most loving description of what's often called "resting bitchface," and second, it is a wonderful example of how cleverly Brinkley uses parallels in his stories. Just as Lincoln is impressed with this woman's right to close her face to him, he also believes he has the right to capture that face in a photograph and take it home with him — there's nothing wrong with taking a picture of a face, right? Nothing lewd in that, Lincoln thinks; at least he isn't taking pictures of the undersides of women's skirts. It is in this place that Brinkley dwells so brilliantly, examining the way men excuse their own attempts at ownership of the world around them.

There's a fine line between outright, blatant, or malicious sexism and this more comfortable, seemingly less offensive place where men are merely ignorant of the ways they take possession of women — their looks, their labor, their humanity. And this is the line Brinkley knows how to straddle, creating fully formed characters who wrestle with what they think they have a right to. As a result, many of the stories also show women's power to stymie men. In the startling opening story, "No More Than a Bubble," two men, close friends, pursue two women at a party. As the night progresses, they lose and regain the women's interest over and over, and eventually manage to get the honor of walking them home. A rabid dog comes across their path, and — maybe because they're all a little drunk — the two men have no idea what to do. Meanwhile, one of the women, Sybil, kicks the dog squarely in the snout and the other, Naomie, joins her. "Then the animal wasn't moving or breathing. All of its wildness had been extinguished." In this moment, as the women exhibit strength that is feral and violent, they also extinguish the wildness belonging to the men.

... the collection may include only nine stories, but in each of them, Brinkley gives us an entire world.

Another theme appearing in almost all the stories is that of touch between men. In a world where "no homo" is still common parlance, there is always a charge present when heterosexual men touch in full view of someone — in this case, the reader. The touch Brinkley explores is varied, gentle or fierce, and it's almost always uncomfortable, yet beautiful, because it's an expression of a deep need that so many human beings share. In the story just mentioned, the two friends are forced to gaze at one another naked. Elsewhere, two usually-close boys get into a physical altercation, one man claps another on the shoulder, and two brothers share the complex dance of capoeira — the Brazilian martial art — while trying to discuss a wholly different and terrible kind of touch they both remember. Brinkley is masterful at conveying the importance of this tangible element between his male characters, while also allowing it to seem entirely natural and necessary.

And while it's clearly a topic that concerns him, Brinkley's book isn't only about masculinity. It also deals in family relationships, love, aging, loss, and disappointment — the universal themes that keep us coming back to literature — while also conveying versions of black male experience. In fact, the collection may include only nine stories, but in each of them, Brinkley gives us an entire world.