Accessibility links
'Cobra Kai': A Crane Kick Of Nostalgia Right To The Throat Johnny and Daniel are still at it in Cobra Kai, a surprisingly interesting look at what happens later to people who peak — or crash — in high school. 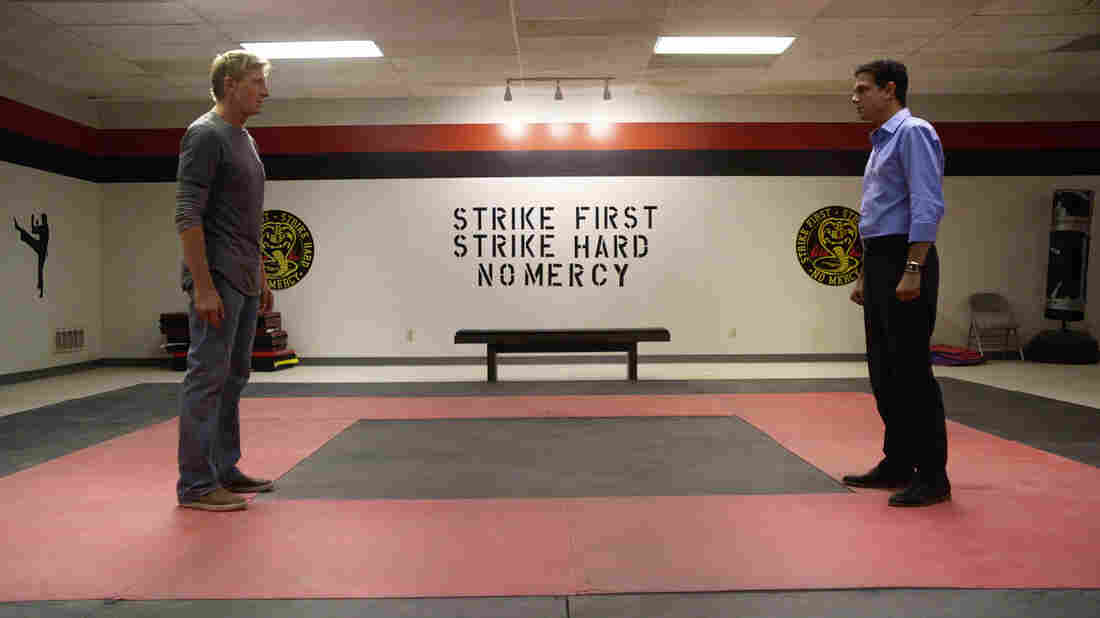 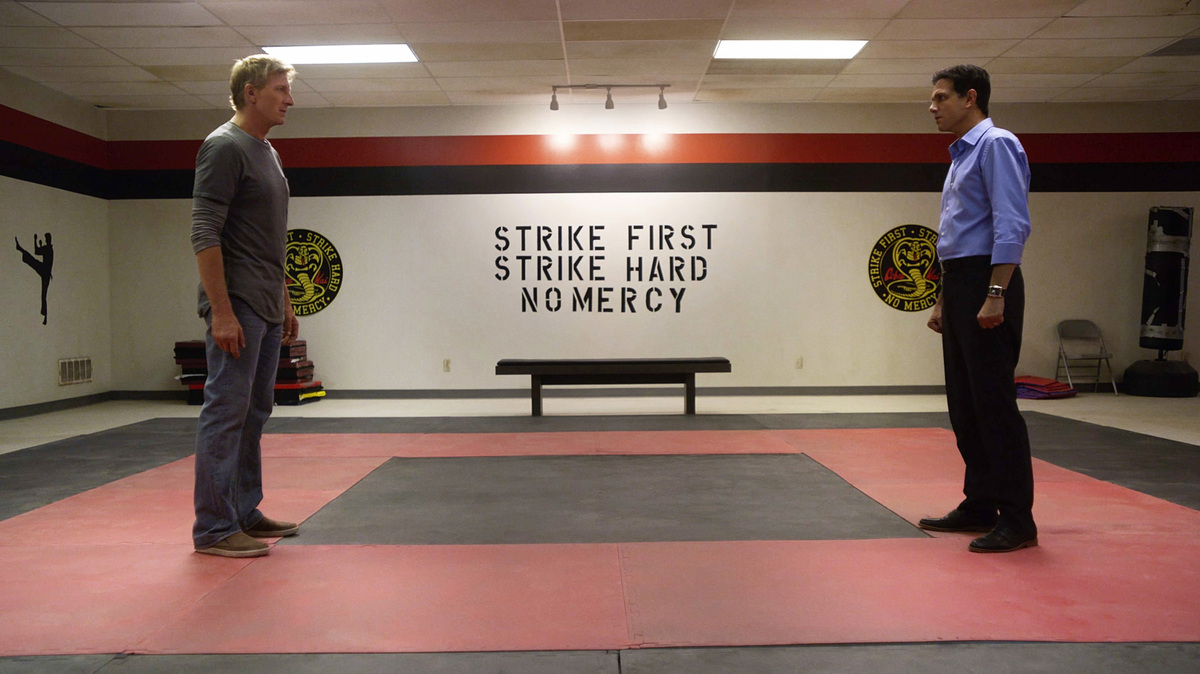 William Zabka and Ralph Macchio star in Cobra Kai, which revisits Johnny Lawrence and Daniel LaRusso more than 30 years after The Karate Kid.

Lo these many years, by which I mean since 1984, many have wondered about the answer to a simple question of history. It has echoed off the walls of canyons, burbled in the bubbles of mountain streams, and been shouted into the bottoms of volcanoes, only to be absorbed by hot lava and spit back out as igneous rock. The question: What if Johnny Lawrence hadn't said, "You're all right, LaRusso"?

Be cautioned that a couple of decades-old spoilers (yes, my fellow olds, it has been almost 34 years) follow: At the end of The Karate Kid, after Daniel LaRusso (Ralph Macchio) defeats Johnny Lawrence (William Zabka) at the All-Valley Tournament, Johnny comes over to Daniel, a guy he's been bullying mercilessly for months, to personally hand him the trophy. "You're all right, LaRusso," he almost cries, so complete is his transformation into a bully who now understands the error of his ways and the evils of his sensei, John Kreese (Martin Kove). There has not been a reconciliation so meaningful since the last time Alec Baldwin and his Donald Trump impression got back together.

But what if it had never happened? What if Johnny had just nursed that grudge, becoming an angry young guy and then an angry, slightly-less-young guy, and then eventually an angry, middle-aged guy who never got over the humiliations he suffered in high school?

That is the question that begins the YouTube Red 10-part Karate Kid sequel series Cobra Kai, which sounded like such a bad idea when it was first announced that the only way to really be fair to it and also fair about my expectations for it is to say that it is surprisingly — maybe shockingly — not terrible.

The Karate Kid feature film sequels have gone in the usual directions. One rehashed the first in a new setting with new supporting characters. One rehashed the first and added a serious rift between Daniel and Mr. Miyagi (Pat Morita). Then they were out of Daniel stories, so Mr. Miyagi trained a girl — played by Hilary Swank! Remember that? In 2010, they remade the whole thing with Jaden Smith and Jackie Chan.

But this — this is something quite different. This is the dry, clumpy ashes of your '80s movie teenagers, made into losers who peaked in high school. Not just Johnny (Zabka), who's an embittered, racist, misanthropic jerk. Also, to a lesser extent, Daniel (Macchio), who is not nearly as bad a person, but who is grown rather corny, using bonsai trees in the advertising for his car dealership and claiming that he "kicks" the competition. Neither Daniel nor Johnny has really gotten past his adolescent view of himself, and I'll be darned if that doesn't turn out to be a compelling premise.

It is inevitable that Johnny and Daniel, neither of whom is involved in karate when the series begins, will both be involved in karate when the series — or when this season of the series — ends. There will be students playing out echoes of the battles of their youth. But while it would have been pretty easy to just hire Zabka and Macchio to stand around coaching and making little throwaway references to the first movie while transferring the story entirely to the students, that doesn't happen.

The narrative thrust really is about these middle-aged men, about bullies who don't grow out of bullying and hotshots who don't grow out of being hotshots. There are moments where Johnny Lawrence as an aging, resentful washout is the most realistically menacing person on television in some time — much more the kind of guy people have to tangle with every day than some of the more dramatic drug dealers and criminal overlords who make up our prestige villains. You're unlikely to look at, say, Gus Fring on Breaking Bad and say, "That's what's actually wrong with the world." But when you look at Johnny ... well, maybe. Sometimes the most mundane creeps are the most upsetting.

A note of caution: Don't set your expectations too high. The series looks painfully cheaply made, and when it moves away from Johnny's victim complex, there is certainly some much less interesting business going on. Some of the writing is pretty undercooked, as is some of the acting. (Uh, sorry.) But there is a cleverness to things like the music choices that suggests that while the show was made with something of a knowing wink, it was also made affectionately, and not cynically. There's some itch-scratching, rib-elbowing callback business (hey look, it's Golf N Stuff!), but not too much. I guess I'll have to wait for another season to find out what happened to that monstrous kid who yells "GET HIM A BODY BAG! YYYYEAH!" near the end of the climactic fight in the first movie.

In the end, it comes down to this: They offered screeners of all 10 episodes. And I watched all 10. And when it comes back, I will watch more of it — voluntarily. There are much better shows I have enjoyed much less; that's just how it works sometimes. And it's hard to calibrate what this would mean to someone with no particular attachment to The Karate Kid; I was right in the sweet spot of its appeal and have a nostalgic fondness for it that many do not. But if we must reboot our beloved old favorites, it's much better to see it done like this, using the passage of time as an asset and a way into a different story about the same people, than as a cheap rehash with the old cast perched on it like check-cashing cake toppers.