Accessibility links
'Your Black Friend' Is Back, With Plenty To Say Ben Passmore expands on his popular self-published 2016 comic — also called Your Black Friend — in this new volume, jam packed with dense, brilliantly colored drawings and thoughtful reflections. 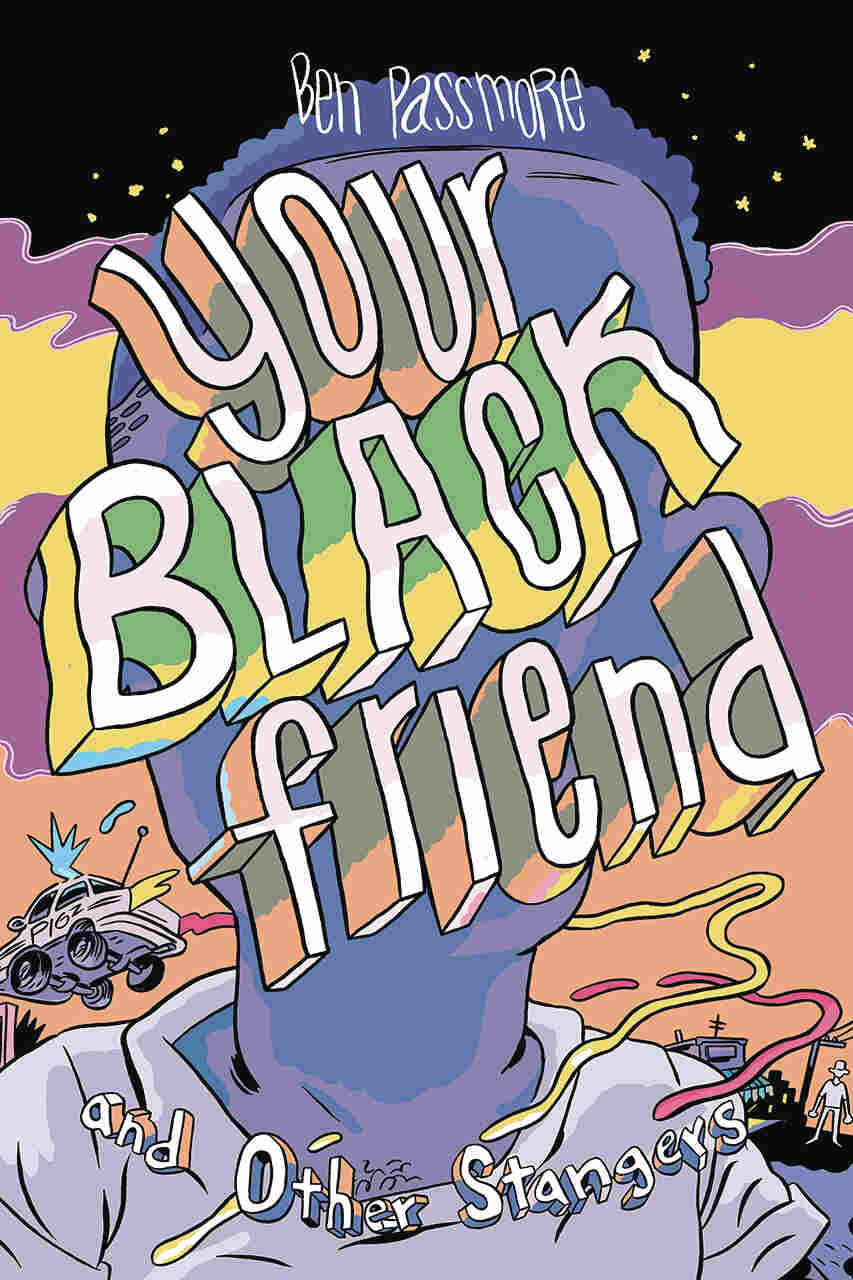 Your Black Friend and Other Strangers

Title
Your Black Friend and Other Strangers
Author
Ben Passmore

It's ironic that the world of "art" comics should be dominated by graphic novels. In a novel, graphic or no, you've got to tell a story. But many artists who create graphic novels are storytellers second, and it shows. It's not their fault; they're just not as interested in the demands of plot and character as they are in the possibilities of panel and line.

Ben Passmore's Your Black Friend and Other Strangers is a collection, not a graphic novel, but it tells a story and tells it loud. This story, Passmore writes in the introduction, is "about how to be dangerous, how to be a failure, how to laugh in the face of a world that wants to crush us. ... And we all fail, homies, it's OK. We just have to learn how to fail upward." He adds that "there are a bunch of comics in here that are supposed to turn you into anarchists," and with that goal he pours out his thoughts on racism, the Black Lives Matter and Antifa movements, hypocrisy, Trump, the police, God and what it's like to go to jail. He writes lavishly, excessively, piling on observations and theories until he nearly overflows his word balloons.

Passmore's art, too, seems to have more to say than there's room for. The drawings are brisk and hasty, hustling the viewer along rather than demanding that she linger. Often there's more happening — more motion, more mise-en-scene — than the too-small, too-regular panels can comfortably contain. In the lead story, "Your Black Friend," the looming letters of the title jostle with the edges of the page.

"Your Black Friend" is a phenomenon all on its own. The 2016 comic originally consisted of 12 Xeroxed pages inspired by Black Skin White Masks, Frantz Fanon's 1952 book about how racism affects human psychology and philosophy. In Fanon's work, Passmore writes, he and his friends "recognized a language for the dysphoria we felt in the face of white supremacy in our mostly white punk scene and ... the society at large."

So Passmore created a comic about his own experiences as a black man surrounded by whites. "Your Black Friend" was a sensation. It was nominated for an Eisner Award, won an Ignatz Award and made it onto NPR's list of 100 favorite comics and graphic novels. But reading "Your Black Friend," it was clear that the author had more on his mind than could fit into 12 pages.

Now Passmore has room to unleash his dense, brilliantly colored drawings, thoughtful reflections and kooky vignettes. He describes his own arrest, for wearing a mask at an anti-Ku Klux Klan protest: "It's pretty ironic ... [the law against masks] was passed to prevent Klansmen from wearing masks to intimidate and threaten people." Laws, he argues, are at best unreliable guards against tyranny. "When it comes to trying to live in a just world, debate is often not enough," he writes in a critique of the American Civil Liberties Union. "If we always defer to the law, we can't count on the most ethical result." And so, in "Mrsa and Billy," two people bullied by a cop beat him up and murder him in the name of "reparations." Elsewhere, though, Passmore weighs the contradictions of human nature with delicacy and self-reflection. In "Ally I Need Is Love," his encounter with a racist old woman ends with a hilariously sentimental twist.

The political and personal stories dominating the book have the most impact. Their busy drawings create a powerful sense of burgeoning energy, and a cacophony of colors excites the eye.

The political and personal stories dominating the book have the most impact. Their busy drawings create a powerful sense of burgeoning energy, and a cacophony of colors excites the eye. In a couple of more experimental efforts Passmore's artwork is careful and elegant, but the stories are confusing and lack heart. It's as if, deciding to focus on the art, he loses his grip on the narrative.

In that, he's just like many artists who write graphic novels. Fortunately, his overall sense of urgency is so potent that the book as a whole is like a juggernaut. Real life, it turns out, makes for a great story.