Accessibility links
In Dave Eggers' New Book, Heroic Kids Do The Heavy Lifting The Lifters takes some of today's grown-up economic concerns and folds them into a supernatural story for kids. Kids are "heroes in waiting," Eggers says; they just need a chance to prove it. 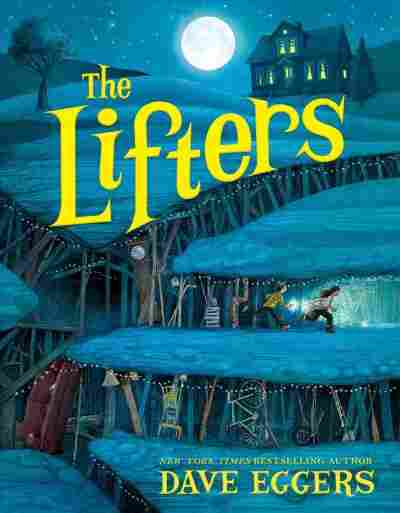 These days, it's not uncommon to open up the paper and read about a dying town that lost its factory. Or about families struggling economically. Or about a political battle tearing a community apart.

In his latest book, Dave Eggers folds those elements into a supernatural story for kids. The Lifters is about a young boy who discovers that a dangerous force is literally feeding on the despair in his community — and even threatening his family.

The story is set in a town that once manufactured carnival carousels, which sounds light and fun, but it's actually a pretty dark place. "It's based, a little bit, on some of the small towns in rural Pennsylvania where carousels were manufactured, about a hundred years ago," Eggers says, "and this town was called Carousel, and then to some extent they've forgotten why they even had that name."

On Gran, the hero of the story, and his friend Catalina

In Dave Eggers' Latest, A Mother Moves Her Kids To The Alaskan 'Frontier'

I don't think he's a loner by choice ... he's new, and instead of being picked on, he's completely ignored. Gran is so sure that maybe he doesn't even exist that he runs into a brick wall just to prove he's three-dimensional. So I wanted Gran to have that kind of sensitivity, but Catalina ultimately bolsters him and gives him a purpose, you know, which I think so many kids want — like a task, a responsibility, sort of — they're heroes in waiting, really, they just want to be given the opportunity to prove it.

On having kids read his story

They're astoundingly good editors. They will tell you exactly what's working, exactly what's not working. I took every last edit from every one of these kids. They are the purest readers. They do want to be entertained, and I'll say that sometimes they are easier to please, for sure, than cynical adult readers, because it's all new to them — so this might have been, like, the seventh chapter book some of these kids read, or the second or the third. So that's why I feel honored to be part of their reading experience at such a young age, because I remember every last book I read in that era. I was not, like, a voracious reader, so I remember the one or two books a year that I read when I was ten and 11 and 12, because I had to be dragged kicking and screaming to a chapter book at that age.

On what he wants kids to take from the book

I want them to feel power in their own abilities. Courage matters, bravery matters, and if you lead, there will be people that will be follow — those are some of the things I'm hoping readers will take away, and then there's a lot of good cheap jokes, too.