Accessibility links
Speaker Ryan Backs Down From House Chaplain Fight The Rev. Patrick Conroy informed Speaker Paul Ryan he was rescinding his earlier resignation, effective immediately. In a statement, Ryan said he accepts and the chaplain will now remain in the job. 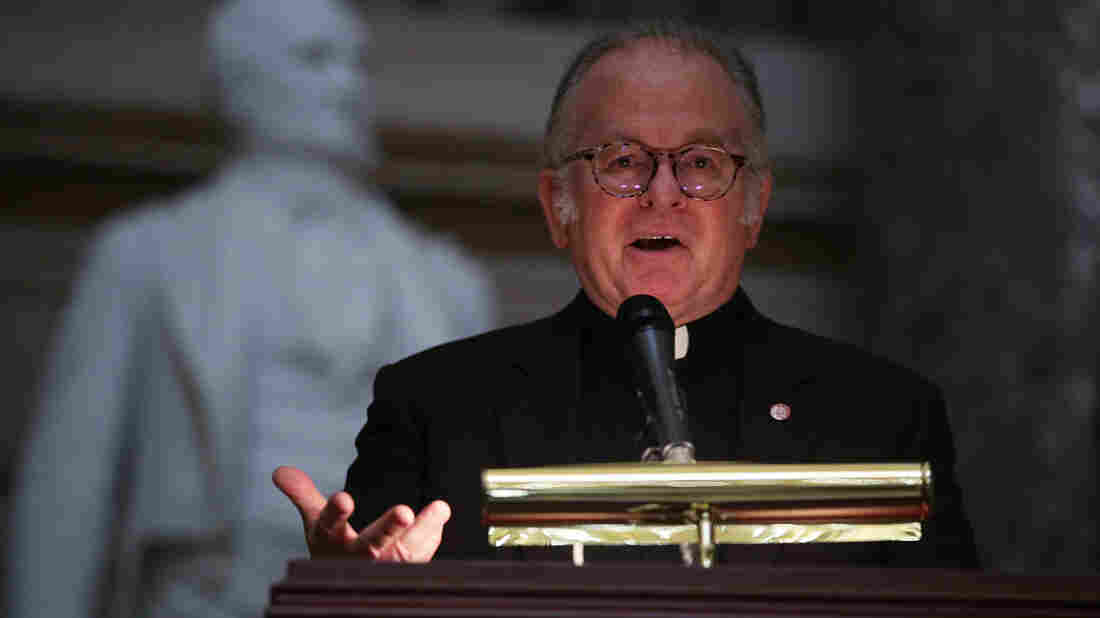 House Chaplain Patrick Conroy speaks during a memorial service at the Capitol on Sept. 27, 2017. Conroy resigned under pressure from House Speaker Paul Ryan in April, but that has been reversed after Conroy wrote to Ryan protesting his ouster and suggesting anti-Catholic bigotry was a factor. Alex Wong/Getty Images hide caption 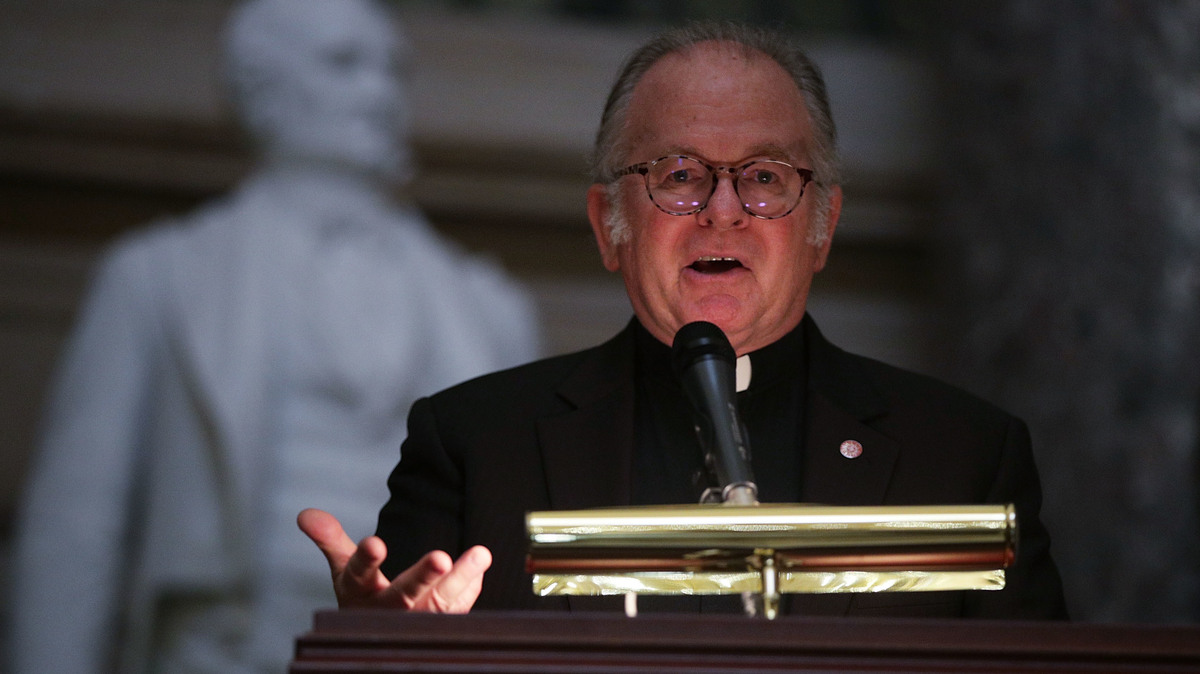 House Chaplain Patrick Conroy speaks during a memorial service at the Capitol on Sept. 27, 2017. Conroy resigned under pressure from House Speaker Paul Ryan in April, but that has been reversed after Conroy wrote to Ryan protesting his ouster and suggesting anti-Catholic bigotry was a factor.

An ongoing Capitol drama over the fate of the House chaplain ended as quickly as it had escalated on Thursday, with the Rev. Patrick Conroy rescinding his resignation and Speaker Paul Ryan accepting his decision.

In a sharply worded letter, Conroy, a Jesuit priest, suggested bias against his Catholic faith in the speaker's request for his resignation last month. Conroy alleged Jonathan Burks, Ryan's chief of staff, had said "maybe it's time we had a chaplain that wasn't a Catholic" during an April 13 private meeting in which Burks informed Conroy that the speaker wanted him to step down.

Ryan, who is Catholic, released a statement in response in which he said he accepted Conroy's letter and "decided that he will remain in his position." He added: "It is my job as speaker to do what is best for this body, and I know that this body is not well served by a protracted fight over such an important post." Ryan said he plans to meet with Conroy next week "so that we can move forward for the good of the whole House."

In a separate statement, Burks pushed backed against the priest's account of their private meeting. "I strongly disagree with Father Conroy's recollection of our conversation. I am disappointed by the misunderstanding, but wish him the best as he continues to serve the House," he said.

Ryan's office has been been on the defense about what led to his decision last month to ask Conroy to step down from the job in which he has served since 2011. The House chaplain is reappointed at the start of every two-year congressional session.

Earlier this week, Ryan discussed his decision to fire Conroy at a conservative summit hosted by The Weekly Standard. He has criticized Conroy's ministry without offering any detailed explanation.

"Father Conroy is a good man, and I'm grateful for his many years of service to the House," Ryan said. "This was not about politics or prayers; it was about pastoral services. And a number of our members felt like the pastoral services were not being adequately served, or offered."

Conroy decided to rescind his resignation — which was set to be effective May 24 — because he questioned whether Ryan has the authority to fire him without cause, and he pushed back at the allegation that his ministry to the Capitol Hill community was lacking. "In fact, no such criticism has ever been leveled against me during my tenure as House Chaplain. At the very least, if it were, I could have attempted to correct such 'faults.' In retracting my resignation I wish to do just that."

House Democrats seized on the firing last week and attempted to force an investigation into Conroy's ousting, but their procedural gambit was defeated on the House floor. Some Catholic Republicans, including Reps. Peter King of New York and Walter B. Jones of North Carolina, have joined with Democrats to raise questions about the speaker's decision to force out Conroy.

One conservative Republican, North Carolina Rep. Mark Walker, a former pastor, fueled speculation of anti-Catholic sentiment from the GOP's Southern evangelicals when he told reporters the next chaplain should be "somebody who has a little age, that has adult children, that kind of can connect with the bulk of the body here, Republicans or Democrats, as far as what we're going through back home — you've got the wife, the family, things you encounter — that has some counseling experience or has managed or worked with people, maybe a larger church size, being able to have that understanding or that experience."

Walker walked backed those comments but then over the weekend withdrew himself from the selection committee to find a new chaplain.

The House chaplain is a constitutional officer of the U.S. House, a group of officials that includes the House clerk, the sergeant-at-arms, and the doorkeeper for the chamber. They all earn $172,500 annually and enjoy many of the privileges awarded to current and former lawmakers, including pensions and access to the chamber floor.