Accessibility links
Jurist, Prudent: Documentary 'RBG' Profiles Ginsburg On And Off The Bench Co-directors Julie Cohen and Betsy West's doc preaches to the choir, and does so most effectively when it focuses on Ruth Bader Ginsburg's career and not the memes that have accrued to her. 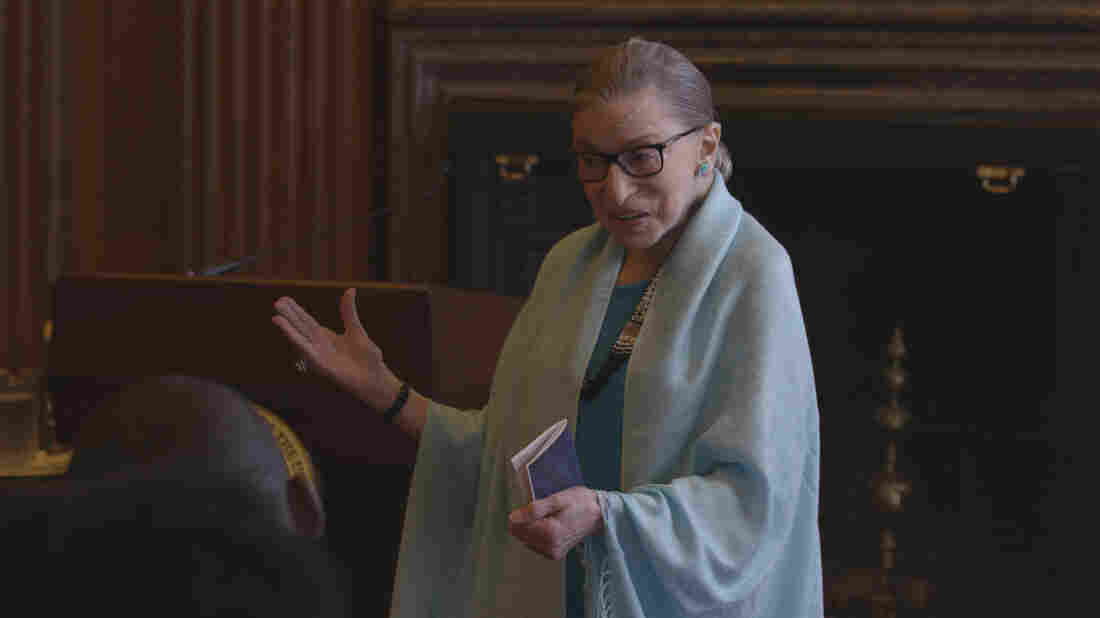 "Yeah You Know Me": Supreme Court Justice Ruth Bader Ginsburg is the subject of RBG, a documentary about her life and work. Magnolia Pictures hide caption 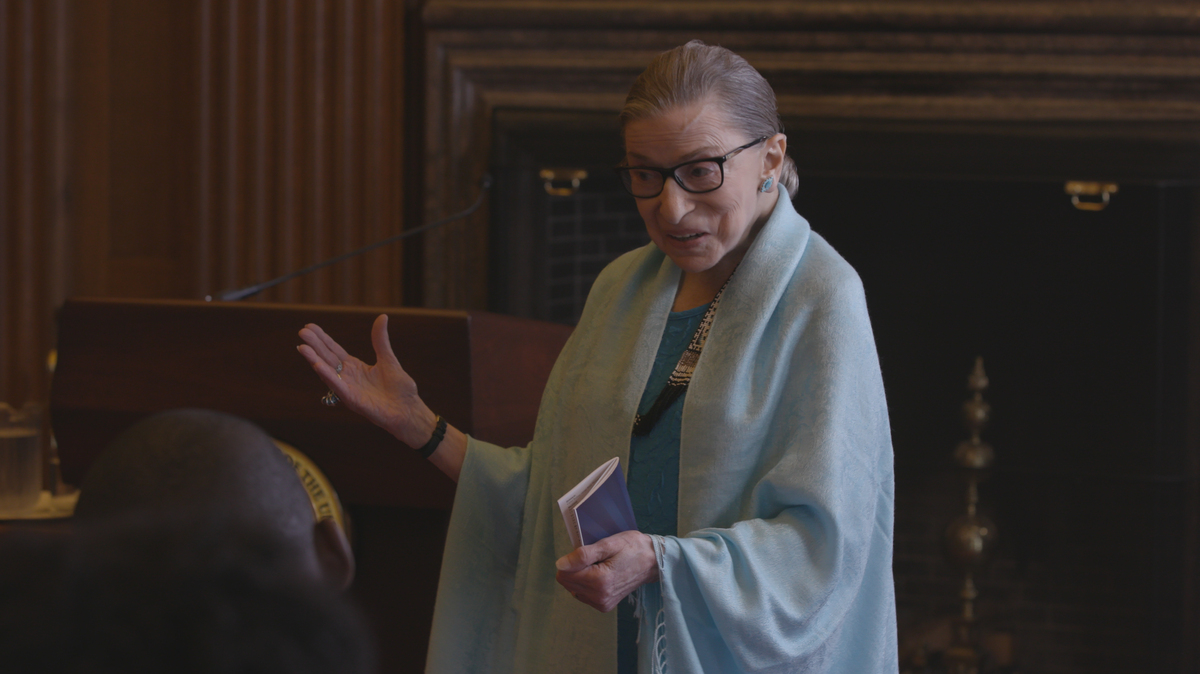 "Yeah You Know Me": Supreme Court Justice Ruth Bader Ginsburg is the subject of RBG, a documentary about her life and work.

"Thank you to all the meme creators," reads a message in the closing credits of the new documentary RBG. That's a pretty good mission statement for the film.

If you are a meme creator yourself, or if you're merely one of the millions who enjoy wandering through the hinterlands of Twitter and Tumblr searching for small bursts of wit to carry you through a dark world, you may have already guessed that RBG is a biography of Supreme Court Justice Ruth Bader Ginsburg. That's because, in the last few years, Ginsburg's initials have become shorthand for an Internet joke called "The Notorious R.B.G.," imagining the 85-year-old legal authority as the beat-spitting, muscle-sculpting, jabot-rocking equivalent to rapper The Notorious B.I.G. Well, as "Kiki" herself notes, at least they were both born in Brooklyn.

There would likely be no RBG without "The Notorious R.B.G." Another way to say that is: The American public would have little interest in the life story of a figure like Ginsburg if the youths hadn't first found a way to ironically salute her blistering dissents from the bench with a cottage industry of T-shirts, action figures and Photoshopped superhero movie posters. Is the meme-ification of the century's most reverent Constitutional scholar a good thing? Well, it probably helped co-directors Julie Cohen and Betsy West secure funding and a CNN distribution deal for their project, as well as line up some primo talking heads, including NPR's own Nina Totenberg. That, in turn, let them do something that most of the Internet rarely bothers with: Add context, nuance and heart to the joke.

So, blessed are they who spawn the memes. But let's not make this about them. By devoting a decent chunk of screentime to interviewing some of Ginsburg's hardcore millenial fans, RBG unintentionally demonstrates that no piece of "I Dissent!" merch, and no story behind that merch, will ever be as compelling as the woman herself.

The breezy yet engrossing film gains tremendous access to Ginsburg's home life and daily routine, and yes, those legendary workouts are real — she even gets to pump iron for the camera like Schwarzenegger. But Cohen and West, very smartly, also use Ginsburg's 1993 Senate confirmation hearing as a wraparound narrative device. As the fiery then-D.C. Circuit Court judge relays the defining moments of her career to the panel of old men who will soon vote on whether or not she can have her job, we cut back to memories of her in law school and her most significant arguments. (The result of those hearings? A 96-3 vote. The U.S. Senate near-unanimously confirmed a Clinton-nominated Supreme Court Justice. Let that sink in for a minute.)

Though Ginsburg has played a role in a great number of Constitutional issues, the film's focus is almost solely on her cases involving gender discrimination. And after seeing enough photos of a young Ginsburg, pretty and stoic and freakishly driven even at that age, as the lone feminine face poking out from a sea of men in law school, you'll be rooting for the revolution, too.

One of the key takeaways from the documentary, though, is that she does owe a certain amount of her success to one man in her life: her late husband Marty Ginsburg, who set aside his own career to throw his entire weight behind hers. While Ruth was staying up until 5 a.m. writing legal briefs, Marty was cooking and raising the children. The compassion and genuine sweetness emanating from Marty in archival videos is, to be frank, a sight for sore eyes — and could even be a guidepost for men today wondering how they can be better partners.

Cohen and West draw connections between Ginsburg's early experiences in the workplace and the arguments she would later make (as the co-founder and director of the Women's Rights Project at the American Civil Liberties Union, or, later, from the bench) to nudge the country toward equality. So an early sore point that, as a law school professor, she was being paid less than her male colleagues because she already had a husband with a good job becomes her successful argument for 1973's Frontiero v. Richardson, in which a female service member was denied a housing allowance for her husband equal to what the males got for their wives. And her memory of being one of only nine women in her Harvard Law School class of more than 500 informs her 1996 Circuit Court opinion that integrated the formerly all-male Virginia Military Institute. Folks were pretty mad at the time, but when Ginsburg later gives a commencement address for the co-ed graduating class of VMI, everyone seems pretty chill with her.

Throughout, the tone in RBG remains upbeat and cheerful, in that way the flashiest of documentaries today so often are. Her friendship with ideological opposite Justice Antonin Scalia is duly noted, as is her love of opera (you could make a whole movie from the footage of her in full regal garb, waiting outside the Kennedy Center to make a cameo appearance in The Daughter of the Regiment mere days after the election of President Trump). There is no serious attempt to respond to her critics on the right, other than insinuating, via an opening montage, that they are faceless and legion and not worth the effort. This film knows who its audience is. You're not listening to Ginsburg's arguments because you need to be convinced of them; you're listening because you want a reason to nod your head. And maybe more Tumblr fuel.