Accessibility links
The Fortnite Craze Might Be Here To Stay A video game analytics firm estimates that the cross-platform game with a wide range of players has made about $223 million in March alone. 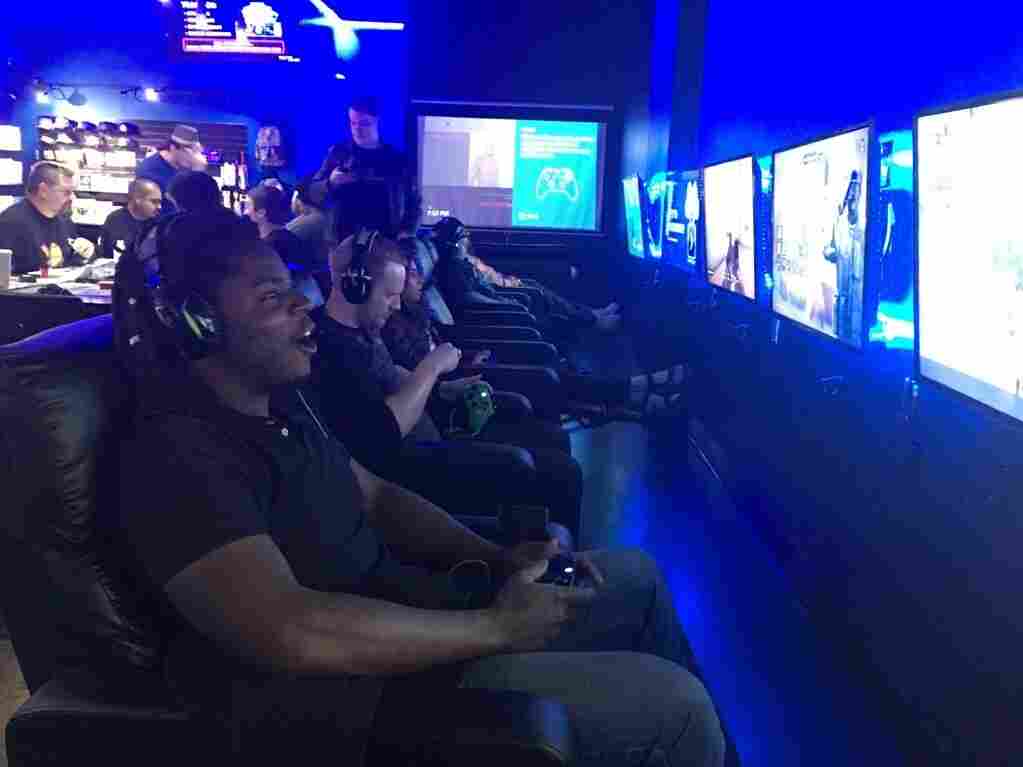 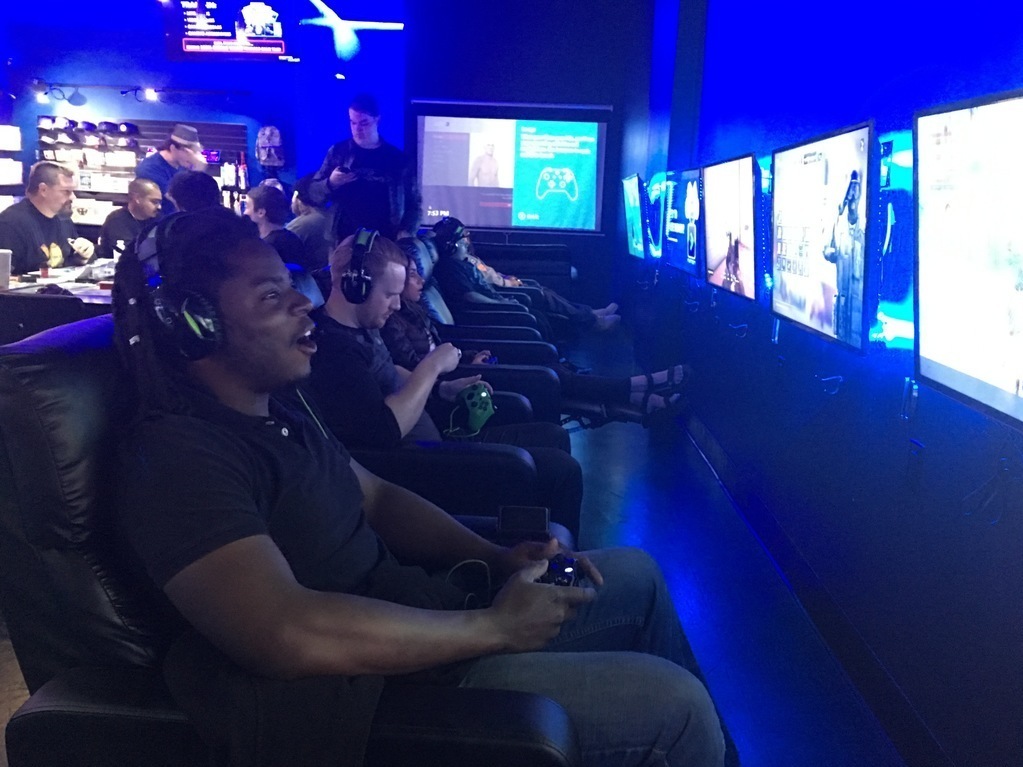 Horatio Monroe of Tracy, Calif., comes to PLAYlive Nation to play Fortnite every day after work. He says it relaxes him.

PLAYlive Nation, a nightclub-style video game lounge, is one big, dark room with club music playing in the background. Flat-screen televisions line the walls with XBox gaming systems plugged into each one. There's a big, comfortable chair for each television. Almost every screen is taken up by someone playing Fortnite.

In April, a PLAYlive Nation lounge in Tracy, Calif., hosted its first Fortnite tournament and sold out. Hundreds of players bought tickets to play against one another and win prizes. Matt Harris, who runs the Tracy branch, says he is now holding tournaments every few weeks.

"It just seems like everybody wants to play it," he says. "Even if I just mention it, people are like, 'Yeah! I'll play that!' versus trying to let people know about the other games we have."

Fortnite is a cross-platform game, played on computers, gaming consoles and smartphones. The game's premise is simple: Players sit in a flying bus that moves across a map. The player can drop down onto the map at any time and enter a battlefield. The player then has about 20 to 25 minutes to build fortresses, find supplies and kill other players until the last man is standing.

Since its release in September 2017, Fortnite has caused a major stir in the video gaming world by transforming casual video game players into avid ones.

Joost van Dreunen, the CEO of Superdata Research, a video game analytics firm, says most shooter games are serious and simulate violence. Fortnite, he says, is more like a friendly game of tag.

"It's more colorful, it has a more tongue-in-cheek aesthetic to it. It's cartoony. So for all of those reasons, it's much more accessible and much more friendly," he says.

His company estimates the game has made about $223 million across all platforms in March alone. In lifetime sales, it had made about $614 million. The game is free to play, but Epic Games, the company that owns Fortnite, makes money through microtransactions. Players can spend real money to make cosmetic changes to their characters in the game. They can buy things like skins, which are like costumes, for their characters or emotes, which are celebratory dance moves their characters can do after winning or killing another player in the game.

Catherine Garrett, a player from Athens, Ga., says she has spent about $70 on the game since downloading it.

"There's always just so many fun skins that come out that are limited edition, and you don't know if they'll be out again. Sometimes I just feel too tempted," Garrett says.

This is her first shooting game. Before playing Fortnite, she says she had never been one to spend hours on a game. Now, Garrett plays for two to three hours a night.

Garrett says she was initially attracted to the game because it didn't require much skill to win a round. "And it's such a short match that you just get to go in and do it again," Garrett says. "It doesn't take months to get that feeling of winning." When she's not playing, she watches other people play on Twitch, a streaming service for video games. Garrett says she especially likes to watch Ninja's streams.

Ninja, the gamer name taken by 26-year-old Tyler Blevins, is now a legend in the Fortnite world. He is a master at the game and rocketed into popularity after playing in an online battle with rap artists Drake and Travis Scott on March 14. That battle has been watched more than 9 million times.

What has been illuminating about the game is everyone seems to like playing it, from celebrities to high school teachers. Harris from PLAYlive Nation says he can see that wide demographic of Fortnite players, like Wissali Holman and her husband, Skyler. They decided to join the tournament as a fun date night idea.

"I actually walked by with my sister and I saw people playing Fortnite from outside and I was like, 'Oh my gosh, my husband would love this place!' " she says.

Married couples playing isn't a rarity, Harris says. "It goes anywhere from, on average, a 7-year-old all the way up to an adult. And it's pretty balanced, male to female as well," he says. "It just seems to have kind of brought a lot of people together under one platform, which generally doesn't happen in the gaming genre."

Van Dreunen from Superdata Research says the attention Fortnite has been getting is similar to the attention Pokemon Go got two years ago.

"Every time you have these breakout successes, there's a lot that goes on and a lot of attention on it for a few months, but these things persist," van Dreunen says. "In many ways, this is not just, 'Here's life and let's take a side road.' No. This is what life will be like. Gamers are fundamental to new behaviors."

Van Dreunen believes gamers act as a "canary in the coal mine" for understanding online and digital consumption — so perhaps Fortnite is less of a wave and more a milestone for how mass consumption of entertainment is shifting toward normalizing video game play.

Ohio Teacher Will Use 'Fortnite' Video Game In Final Exam

A previous version of this story misspelled the last name of Joost van Dreunen, the CEO of Superdata Research, as van Dreuner. In addition, the story incorrectly reported that Skyler Holman's first name was Skyla.