Accessibility links
'The Queen's Embroiderer' Stitches Up A Twisted Family Saga Joan DeJean's latest dive into French history starts with something simple — the appointment of a royal embroiderer. But then things get weird: inheritance fraud, elopements, double lives and more.

'The Queen's Embroiderer' Stitches Up A Twisted Family Saga

'The Queen's Embroiderer' Stitches Up A Twisted Family Saga 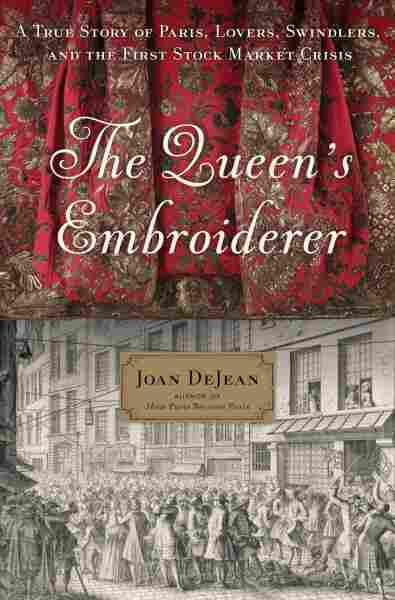 A True Story of Paris, Lovers, Swindlers, and the First Stock Market Crisis

Sometimes it can be such a comfort to forget current events for a little while and lose oneself in a nice cozy slice of history, a moment when a family of greedy, abusive, litigious frauds scrabbled for power using obsequious ingratiation, shameless lies, mounting debt, and outright cruelty — against a national backdrop of rapid economic shifts built on precarious foundations and exploited by corrupt government officials, so the rich got richer and everyone else was ruined. Plus, there's some embroidery!

The Queen's Embroiderer is the latest by Joan DeJean, who's authored half a dozen books about French history (How Paris Became Paris) and design (The Essence of Style: How the French Invented High Fashion, Fine Food, Chic Cafes, Style, Sophistication, and Glamour). The brief introductory note to this book suggests she ran into a needle-scratch moment in the middle of more conventional research: Jean Magoulet's appointment as the Queen's Embroiderer, alongside a 1719 royal decree that his daughter Marie Louise be arrested and shipped to Louisiana. That was undoubtedly a surprising fate for the daughter of a royal appointee.

Then she found out Jean Magoulet had made the request himself.

DeJean describes the impetus behind this book as her desire to unravel the love story between Marie Louise Magoulet and her husband (briefly), Louis Chevrot. But inevitably, the young lovers take a backseat to the generations of in-laws before them, who eventually reach such a cartoonish level of underhanded dealings that by the time DeJean is suggesting Jean Magoulet impersonated his own dead brother for years to facilitate a double life, she includes several original documents, as if she knows things are beginning to beggar belief.

And that, somehow, is not even the wildest data point in this story, which features guild-hopping, inheritance fraud, domestic abuse, eloping to England, sending toddlers to their deaths, locking the gates against the poor, and the occasional escape from a chain gang. There's an impressive depth of research — this is, as much as anything else, a mystery about the manipulation of record-keeping and identity — and it reveals an equally impressive depth of both determination and depravity in some of the family figures, but by the time she introduces John Law and the 1720 stock market crisis to provide a wider historical context, it's almost a footnote to the family disaster. That's quite a trick given the scope of that particular economic panic, but with nearly 30 major players, sheer generational entropy dwarfs everything else. (There is a detailed family tree at the front of the book; you will need it.)

... by the time DeJean is suggesting Jean Magoulet impersonated his own dead brother for years to facilitate a double life, she includes several original documents, as if she knows things are beginning to beggar belief.

Still, some aspects of the wider upheaval are striking, as DeJean builds a credible picture of the mania of a nation becoming an empire: Monarchy as economy, war as opportunity, slavery as profit margin. The legal system was so brutally patriarchal that it's a surprise — to us and to the author alike — when a woman gets any justice at all. Credit was trumpeted as a tool of social uplift by a financial bureacracy more concerned with the royal coffers than long-term stability; in the wake of the crash, a specialized police force was sent out to gather impoverished and unprotected people for deportation to Louisiana — where they would, presumably, be a boon to the royal coffers again. (Angry Paris mobs attacked so many of those deportation forces that the idea was soon abandoned.)

Given the nature of the family, the story is often so dour that sometimes only the historical minutiae keep you going. (If you ever wanted to know more about the fascinating probate-inventory process of 18th-century France, you're in luck.) But DeJean is so strapped for good news that in an attempt to scrape together a happy ending for anyone at all, she occasionally glosses over, say, the moral implications of why going to Haiti was good for business. A few survivors of the Chevrot and Magoulet debacles do manage to get out from their forefathers' shadows — and that there are so few loose ends in this two-century saga is a testament to DeJean's research (and a compelling argument for preserving historical records on a local scale, for that matter). But The Queen's Embroiderer lives largely in the place where petty men desperate to make themselves palatable to those in power poison their own family relationships, leverage a broken legal and government system, and leave a trail of trauma and destruction in their wake; a long shadow indeed.