Accessibility links
Melania Trump Unveils Her Policy Goals In Traditional First-Lady Style Melania Trump often stays on the sidelines. But Monday she outlined her initiative focused on children — at a moment when her husband is under intense scrutiny. 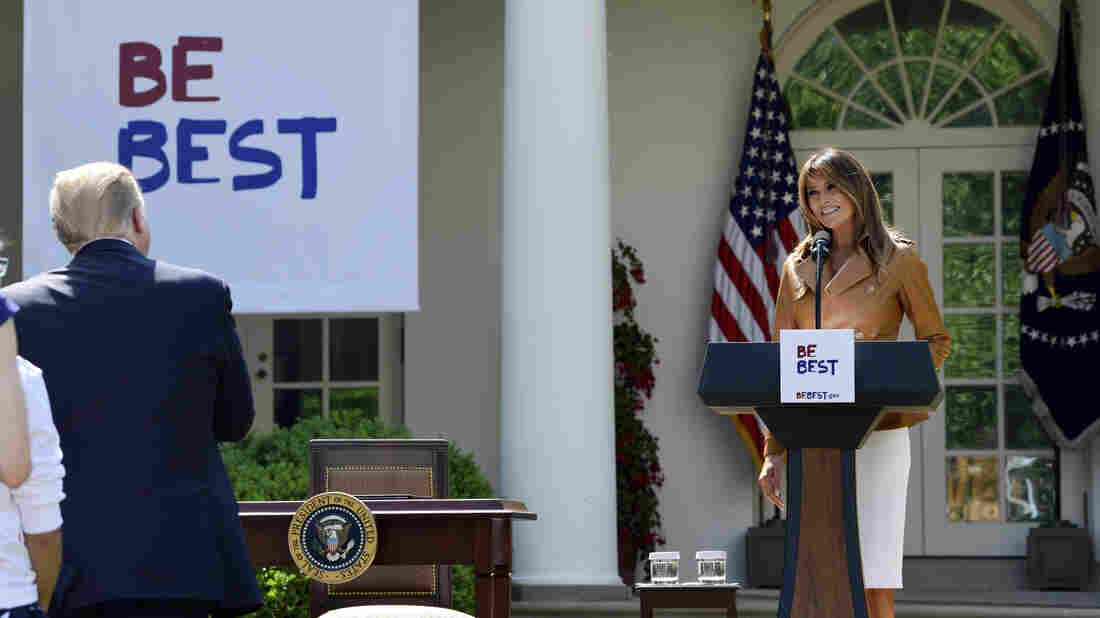 First lady Melania Trump looks at President Donald Trump as she arrives for an event where she announced her initiatives in the Rose Garden of the White House Monday. Susan Walsh/AP hide caption 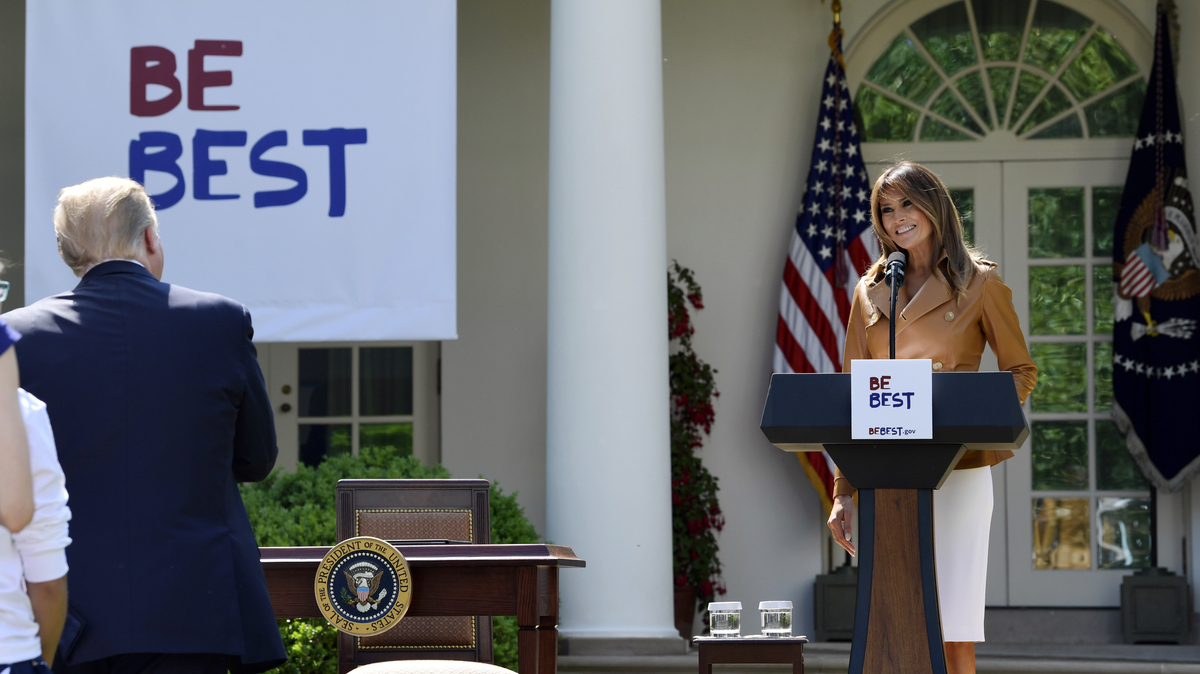 First lady Melania Trump looks at President Donald Trump as she arrives for an event where she announced her initiatives in the Rose Garden of the White House Monday.

Melania Trump often seems like a reluctant first lady. But she stepped into the spotlight this week to take on a very traditional part of the role.

Mrs. Trump unveiled a new initiative Monday, called "Be Best," which she said aims to educate children "about the many issues they are facing today." As President Trump looked on in the Rose Garden, Mrs. Trump outlined the initiative's three pillars: well-being, social media use and opioid abuse. "Children deserve every opportunity to enjoy their innocence," the first lady said.

The White House says "Be Best" will promote "values such as healthy living, encouragement, kindness and respect." It will also highlight the importance of using social media and the Internet "in positive ways." And it will support families and children affected by the opioid crisis.

Following her remarks, the president signed a proclamation and said the nation is "truly blessed to have a first lady so devoted to our country and to our children."

Monday's announcement comes at a moment when the president is under intense scrutiny.

Melania Trump rarely campaigned with her husband and waited months after his inauguration before moving to the White House. But she has made occasional appearances that offer clues about her priorities.

Her spokeswoman Stephanie Grisham tells NPR there are "many issues" facing children today, and that the first lady's initiatives will try to help them to handle those challenges. Grisham says the first lady will continue to focus on many of the subjects she has addressed in the past.

Even before she became first lady, Melania Trump waded into what might seem like surprising territory for the wife of Donald Trump.

"Our culture has gotten too mean and too rough, especially to children and teenagers," she said in a campaign speech in Pennsylvania just days before the 2016 election. There she talked about the downsides of the Internet, especially for kids who are bullied and mocked online.

The irony was hard to miss, as she acknowledged at a White House forum in March.

"I'm well aware that people are skeptical of me discussing this topic, but it will not stop me from doing what I know is right," Trump said. 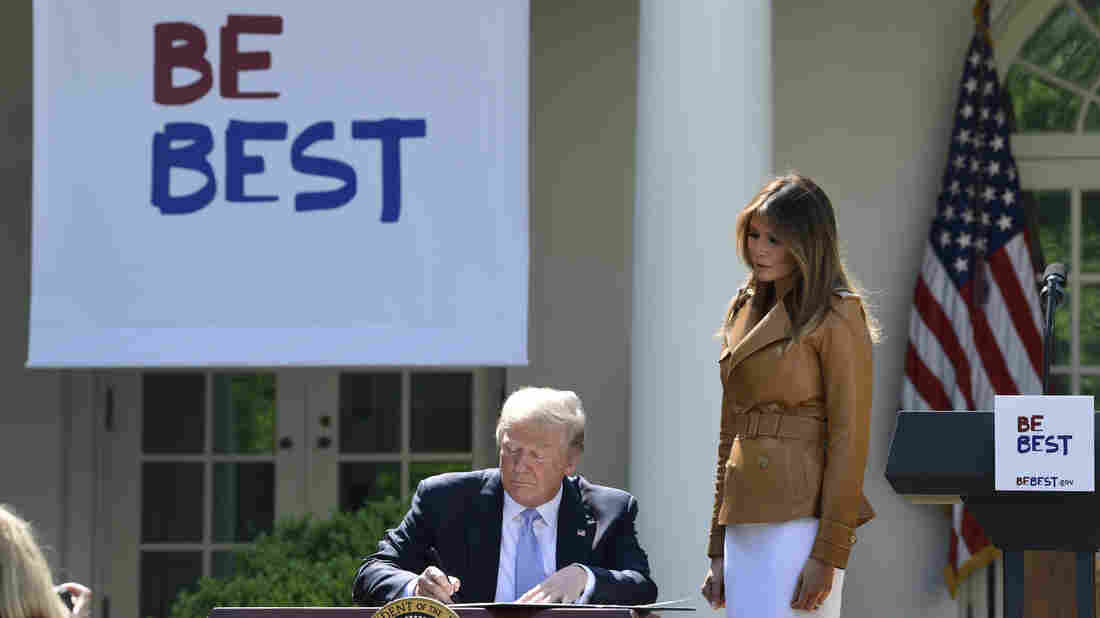 President Donald Trump signs a proclamation as first lady Melania Trump watches during an event where the first lady announced her initiatives in the Rose Garden of the White House Monday. Susan Walsh/AP hide caption 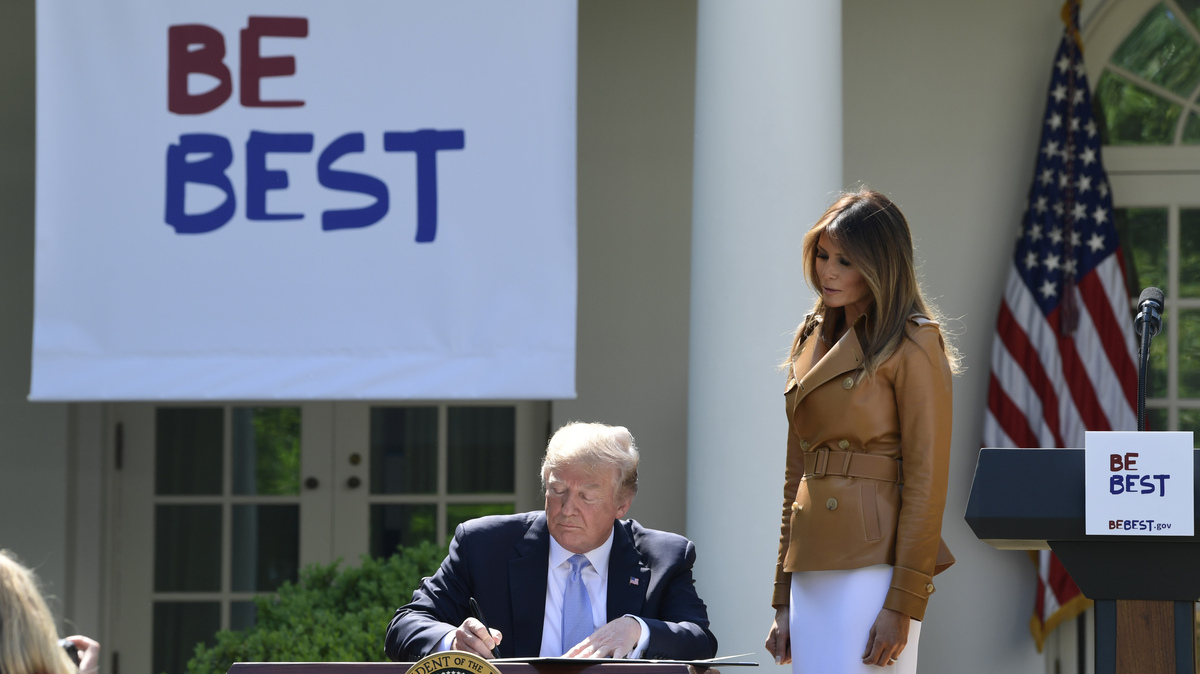 President Donald Trump signs a proclamation as first lady Melania Trump watches during an event where the first lady announced her initiatives in the Rose Garden of the White House Monday.

Social media and its effect on children will be one part of Melania Trump's agenda, Grisham said before Monday's event. Children and opioid addiction will also be a priority.

In a speech to the United Nations in September 2017, Trump talked about several issues affecting children, including bullying, poverty and addiction. In October, she traveled to West Virginia, where she visited a treatment center for infants exposed to opioids.

She returned to that subject at a White House event on opioids later that month, where she said, "addiction affects children in many different ways, and I have recently taken a larger interest in what I can do to help fight this epidemic."

No playbook for first ladies

Presidents' wives have often found both themselves and their platforms under intense scrutiny.

Speaking in 2013, then-first lady Michelle Obama acknowledged the unwanted attention on her appearance — from her shoes to her bangs. But she said despite that, being first lady gave her a big opportunity.

"We take our bangs, and we stand in front of important things that the world needs to see," Obama said.

More recently, Nancy Reagan was known for her involvement in the "Just Say No" anti-drug campaign. Obama tackled childhood obesity with her "Let's Move" campaign, which drew the ire of some of her conservative critics.

Peter Slevin, who teaches journalism at Northwestern University and wrote a biography of Michelle Obama, says there's "no playbook" for how a first lady should operate. He says each presidential spouse must develop her own set of priorities and plan for executing them.

Slevin says that may be especially challenging for Melania Trump.

"She's dealing with a White House that is not exactly good at delivering a consistent message," he says. "And in her own case, she comes with no experience at all in politics; even as her husband was running for office, she was in the background."

Even so, Melania Trump is pressing forward with her plans almost as if nothing has happened.

A Look Back At Melania's Time As First Lady

Myra Gutin, a historian of American first ladies at Rider University, says some president's wives would have been put off by the controversies swirling around the White House — but not Trump.

Gutin said the decision to focus on children is a good one, and in line with what past first ladies have done.

"She seems to be at her best when she's with young children, visiting them in the hospital, reading to them," Gutin says. "It just brings out a naturalness in her that I haven't seen in other situations."

Gutin said first ladies tend to be more popular than their spouses — which could give Melania Trump a chance make progress on her goals, regardless of what her husband is doing.