Accessibility links
'Undead Girl Gang': Mister, They ARE The Weirdos In Lily Anderson's debut novel, a string of suspicious deaths prompts teen witch Mila to try to solve the mystery by raising the dead girls to ask who killed them — but of course, it's not that easy.

'Undead Girl Gang': Mister, They ARE The Weirdos

'Undead Girl Gang': Mister, They ARE The Weirdos 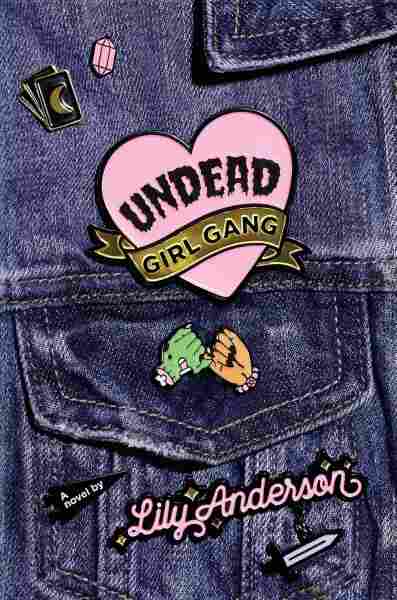 Novel writers are encouraged to have an elevator pitch — a one-sentence summary of their book that will grab the attention of anyone stuck in a small space with them for the time it takes to move from one floor to the next. It's hard to do right, and some books just aren't high-concept enough to make it work. So when I say that Undead Girl Gang has the new-crowned queen of elevator pitches, it's worth paying attention: When girls start dying under suspicious circumstances, a teen witch raises the dead to figure out who done it and get revenge.

Pretty fantastic, right? Everyone I've tried this pitch on has had the same reaction: I want to read that! I felt the same way, so I went into Undead Girl Gang with high levels of anticipation. I was expecting something dark, something funny, and something with teeth. Can any book live up to such a great pitch?

When Mila Flores' only friend — and fellow Wicca practitioner — Riley dies under suspicious circumstances, she knows it wasn't suicide like everyone thinks. That just doesn't make sense, especially not right after the equally suspicious double suicide of two of the most popular girls at school. She knows in her bones that there's a killer to catch, and when no one is interested in listening to her, she uses a mysterious grimoire to bring back the only people who care enough to help: the dead girls themselves.

Mila thinks it'll be a simple issue of asking the girls what happened to them, but they all come back with no memory of their last few days of life. Mila tries to rally them into a team of undead detectives, but they all have other unfinished business distracting them, and if they aren't careful, it may prevent them from catching their killer — or even provoke another murder.

As someone who spent several teenage years in a two-girl coven, trying to divine the future and lure romantic prospects into my magic web, I can vouch for the realism of Undead Girl Gang's hocus pocus. It perfectly captures the dynamic of two insecure teens trying to work together to assert some power in a world where they feel unnoticed and helpless. One of them believes in it, one of them wants to but mostly goes along with it to belong to something — it's all very familiar.

I also had a good laugh about the new age shop where they go for their supplies — I can practically smell the incense, and vividly remember coveting items that felt like they might hold the key to something real and ancient, if only I had enough pocket money to afford them. The actual magic Mila does feels very earthy and gritty, full of rotting corpses, DNA from shared lip gloss, and a very evocative use of creepy mushrooms. All of the books, bells, and whistles are perfectly rendered, as are the ever-shifting friendships between the girls.

All of the books, bells, and whistles are perfectly rendered, as are the ever-shifting friendships between the girls.

These friendships are ultimately the heart of the book. Mila thinks that with her one and only friend gone, she is doomed to be alone, but is eventually able to figure out that it's never too late to make new friends — dead or alive! I am always here for a story that's primarily interested in female friendships, and I love the idea of getting a second chance to get to know someone even after it's technically too late.

The one thing that felt like a bit of a letdown was the mystery of who done it. Tracking down a possible murderer is the plot of a thriller, and Undead Girl Gang just isn't that interested in committing to the genre because it's having too much fun doing other things. I saw the reveal coming from nearly the beginning, because there are never enough viable suspects to keep a reader guessing, and it's not the most satisfying conclusion for such an engaging story.

But ultimately, who done it is not the point, despite the elevator pitch. This is a fun, fast read that really takes me back to my own teenage experience, and I think it will resonate with readers who dabble in any sort of arts, dark or otherwise.