Accessibility links
'Free Woman' Is An Uncompromising Look At An Unconventional Writer Lara Feigel's new book is a combination memoir and celebration of the writer Doris Lessing — whose famous distaste for convention led her to exclaim "Oh, Christ," upon winning the Nobel Prize.

'Free Woman' Is An Uncompromising Look At An Unconventional Writer

'Free Woman' Is An Uncompromising Look At An Unconventional Writer 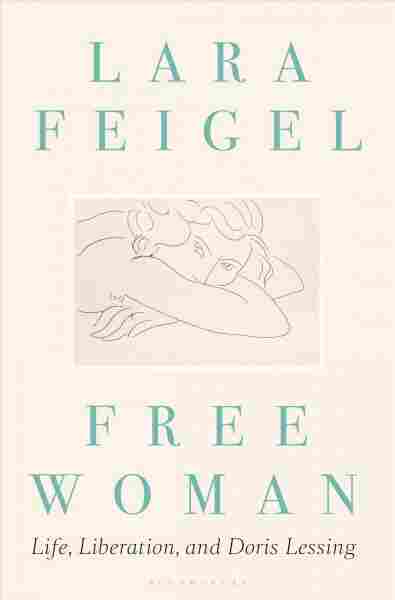 Some books — not many, but a few — are vastly affected by the moment in which you read them. Not moment in history, or in your life. I mean the exact circumstance in which you sit down and crack the spine. For me, Lara Feigel's Free Woman, a combination of memoir and Doris Lessing biography, is one of those books. I read it on a late-night train home from New York, in that public-private Amtrak silence, with my boyfriend asleep in my lap so that every few pages, I could look down and think, Are you obstructing my freedom?

I knew the answer already: a resounding, happy No. It's a testament to Feigel that her book could make me ask. But for Free Woman to succeed, she had to. The book takes shape around that question, as asked by women to the men they love: How have you made me less free?

The book's central women are Feigel, a writer and critic who teaches English at King's College London, and Doris Lessing, the great British novelist who, in the year 2018, is perhaps most famous for saying, "Oh, Christ," rather than "Thank you," when she learned she'd won the Nobel Prize. Lessing was a woman not bound by convention, including the convention of gratitude. She did what she wanted, or what she felt necessary. She was deeply, explicitly committed to freedom, in her politics and her personal life.

When Free Woman opens, Feigel is feeling bound, and bounded, by nearly everything. She prickles at weddings, at her own marriage, at motherhood and at her struggle to get pregnant a second time. Reading Lessing's seminal novel The Golden Notebook, she begins to understand why she is so uncomfortable in her outwardly stable and fortunate life. "The questions troubling [the protagonist] Anna," she writes, "troubled me: how as a writer to write stories you believe in while constructing books ... that people would actually want to read; how as a woman to reconcile your need to be desired by men with your wish for sexual equality; how to have the freedom of independence while also allowing yourself the freedom to go outside yourself through love."

'Lonely City' Is More Than A Cry For Connection

So she takes Lessing on as a guide; by exploring Lessing's life and work, she will figure out her own life and work. This mix of memoir and literary criticism is a growing genre, and one I love. There's Kate Bolick's Spinster, Rebecca Mead's My Life in Middlemarch, Helen MacDonald's H Is for Hawk, and best of all, Olivia Laing's The Lonely City. Notice, here, that I'm only naming women. As a literary trend, I'm not sure what that means. I enjoy this form — let's call it critical memoir — deeply, and yet I worry it's a strategy, a way of claiming a canonical respectability that male authors feel is already their right.

If that's true, the choice of Doris Lessing as subject is a clever one. Who could be more canonical than a Nobel Laureate? Yet by writing about Lessing, Feigel commits herself to writing about some highly unrespectable things. She dives into Lessing's bad parenting, her beliefs about "real men," her excursions into psychiatrist R.D. Laing's theories of insanity and acid. She devotes a chapter to debunking Lessing's strange and rude taxonomy of orgasms, writing about her own with impressive frankness.

All this, Feigel notes, all this makes her friends nervous. "They worried," she writes, "that I was dislikeable, while admitting that in real life they liked me for precisely the honesty and self-questioning that I was exhibiting. I wondered if they'd have felt this anxious if I was a man."

'Free Woman' is worth reading as a piece of complicated thought, and one that's funny and sexy and frank, to boot.

The answer is an obvious no, and Free Woman is strongest when it sets out to debunk that anxiety. In one particularly excellent riff, Feigel describes Lessing's flight from the public self as "the hostess [who] kept performing — 'bright, helpful, attentive, receptive to what was expected." As a writer, Lessing was never receptive to what was expected. The Golden Notebook is a fragmented, experimental triumph, and in her later work she broke a great boundary, crossing from realism into science fiction. She may not have been a wholly free woman, for the sole and obvious reason that no one is, but she was a free writer.

On freedom as a woman, though, Feigel is exceptional. This is just as true when she writes about Doris Lessing, or her characters, as when she writes about herself. She embodies Lessing's "determination to always be complicated: to question everything — not only what those around her thought, but what she herself thought." Critical memoir can do this better than any other form. Free Woman is worth reading as a piece of complicated thought, and one that's funny and sexy and frank, to boot. And if you haven't read The Golden Notebook, don't worry. I promise, you'll go buy a copy the moment you're done.