Accessibility links
'Life Of The Party' Favors McCarthy's Gentle Warmth Melissa McCarthy stars as a mom who rediscovers her identity at college in a comedy that brings out the actress/co-writer's sweet and sunny side. 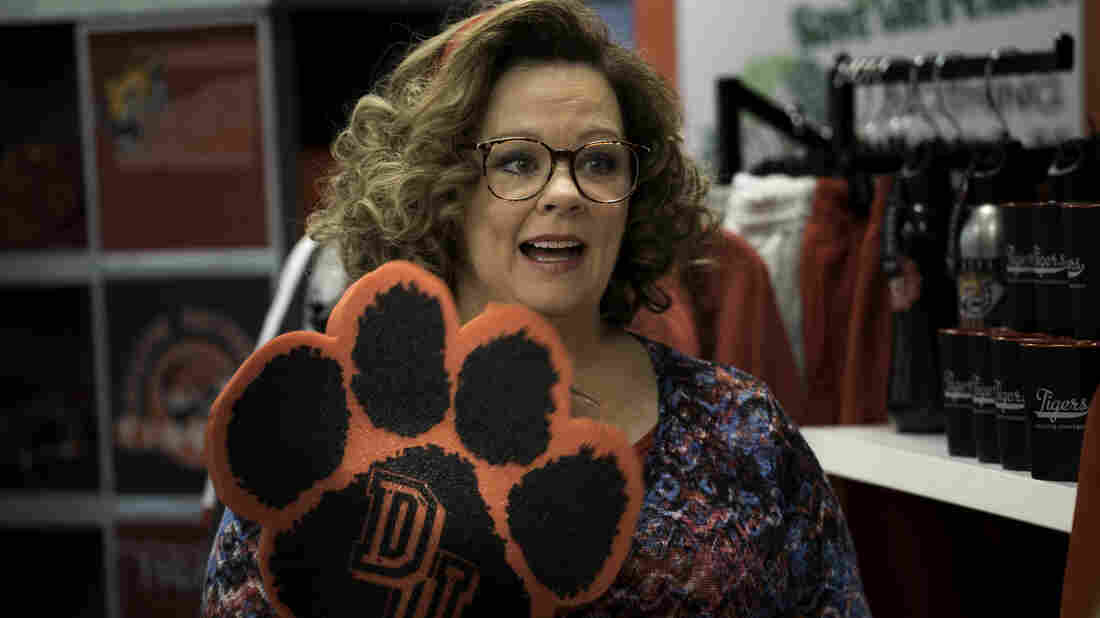 A midlife crisis spurs Deanna (Melissa McCarthy) to enroll in college, much to the chagrin of her daughter who goes to the same university. Hopper Stone /New Line/Warner Bros. hide caption 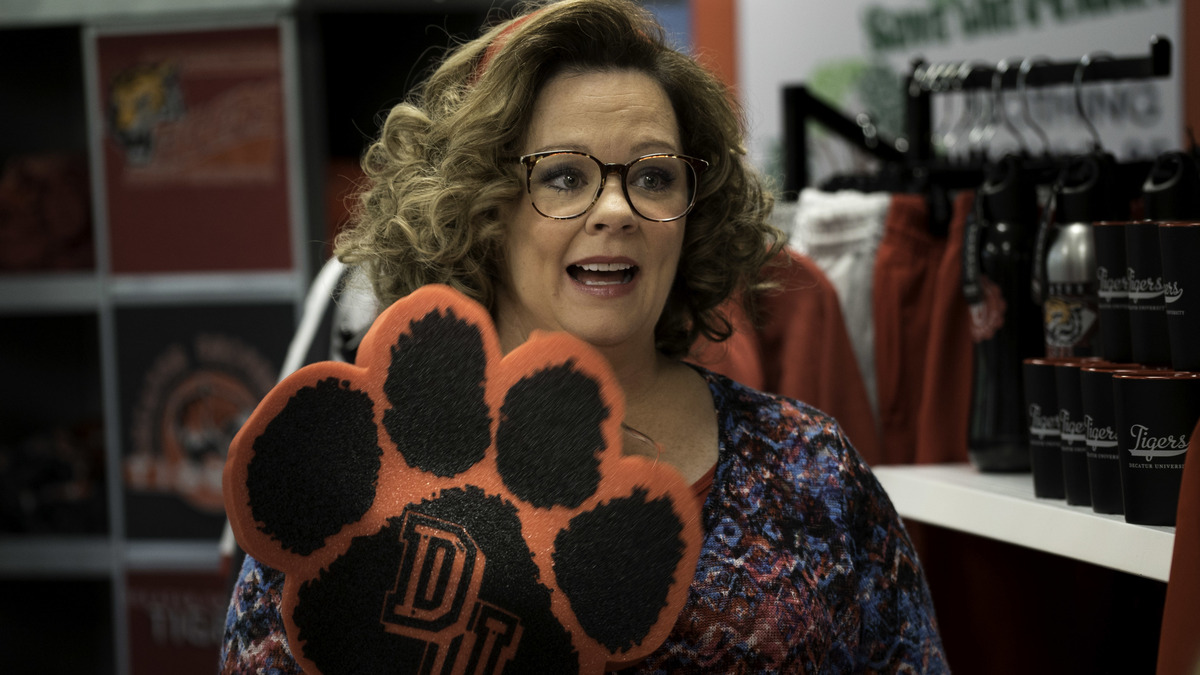 A midlife crisis spurs Deanna (Melissa McCarthy) to enroll in college, much to the chagrin of her daughter who goes to the same university.

Her first big role was on Gilmore Girls, where she played the gentle, funny, burbling Sookie St. James. Sookie's dimples, her delightful chirp, and her unrelenting sunniness could have sunk the character as a little bit of a sap, but McCarthy carried it off, using about 10 percent of what she turned out to be capable of.

The friend she played in Bridesmaids -- whom she said in interviews was partly based on Guy Fieri — showed a darker, stranger, much more aggressive side of McCarthy, and that side carried her through Identity Thief, The Heat and Tammy. (Of those, The Heat was well received, and the other two, not so much.)

Spy -- not only her best leading role but one of the best comedies of the last 20 years — mixed the two, transforming her from a quiet office worker to an action hero. While other films have played with her image, Life Of The Party (directed by her husband Ben Falcone and written by the two of them together)is the first film that leans so fully on the sweet side of her, with results that are more conventional than her best work but funny and sweet nonetheless.

McCarthy plays Deanna, a mom who's just dropped her daughter Maddie (Molly Gordon) off for her last year of college. No sooner have Deanna and her husband Dan (Matt Walsh) kissed the kid goodbye than Dan is giving Deanna the kiss-off as well. It turns out he's off to marry a realtor (played by Julie Bowen, who gets to have quite a bit more fun here than she has on Modern Family). Deanna doesn't know what to do with herself, so she decides to finish college — at Decatur University, where her daughter goes.

If this reminds you a little of the Rodney Dangerfield comedy Back To School, you're not entirely wrong. Both show parents who share a college experience with their kids. But there's a warmth to this story that's all about McCarthy and the relationship she has with her daughter's friends.

One very clever decision was to bring in Gillian Jacobs, who is in her mid-thirties, to play one of the friends. There's a hand-waving explanation for why she's playing a college sophomore, and it allows Jacobs to lend a marvelously dry, confidently offbeat note to the film. Particularly given the years she spent playing Britta on Community (who was often written as a no-fun killjoy), it's great to see her back in college, this time with friends who actually like her. Also on hand as McCarthy's best friend is Maya Rudolph. Rudolph's scenes with Damon Jones, who plays her husband, are few in number but great in impact.

There's not a lot to this film in terms of story, and there's almost nothing you won't expect, especially if you've seen the trailers: Deanna gets a de-frumping makeover to fit in better in college, she learns confidence, she bonds with Maddie, she gets revenge on Dan (in one of the film's best scenes), and she triumphs. It's that kind of movie. The jokes aren't as good as the ones in The Heat and Spy (both products of her relationship with director Paul Feig and, in the case of The Heat, writer Katie Dippold). That means the film's humor is more reliant on McCarthy's delivery to elevate scenes, and in less skilled hands, the whole thing would seem even more slight.

But there is something awfully winning about the way Maddie and her mom genuinely like each other — while Maddie squirms at some of the togetherness of having her mother around, for the most part, they have fun. And this might also be the first lead role McCarthy has had since The Gilmore Girls that embraces her as a conventionally attractive woman with an active sex life, the existence of which isn't played for comedy.

This isn't necessarily A-plus Melissa McCarthy material, but it's also not the kind of thing that makes you wonder — as Identity Thief did, for instance — what she's doing. It's a diverting vehicle for a solid comedy star, and if you feel like it might be for you, you probably won't be disappointed.