Accessibility links
Ranchers Sour On Trump Administration Over Proposal To Bring Back Grizzly Bears Some rural leaders in Washington state say they felt blindsided by a surprise decision to restart a grizzly reintroduction plan.

Listen · 6:18 6:18
Ranchers Sour On Trump Administration Over Proposal To Bring Back Grizzly Bears 6:18 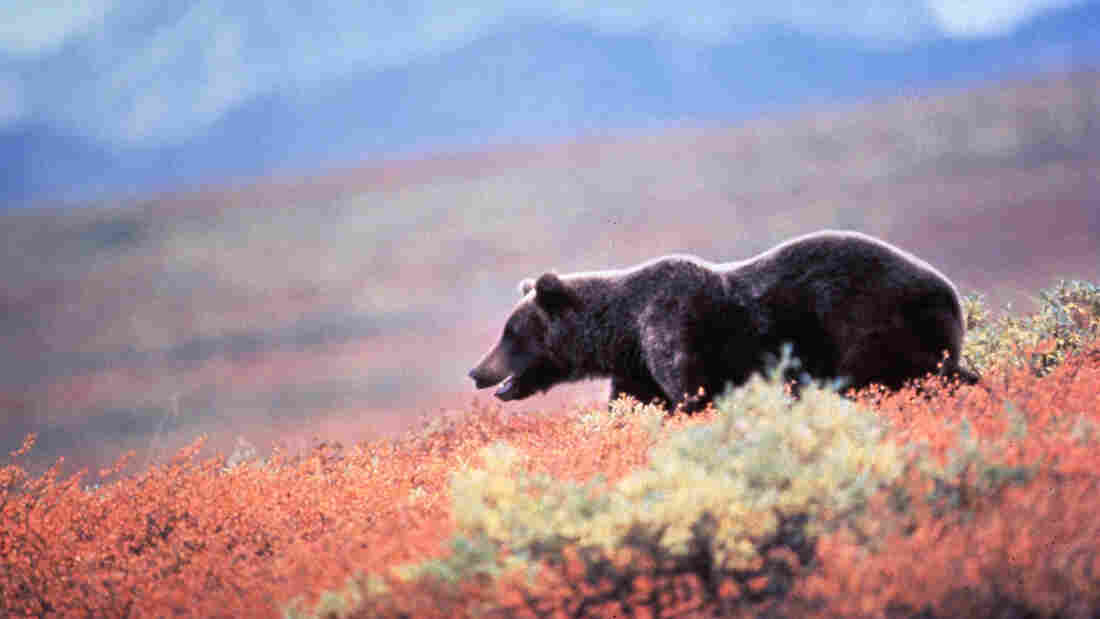 Some ranchers in Washington state fear reintroducing grizzlies, like this one seen in Alaska, will bring a "catastrophic" threat to their livelihood. Getty Images/Getty Images hide caption 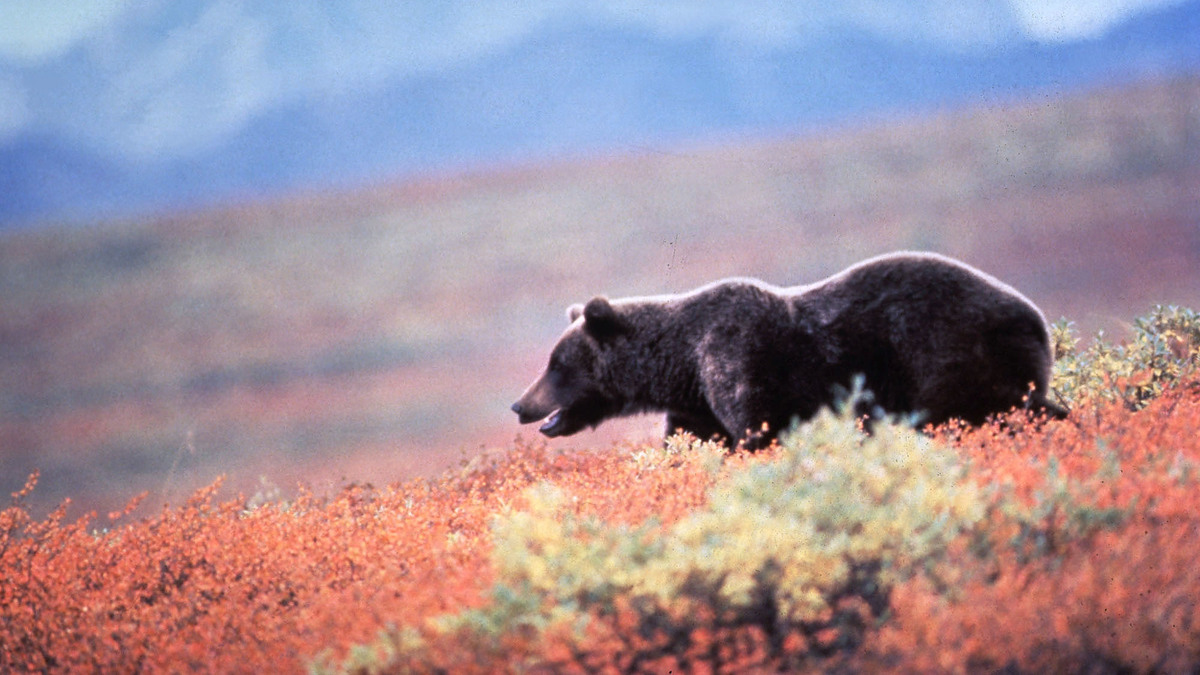 Some ranchers in Washington state fear reintroducing grizzlies, like this one seen in Alaska, will bring a "catastrophic" threat to their livelihood.

Rancher Craig Verasjka enthusiastically voted for Donald Trump and his support for the president's interior secretary, Ryan Zinke, had been unwavering. Finally, he recalled thinking after the election, when making land management decisions the federal government might give a friendlier ear to rural Americans who rely on public lands to make a living.

That honeymoon appeared to end abruptly this Spring, however, when Secretary Zinke paid a surprise visit to North Cascades National Park, announcing he was restarting a stalled Obama-era plan to reintroduce grizzly bears.

"What the hell do we do? We thought we had somebody on our side and now Zinke pulls this on us," Verasjka says, "We're not happy."

On a recent chilly morning, Verasjka was tending to his cows in one of his winter pastures near Omak, Wash. The snow-capped Cascades loomed in the distance off to the west. When the snow melts, the cattle are moved into the mountains where Verasjka holds permits for grazing on U.S. Forest Service land abutting the national park. It's near the same area where an estimated 200 grizzlies could soon be reintroduced into the wild. 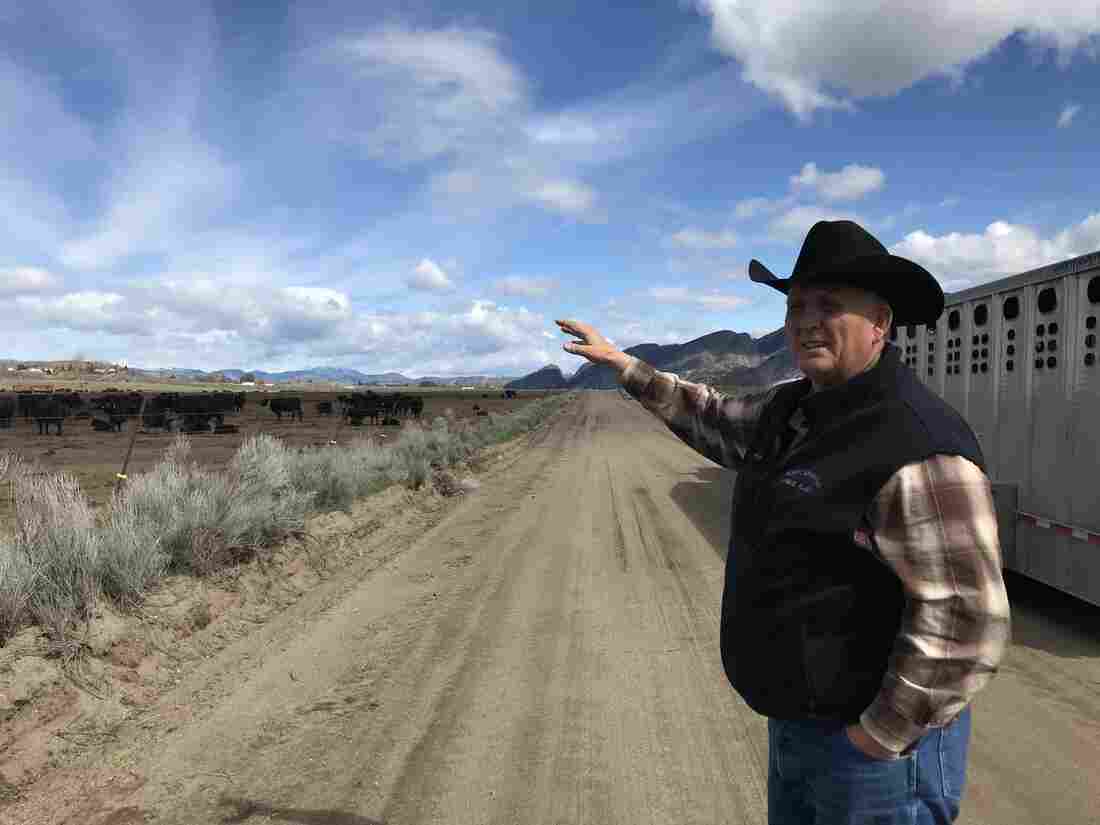 "We thought we had somebody on our side and now Zinke pulls this on us," rancher Craig Verasjka says. "We're not happy." Kirk Siegler/NPR hide caption

"It'll be catastrophic," Verasjka says, who considers the predators a potential threat to his livelihood. They'll kill his cows, he fears, or at the very least stress them, keeping them on the move and deterring them from breeding.

"I mean the guy [Zinke] flies to the Northwest in a 48-hour period and makes a decision like that not consulting a person like myself who's spent a lifetime here," Verasjka says.

There is anxiety over grizzlies in remote central Washington's Okanogan County, a large river-carved plateau of sage brush country about 40 miles south of the Canadian border. Ranchers like Verasjka worry the bears will roam east of the mountains looking for food. The county is also home to some of Washington's most productive and lucrative fruit orchards. And some locals will tell you privately they feel like they're being scapegoated by the interior secretary, who needs an environmental "win," they say, after presiding over a historic reduction in federal land protections at two national monuments in Utah.

A Zinke spokeswoman declined an interview request by NPR. But when the former Montana congressman visited North Cascades National Park in March, he said he grew up around grizzlies and had great respect for them.

"I'm in support of the great bear," Zinke said. "I'm also in support of doing it right, this is not the reintroduction of a rabbit."

Grizzly reintroduction in the Cascades is far from a done deal, however. And the bears' possible impact on cattle is just one of a list of issues to be addressed in a revised environmental review by the Department of Interior.

Zinke acknowledged to the small crowd of reporters and invited guests assembled that day that it may take people in Washington a little time to adjust to having the bears around. There have been a few sightings of the occasional grizzly wandering into the state from British Columbia, mostly on the west side of the Cascades, and very few since the 1990s. 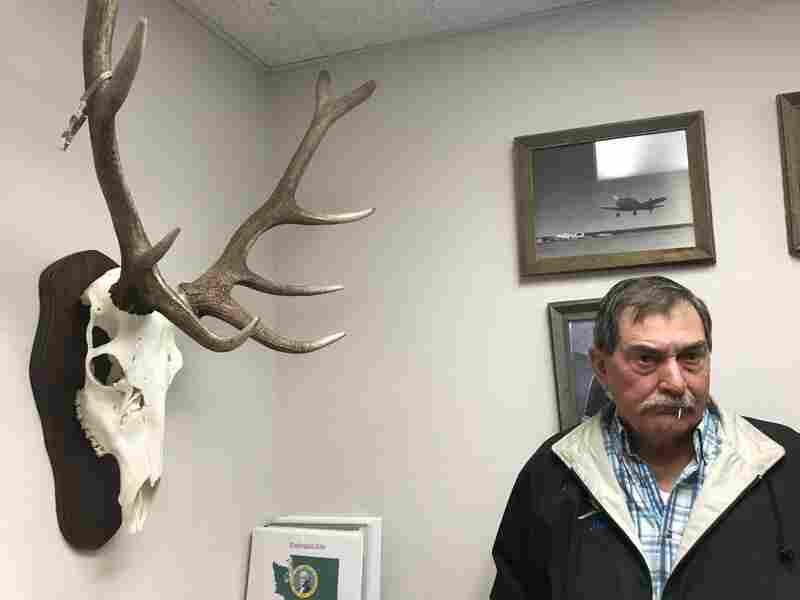 Okanogan County Commissioner Jim Detro says urban environmentalists want to reintroduce the bears with little regard for people in rural areas who will have to deal with the consequences. Kirk Siegler/NPR hide caption 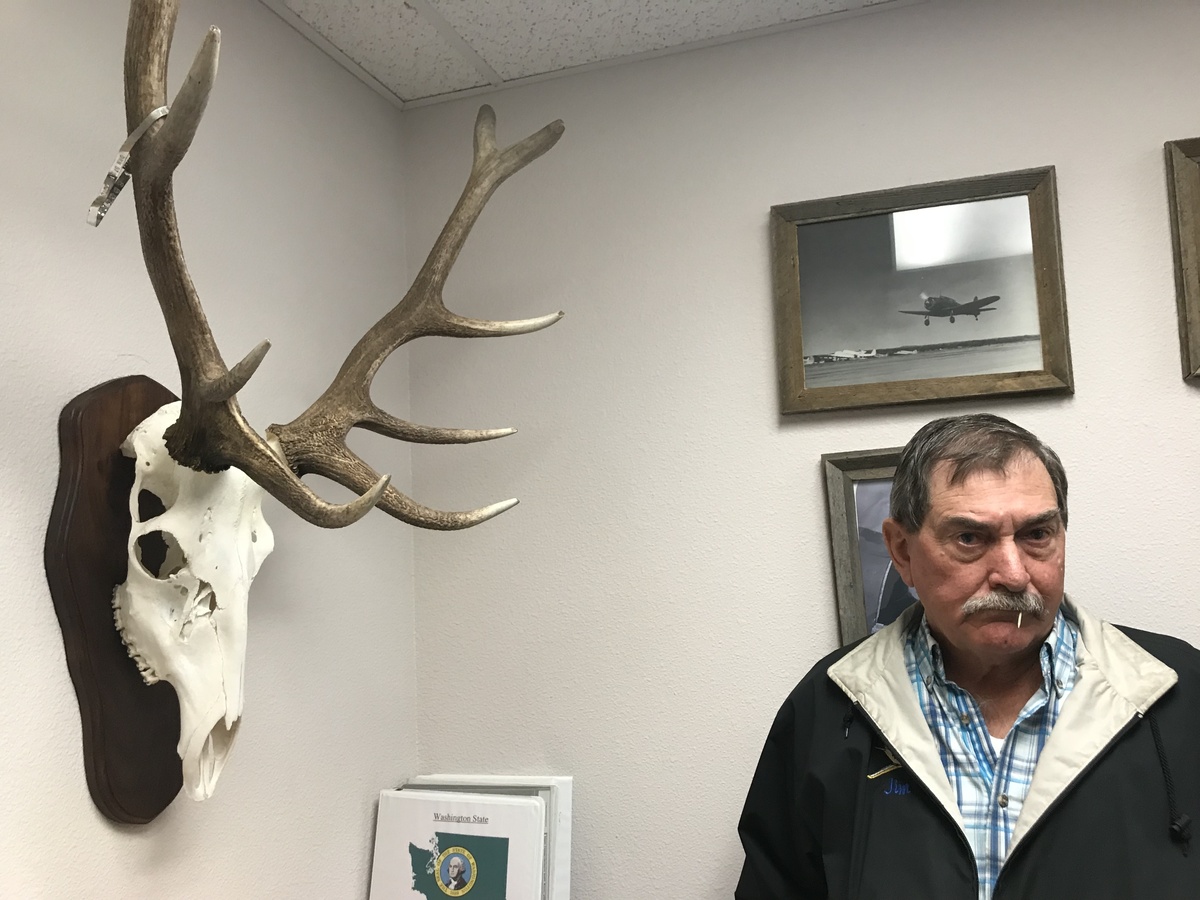 Okanogan County Commissioner Jim Detro says urban environmentalists want to reintroduce the bears with little regard for people in rural areas who will have to deal with the consequences.

East of the mountains, people still talk about a famed grizzly that reportedly "terrorized" the area back in 1958. In his office, Okanogan County Commissioner Jim Detro keeps an old cast mold of its large paw print alongside a local newspaper article recounting the bear's clashes with local cattlemen.

"I can run out on my back porch and scream and scare the hell out of a black bear, you're not going to do that with a grizzly bear," Detro says. "They'll hunt you up."

Detro was not invited to the secretary's announcement, nor were many other county commissioners from around the region. He says that unlike in the secretary's home state, there are too many people and too many businesses living too close to where the grizzlies could roam. But Detro also speculates there's a broader agenda to reintroduce them being pushed by environmentalists in well-heeled cities like Seattle.

"We could all get along if those guys weren't over here trying to ram their idea of how we should live down our throat," Detro says.

In interviews, environmentalists in the Northwest say they were just as surprised by Zinke's announcement as officials in Okanogan County. And they say there is plenty of room for a couple hundred grizzlies in a recovery zone that encompasses an estimated 10,000 square miles.

Scott says grizzlies generally avoid humans unless we give them a reason to be a nuisance, like leaving trash out. In states to the east of here that have grizzlies, namely around Yellowstone and Glacier national parks, Scott says problem bears are dealt with quickly. The recovery of the once endangered grizzlies in that region has largely been seen as a success by the federal government. At least one state is even planning to resume hunting of the animals.

Meanwhile, not everyone in Okanogan County is fuming over the DOI's surprise announcement either. Central Washington is also home to a large Native American population, and some tribal members were encouraged by the secretary's announcement, particularly his recognition that tribes consider grizzlies sacred.

The bears symbolize strength and courage, according to Lorrie Sue Nelson, a descendant of the Colville Tribes who lives and works in Omak, Wash.

"They have the right to be here before any other species because they were indigenous to this area since the beginning of time," Nelson says.

Nelson says she recognizes that farming and ranching are hugely important to the area's economy, but those things came later, with little say or input from her people.

"The invader here is the cattle industry," Nelson says.

Secretary Zinke has said he wants a final decision made by the end of the year.