Accessibility links
Taking The 'Journey' Through Alzheimer's Together Winston and Pansy Green are doing their best to live a normal life. But they've had to adjust to the loss of what Winston calls "little things" day by day and year by year. 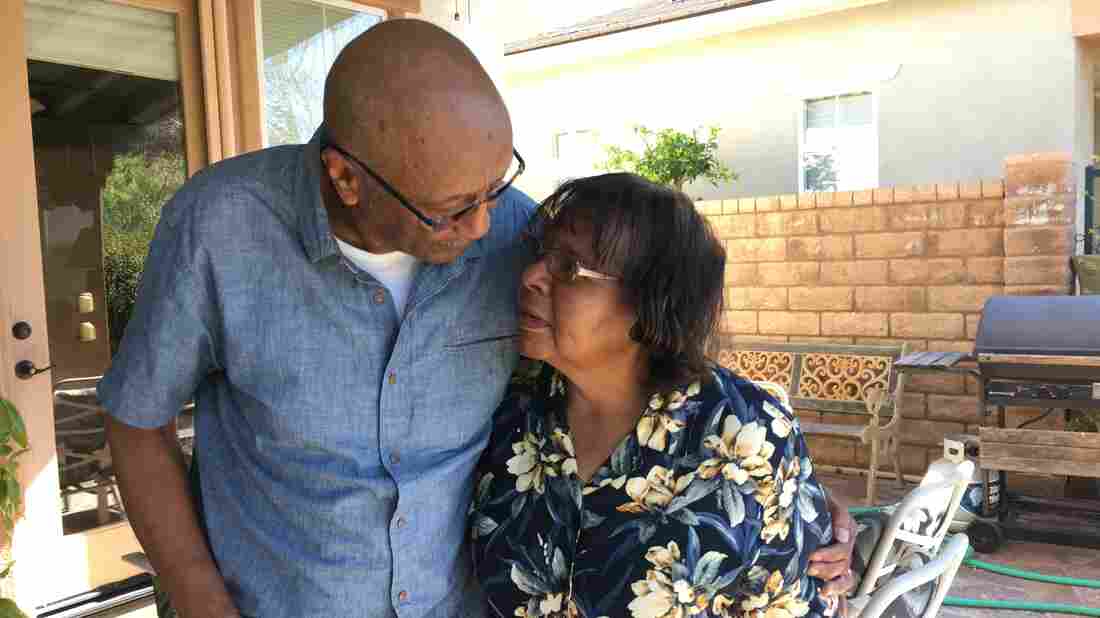 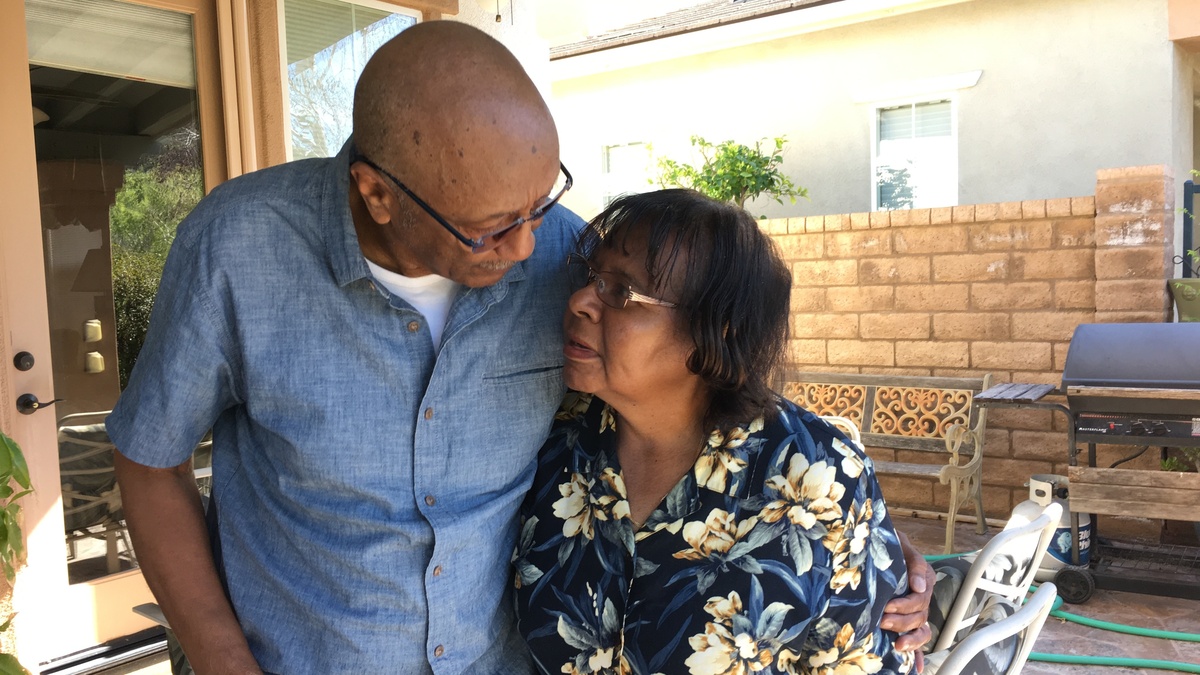 Winston and Pansy Greene at their home in Valencia. Calif.

Pansy Greene is one of 5.7 million Americans who have Alzheimer's disease. She and her husband Winston call her illness part of their "journey" together.

They're doing their best to live a normal life, but they've had to adjust to losses day by day and year by year. For example, Pansy doesn't cook any more. Winston points to the stove in the kitchen of their suburban home, north of Los Angeles. "No knobs," he says. "We just take off all the knobs because with this disease, Pansy might come in and turn [it] on. Gas may be escaping. Anything could happen."

Winston calls this one of the "little things" that have changed for the couple since Pansy's diagnosis eight years ago. But the list of "little things" keeps getting longer. Pansy used to talk more. She's pretty quiet now. Pansy used to pay the bills. Now Winston does. She used to do the laundry. That's also Winston's job now, though Pansy doesn't want to hear it.

Read More About The Greenes

"Since when do you do that?" she asks with irritation in her voice. Winston soothes her: "Well, you do the folding up. You help out too. We do it together."

The Greenes have been doing everything together for 61 years. I've stayed in touch with them for the past five. In our first interview in 2013, they told me that they met at a party when Pansy was just 16 and Winston was 18.

"And he didn't let go of me the whole night. He wouldn't let anybody else dance with me," she laughed. Winston recalled, "I had just moved here from New York and I thought I was better than sliced bread."

They married not long after they met, raised three daughters, and spent decades working in the aerospace industry. Pansy worked on the space shuttle, Winston on the B-1 bomber. Now, at the age of 80, his full time job is making sure that he and Pansy have days that are as full as he can make them.

So five days a week, they have lunch at the Santa Clarita Valley senior center.

It's a lively place where a diverse crowd of older adults gather at long tables to dine and schmooze. There's even live entertainment, as the musicians in the crowd take advantage of the piano in the corner.

Winston explains to his lunch companions why they're letting me tag along. "It's not for us," he assures them. Talking to me is part of his and Pansy's mission to raise awareness of Alzheimer's disease, particularly for other African-Americans, who are especially at risk.

More Than A Job: Home Care For A Mom With Alzheimer's Disease

"Too many people have Alzheimer's and it's hush hush," he says, adding that he and Pansy can help people just "by being advocates and talking about it."

Winston could probably make sandwiches at home. But he knows that the social stimulation here is important for Pansy. And she does perk up. She smiles. She gets chatty. She gets curious.

She wants to know how I am. She wants to know what my recording equipment is for. She says she likes seeing the people here every day. It can be tiring, but she persists "to make myself more spiritual to God."

Winston notices the difference in her. You're doing a lot of talking, he tells her. "I've got to think of things to talk about so we can talk all day long." Pansy laughs. "Not too much," she teases. She still has the power to charm him. "Okay," Winston says, "not too much. Just enough."

Winston knows it's important to keep Pansy physically and mentally active. So in the afternoons, they walk and listen to music. Sometimes they attend support groups. Then it's time for dinner and another opportunity to bond over a meal.

This time it's with the family. Five nights a week the Greenes have dinner at the home of their daughter and son-in-law, Antoinette and Shane Ferris. Antoinette explains that her husband is the cook in the family.

"He's actually a chef," she says. "Went to culinary school and all that good stuff."

Winston says dinners here are the reason that he and Pansy moved close by. "Shane said, 'you come out, you'll never have to cook another meal." Shane deadpans, "I still don't' remember saying that."

There's a full house. Shane and Antoinette's 13-year-old son, Aiden, and 26-year-old daughter, Alexia are at the table. The two dogs and three cats just wish they were.

Pansy doesn't join in the conversation much. So Winston checks in with her from time to time. "Nothing's bothering you today? " he asks. "No," she says, "nothing's bothering me today. " But she adds, "Sometimes it's difficult because I'm not sure what I'm doing." Then she trails off in a few unintelligible syllables.

"Getting the words out and speaking in legible sentences is one thing that's just come up in the last few months," she says. It's happening "so much more than before."

Maybe that's another one of what Winston calls "the little things." He keeps his focus on what really matters to him.

"Even though [we're] going through this, Pansy and I are still here. We're together. We are a couple."

And that's what makes life normal for the Greenes, even though with Alzheimer's, it's a new kind of normal every day.