Accessibility links
An Artist's Alternative Universe And His Warehouse Full Of Dolls Trenton Doyle Hancock wasn't allowed to have certain toys as a child. Now he collects them. His new exhibition uses dolls of different skin colors to reflect on race in America. 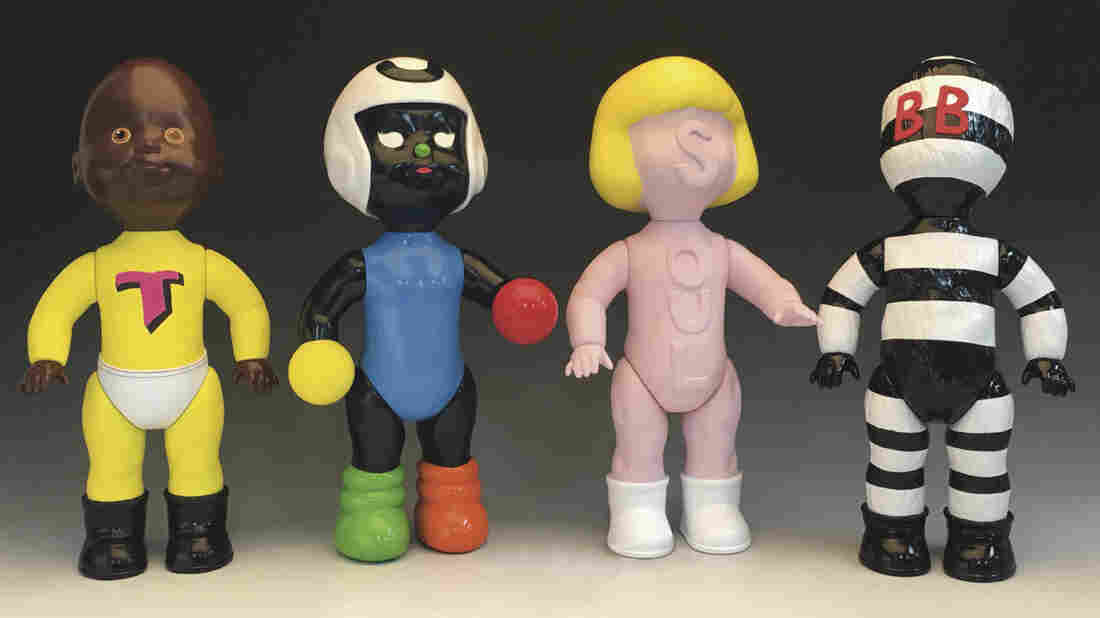 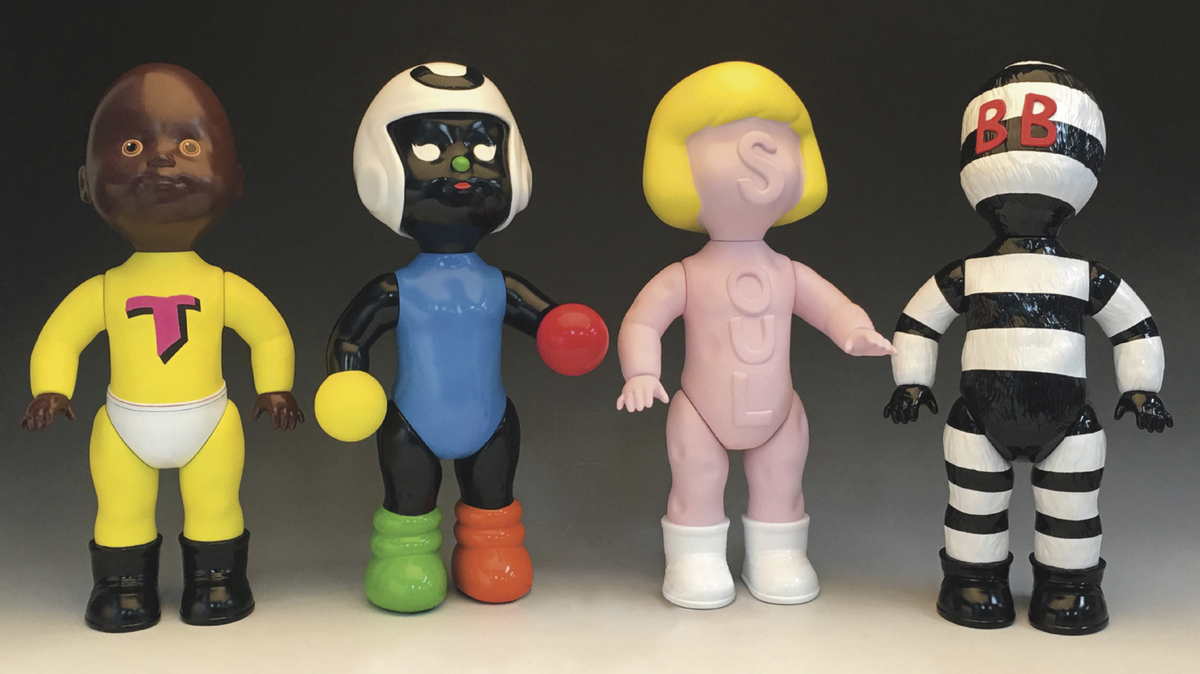 The new exhibition Moundverse Infants at Temple Contemporary in Philadelphia centers around artist Trenton Doyle Hancock's toy dolls. Torpedo Man, the superhero of his artistic cosmology, is portrayed on the left.

When Trenton Doyle Hancock was 10 years old, he made up a superhero: Torpedo Boy. The character has become the center of a complicated cosmos Hancock has developed obsessively for more than 30 years. There are drawings, paintings, sculptures — and now, a plush stuffed doll.

"Well, he looks like me," Hancock says. "He's a black guy. His face is basically my face."

Torpedo Boy is a recurring character throughout Hancock's work, and in a new exhibition called Moundverse Infants at Temple Contemporary, the museum at the Tyler School of Art in Philadelphia. It's a deep dive into the fantastical alternative world Hancock created.

"Mounds are these half-human and half-plant creatures," he says. "They're kind of these dopey big mound heaps that can't really move or do anything."

Hancock's moundverse is proudly bizarre and dizzyingly complex. It contains dozens of characters — including a goddess who controls color.

"And this color can be manipulated to fuel, and different things," Hancock says. "I know, it's — I live in my own head."

Trenton Doyle Hancock collects dolls, and toys, and other things that remind him of his Texas childhood. His collection is so big he has both a house and a studio the size of an airport hangar in Houston to store it. His stuff is fundamental to his work — work that has made him an art-world star celebrated by critics and collected by leading museums.

I'm obsessed with my own childhood. I've actually tried to turn that into a superpower.

Robert Blackson runs Temple Contemporary. He notes that Hancock's work is in the permanent collections of the Whitney, both Museums of Modern Art in San Francisco and New York, and the Metropolitan Museum of Art.

His work is also snapped up quickly by fanatical collectors. But unlike other A-listers, Blackson says Hancock doesn't cater to those galleries or individuals. He makes his work entirely for himself.

It's an intensely personal vision that begins with Hancock's youth. When you walk into Moundverse Infants, you're overwhelmed by bright reds, greens and yellows meant to evoke both a toy store and the tile in Hancock's grandma's bathroom.

"I'm obsessed with my own childhood," Hancock says. "I've actually tried to turn that into a superpower."

When Hancock was a child, his stepfather was a minister, and his mom — "she had an extreme flare-up of religion," he says, laughing. She wouldn't let her son play with toys she found "unwholesome." That's one way to describe the stuff Hancock liked: stuff like the Dark Knight comics and a TV show called Night Flight that showed him a completely different world.

"Weird animations, live punk shows — just very strange things that I couldn't quite put my finger on why this was healthy for me," he says.

Hancock made his way to art school — to Tyler School Of Art, in fact — where he learned that collecting toys also made him healthy. Many of the characters in Hancock's head appear in this show as dolls — shiny, plastic ones that are little bit unnerving.

As an African-American kid who did not own lots of black toys, Hancock became fascinated by what makes dolls objects of desire. He used to pore over the Sears catalog, analyzing toy packaging and production, as a way of understanding social aesthetics.

Hancock collects dolls he finds in thrift shops, often missing clothes and hair. He says it helps him reflect on the values placed on skin and bodies. He only buys toys made from 1959-1990.

"The rule is if I come across it at a thrift shop I have to buy it — from those years," he says. "That's why I have to have another warehouse to accommodate the collection at this point."

Hancock took a group of young, aspiring curators to the original warehouse last year. One was Aida Villanueva, 21.

"I've never seen so many things, like, toys and colors all at once," she says. "That's really the most mind-blowing thing for me."

Villanueva is part of the Young Curators Council at Temple Contemporary. It's a project that trains young people of color from North Philadelphia to be curators — a community engagement project responding to a Mellon Foundation study that showed fewer than 10 percent of museum curators and leaders are black or Hispanic. She's using Hancock's character, Torpedo Boy, as an inspiration for a workshop at a nearby Puerto Rican arts center.

"Families are invited — so, parents and kids — to make their own superheroes based on their own cultural backgrounds," Villanueva says.

This show is also a collaboration with a community institution just a few blocks away. The Philadelphia Doll Museum is run by Barbara Whiteman, and all of her dolls are black. 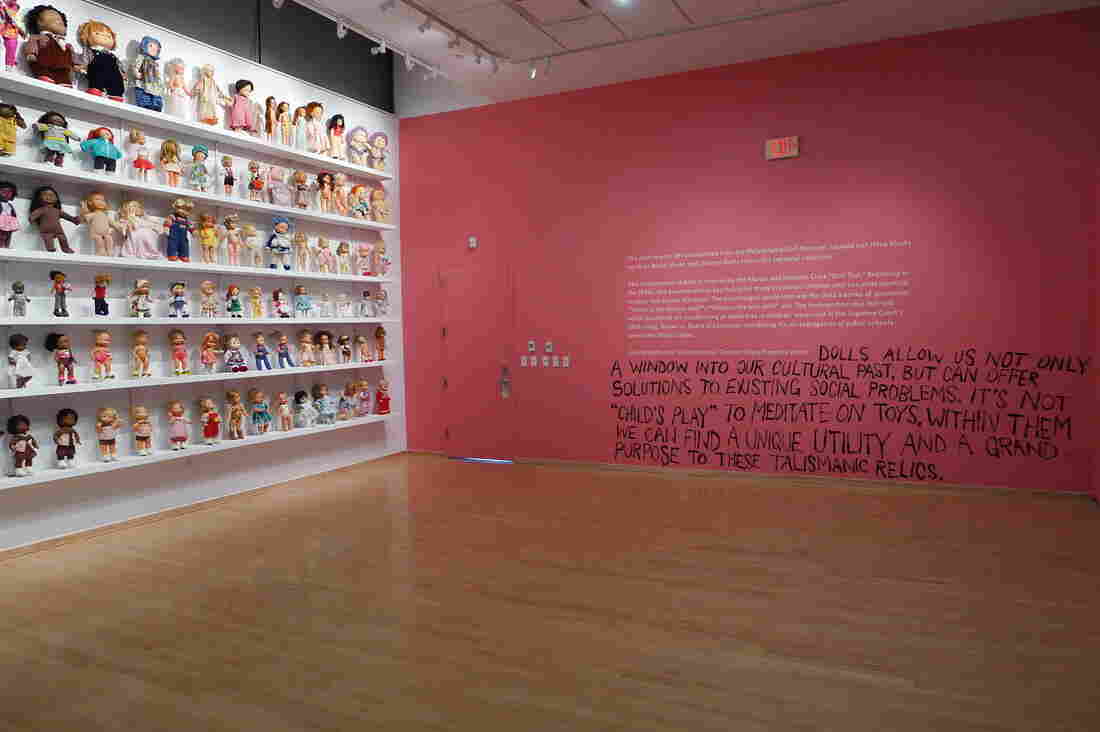 The dolls in the Moundverse Infants exhibit draw from both Trenton Doyle Hancock's personal collection, and that of the neighboring Philadelphia Doll Museum. Courtesy of Temple Contemporary hide caption

Hancock collaborated with Barbara Whiteman on an entire room inspired by the Clark doll test — where two psychologists asked children to choose between a black doll and a white doll. The results helped influence the Supreme Court case Brown v. Board of Education of Topeka. The black and white dolls packing this room reflect how toys have historically expressed a more limited range of possibilities for black kids.

"It's just like you're given a few options — it's like, well, I can be this, this or this," Hancock says. "But little white girls can be that whole row of them — like 50 options."

As whimsical as his work with toys might seem, artist Trenton Doyle Hancock says it's also rooted in reality. As he notes, "it's a very American reality."

It's a reality, he adds, that needs new mythologies reflecting American histories and mistakes — the sort of mythology a person might start to invent as a child playing with dolls.