Accessibility links
How A Mule Train From Marks, Miss., Kicked Off MLK's Poor People Campaign Martin Luther King Jr. chose Marks as a starting point for the economic justice fight because of the entrenched poverty he saw there. Today, poverty remains a challenge in Marks. 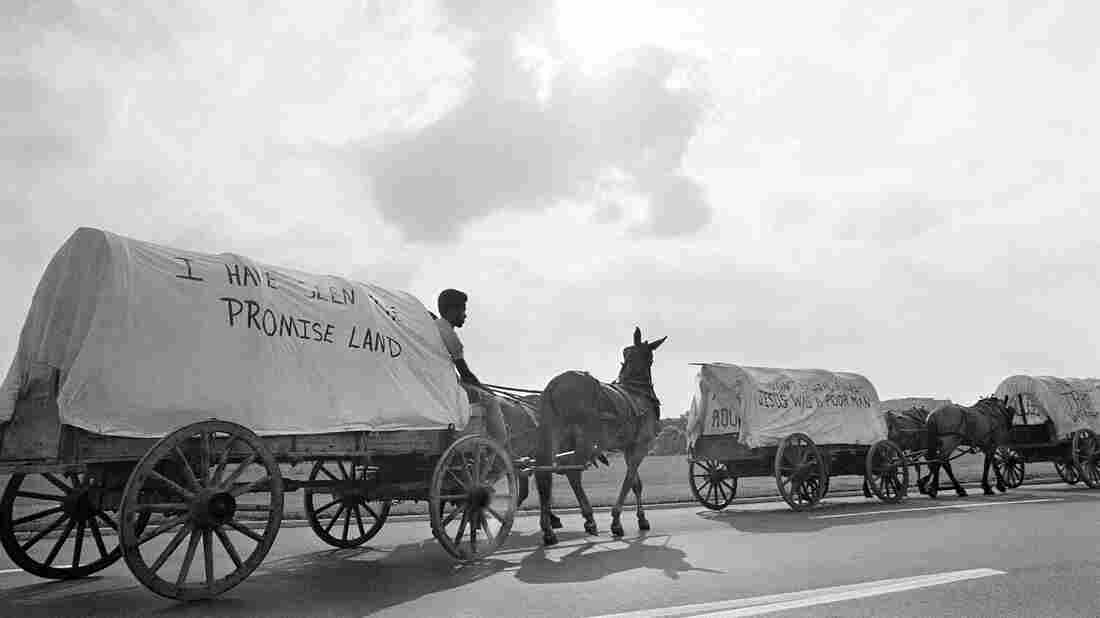 The mule train comes into the Washington area against a late afternoon sky in June of 1968. The caravan left Marks, Miss., for the nation's capital on May 13 to participate in the Poor People's Campaign. Bob Daugherty/AP hide caption 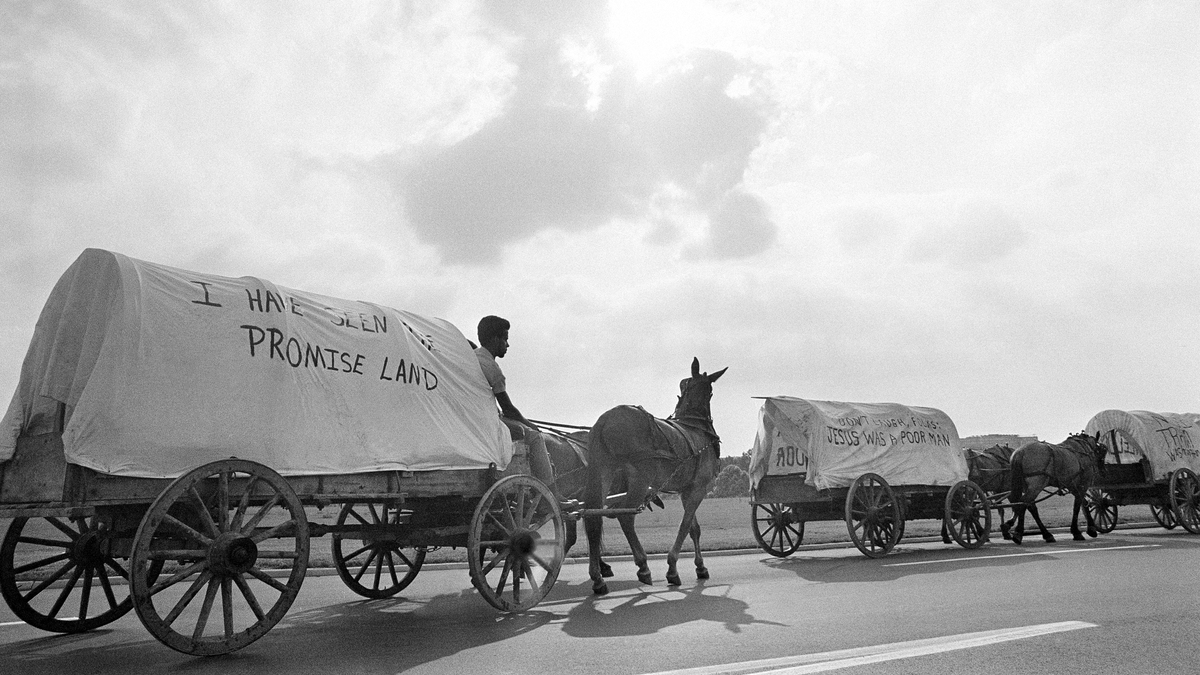 The mule train comes into the Washington area against a late afternoon sky in June of 1968. The caravan left Marks, Miss., for the nation's capital on May 13 to participate in the Poor People's Campaign.

Fifty years ago today, a mule train left the small town of Marks, Miss., bound for the nation's capital. They were answering a call to action the Rev. Martin Luther King Jr. made just days before he was assassinated.

"We're coming to Washington in a poor people's campaign," King announced at the National Cathedral in Washington, D.C., on March 31, 1968. "I was in Marks, Miss., the other day, which is in Quitman County, the poorest county in the United States. And I tell you I saw hundreds of black boys and black girls walking the streets with no shoes to wear."

The civil rights leader described being brought to tears by the conditions he found in the Mississippi Delta — a flat expanse in the northwest part of the state with rich alluvial soil along the Mississippi River. That's why he picked Marks as the starting point for the Poor People's Campaign — a multiracial coalition of poor people who would occupy the national mall and demand economic justice.

"Bring the poor to Washington"

"You go up in the field and you would just see the hungry children and the bloated bellies," she says. 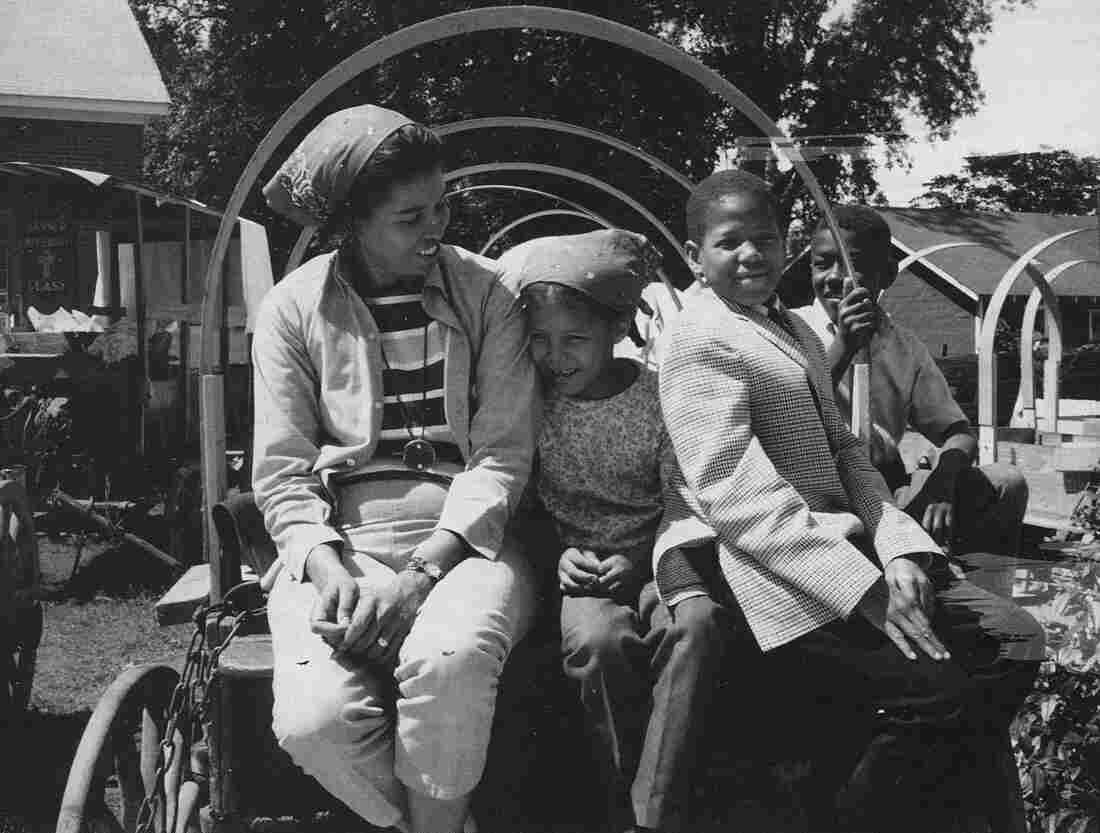 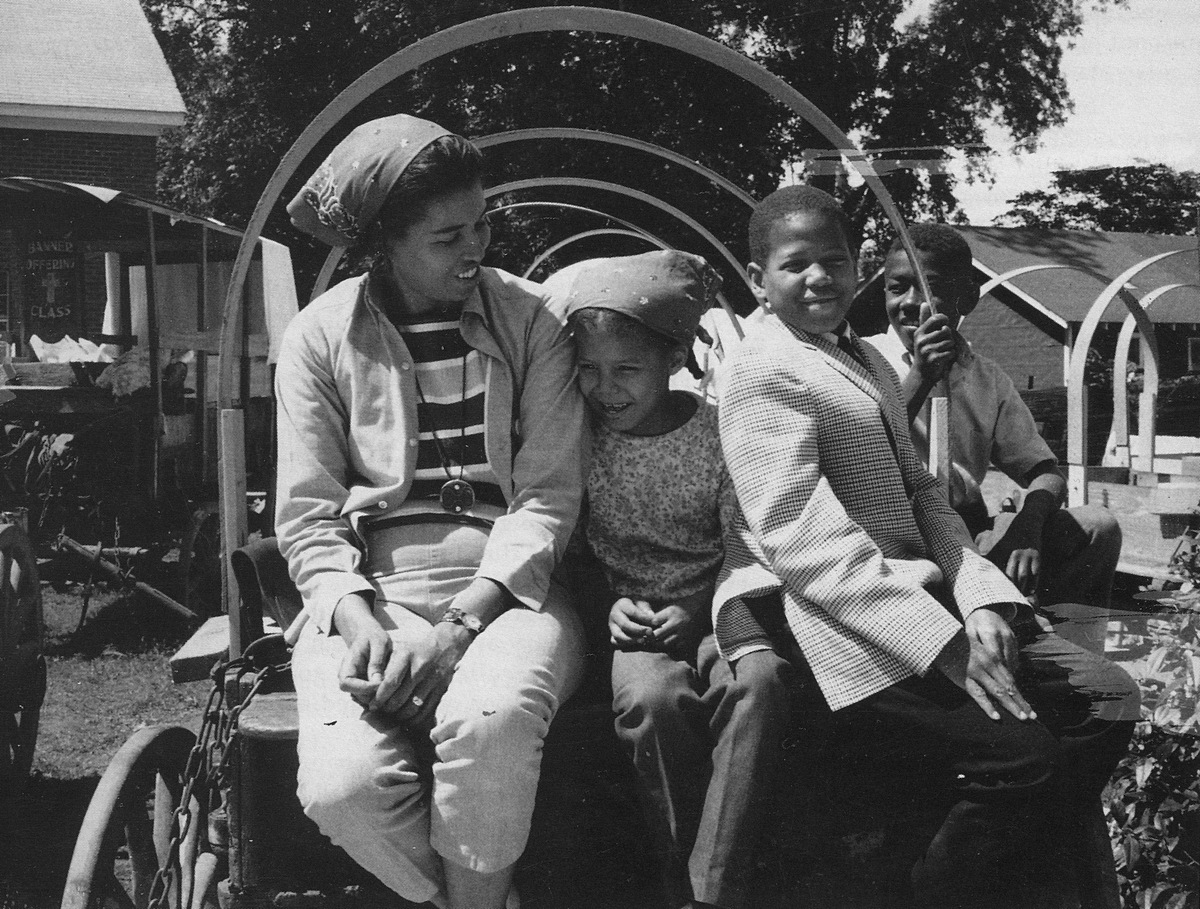 "He saw a teacher, you know, carve up an apple and give it to about eight kids — a slice each — and he was in tears," she says. "He had to leave the center."

Edelman brought members of Congress, including Sen. Robert Kennedy, to see the deprivation firsthand, but got little traction on poverty programs. She says Kennedy encouraged her to get King to put more focus on the issue. She says he loved the idea.

"I told him that I'd just seen Robert Kennedy and he had seen the hunger of children in Marks," Edelman says. "Kennedy said bring the poor to Washington and he lit up like a lightbulb."

From there King moved forward on organizing the Poor People's Campaign.

"The vision was that this mule train would go all the way from Marks Miss., the poorest hamlet in the poorest state of the country, all the way to Washington," says Georgetown University law professor Sheryll Cashin. "The mule and the covered wagons as a symbolic message of the black sharecropper."

Cashin keeps a steel mule bit and leather harness as a memento from the mule train. She went to Mississippi as a child with her parents, civil right activists Joan and John Cashin, who helped organize the Poor People's Campaign.

"Financing, locating the mules for the Mule Train, and actually going down to Marks, Miss., helping to assemble the trains," she says.

"We were tired of living the way we were living"

After King was assassinated, preparations for the journey continued.

"I'm going to take you to where the mule train was organized," says the Rev. Michael Jossel as he drives through Marks, pointing out a grassy field on the edge of town.

Jossel was 14 years old in 1968. High school students would help in the afternoons and then march into town every evening. 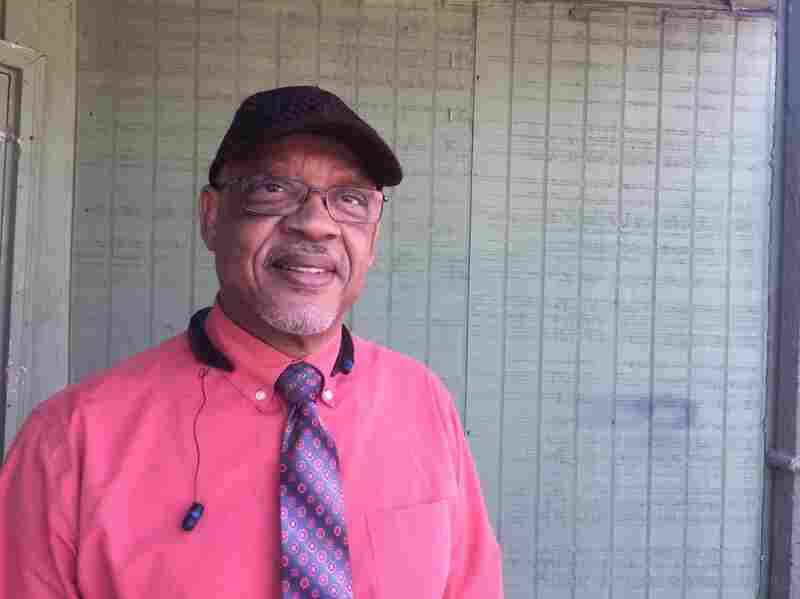 The Rev. Michael Jossel remembers excitement about the mule train when he was a teenager. He says people were caught up in the belief that change was going to come, and willing to get fired for supporting the campaign. Debbie Elliott/NPR hide caption 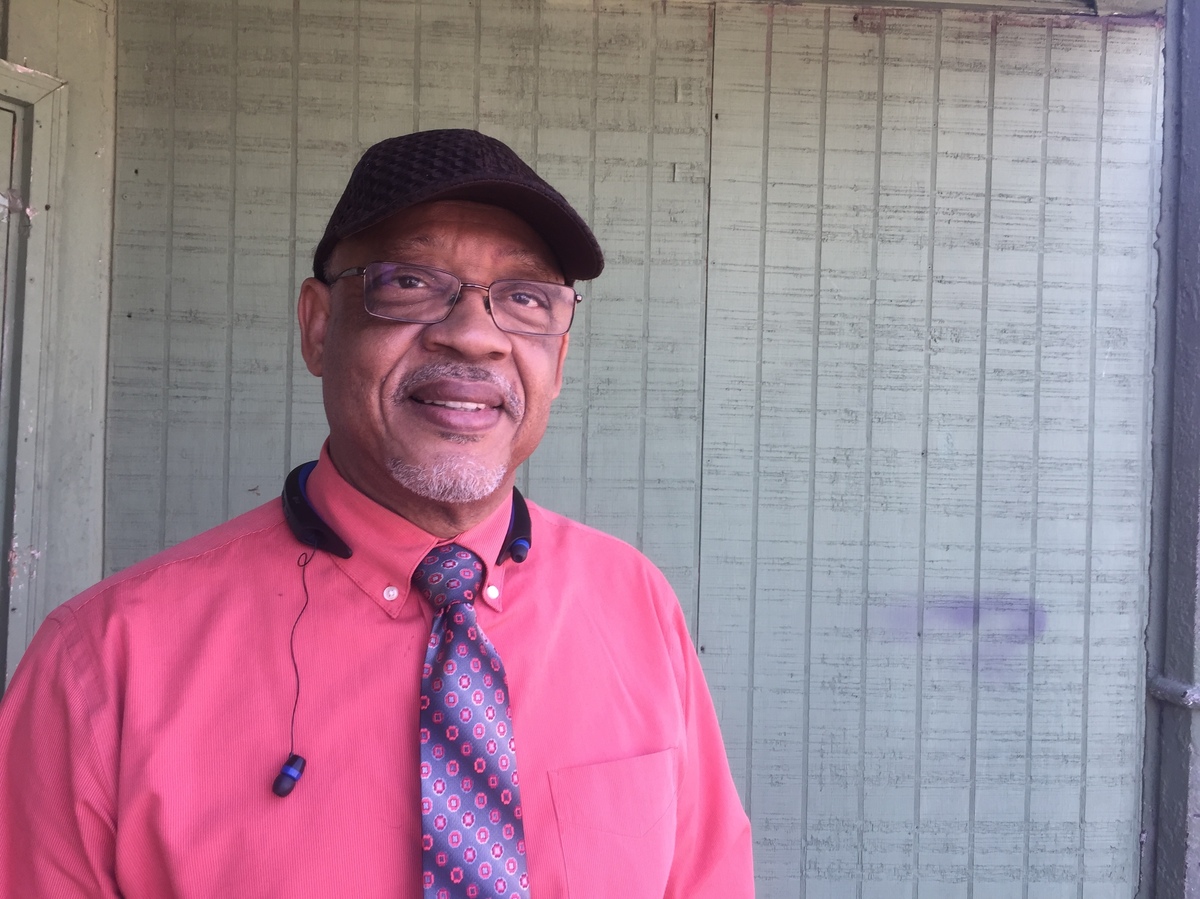 The Rev. Michael Jossel remembers excitement about the mule train when he was a teenager. He says people were caught up in the belief that change was going to come, and willing to get fired for supporting the campaign.

Jossel says the campaign gave people a sense of hope that change might come. But it came at a price. When students marched to the jail to protest the arrest of an organizer with the Southern Christian Leadership Conference, they were met by armed troopers.

"They parked on this side of the street with their helmets and guns, and lined up in a single file, and started marching across the street to where we were," he says. "They took the butts of their guns and started swinging at heads and everything, and we scattered like bees."

"You went, you went at your own risk," says Samuel McCray, who was also in high school at the time.

McCray says teens were more willing to participate than older residents, who stood to lose their jobs and homes. 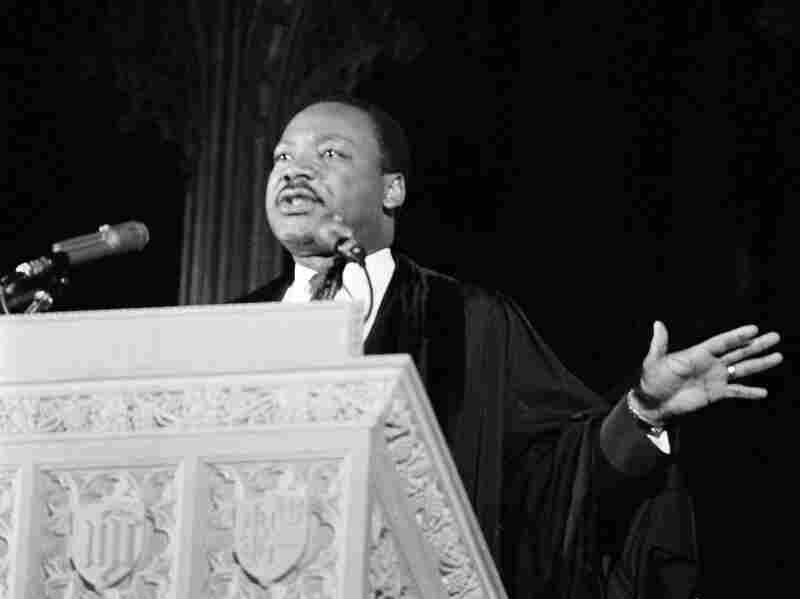 The Rev. Martin Luther King Jr., addressing the audience from the pulpit of the National Cathedral in Washington, D.C., on March 31, 1968, where he discussed his planned poor people's demonstration. John Rous/AP hide caption

"The plantation system ran the state of Mississippi. It certainly ran the Delta," he says. "It was an oppressive system."

McCray had been working the cotton fields since he was six. His grandmother allowed him to help locally, but not ride the mule train to Washington. He says there was great fear at the time.

"A lot of the parents didn't know there was a better way," he says. "You saw Dr. King and he's fighting for us, but then they killed him. So if they can kill him then what about you?"

Still enough people joined from around the South to send several busloads, and then on May 13, a caravan of about 15 covered wagons, painted with slogans such as "Jesus was a Poor Man" and "Feed the Poor" pulled out of town. 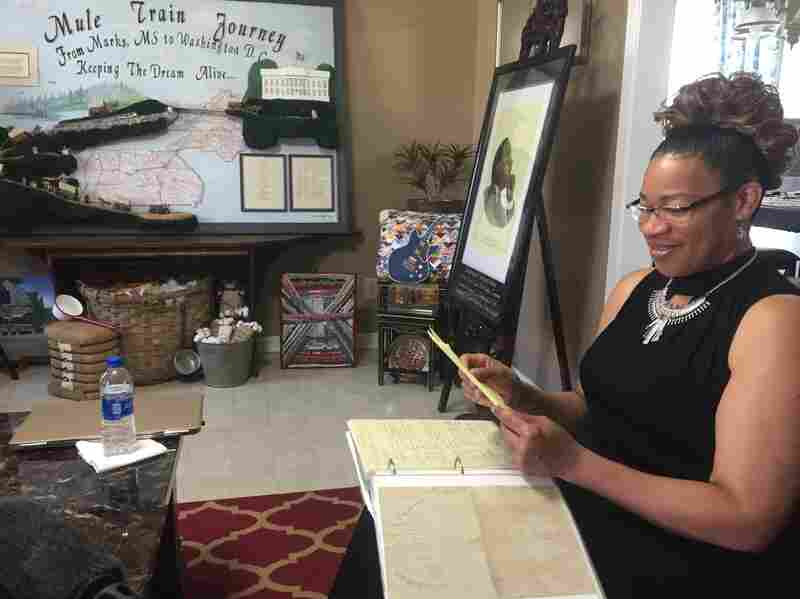 Bertha Burres and her six kids were among them. She talked to SCLC photographer Roland Freeman along the journey.

"We have a great purpose," she said on tape recordings Freeman shared with NPR.

"We are in great need of jobs – a job that will secure us to help us bring up our family with the right kind of food and clothes for the different seasons."

Burres served as the record keeper for the SCLC. She suffers from dementia now, but her cousin Betty Crawford is organizing those papers for preservation. The journals detail every stop, and describe rain storms, wagon repairs, and run-ins with law enforcement along the way.

"Seventh stop, Eupora. Our first encounter of trouble," Crawford reads from Burres' handwritten entry. "We were stopped east of Eupora by sheriff deputies."

Crawford recently moved back to Marks, and her home is filled with her original art depicting the mule train's journey. She cherishes the history.

Betty Crawford's home in Marks today is very different from her days growing up, waiting her turn for a pair of shoes, battling worm outbreaks, and living in sparse housing.

"I was 16 years old before we got inside plumbing," she says. "Before we had a house with running water."

But she says they never went hungry thanks to government commodities, her dad's hunting and fishing, and what she calls a truck patch – a large garden plot on the plantation where the family raised vegetables.

Crawford and others who lived in Marks 50 years ago say they really didn't know how poor they were, but they knew who was in control.

The mule train brought a new sensibility — that it was possible to rise above those circumstances.

As Jim Crow was dismantled, barriers to voting came down. Now African-Americans have significant political clout in the Delta. But economic power has proven more elusive. 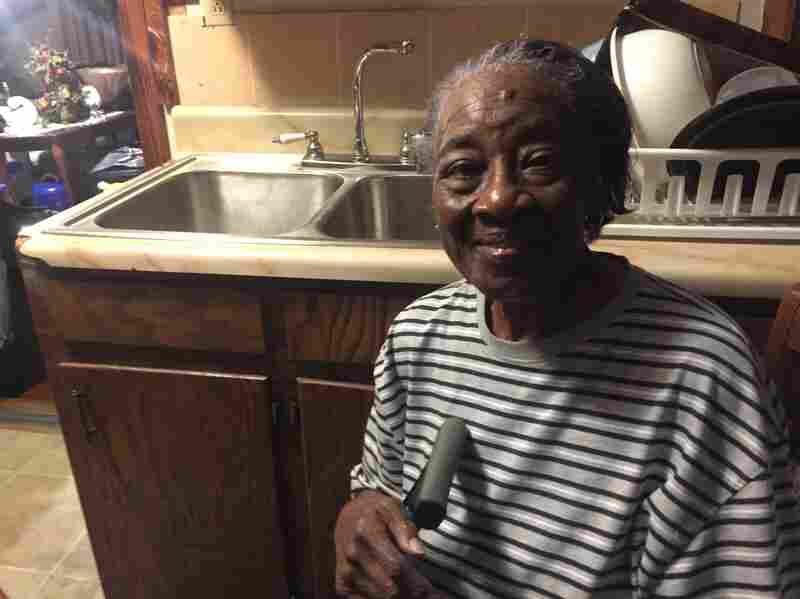 "It gets a bad rap," Samuel McCray says. "It is economically deprived. It's a misnomer to call it poor. We have a lot of people who are in poverty and there are real concrete reasons for that."

Quitman County remains on the federal list of the nation's persistent poverty counties. More than 34 percent of residents live below the federal poverty line.

Betty Crawford checks on an elderly widow in her neighborhood.

"Coming in," she hollers as she walks through the wrought iron storm door on Julia Mayweather's modest wood clapboard house. The white paint is fading outside and there are holes above the window frames.

Inside, Mayweather warns Crawford to watch her step and avoid the spots where the floorboards have rotted out. You can see through to the ground below.

"I usually kind of get over here," she says. "Step over to this side."

A retired school cafeteria worker and bus driver, Mayweather hasn't been able to keep up with repairs since her husband died. She didn't join the mule train, but participated in the mass meetings in the Spring of 1968 to plan the Poor People's Campaign. 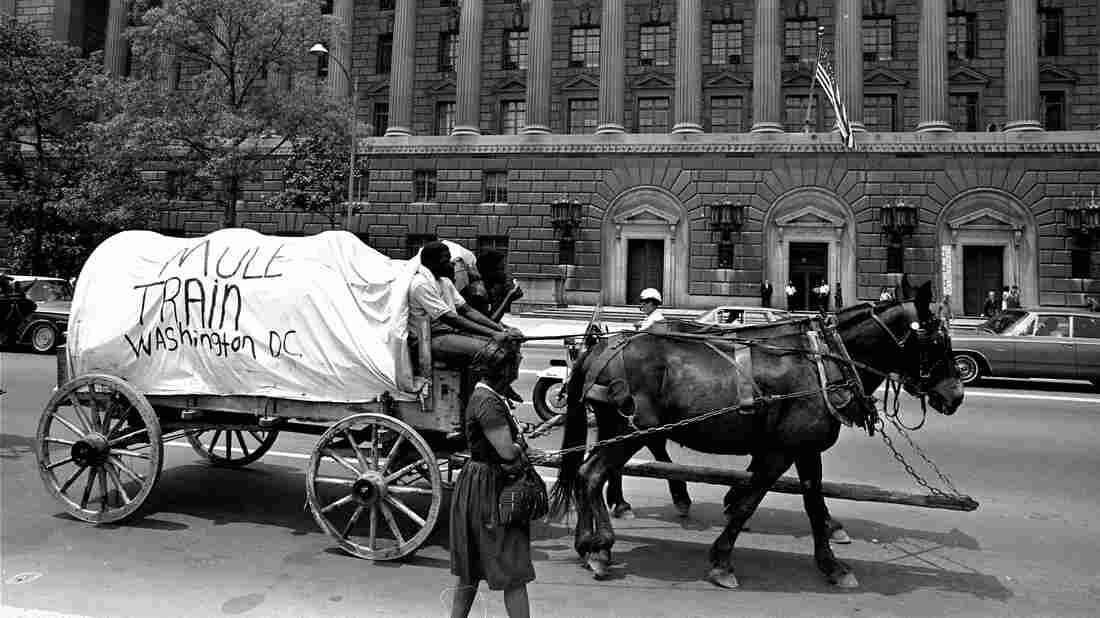 The mule train of the Poor People's Campaign crosses Pennsylvania Avenue as it makes its way up 14th Street in downtown Washington, D.C., on June 25, 1968, en route to the headquarters of the Southern Christian Leadership Conference. AP hide caption

She thinks Martin Luther King would be disheartened to see Marks, Miss., today.

"He would say worse than what it was," Mayweather says. "We don't even have a grocery store in Marks."

And she says health care is hard to come by. "Used to have a hospital. It's gone."

The hospital and an old SuperValu sit empty on the main highway. Emergency medical care is 20 miles away. Convenience and dollar stores are the local options for groceries.

On a residential street at dusk, Irene Wilson, a thin wisp of a woman, is pushing a grocery cart full of aluminum cans she's been collecting to sell for cash.

"Trying to get me something to eat cause I am hungry," she says. "I haven't ate all day."

She's 53, and says she draws a social security disability check and gets food stamps, but still struggles to get by.

"I don't want to be here," she says. "But this is where I was born and raised so I got no other choice but to live in it."

In 1968, the mule train from Marks made it to Atlanta where the whole caravan was loaded onto a rail train bound for Alexandria, Va. 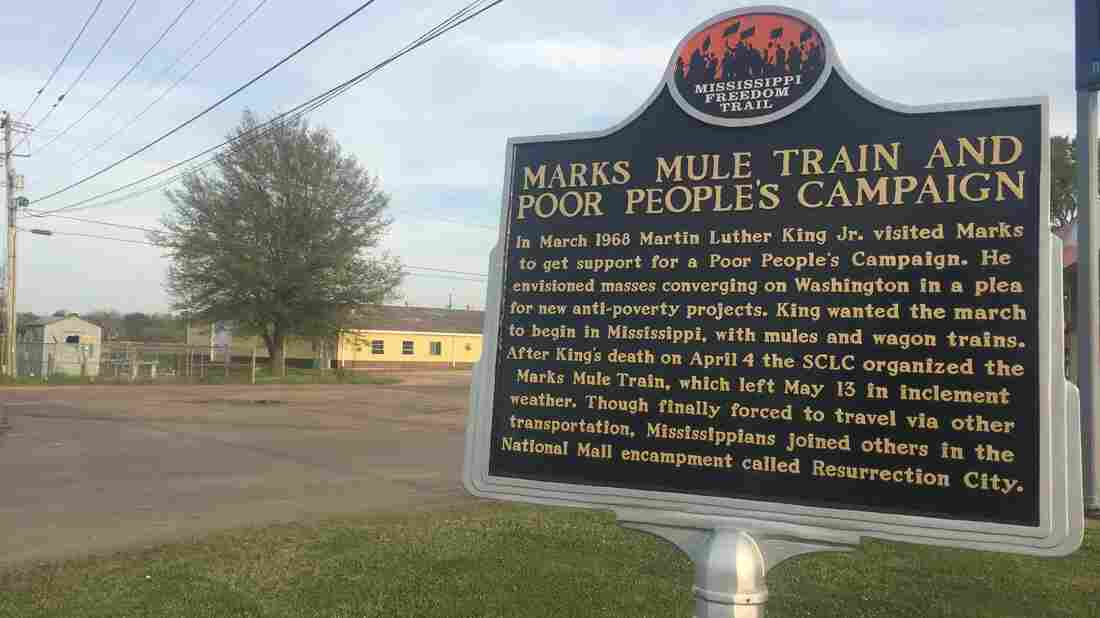 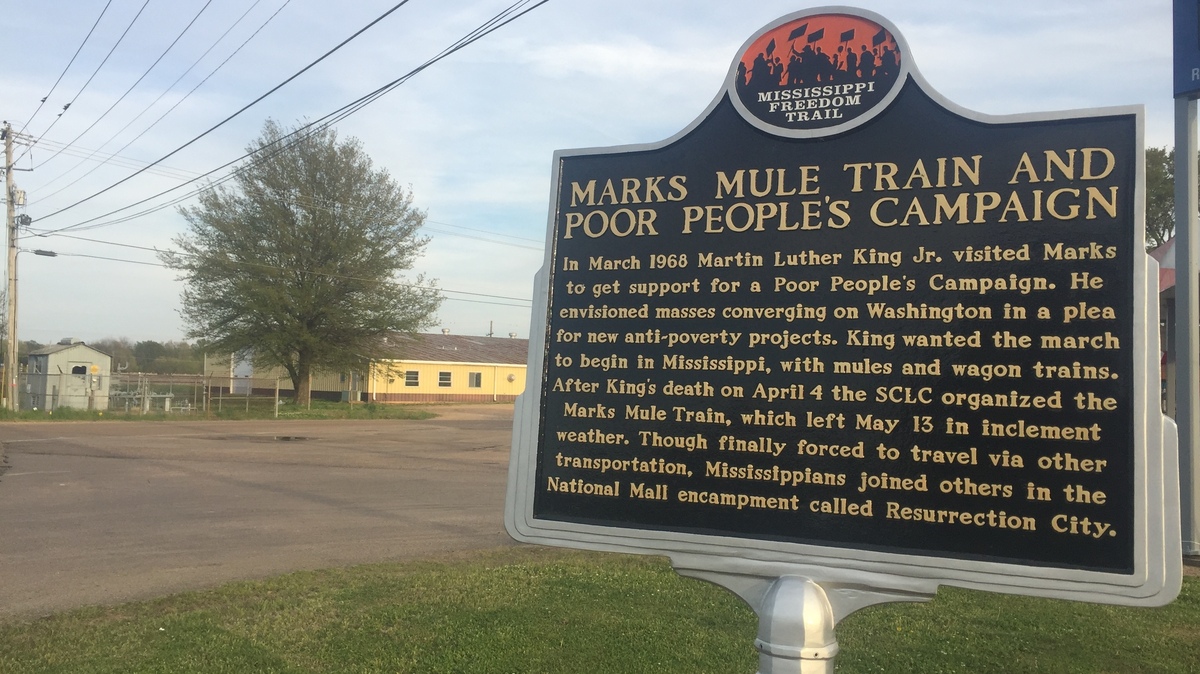 Marks is now a stop on Mississippi's Freedom Trail highlighting civil rights history. Local officials hope to draw tourists to the area as a way to spark more business.

On June 19, the wagons crossed the Potomac and joined thousands of people from around the country to live in a shantytown known as Resurrection City that occupied the national mall for six weeks.

This month Amtrak added a stop in downtown Marks. It's part of a strategy to develop the region as a tourist destination. Quitman County Administrator Velma Benson-Wilson says the history of the Poor People's Campaign and its significant role in the civil rights movement has been buried here for too long.

"How can we use it to help Quitman County maybe dig itself out of the some of the poverty?" she asks. "There has to be a way."

She says what started here 50 years ago helped people around the country when Congress passed nutrition and housing programs.

"They were all rooted in what started here in Marks in 1968," Benson-Wilson says. "Somehow we have not been able to tell that story."