Accessibility links
Brides Everywhere Are Saying Yes To The Low-Cut Dress Shop for a wedding dress these days and you'll see tons of gowns with plunging necklines and illusion fabric. From red carpet to reality TV, the trend is now spreading to a wedding chapel near you. 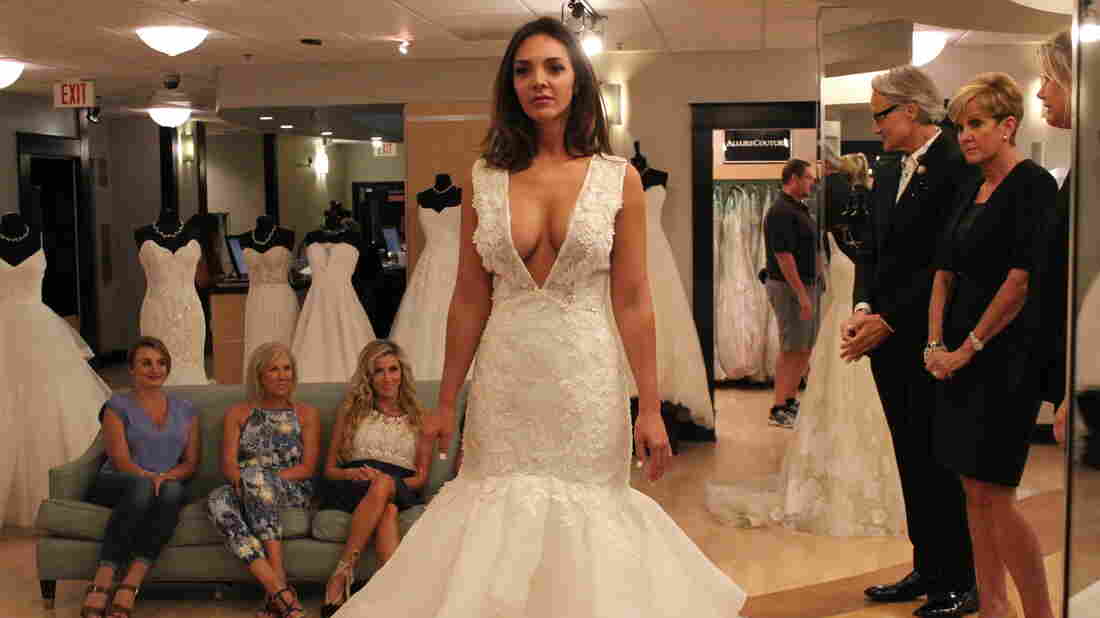 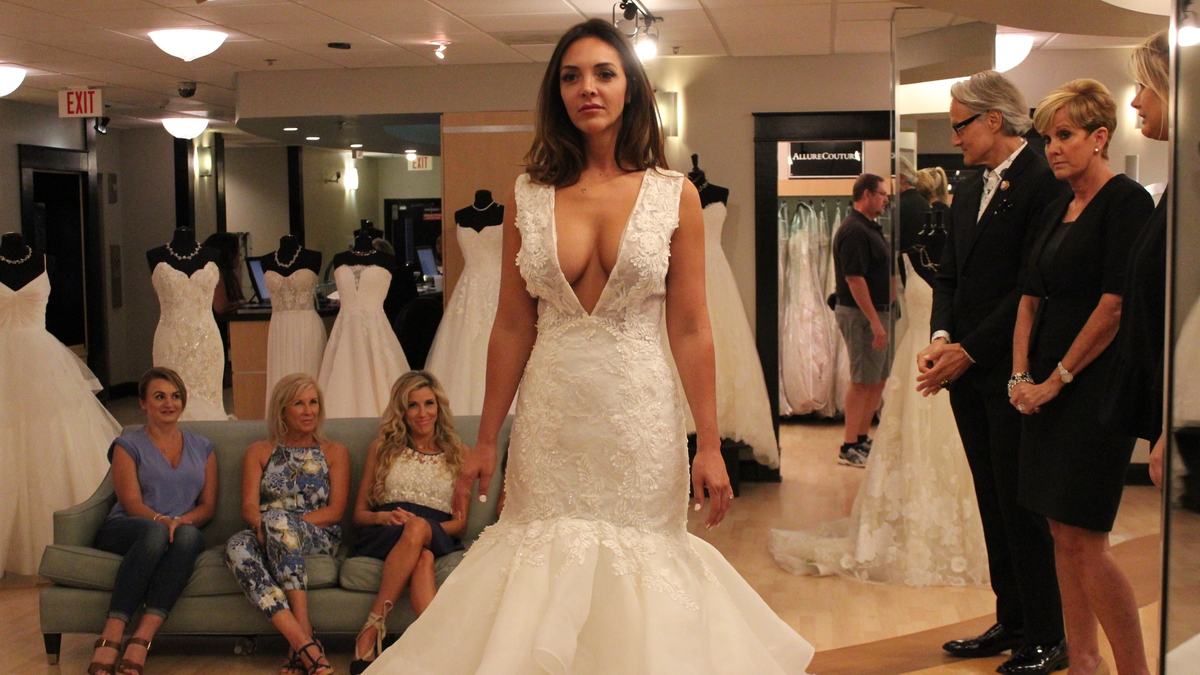 Bride Lindsey Morgan tries on a popular style on an episode of TLC's Say Yes to the Dress Atlanta. Host Monte Durham stands second from right.

Yeah, yeah, yeah. We all know springtime is a traditional wedding season. But when it comes to the dresses worn by today's blushing brides, we're seeing a much less traditional trend. In fact, other people may be blushing.

When it comes to the bridal bustline, the question these days is ... how low can you go?

"How can I say this kind of politely?" Monte Durham teases. "We have dresses cut to your navel." 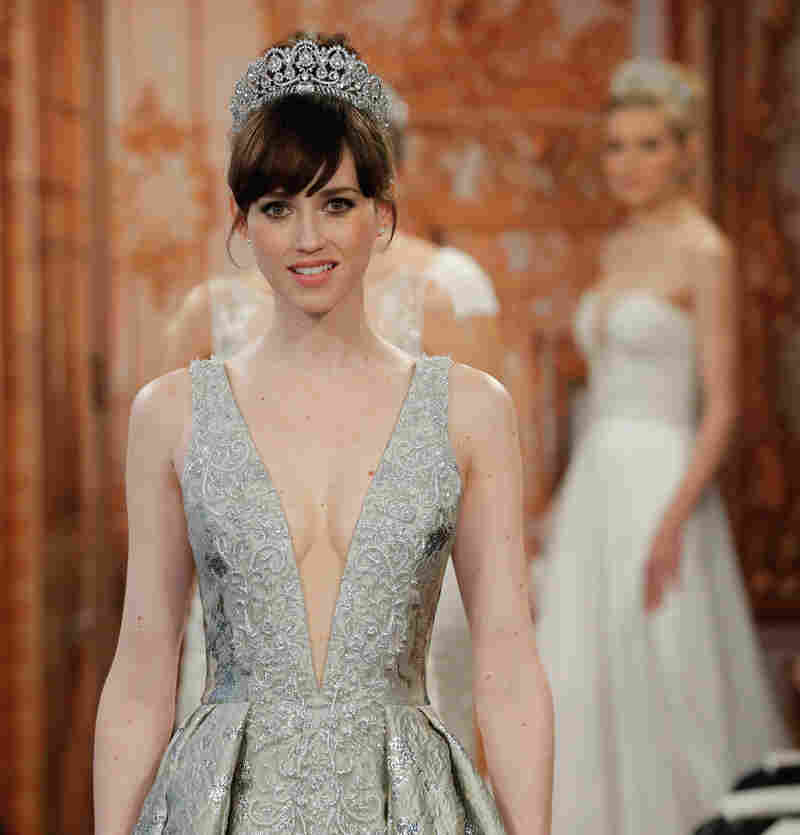 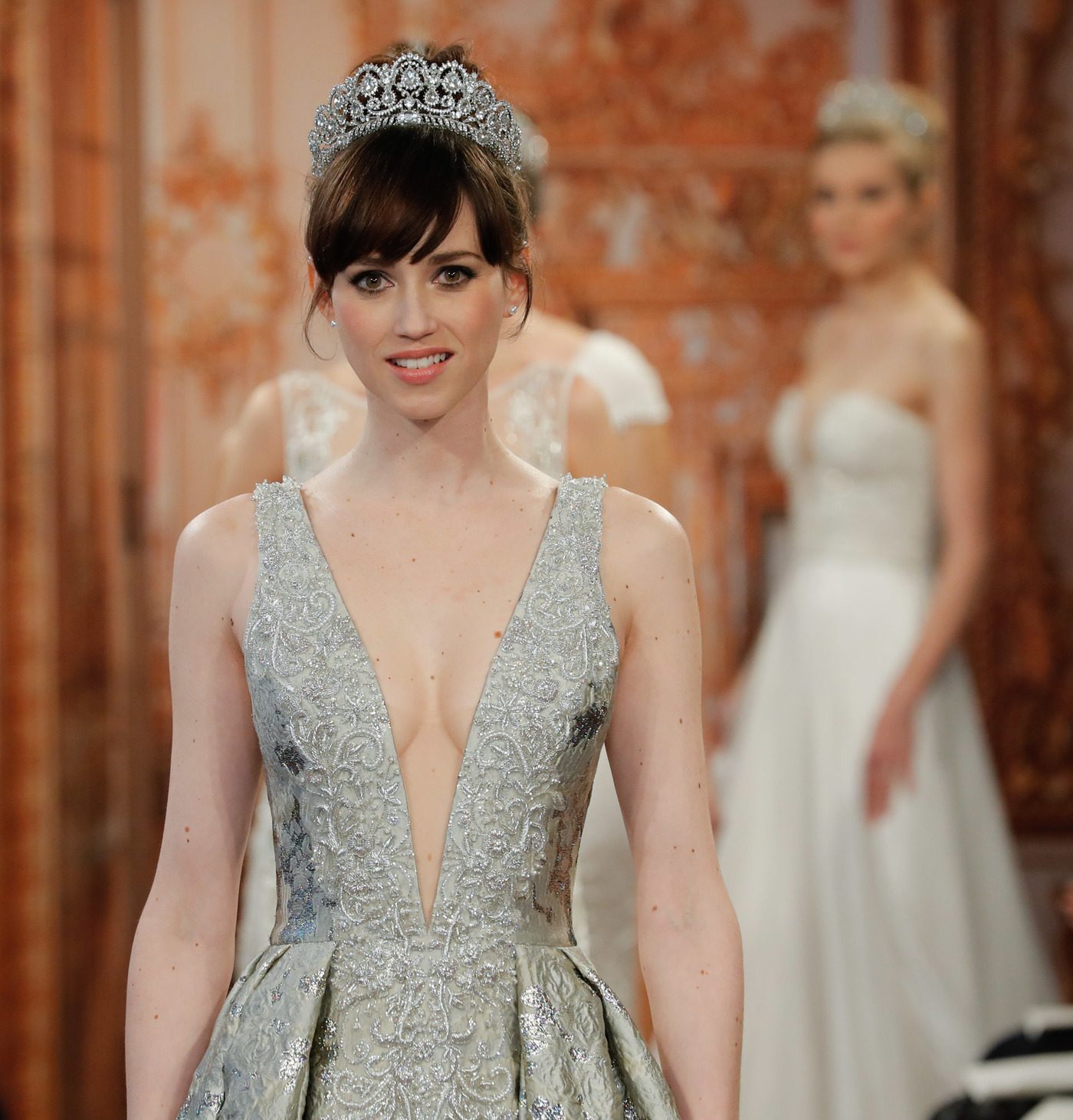 A model walks the runway in a low cut gown at this year's Bridal Fashion Week in New York.

Monte Durham works at an upscale wedding dress store in Atlanta and co-hosts the TLC show Say Yes to the Dress Atlanta. Turn it on, or the original Say Yes to the Dress, set in New York, and you'll plunge into constant drama about plunging matrimonial cleavage.

Illusion fabric does little to assuage concerns on the shows, those of mothers-in law in particular. Brides' penchant for dramatically dipping décolletage is not limited to reality television. Durham sees it among customers at his store, Bridals By Lori.

"Ninety percent of the brides want to try on a revealing gown," he says, adding that customers may not end up buying one. Still, he describes one of the top-selling dresses at Bridals by Lori as "extremely revealing." It should be noted, that this is the kind of store where dresses can cost upwards of $10,000. These dresses are not cheap.

Sociology professor Patricia Arend studies the wedding industry. She believes this trend was influenced by red carpet fashion, which itself, she says, was transformed in the year 2000 by the semi-transparent, super low-cut green Versace gown Jennifer Lopez wore to the Grammy Awards. It exposed much of the singer's chest and midriff. 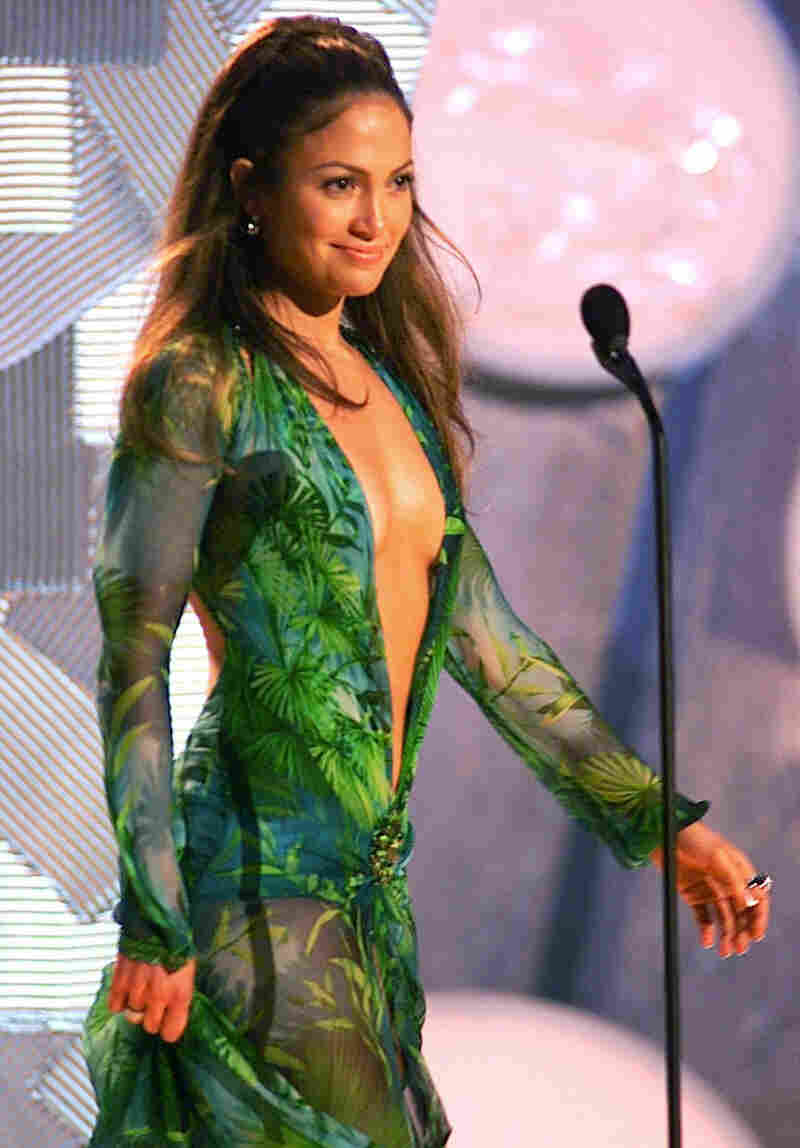 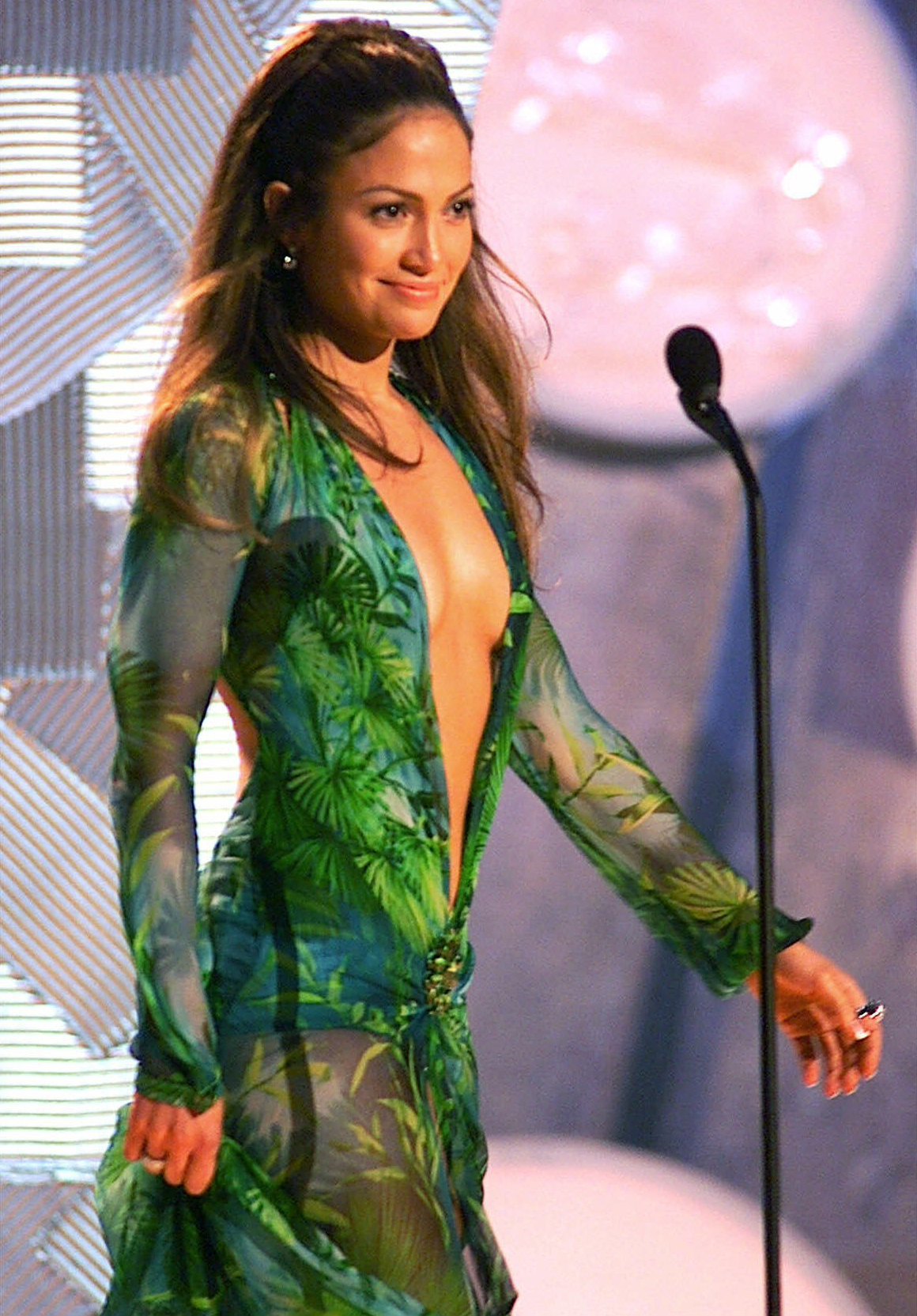 Jennifer Lopez at the 2000 Grammy Awards, in the famous green Versace gown.

"And [it] actually has been credited with the development of the Google image search, because so many people wanted to see what that dress looked like after the event," Arend explains.

These incredibly low-cut wedding dresses were influenced by more than celebrity couture. People get married these days in barns and on beaches, not just houses of worship. And marriage is no longer widely viewed as an event that transitions a person to adulthood, Arend says. On average, U.S. women getting married for the first time are 27 years old. In 1960, they were 22. And, she says, more than half of couples getting married live together first. Our next big princess bride, Meghan Markle, is 36; her upcoming marriage to Prince Harry will be her second.

"Something like upwards of 90 percent of women who marry are sexually experienced," she says. "And some of them are sexually experienced with other women. So the reference of being this innocent person who's going to lose her virginity on her wedding night, or something like that and needs to be seen as pure and chaste, that is disappearing," she says.

There's no secret — or shame — about brides being sexually confident, and that's reflected in what they wear on their wedding day, Arend says. Perhaps what we're seeing with wedding dresses with super low cleavage, she adds, are dresses that dismantle the tired old virgin/whore dichotomy. They prove that the girl that a guy wants to sleep with — and the girl he wants to marry — are exactly the same person.