Accessibility links
Filmmaker Jean Renoir Inherited An Artist's Eye For Images A new exhibition at the Barnes Foundation examines the relationship and the artistic link between 19th-century Impressionist painter Pierre-Auguste Renoir and his 20th-century filmmaker son. 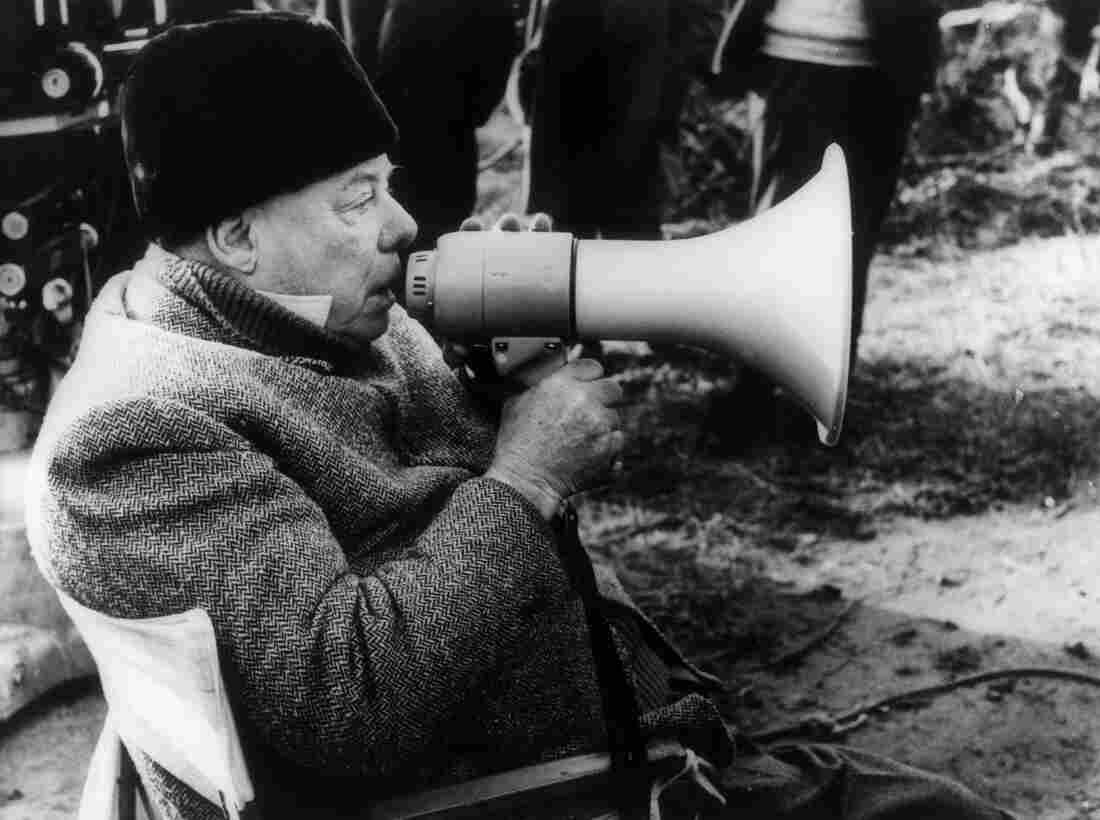 Film director Jean Renoir grappled with his father's legacy. "I have spent my life trying to determine the extent of the influence of my father upon me," he wrote. Renoir is shown above filming his 1962 film, The Elusive Corporal. Agence France Presse/Getty Images hide caption 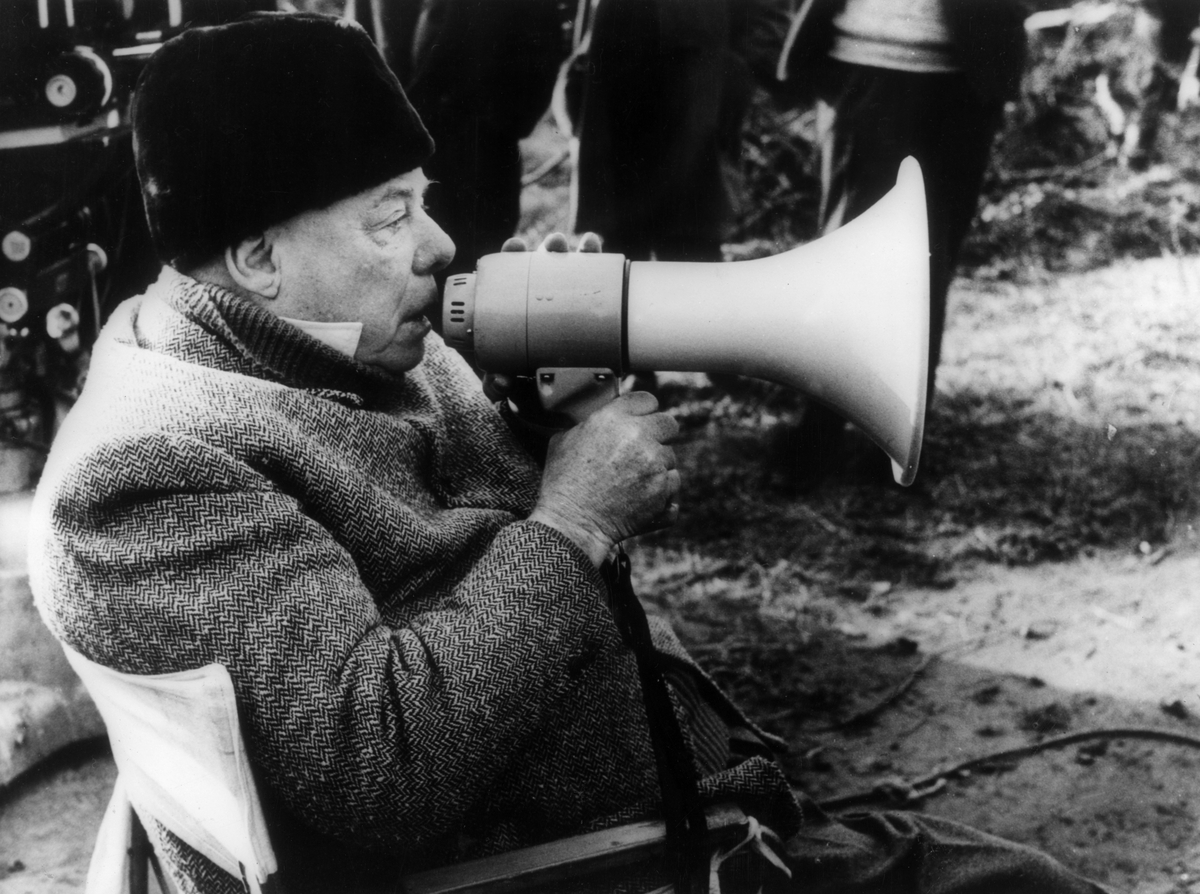 Film director Jean Renoir grappled with his father's legacy. "I have spent my life trying to determine the extent of the influence of my father upon me," he wrote. Renoir is shown above filming his 1962 film, The Elusive Corporal.

It's not often that a parent and child become masters of two different art forms, but an exhibition at the Barnes Foundation in Philadelphia proves it's possible: Renoir: Father and Son explores the work of 19th-century Impressionist painter Pierre-Auguste Renoir and his 20th-century filmmaker son, Jean Renoir.

Like many fathers and sons, they had a loving, but complicated relationship. Take, for example, the fact that in 1920, the year after his father died, Jean married his father's last model.

It's almost "too intimate" to interpret, says Matthieu Orléan, from The Cinémathèque Française in Paris. But there's no doubt Catherine Hessling was "a very important link" between the two men.

In all his paintings, Renoir's women are pink, zaftig, joyous. His son's heroines — in films such as Nana, The Little Match Girl, The Rules of the Game and Grand Illusion — are darker. His first work, a 1924 silent film, is called Catherine or A Life Without Joy.

In a memoir, Jean wrote: "I have spent my life trying to determine the extent of the influence of my father upon me." 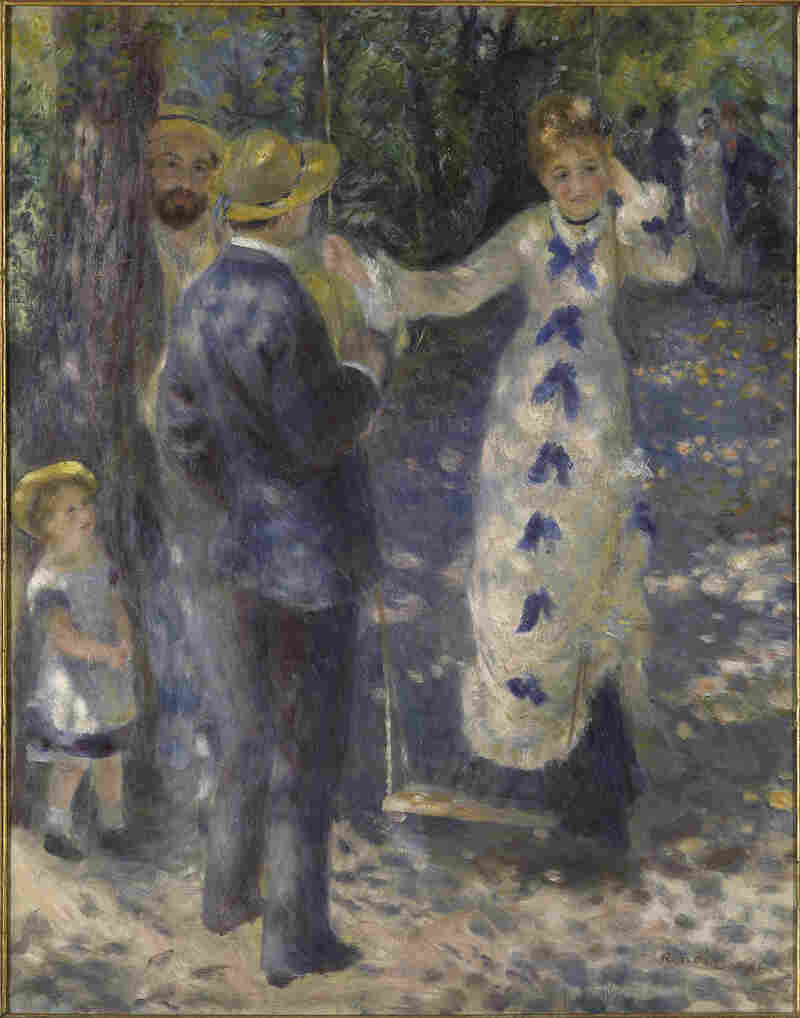 There are echoes of Pierre-Auguste Renoir's 1876 oil on canvas The Swing in his son's 1936 film A Day in the Country. Patrice Schmidt/RMN-Grand Palais (musée d'Orsay) hide caption 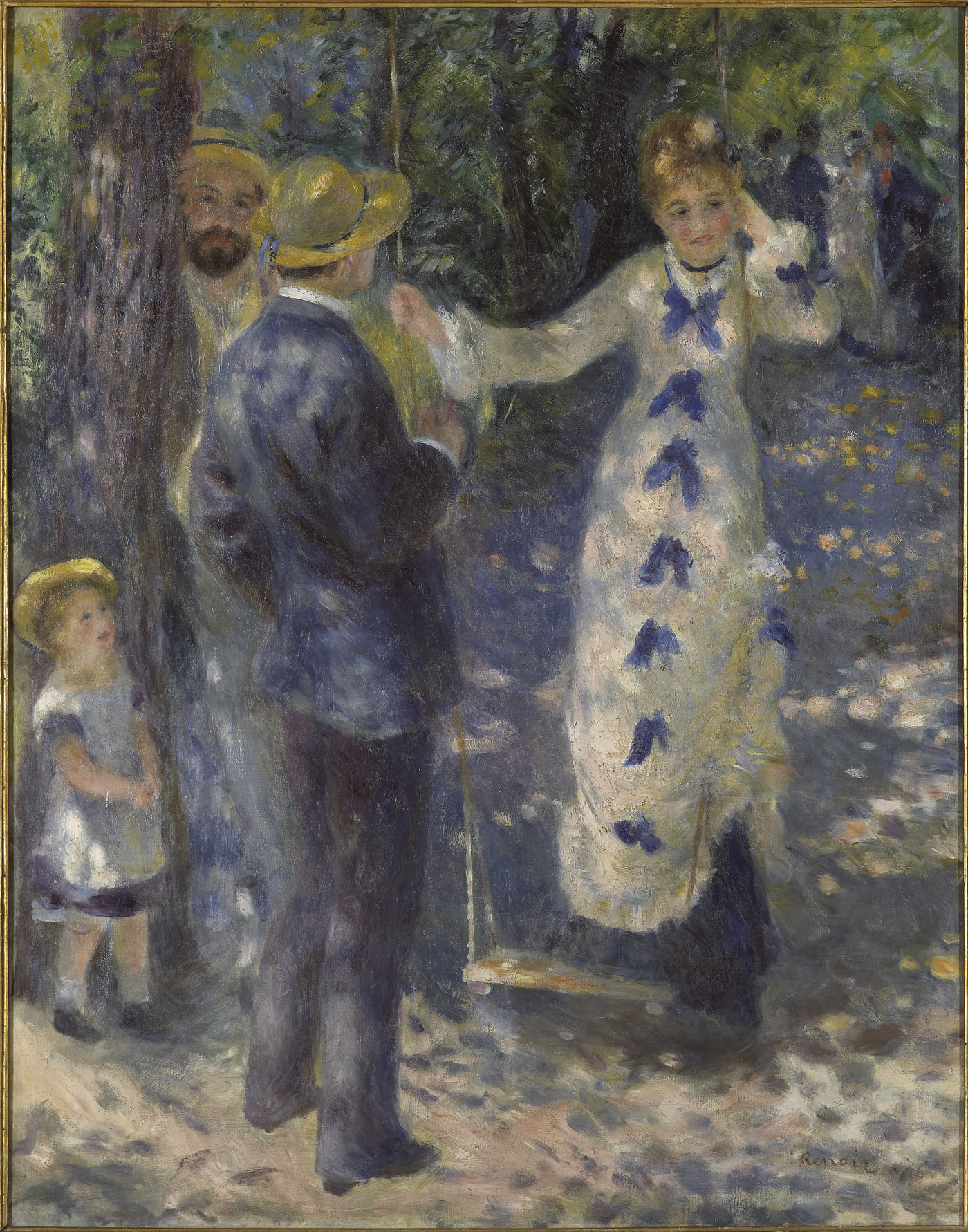 There are echoes of Pierre-Auguste Renoir's 1876 oil on canvas The Swing in his son's 1936 film A Day in the Country.

That influence can be seen on the walls at the Barnes. A clip from a film Jean made in 1936 is projected on a wall near an oil painting his father created 60 years earlier. In the painting, a pretty, sun-dappled, young blonde woman stands on a swing. She's wearing a long, white dress with a row of blue bows down the center.

The painting is "very much about light, colors and the impact of natural light on the colors and on the shapes," says Patry. She points out that Jean Renoir's film A Day in the Country has a similar summertime scene. His camera follows a young woman happily swinging in a garden. She's wearing a dress much like the one in the color-drenched painting. (You can see that scene here.)

Clearly his father's painting influenced this scene, but Jean made some changes. His film is in black and white and it's a moving picture — not one fixed in a frame. More than that, there are no bows on the slim swinger's dress – instead the director moved the bows over to the girl's portly mother. What was he thinking, transposing the dress bows? Associate curator Cindy Kang has a theory:

"[This] is such an obvious: I'm going to evoke my father's work and then turn them around and turn them on its head," she says. "I'm going to subvert your expectations. ... This is how he was dealing with his father's legacy." 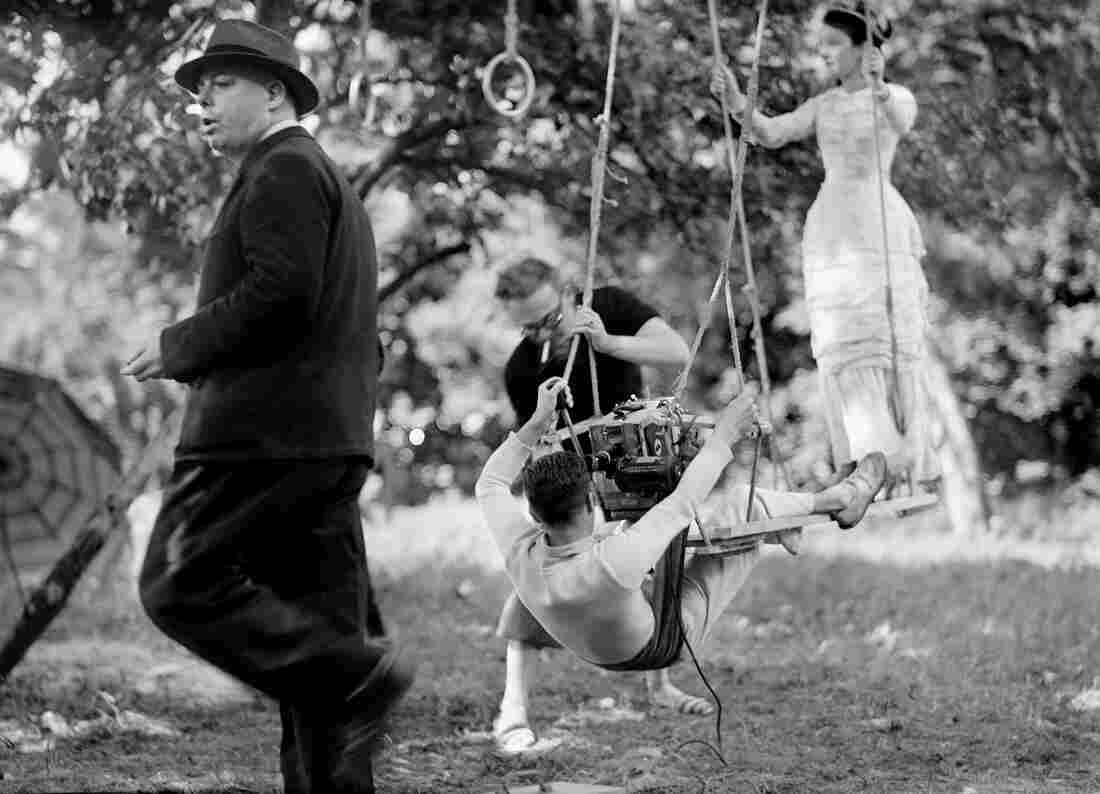 On the set of A Day in the Country. Eli Lotar/Centre Pompidou, MNAM-CCI, Paris hide caption 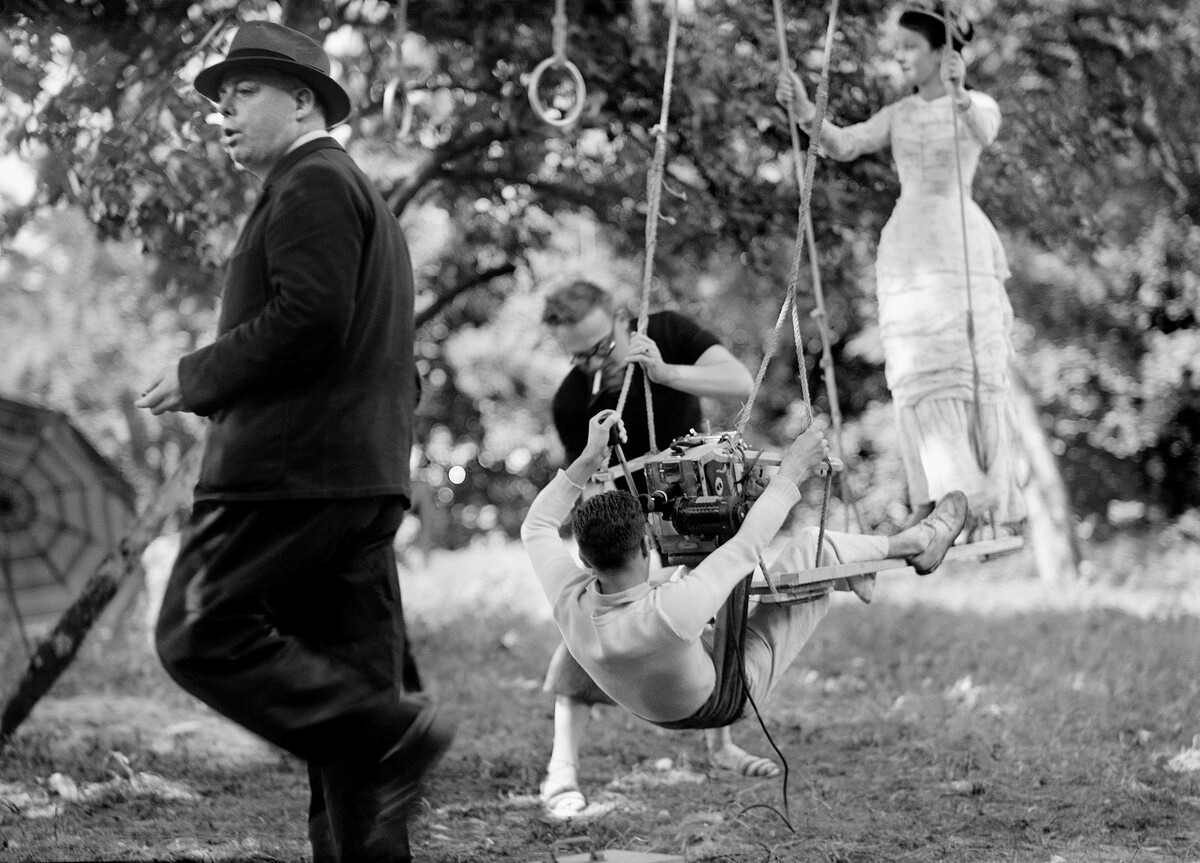 On the set of A Day in the Country.

Renoir set many of his films in his father's century — with its lovely long dresses and long, leisurely days. But he also used his moving pictures to tell more modern stories. Renoir's films often appear on lists of the greatest of all times. The legendary French directors who followed him — François Truffaut, Jean-Luc Godard — called him "Le Patron," (the boss), which is the same title that painters gave his father.

'Renoir In The 20th Century': A Master's Last Works

Film curator Matthieu Orléan heard a revealing story: In the 1950s, an actor went to Jean's Hollywood house, where the director offered to show one of his movies. A Renoir hung on one wall and when Jean pushed a button, a screen came down from the ceiling, hiding the painting. Still ... on the opposite wall, another glorious Renoir painting remained in full view.

Growing up in the shadow of genius, loving the genius, and adapting it to a modern medium. Those are the themes of Renoir: Father and Son, at Philadelphia's Barnes Foundation through early September.

Vincent Acovino and Shannon Rhoades produced and edited this story for broadcast. Beth Novey adapted it for the Web.