Accessibility links
Something From Nothing: 20 Years On, The Enduring Yada Yada Of 'Seinfeld' The series finale of Seinfeld aired 20 years ago on May 14, 1998. Since then, a new generation of fans continues to follow the antics of Jerry, George, Elaine and Kramer on cable and online. 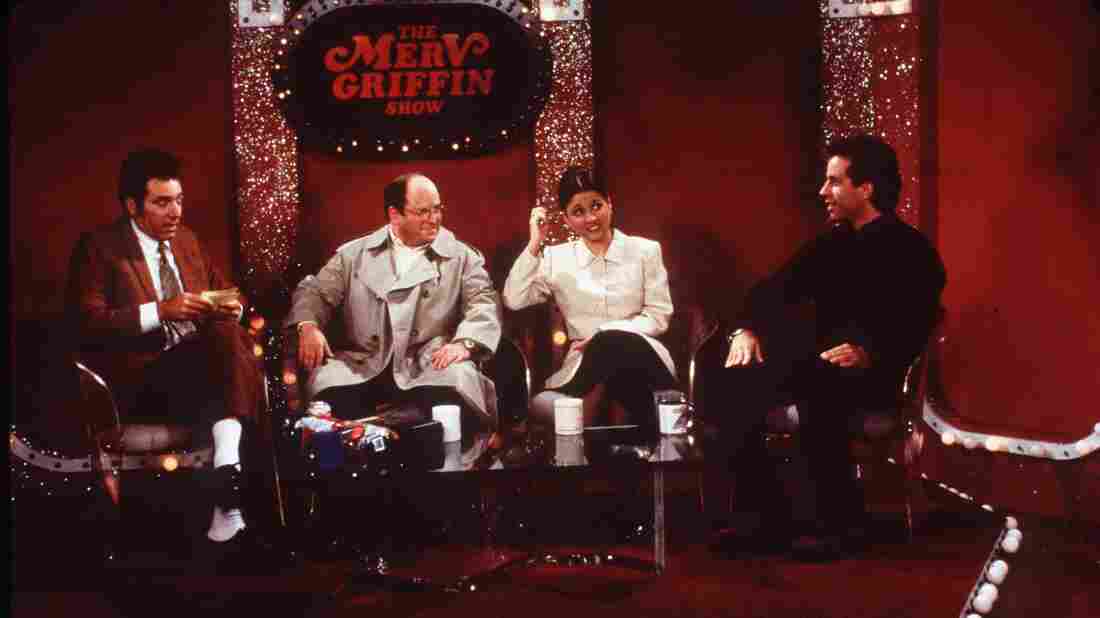 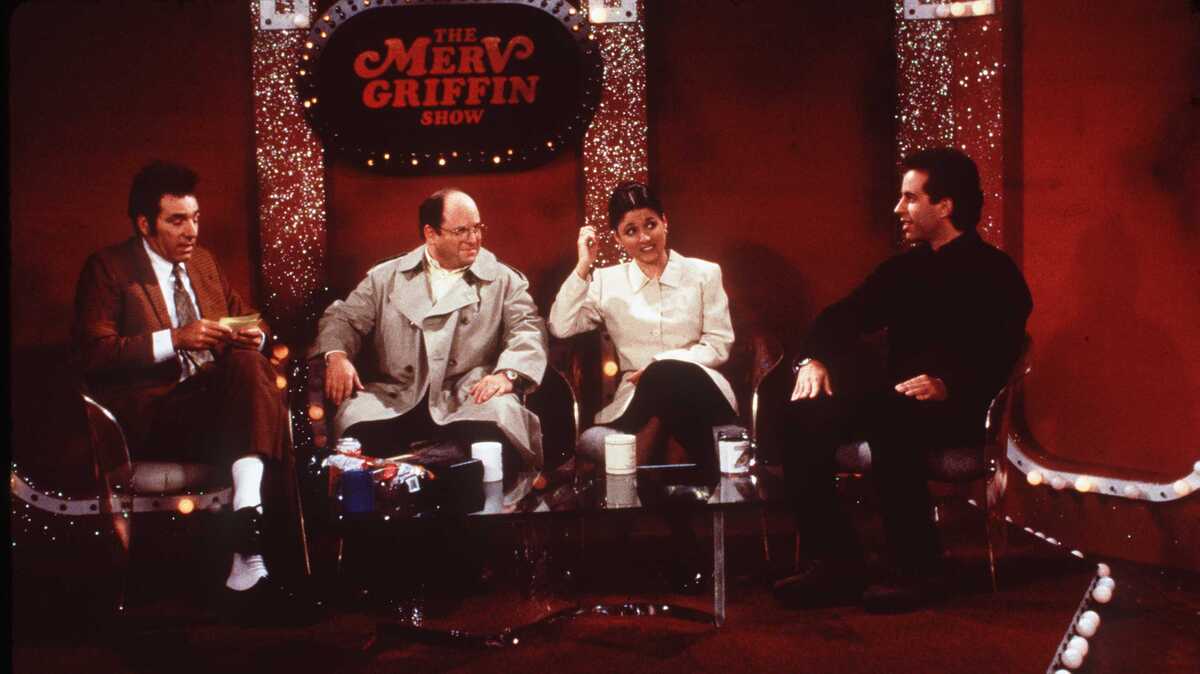 The series finale of the television comedy Seinfeld aired 20 years ago Monday. The '90s TV juggernaut followed the antics of 30-something New Yorkers Jerry, Elaine, George and Kramer.

It was the show that made something out of nothing.

Twenty years ago, NBC aired the final episode of Seinfeld, which followed the ramblings of four friends — Jerry, George, Elaine and Kramer in '90s New York. The show was wildly popular during its initial nine-season run and has remained a cultural touchstone in the decades since it went off the air.

I spent many weeknights watching reruns of Seinfeld with my dad. The show's enduring popularity after it went into syndication — and later streamed on Hulu — highlights the inter-generational appeal of the show.

Much of the humor in Seinfeld – Kramer playing a Moviefone operator, Jerry and Elaine getting stranded at a party on Long Island (no Ubers to call), Elaine's careful consideration of whether a potential hookup is worth the use of a discontinued birth-control sponge – are relics of American life, but the show's humor endures, says Carol Leifer, a writer for Seinfeld during seasons five, six and seven.

"When I was growing up I used to watch I Love Lucy and that was a show that was an old timey show back then, but it's funny," she tells Here & Now's Jeremy Hobson. "And I'm just so proud to have been part of a show that's really withstood the test of time."

Created by comedians Jerry Seinfeld and Larry David, Seinfeld aired 172 episodes from July 1989 to May 14, 1998. The show presented an obsessively close look at the frustrations and irritations of everyday life for a group of 30-somethings in Manhattan.

Often referred to as "the show about nothing," each episode saw the four friends – Seinfeld playing a version of himself, Jason Alexander as George Costanza, Michael Richards as Cosmo Kramer and Julia Louis-Dreyfus as Elaine Benes — encounter a seemingly small problem that spirals into unexplained mayhem.

Some of the best episodes centered on a simple premise that often left network executives confused as to how it would play with the audience. In one particularly iconic episode, "The Chinese Restaurant," Jerry, George and Elaine spend the entire half hour waiting for a table.

A ravenous Elaine tries to bribe a group of people for an egg roll off their plate; Jerry runs into a woman he knows but blanks on her name, and George – trying to get in touch with a woman he's seeing named Tatiana – has an outburst in the middle of the restaurant because others are hogging the pay phone.

"It's like the thesis of the whole show," Jennifer Keishin Armstrong, author of Seinfeldia: How a Show About Nothing Changed Everything, told Hobson in 2016. "This was a particularly groundbreaking episode because nothing happens. ... The plot is, you know, the log line is they go to a Chinese restaurant, they wait for a table, they don't get it, they leave. That doesn't sound like a story to network executives."

In fact, after the first preview of the pilot episode, Brandon Tartikoff, the head of NBC entertainment, asked his colleagues: "Who will want to see Jews wandering around New York acting neurotic?" Turns out, the lives of four irrational New Yorkers would be more relatable than executives suspected.

Many of the ideas for the show actually came from the writers' real-life experiences, Leifer says. She says one of the most famous scenes — when Jerry tries to wrestle a marble rye from an elderly woman on the street — actually came from her friend's unusual dinner party experience.

"She said, 'The funniest thing happened to me. My husband and I had a couple over for dinner, and they brought a bread, and I forgot to put it out. And I realized at the end of the evening that they had taken the bread home with them,' " Leifer says. "And as my friend was telling me this story, I said to her, 'Oh my God, I cannot wait to pitch that.' "

Not only did Seinfeld find humor in the mundane, but it opened the door for the TV anti-heroes that came after – the mobsters of The Sopranos, Breaking Bad's meth-cooking Walter White and the four entitled 20-somethings on Girls. The characters in Seinfeld didn't evolve, and they were funnier that way. As Larry David would say on set, there is "no hugging, no learning."

Even the show's series finale – which was watched by 76 million people and vilified by almost all of them – ends with the four friends going to prison for violating a Good Samaritan law in Massachusetts. Jerry, Elaine, George and Kramer witness an overweight man being robbed, but instead of helping him they relentlessly mock him.

In some ways, it was a fitting ending for the selfish group of Manhattanites, whose no-cares attitude was as equally cringe worthy as it was inspiring. As Elaine once said in a toast to colleagues at an office party, "Here's to those who wish us well, and those who don't can go to hell."