Accessibility links
'Deadpool 2' Makes References To Other Things. A Lot. Ryan Reynolds once again assays the role of a deadly mercenary who makes many references to various pop culture properties while disemboweling folk a lot. No fourth wall is safe. 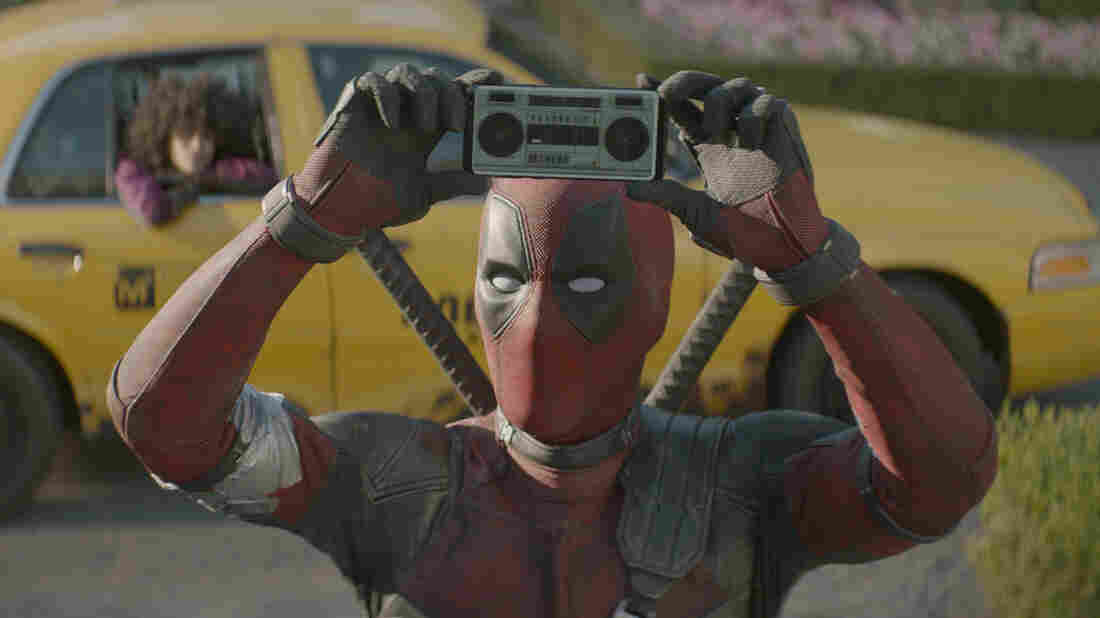 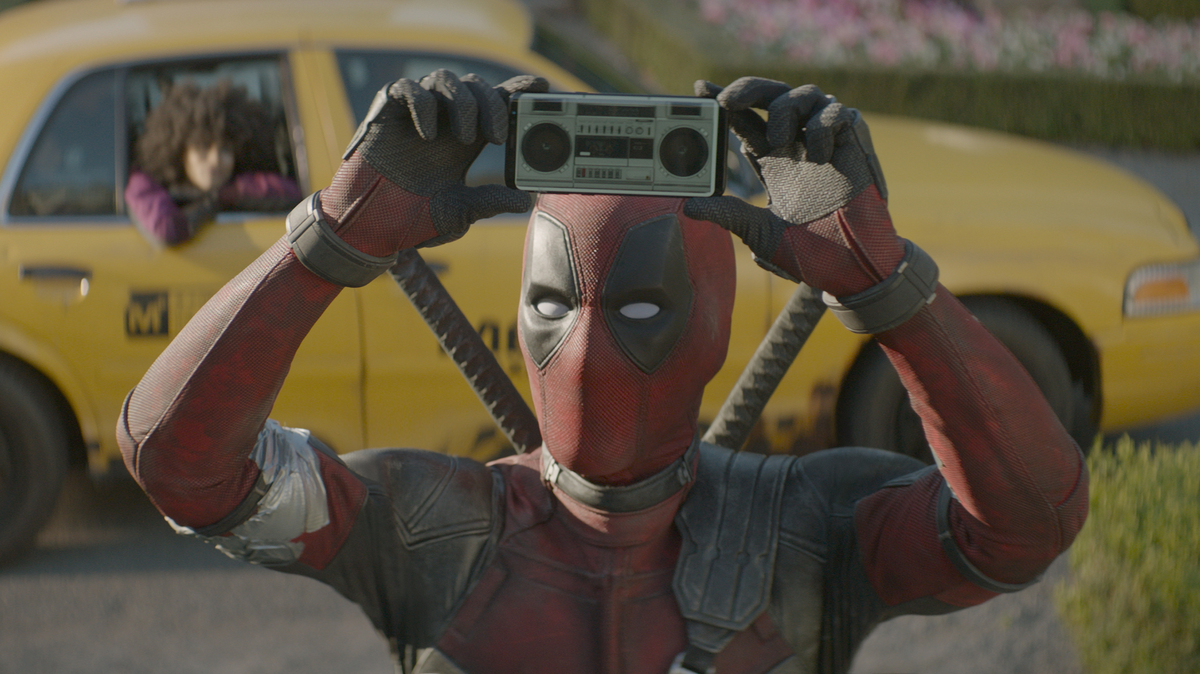 Ultraviolent super-mercenary Deadpool (Ryan Reynolds) references a film that many people will recognize — that's kind of his whole deal — in Deadpool 2.

Deadpool 2, like the 2016 film to which it is a sequel, stars Ryan Reynolds as a violent super-mercenary with the the ability to heal himself from any injury. In both films, Reynolds unleashes a logorrheic verbal torrent of meta-references to other movies — so many, so unceasingly, that their net effect is to hammer the fourth wall into a powdery dust.

"This thing you are looking at right now" he essentially says, often, "is like this other thing you have looked at in the past, when you were watching an entirely different film. Nutty, right?"

There are, it is only fair to note, actual jokes in Deadpool 2 — sincere, crafted, legitimately funny gags that are clearly the product of human thought and loving effort. There's ... not a lot of those, but they're there if you look, and should you happen across one, it will very likely delight you.

Céline Dion Is Too Good For Deadpool

Because what's taking up most of the room that would otherwise be occupied by jokes in Deadpool 2's screenplay are those many, many, many references.

It's Family Guy: The Movie.

Or, technically I suppose, it's Family Guy 2: Here Are Some More Mentions Of Other, Tangentially Related Things You Recognize And Like.

... And it's gonna make a kabillion dollars.

It's also, more to the point, not simply critic-proof but critique-proof. Try, just try, to come at this franchise with the merest quibble, the tiniest concern, the wispiest suggestion that say, having Deadpool refer to Josh Brolin's Cable character as "Thanos" manages to be, improbably enough, both lazy and sweaty at once, and is anyway in no meaningful sense an actual joke. Try it. Try raising that, or any other point. See what happens.

I'll tell you: The Deadpool franchise will feign shock, roll over on its back to expose its belly and lie there looking up at you like, "Brah! Why you takin' this so seriously, brah? Why you tryin' to like, analyze it, brah? What's wrong? U mad, brah? U mad?"

For the record: U aren't mad, exactly. But maybe U are alone.

Whenever Deadpool 2 tosses out one of its multitudinous references, causing you to recognize something onscreen that is occurring outside of its familiar context, a certain set of neurons fire in your brain. As it happens, that cluster of neurons is situated right next to the neurons that fire when something is legitimately funny.

Obviously the reflexive laughter of mere recognition can't compare to the earned laughter of actual comedy, but it is a kind of laughter, after all. And for the millions who will come to this film because they just want to spend a couple hours giggling at something, it's a distinction without a difference; I get that.

No one can deny that Deadpool 2, like its predecessor, is filling a hole in the cinematic-superhero marketplace. Its graphic, gleefully gratuitous and mystifyingly mean-spirited R-rated violence is there for a rigorously focus-grouped reason. The mainstream Marvel movies — your Avengers, your Doctors Strange, your Ants-Men — are happy to maintain their white-knuckle grip on a PG-13 rating, the better to maximize their prospective audience. But that means their violence must remain assiduously entrail-free. They're eye-popping, just not literally. Visuals, not viscera.

Maybe Deadpool 2, with its merry fusillade of lopped-off body parts and mangled torsos and arterial spray, is just being more honest about what the world would look like, if superheroes truly existed. Either that, or it's just cynically indulging the bloodlust of viewers who regard badassiness as the only meaningful superhero currency, because they grew up reading the blithely violent (and not for nothing, hilariously awful) '90s comics that birthed Deadpool and many of this film's co-stars.

Certainly the superhero genre has grown broad enough for this franchise to slot neatly into its own sub-genre. Consider: Dark Knight, Man of Steel and Batman v Superman and Logan do Grim 'n' Gritty. The Avengers and their ilk do Big 'n' Spectacular. The Marvel heroes over on Netflix have cornered Scrappy 'n' Street-level. Think of the Deadpool franchise, then, as charter member of Glib 'n' Smarmy.

The tenets of GnS, as a subgenre: A facile, default, entirely unearned cynicism that attempts to pass itself off as irony. A principled rejection of sincerity, restraint, selflessness and altruism. Stakes that are there to be merely winked at, goalposts in perpetual motion. A willingness to mercilessly lampoon superhero cliches — all superhero cliches! Every last one!

Yes, Deadpool 2 eagerly puts many of the hoariest superhero tropes on blast — so many that this ceaseless mockery quickly supersedes the film's actual plot (which has to do with Deadpool befriending a troubled young mutant played by Hunt for the Wilderpeople's excellent Julian Dennison) to protect him from Brolin's time-traveling cyborg).

And yet, amid all that overdue and well-deserved scorn, the lone aspect of Deadpool 2 that is treated with gravid, wet-eyed sincerity — the thing the film wants us to care most deeply about, that acts as the plot's triggering action — is itself the biggest, oldest, dumbest and most useless superhero-genre cliche of them all.

Why on earth would the filmmakers not only make that the single superhero trope they spare from scorn, but then go ahead and lay all of the film's emotional chips down on it? Why? How does that make even the smallest amount of sense?

I guess I sort of am.