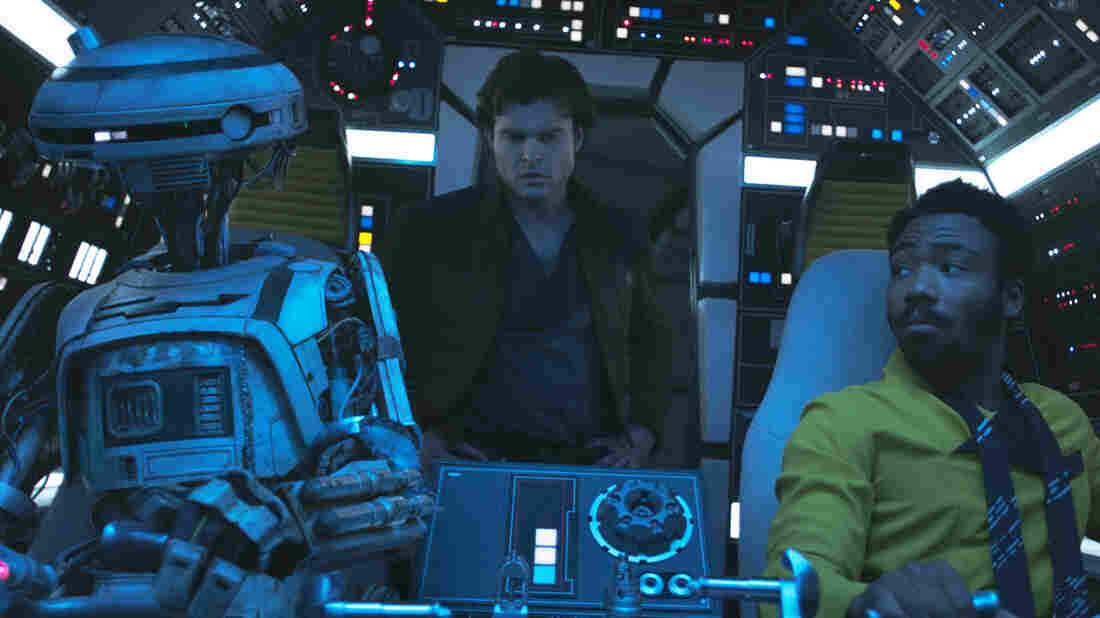 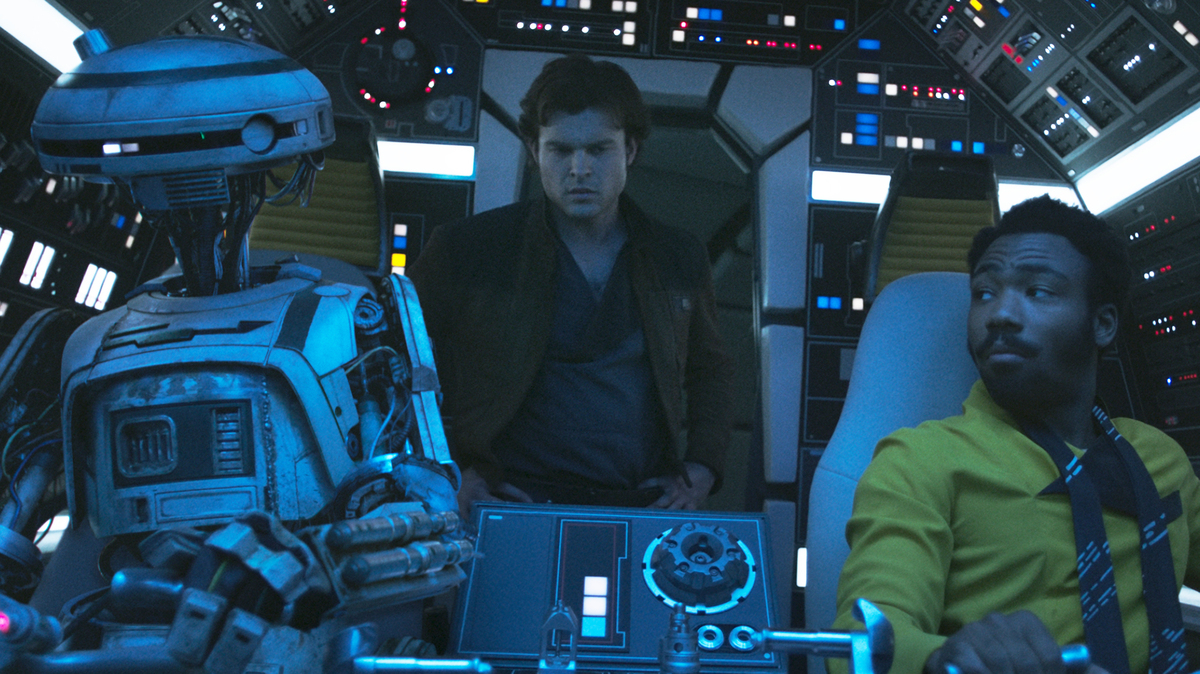 It's 1983. Late May. An unprepossessing strip mall in Anywhere, USA. You and your friend are leaving the theater in which you have just finished watching Return of the Jedi, the (so you think, you beautiful idiot) culminating chapter of George Lucas' soaring space opera, with which you are love-drunk. You have followed it, devotedly, passionately, since the moment the lights first went down in the theater of your screening of the first film (which you did not know to call Episode IV, you gorgeous naif) six years before. You own every toy, and most of the rarer Topps trading cards. You can quote dialogue. You have memorized the score.

But now, you and your friend step into the cool evening. He pauses there in the darkening parking lot, and as he does so, the streetlamps flare to life, one by one. He is breathless, flushed. His eyes glisten. "That," he says, "was AWESOME."

You shake your head. "What's WRONG?" you say. "You're kidding. You really don't see it?"

"See what?" he says, his face slack with uncomprehending surprise. And to think, you once thought him a fellow fan. As if.

"That giant loose end!" you say. "The question that they just completely ignore! The one we need to know to make sense of the whole trilogy!"

He stands there, moths darting around his thick, not-truly-a-fan head, and he blinks at you. "What question?"

You pinch the bridge of your nose. Fine. You'll have to spell it out for him, then. Unbelievable.

"How," you say, as if you are addressing a recalcitrant Pekingese, "did Han Solo get his blaster pistol?"

"We never found out who gave him his blaster pistol!" you shout.

Or maybe it's not the blaster pistol. Maybe instead, you shout, "What specific Sabacc hand did Han play to win the Millennium Falcon?"

Or "In the first heist that Han and Chewie ever pulled together, what was their cut?"

Or "Was Lando somehow even more inordinately hot, when he was younger?"

Or "Do those dice hanging in the Falcon perhaps bespeak a melancholy tale of Han's first, lost love?"

You get the picture: Should you harbor burning questions about infinitesimal details of Han Solo's backstory that are entirely and hilariously immaterial to the Star Wars saga's broader tale, or if you're prepping for a Han Solo-themed pub quiz, know that fan service doesn't get more serviceable than Solo: A Star Wars Story.

For everyone else: Donald Glover's Lando is really, really smooth and funny!

Inasmuch as Solo is, expressly and unambiguously, an origin story, it contains numerous winks to the more well-versed members of the audience (as when a character demands of Han, "Do you know what it's like to have a price on your head?" har har har). Actually, wink implies subtlety — which is not, for director Ron Howard and screenwriters Jonathan and Larry Kasdan, a going concern.

And that's fine; those looking to the Star Wars Universe for Chekhovian nuance will only come away poking their lightsaber at an empty cloak. But the filmmakers seem so worried about losing the casual audience that they flood roughly the first third of the film with expository dialogue so thick and clunky that even a high-speed chase through the streets of the spaceship-building planet Corellia feels stuck in neutral. Again and again, the film's early going gets hamstrung by this dogged, doomed attempt to serve two masters — the hardcore fan seeking nerdy validation and the casual viewer seeking a couple of hours in an air-conditioned movie theater.

Things measurably improve once Han (Alden Ehrenreich) meets Chewbacca (Joonas Suotamo) and the screenplay starts to jettison its cumbersome setup infrastructure to become what it truly wants to be — a heist film. Or technically, a heists film, as Han and Chewie team up with a ragtag gang of outlaws led by Woody Harrelson and attempt a great space-train robbery while evading both the Empire and pirates and, later, raid a certain mining colony whose name has cropped up in the saga before.

Why is that so crucial? Because it means that at least this Star Wars film will not require its characters to blow up yet another big super-weapon at its climax. Small mercies.

Once Glover's Lando appears, alongside his droid co-pilot, voiced by the great and good Phoebe Waller-Bridge, the film finally embraces an animating sense of humor — Glover smoothly pitches his voice down an octave and cocks an eyebrow to evoke a young Billy Dee Williams, and Waller-Bridge's droid nurses a surly resentment at the chronic mistreatment of her kind.

To say much about the character played by Game of Thrones' Emilia Clarke would spoil some of the film's juicier reveals, but let it suffice to note that she is no distressed damsel in need of rescuing, and she is playing a longer game than the impulsive Solo can comprehend.

As for Solo himself — Ehrenreich wisely doesn't try to imitate Harrison Ford's iconic delivery; he finds his way into the character by emulating O.G. Solo's persona through sidelong smirks and bluff threats. He is satisfyingly on-brand.

Yes, we do find out who gave Han that blaster pistol — and no, it doesn't matter in the slightest. It doesn't enrich our understanding of the character, it doesn't shine any meaningful light on the forces that shaped him, it's just a box that gets checked along the way to getting Han and Chewie into the Falcon's cockpit.

That blaster's provenance, and the film around it, aren't necessary. Solo doesn't answer a widely held need. But neither does it blithely complicate or invalidate anything the previous films have established. And that may be the only yardstick that matters, given the track record of this franchise. The Phantom Menace gamely attempted to explain things that needed no explanation (midi-chlorians) and was convinced that seeing the galaxy's most terrifying enforcer as a tow-headed moppet ("Yippee!") would cast him as a tragic figure, and not simply an annoying one.

Solo, gratifyingly, possesses no such ambition or misplaced confidence. Because it sets its sights lower, its aim is truer. It may not look like much — but it's got it where it counts.