Accessibility links
'A Shout In The Ruins' Probes The Lasting Infections Of War And Slavery Kevin Powers' bleak, stunning new book is set in both the 1950s and the Civil War era. It's an intricately plotted look at the ways violence can shape a nation in ways that may not be recoverable. 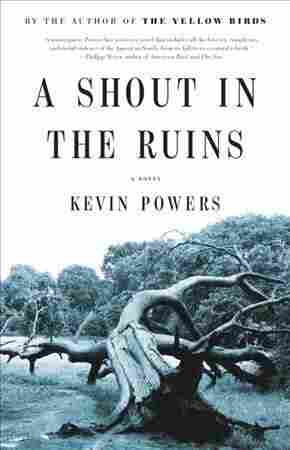 A Shout in the Ruins

Title
A Shout in the Ruins
Author
Kevin Powers

Towards the end of Kevin Powers' second novel, A Shout in the Ruins, a young man wandering the country in the days of the Civil War comes across a boy his own age dressed in a Confederate uniform. The stranger, in a paranoid fit of rage, slashes the boy's neck and shoots and kills his dog. The stunned boy wraps his pet's corpse in a Union blanket, and comes to a sad realization: "The simple fact was this: it was hard to find a soul left anywhere on earth who believed that there was dignity in death."

The characters in Powers' bleak, stunning novel are subject to indignities too countless and cruel to name. Like his debut, The Yellow Birds, it's a searing look at the ravages of war, and how violence can shape a nation in ways that may never be fully recoverable.

A Shout in the Ruins takes place in both the 1860s and the 1950s, with chapters alternating between the two time periods. The novel opens with the birth of Emily Reid, the daughter of a white Virginia businessman named Bob Reid; Bob Reid owns two slaves, a woman named Aurelia and her son, Rawls. The young man had been mutilated by his previous master, and understandably regards whites with suspicion: "He had no respect for white folks anymore, and very rarely fear, but he sometimes pitied them, allowing himself pity only because he had once heard a traveling preacher say that pity was the cruelest feeling one could have toward another."

Rawls is in love with Nurse, a slave on a neighboring property, but she disappears suddenly — rumors suggest she's been taken to the infamous Lumpkin's Jail in Richmond. When Rawls escapes to try to find her, he's caught and sold to Antony Levallois, a sadistic plantation owner who at one point hisses to a slave, "You cannot even die unless I allow it. All that you have been and all that you will ever be, I own." Meanwhile, Bob Reid is injured severely in the war, and returns home to find that his daughter is engaged to Levallois, whom he's never really trusted.

The chapters that take place in the 20th century follow George Seldom, an African American man in his 90s who's decided that his life has come to an end. The state is in the midst of tearing down his neighborhood to make room for an interstate highway, so he packs a few possessions and heads to North Carolina, where he was raised — a foundling child, George knows little about his childhood, and wants to find answers: "As to his beginning, he knew nothing. That part of him had been a void so long it had taken shape around its edges."

The connection between George and the Civil War-era characters is revealed slowly in the novel, and it never feels forced or unnatural — A Shout in the Ruins is intricately plotted, but not strained or gimmicky. Powers uses suspense ably; even when the reader realizes something awful is about to happen, it's difficult to stop turning the pages.

It won't surprise anyone who's read 'The Yellow Birds' that Powers is a hell of a writer.

It's nearly impossible, of course, to write about war and slavery without depicting violence, and Powers doesn't shy away from scenes of unspeakable cruelty. It can be difficult to read, but there's nothing lurid or sensational in the novel; the inhumanity in the book is presented honestly, in a matter-of-fact way that manages to make it even more chilling.

It won't surprise anyone who's read The Yellow Birds that Powers is a hell of a writer. His use of language in A Shout in the Ruins — inspired, perhaps, by William Faulkner -- is nothing short of brilliant, and he connects with his characters in a very real way; he explores their psyches with an uncommon sensitivity. This is particularly true with George, the nonagenarian who's considering his life as he nears its end: "He wondered if the world had been kind to him. It would take everything from him eventually, but it seemed to him that it would not take anything that had not belonged to the world first."

In the course of just two novels, Kevin Powers has already become one of the most original and exciting voices of his generation, and A Shout in the Ruins is a singular triumph of a book. It's a novel that powerfully explores how slavery has infected this country, and how history is never really confined to the past. As Powers writes about George, conceived during our nation's darkest period, "The trouble he was born with was not the kind that can be locked away in a cedar chest and left behind. And he also knew that the terms the world lays out for us are not negotiable."