Accessibility links
'All The Answers' Can't Answer Its Central Questions — And That's Just Fine Cartoonist Michael Kupperman's new memoir recounts his attempts to get at a great mystery in his father's life — his childhood in the spotlight as a contestant on the Quiz Kids radio show. 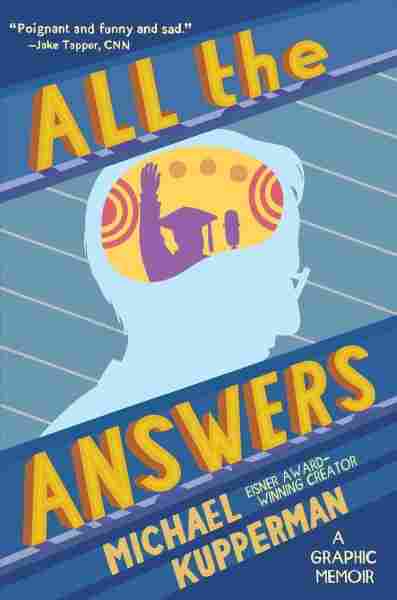 He didn't get that from his dad.

Kupperman fils' comics — many of which gleefully slam together characters and media that should have nothing to do with each other, then comb through the resulting iconographic rubble to find bizarrely hilarious affinities — have appeared in scores of magazines, newspapers and books. He's written five books of his own that adopt that same approach, resulting in mixed-media mashups of vintage photography enlivened by Kupperman's expressive linework and slyly surreal wit.

Kupperman pere, on the other hand, spent a long career as an author and a professor of philosophy — a field not known for its superfluity of yuks. But he'd spent most of his childhood as an internationally known celebrity — a contestant on Quiz Kids, a trivia game show which began on the radio, then transferred to television. It starred a passel of child prodigies who dazzled audiences with their command of facts and figures. Little Joel Kupperman was, at first, one of the more popular Quiz Kids; with his lisp, his mathematical prowess and his insistently raised, perpetually waving hand, he became a star.

But then, something happened. Something that caused the adult Joel Kupperman to pull a mental curtain across the youthful experience that shaped him, and refuse to discuss it with his friends, his colleagues, his wife and, especially, with his son.

'Soviet Daughter': How A Great-Grandmother's Diary Became A Graphic Novel

All The Answers is his son Michael's attempt to discern, through the steady accretion of research and interviews, the shape of that mysterious something. It's by no means the first graphic memoir in which an adult child endeavors to map the obscured and shifting landscape of their parents' past, and it won't be the last. It's a rich subject, after all: Books like Fun Home, Soviet Daughter, You'll Never Know, We Are On Our Own and, most famously, Maus, are all about grappling with the need to learn a parent's story — and the frustration that descends when the passage of time and the fading of memory inevitably curtail that work. This fundamental unknowability is the stubborn truth at the heart of these books: We can never see our parents lives the way did, or feel what they felt. The only way to string together anything that approaches understanding is by studying whatever trailing wisps of memory persist, whether they're frozen in scrapbook snapshots, or recalled suddenly in fleeting moments, flashes of insight.

That reconstruction is precisely what All The Answers sets out to do, through Kupperman's assiduous attention to detail, his beleaguered sense of compassion and, ultimately, grace. There's urgency here, too, as over the course of compiling this memoir Michael realizes his father is steadily sinking into dementia — we sense the son's mounting exasperation as his father grows increasingly abstract and removed.

Kupperman's photorealistic black-and-white art is deliberately and artfully un-realistic here; his panels float on the page like lingering afterimages burned into your retinas. The details have vanished, but the contours of faces, the silhouettes of bodies, persist. This effect heightens the book's tension by visually reinforcing the frangible nature of his father's story — both it, and he, are fading.

Kupperman's photorealistic black-and-white art is deliberately and artfully un-realistic here; his panels float on the page like lingering afterimages burned into your retinas.

The nature of his father's antipathy toward his celebrity past emerges slowly — Kupperman finds old scrapbooks kept by his stage-mother grandmother and combines these with much-needed context about the era. Quiz Kids was, we learn, a propaganda tool produced in the middle of World War II. Its producer was devoted to providing the country with positive image of Jews — and child genius Joel Kupperman fit that bill perfectly.

What happened next, and what soured the adult Joel on the whole experience, is a matter of public record, and I won't go into it here, as the those are precisely the dots — how and why a gleefully happy know-it-all child prodigy became an introverted, taciturn adult academic — that All The Answers seeks to connect.

What it can do, and very well, is evoke the culture of mid-century America, and Joel Kupperman's place in it. It can also document Michael Kupperman's sense of his own place within his family — in his father's eyes, in particular. That's because Kupperman the Younger makes himself vulnerable, and emotionally available to the reader, even as Kupperman the Elder hovers forever just beyond our grasp.

You'll likely wonder if that distance has something to do with the cartoonist's inability to get inside his father's head. That inability isn't a failure of All The Answers, however. It's a failure, if you want to call it that, of its chief subject — a man so wounded by his very public life that its pain insinuated itself into his very private life. The legacy of that pain, and the retreat from it, means a son's attempts to understand his father relies on a series of intuitive leaps, and educated guesses.