Accessibility links
Not My Job: We Ask Singer Cyndi Lauper 3 Questions About The Titanic Lauper was one of the icons of the 1980s with hits such as "Girls Just Want to Have Fun." Change two letters in the title of her musical Kinky Boots and you end up with "sinky boats." Hence, our quiz. 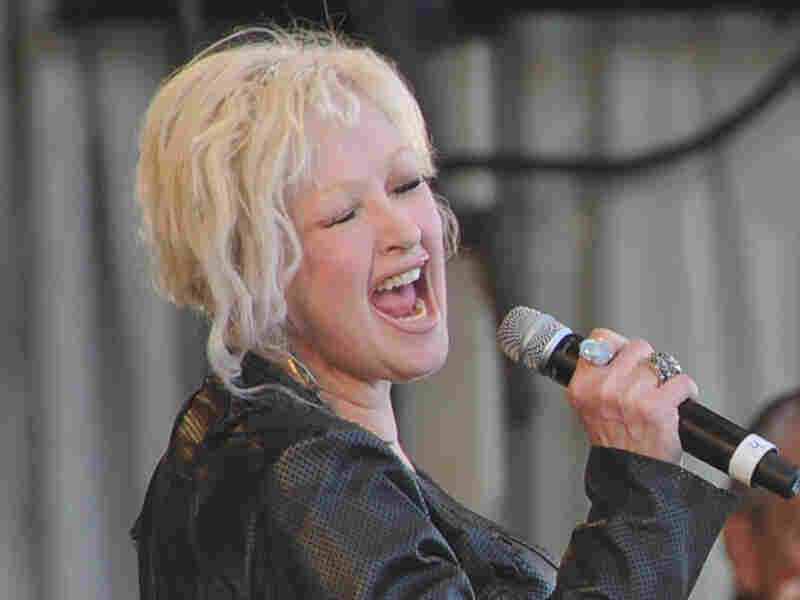 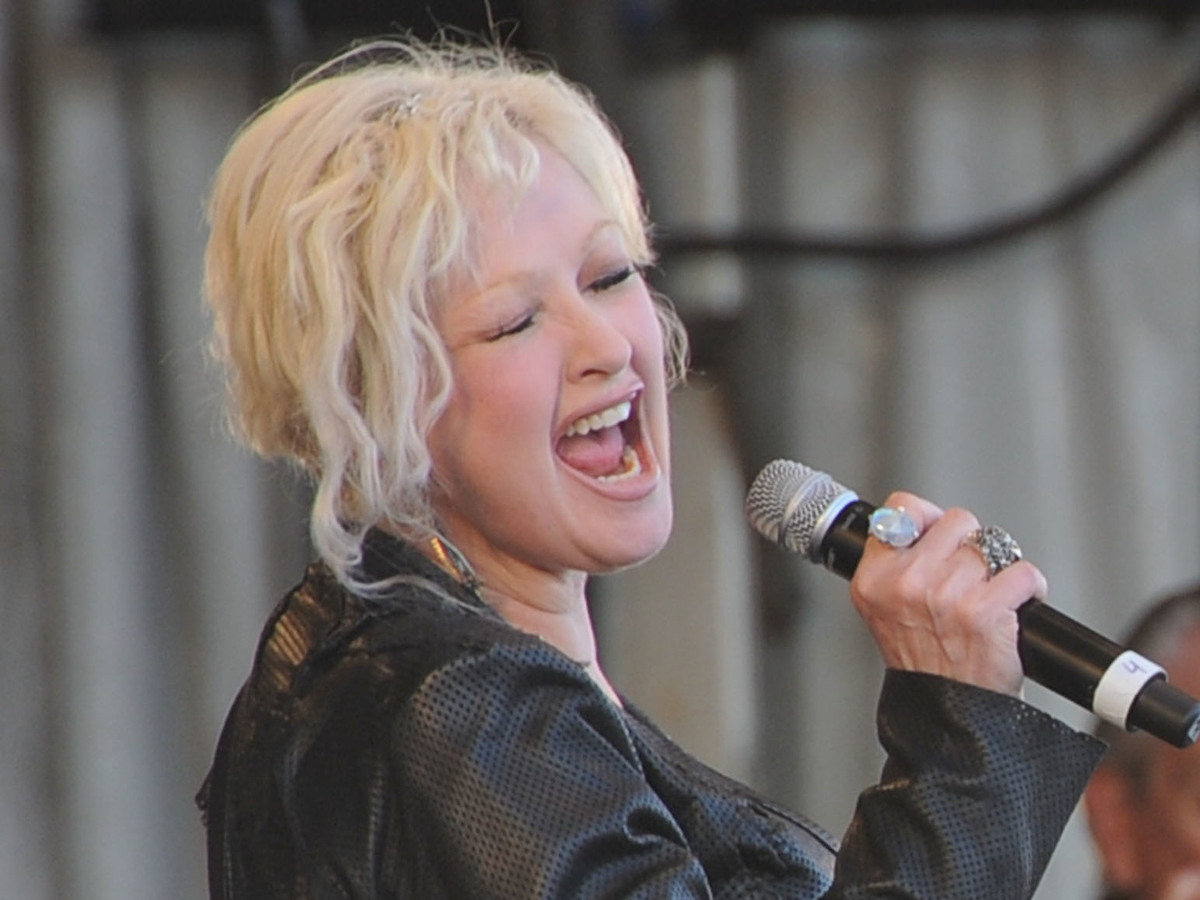 Cyndi Lauper was one of the icons of the 1980s with hits such as "Girls Just Want to Have Fun," "Time After Time" and "True Colors." She has won Grammy, Emmy and Tony awards.

We've invited Lauper to play a game called "I'm the King of the World!" Change two letters of the title of her musical, Kinky Boots, and you end up with "sinky boats." We'll ask her three questions about the Titanic.

Click the audio link above to see how Lauper does.

And now the game where people we love come on and answer questions about things they don't necessarily like. It's called Not My Job. Cyndi Lauper was one of the icons of the 1980s, with her videos, her looks, the hits, like "Girls Just Want To Have Fun," "Time After Time," "True Colors." She's gone on since then to win Grammys and Emmys and multiple Tonys for her musical "Kinky Boots."

CYNDI LAUPER: No, just one Tony.

SAGAL: Well, the show won a bunch. I know you're being modest.

LAUPER: Yeah, the show did. Yes.

SAGAL: And now her long journey has brought her here for some reason. Cyndi Lauper, welcome to WAIT WAIT... DON'T TELL ME.

LAUPER: Oh, thank you. Thank you very much.

SAGAL: So this is interesting to us today for a bunch of reasons, but it turns out that your origin story lies in a far-off land called Queens, is that not right?

LAUPER: Yes, Ozone Park. But actually, that's not where it started. It started in Williamsburg. But actually, I was born in Astoria from a cab ride, which I was almost in a cab, like, you know.

SAGAL: You were born in - you're one of those stories - you're almost born in a cab.

LAUPER: Yeah. And I'll tell you, I ain't been right ever since.

SAGAL: And how did you get into music initially? What were your first jobs when you were getting started?

LAUPER: Well, I was the hot walker at Belmont.

SAGAL: You were a what?

LAUPER: You walk the horses. You walk the horses when they're hot. You got to get there really early, though. That's really tough, you know, 'cause you're up at 4 a.m., you know. I used to - you know, I had run away to Long Island because I lived in the city, and I thought I was missing something in suburbia.

LAUPER: So I ran away to suburbia. And then I realized, hey, what the heck am I doing here, you know?

LAUPER: And then I was going to be a painter, so I went to Canada to the Algonquin Provincial Park, and I did a tree study. I just drew trees. And then unfortunately, I went with my dog at the height of the black fly season, so that kind of didn't work out very well.

SAGAL: Wait a minute. You decided - you're living in suburbia, this is a mistake. You said, I know, I'm going to go to Canada to be an artist and draw trees.

SAGAL: But you brought your dog, and it was black fly season, and everybody knows that's a mistake.

LAUPER: Yeah, that was a mistake - big mistake. We were all bitten up - both of us.

LAUPER: Yeah, it was.

SAGAL: ...I guess, really, just pop stardom was a last resort for you.

LAUPER: Yeah. Well, it's a gal, Friday, who's really horrible at her job.

SAGAL: I've got to ask you, back in the '80s, one of the things you were known for was, like, you were really into wrestling.

LAUPER: Yeah. I was a wrestling manager for a while. I was Captain Lou Albano...

SAGAL: Yeah. I remember this.

SAGAL: Did you - is there a story with him and your famous song "Girls Just Want To Have Fun," I'm told?

LAUPER: Oh. We had a fight, and I was on the Roddy Piper show - you know, "Piper's Pit"? And I was talking to Roddy, and all of a sudden, Lou came on, and he said - you know, he starts talking about women, you know, that we belong barefoot and pregnant in the kitchen, and, you know, he was the one that did everything. But he started to say, like, real sexist stuff.

LAUPER: And I said, Lou, you're starting to make me angry, right? And then he wouldn't stop. And, you know, when you're hanging out with wrestlers, wrestlers have episodes, but if you hang out with them, sometimes you have an episode yourself. And I did.

SAGAL: This happens to me all the time, so...

SAGAL: Did you hit him with a folding chair? What did you do?

LAUPER: No. I turned over the table, and I pulled on his beard and hit him with my purse over the head.

SAGAL: Most people don't know this, but you, Cyndi Lauper, have won an Emmy for your performances on TV - "Mad About You" - a Grammy for your records, a Tony for "Kinky Boots."

SAGAL: How are you going to win your Oscar?

LAUPER: Yeah. Everybody says that. I'm going to have to now because, you know...

LAUPER: I got some time left. I am still above the grass, you know what I mean?

SAGAL: Well, we think you'll do it. But in the meantime, Cyndi Lauper, it is a pleasure to talk to you. And we've invited you here to play a game we're calling...

SAGAL: You wrote the show "Kinky Boots," and it just so happens if you take "Kinky Boots" and you change two letters, that makes Sinky Boats.

SAGAL: We're going to ask you about the most famous sinky boat of all time, the Titanic.

SAGAL: Yes. Get two right, you'll win our prize for one of our listeners - the voice of your choice on their voicemail. Bill, who is Cyndi Lauper playing for?

LAUPER: Allison, I'm going to do my best, hon. OK.

SAGAL: Here we go. Here's your first question. It's well-known that the musicians aboard the Titanic played on as the boat sank. To show their appreciation, the company that hired those musicians for the crews did which of these things? A, they created a special Music From the Titanic tour in which the band finished with "Nearer, My God, To Thee" and then were splashed with ice water; B, they created the first ever contract rider specifying that all the musicians, no matter where they played, on land or at sea, be provided with life jackets, or C, they billed the musicians' families for the cost of the uniforms that the musicians were wearing when they sunk?

LAUPER: Oh, my God. All right. Well, A sounds funny, but I think it's really B.

SAGAL: You think it's really B, they - the first ever contract rider?

LAUPER: Well, what else could they have done? They're not going to charge them for the uniforms. Come on. (Pause) They charged them for the - so I was wrong? It's not B?

SAGAL: Well, you haven't said anything yet, so.

SAGAL: It's C, yeah. They actually did that.

SAGAL: The father of one of the musicians got a letter asking him to pay the deposit on the uniform. He did not.

SAGAL: Your next question - the sinking of the Titanic led to safety improvements on future ships, as in which of these? A, the HMS Bannon installed a speaker at its bow that constantly played the message, out of the way, iceberg...

SAGAL: ...B, the SS Eastland added additional lifeboats, which made it top-heavy, and it eventually capsized as a result, or C, the SS Humphrey required all passengers to wear scuba gear at all times, just in case?

SAGAL: Yeah. It was the Eastland.

SAGAL: Happened here in Chicago. Bad idea, but it's the thought that counts.

SAGAL: Your last question is about the former SNL star Bill Hader. The Titanic played a significant role in his career. What was it? A, he auditioned for "Saturday Night Live" with his character, Blinky, the blind Titanic lookout...

SAGAL: ...B, a Titanic-obsessive, he only went into performing to earn enough money to buy an actual Titanic lifeboat oar, or C, he was fired from a movie theater in 1997 after he punished noisy patrons by going up to them and spoiling the ending of the movie "Titanic"?

LAUPER: Well, first of all, he could never have spoiled the ending because everybody knows the boat sank.

LAUPER: All right. So can you go over that one more time?

SAGAL: Yeah. OK, I'll go over it again. So that was the third one.

SAGAL: My first one was he auditioned for Saturday - you know how you audition for "Saturday Night Live"? You present a character.

SAGAL: He presented the character of Blinky, the blind Titanic lookout.

LAUPER: I think that's it.

SAGAL: It was actually the last one. He spoiled the ending.

SAGAL: He was working as an usher. But he didn't just go up and say, oh, by the way, the boat sank. He sat down next to them. He said, let me tell you what happened. The boat sinks, and Rosie and Jack go into the water. And then, they find this door. He told them the whole thing, and so he was fired by the movie theater. Went on to better things.

SAGAL: Bill, how did Cyndi Lauper do on our quiz?

KURTIS: I think she got two right, which means that you won, Cyndi.

SAGAL: Cyndi Lauper is a Grammy and Tony Award winner. This year marks the 10th anniversary of her True Colors Fund. And you can catch her on tour with Rod Stewart this summer. Cyndi Lauper, thank you so much...

SAGAL: In just a minute, Bill takes you to prom in our Listener Limerick Challenge game. Call 1-888-WAIT-WAIT to join us on the air. We'll be back in a minute with more of WAIT WAIT... DON'T TELL ME from NPR.