Accessibility links
The Case Of The Stolen Succulents California Fish and Wildlife agents are combating a rash of succulent poaching incidents on the state's coastline, apparently to satisfy a booming demand for the plants in Korean and Chinese markets. 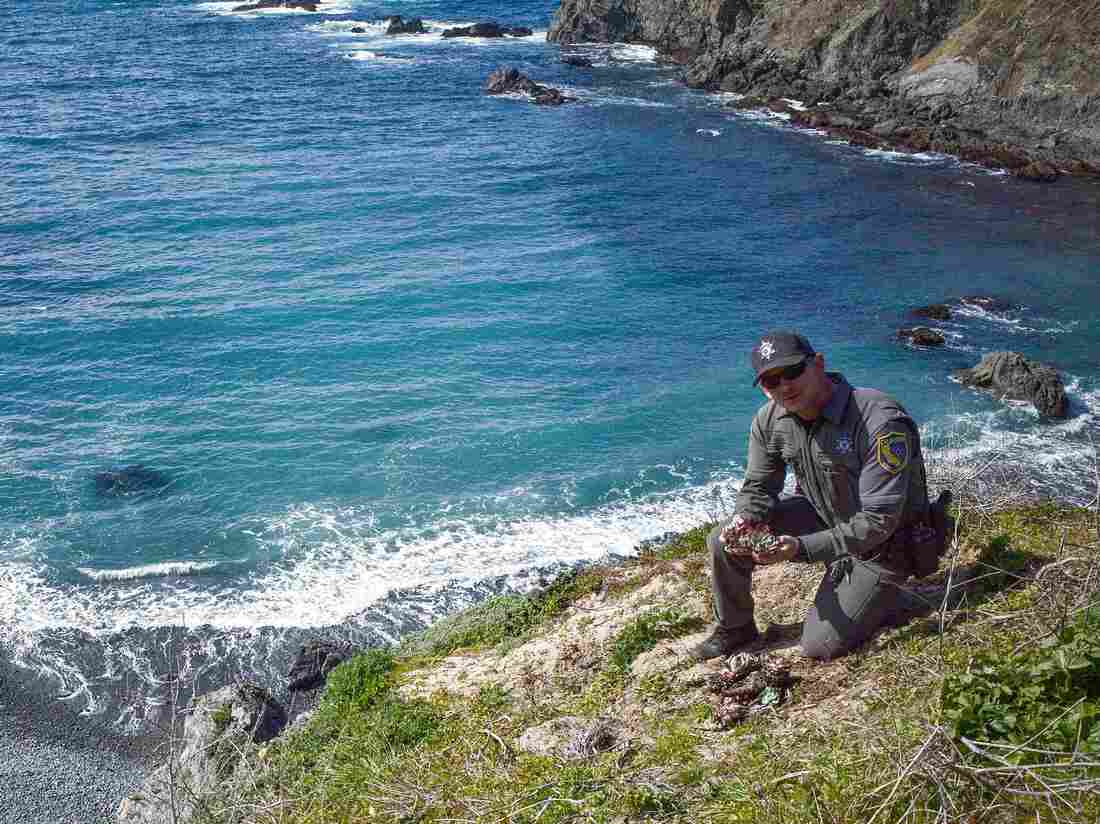 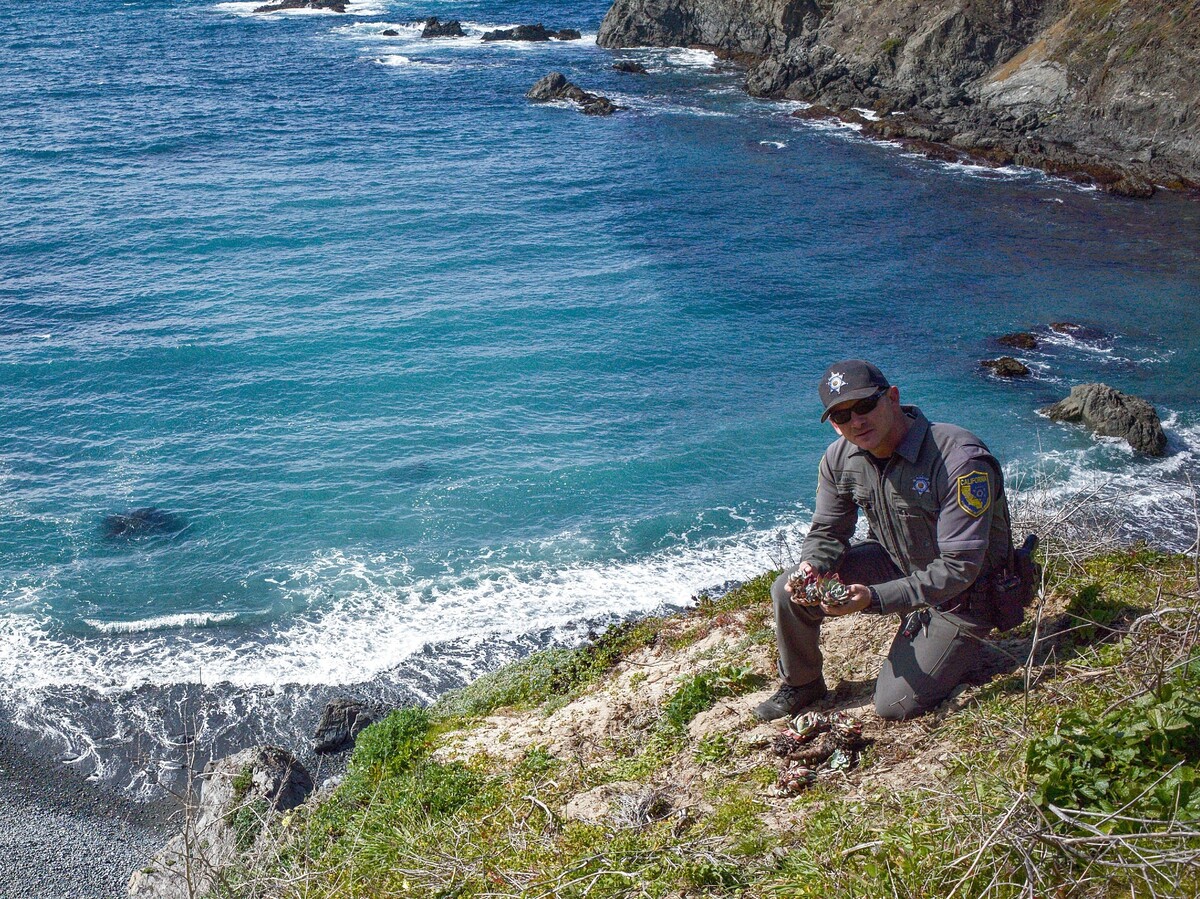 California Game Warden Pat Freeling got the first tip off that something was wrong in Mendocino county back in mid-December, when he received an anonymous call from a disgruntled postal patron.

The tipster told Freeling that she'd gotten stuck in the post office line behind a man, shipping dozens of large cardboard boxes to east Asia. When asked what he was shipping, the man apparently told the caller that it was something very valuable, and gestured toward the coastline.

The tipster suspected that boxes contained abalone, an edible sea snail and common target for poachers along the northern California coastline.

When Freeling asked the postal inspector to x-ray the boxes, what they found inside wasn't a bounty of illegal sea snails—but it was still fishy. The boxes were filled dozens of dudleya farinosa, a pale-green succulent plant, native to the coastal cliff sides of California, and known to laymen as "powdery liveforever," or "bluff lettuce." 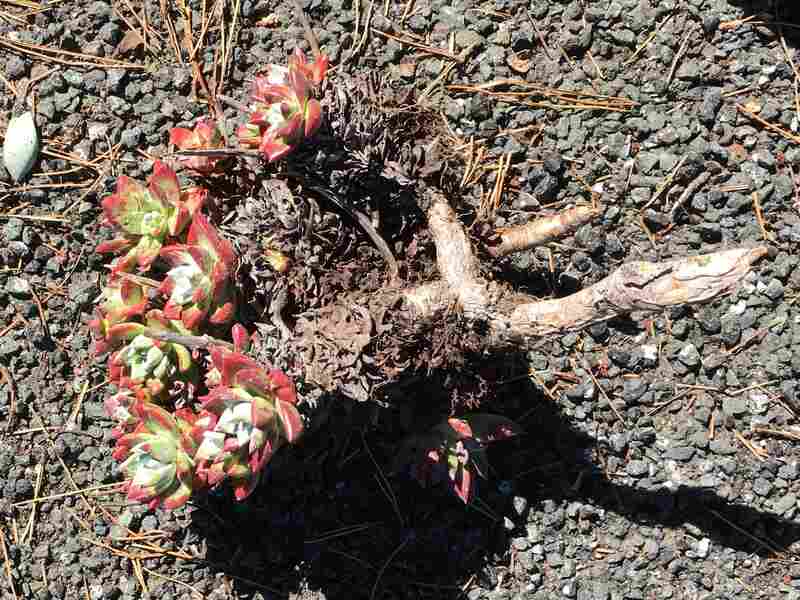 toggle caption
Courtesy of the California Department of Fish and Wildlife 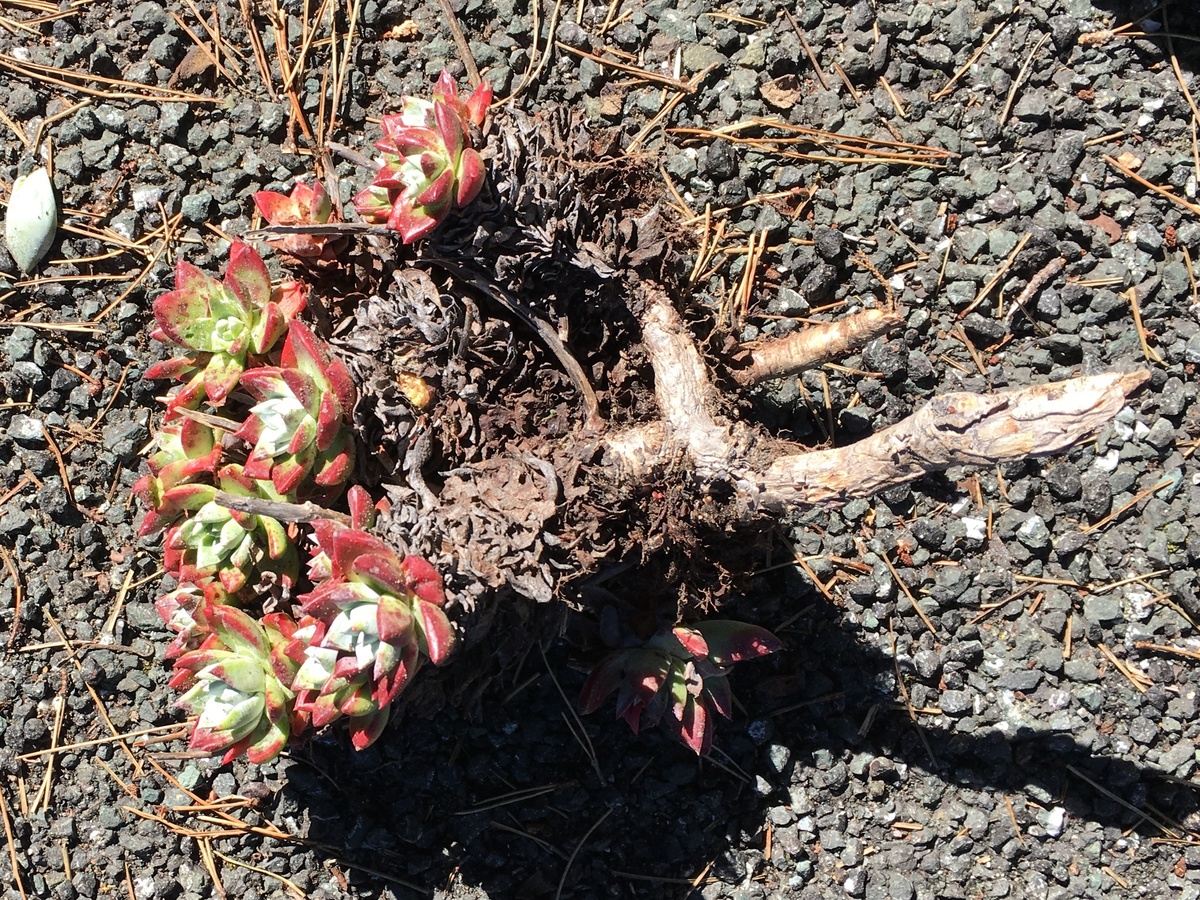 Courtesy of the California Department of Fish and Wildlife

"We didn't really think we had any violation at the time but at that time I said this is weird," recounted Freeling. "This is a gut feeling but I think this might turn into something"

So, when Freeling got another anonymous tip the next month about a suspicious man poking around a local cliff side with a backpack, he rushed to the scene. Sure enough, inside the bag, Freeling found around fifty wild succulents.

When asked why, Freeling says the man told him they were for his garden.

"I said 'that's nonsense," recalled Freeling. "I watched you on a film in the Mendocino post office mailing these to China,' and he said 'yes you're right. That was me."

Freeling issued a citation, and the man was eventually sentenced to a five thousand dollar fine, three years probation, and 240 hours of community service for unlawfully taking plant material.

At first, Freeling thought the case might have been a one off, but in March, he came across two men from Korea with a rental van packed with over eight hundred plants, recently hacked from the cliff side. 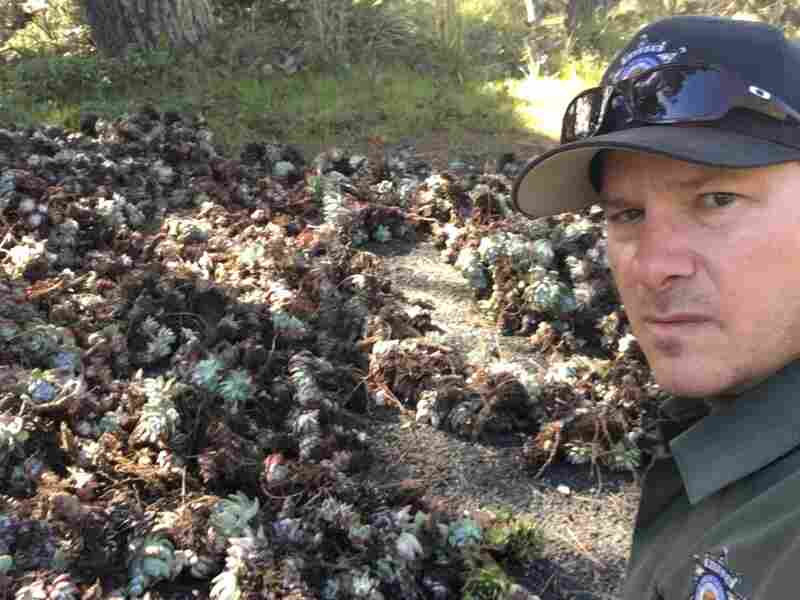 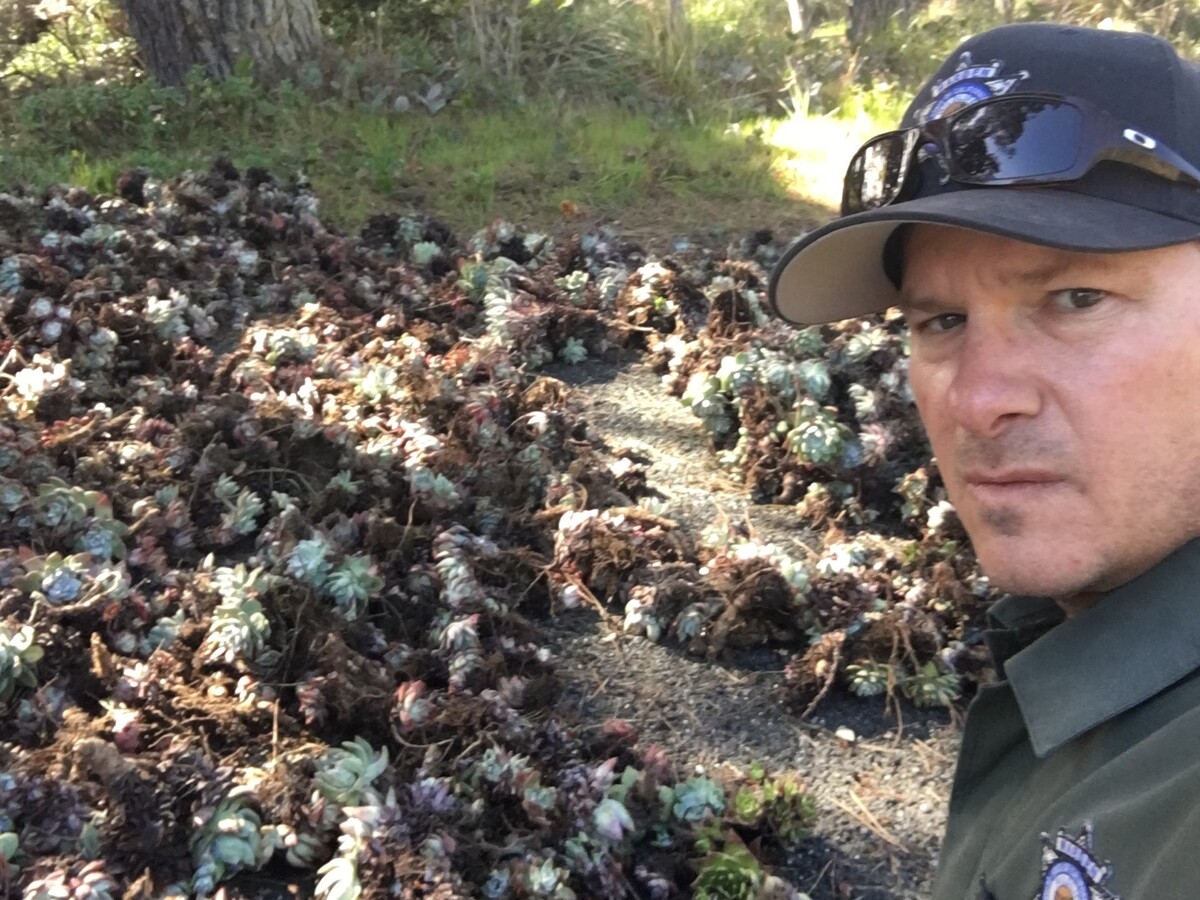 Pat Freeling in the middle of a dudleya poaching bust.

That bust got some local press, and Freeling began to suspect he'd stumbled onto something big.

"Within a 48 hour period I had been contacted by botanists, horticulturists, plant enthusiasts," said Freeling, "all concerned about the Dudleya poaching."

When Freeling dug into where the poached plants were going, he discovered that hipster millennials weren't the only group to have fallen for the succulent craze. According to his investigation, many of the seized packages were headed across the pacific to assuage a growing number of South Korea and Chinese consumers.

Kang Suk-Jung, a plant nursery owner in Hojawon, South Korea, has witnessed that boom firsthand. He says he first began to notice foreign succulents pouring into the country around 2005, but that demand has taken off in the past decade.

Kang says that non-native succulents have become particularly popular among Korean housewives, looking for many of the same qualities that have made them a hit in the U.S. They're collectible, neglectable, and eminently Instagrammable. But Kang says the market really took off when Chinese buyers entered the fray.

"Before Chinese people started to grow succulents, online markets would sell about 1,000 to 2,000 plants of a popular species," said Kang, "But after the Chinese customers started buying, even tens of thousands of plants would not meet the demand."

Kang says that demand was too high for domestic nurseries to meet in real time, because many of the most coveted varieties take decades to mature.

"That's why [naturally grown succulents] can be sold at a high price," said Kang. "Those plants had survived in their natural habitats for decades through rain and wind. That's what makes them beautiful. You can't grow succulents like them with artificial measures."

So, some plant purveyors started poaching fully grown, wild succulents from places like the windblown cliffs of Mendocino county, and according to the California Department of Fish and Wildlife, making as much as $50 dollars per plant on the black market.

"It was just wrong," said game warden Patrick Freeling. "There were people coming onto private property and taking plants that didn't belong to them. They belonged to the people of the state of California."

Freeling says that between five busts made in the past six months, his agency has seized thousands of plants, worth more than seven hundred thousand dollars in total. In April, dozens of volunteers gathered to replant over a thousand recovered dudleyas along the coast.

While dudleya farinosa isn't endangered, Freeling says it's important to take a strong stand against poaching so that the plant's status isn't jeopardized in the future, and to stem the erosion caused by its removal. He says the steady stream of citizen tips have given him hope that California's game wardens will be able protect the dudleya and their ecosystem in the long term.

"I'm a protector of the critters, of the plants, of the animals, that other people aren't able to protect," said Freeling. "We're here because Dudleya can't dial 911."