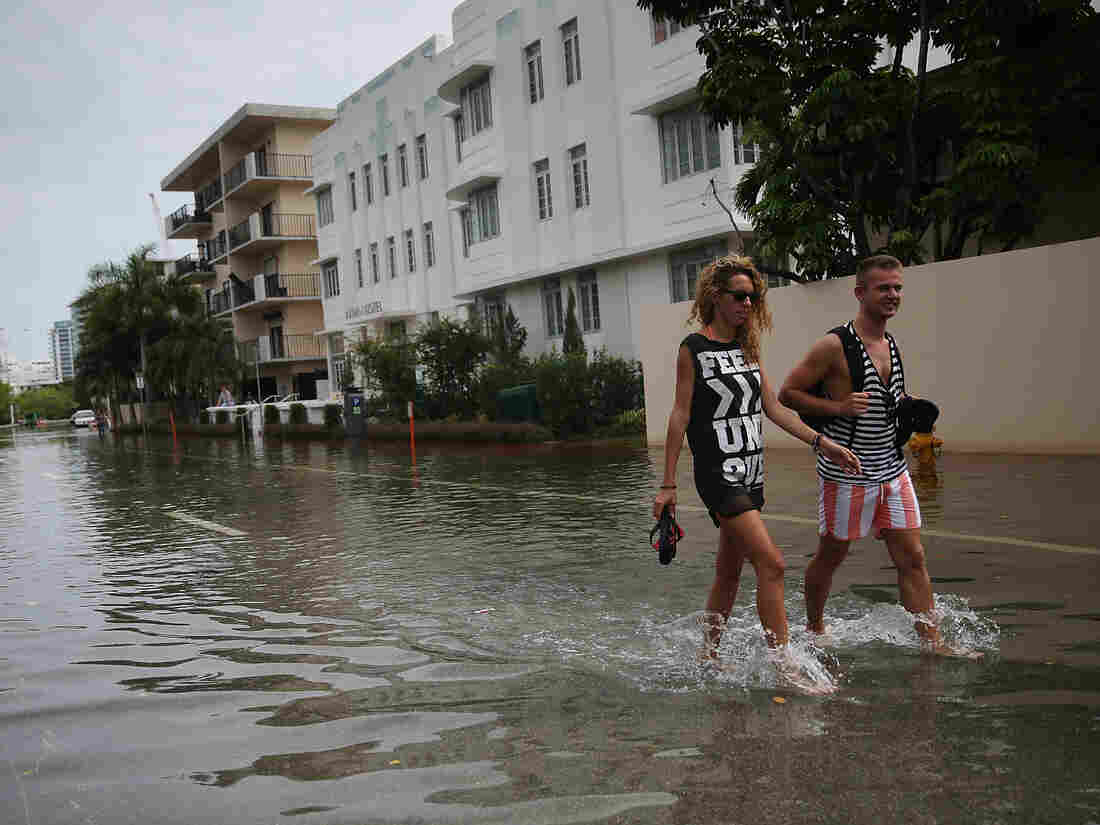 People walk through a flooded street in in Miami Beach, Fla., in 2015. The city is eyeing $500 million in infrastructure upgrades, installing 80 new pumps over a decade to redirect floodwaters back to the ocean. Joe Raedle/Getty Images hide caption 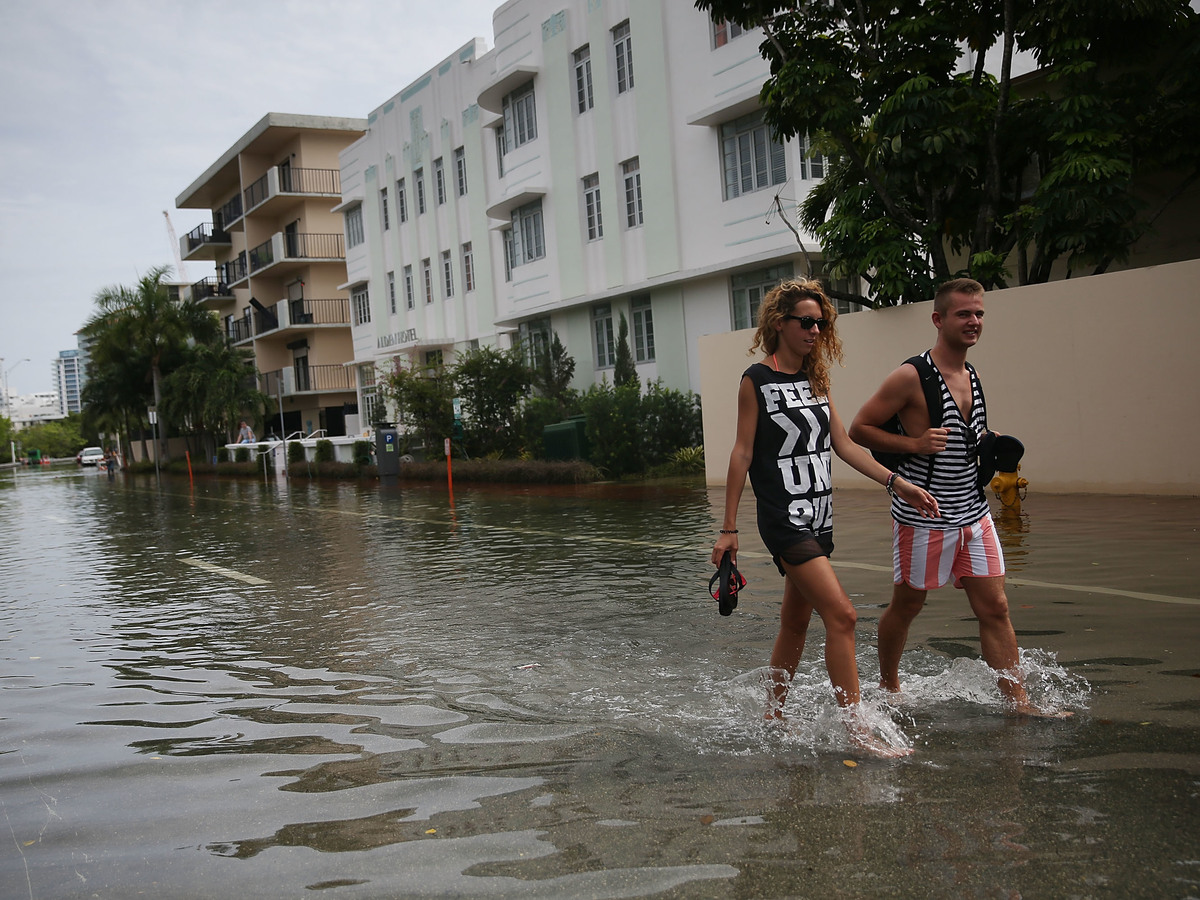 People walk through a flooded street in in Miami Beach, Fla., in 2015. The city is eyeing $500 million in infrastructure upgrades, installing 80 new pumps over a decade to redirect floodwaters back to the ocean.

The seas are rising, frequently flooding the streets even when no storms are on the horizon. But that hasn't stopped foreign investors from shelling out big dollars for Miami real estate. Many are in it for the relatively short-term investment, then they'll try to sell before climate change takes its toll, observers of the local market say.

Visit South Florida and you would have no idea this boomtown was a subprime war zone just a decade ago. In the aftermath of that collapse, Miami's skyline was dominated by half-empty buildings and idled cranes; condo associations had trouble collecting fees, and billboards advertised lawyers who swore they could wrest back your security deposit.

The notoriously boom-bust region was bailed out by foreign investors, who desired hard U.S. assets and a piece of the sun-kissed Miami dream. Eighty percent cash down payments became the new thing — and often sight-unseen: About 5 percent of South Florida foreign buyers snapped up local homes without even visiting; 18 percent bought with just one visit.

But accompanying this giddy ascent has been a gurgling anxiety at sea level.

Locals are increasingly finding even inland streets flooded during high tide — the rising Atlantic Ocean sluicing through the porous limestone that South Florida is built upon. Catfish and even an octopus have been spotted in the floodwaters, as storm drains operate in reverse. Miami Beach is eyeing $500 million in infrastructure upgrades, installing 80 new pumps over a decade to redirect floodwaters back to the ocean. The city of Miami approved a bond offering that would include about $200 million for projects to prevent flooding and mitigate sea-level rise.

Even so, Zillow estimates that by the end of the century, nearly half a million Miami homes could be submerged. That's tops in the country.

Donna Shalala, the former Clinton administration official and president of the University of Miami, says the economic risk of sea-level rise is top of mind by many property owners she meets on her run for Congress. She says people are worried about their homes and how the region will face the future.

"What we do with existing buildings, what kind of retrofitting we do, what kind of pressure we're prepared to put on our national government, is extremely important," Shalala says. "Look, I own an apartment down on Miami Beach that's right on the water; I really could not get hurricane and flood insurance. There's just no question."

The journal Ocean and Coastal Management reported that Miami Beach saw instances of tide-induced flooding jump by more than 400 percent between 2006 and 2013. People in swaths of South Florida know to drive to work with their shoes wrapped in grocery bags when the tide is especially high — rain or no rain. All while local officials race frantically to install those pumps.

Why would anyone pour several hundreds of thousands — or even millions — of wealth into such scary trends?

For their part, it appears foreign investors believe they can time the market.

The Miami Herald's Nicholas Nehamas won a Pulitzer Prize for his examination of foreign money in the skyline.

"Foreign investors think they're going to sell before climate change affects the price of their units," he says. "It's a case of the segment of the market most driving the market being divorced from reality."

These days, Sunny Isles, the stretch of North Miami Beach big with Russian investors, is often called Little Moscow. The neighborhood now features the Porsche Design Tower, a swank high-rise that literally resembles a Porsche piston shooting up from the shoreline. Residents can drive their cars up wide elevators and right into their apartments, each of which has its own garage. Grammy-winning superstar Alicia Keys was hired for the launch party, and the property even staffs a special concierge who does car washes and tire rotations. 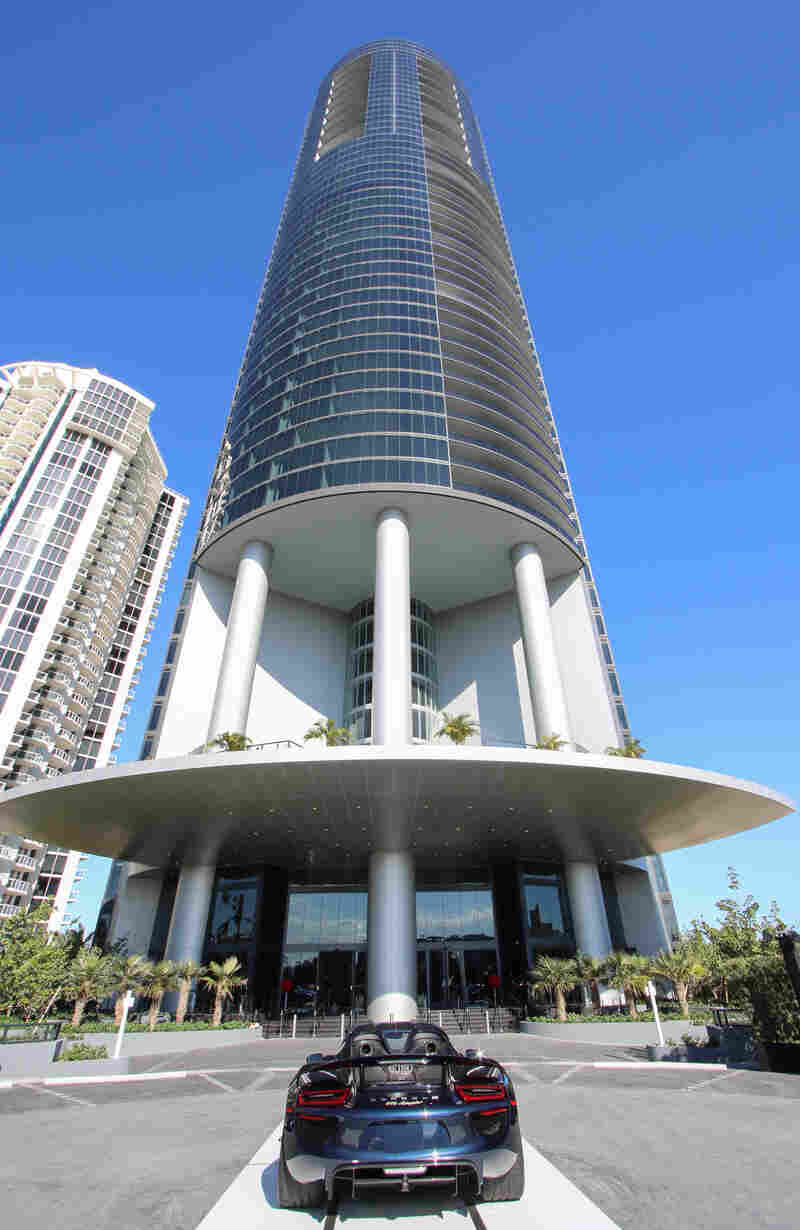 Residents of the Porsche Design Tower in Sunny Isles can drive their cars up elevators and right into their apartments. John Parra/Getty Images for Porsche Design hide caption 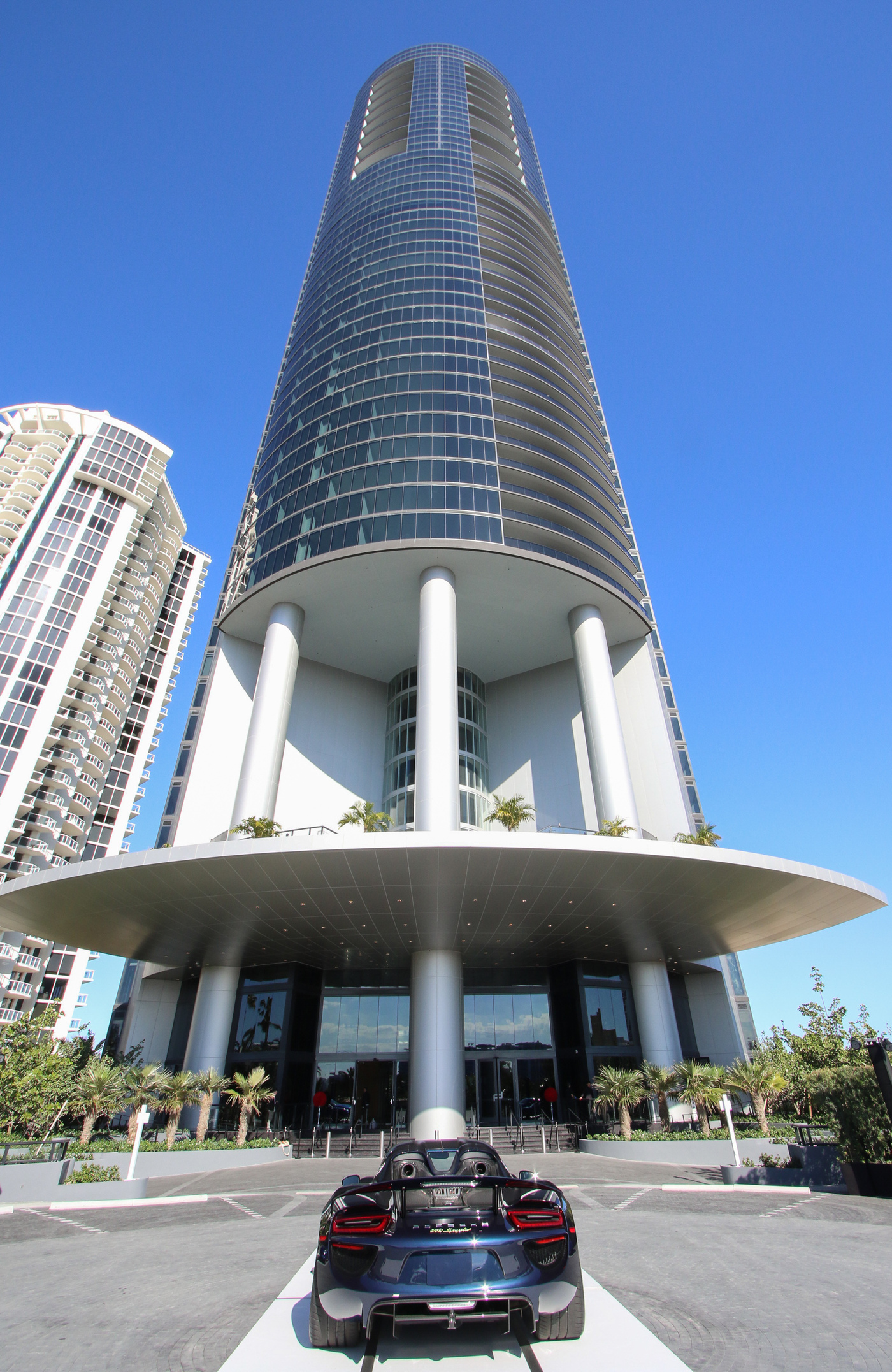 Residents of the Porsche Design Tower in Sunny Isles can drive their cars up elevators and right into their apartments.

New high-rises like the Porsche boast elevated garages and storm shutters that the building's superintendent will take care of with just a single call from an absentee owner in Caracas, Rio or Tel Aviv ahead of a hurricane. Leave all the sea-level rise anxiety to those on the ground.

Broker Peter Zalewski is one of Miami's most consulted condo specialists, especially by foreign buyers. "Many of the people I deal with — I'm not dealing with a family of four and a dog, I'm dealing with the investor — they're going to be in and out," he says. "Their horizon is typically three, five, seven years they're in and out. It's kind of an issue if you're worried about 10 or 20 years from now. It's not an issue if you're looking to capitalize on current market trends. It's a trader mentality."

South Florida dodged a bullet last summer when Category 5 Hurricane Irma weakened substantially on landfall after some 6.5 million Floridians were ordered to evacuate. In the nervous run-up, locals were wringing hands about whether banks would write 30-year mortgages and about the solvency of government-backed flood insurance — already too costly for most South Floridians to afford. What would happen to property taxes?

While the storm weakened, it still turned high-rise corridors into rivers and hurled up sailboats mere yards from condo lobbies.

High tide or low tide, the next hurricane season officially starts on June 1.