Accessibility links
Murder Is Minimal In Spooky 'Sabrina' Graphic novelist Nick Drnaso's new book chronicles the aftermath of a murder in tightly-controlled, almost miserly panels that still manage to convey the horror of a senseless killing. 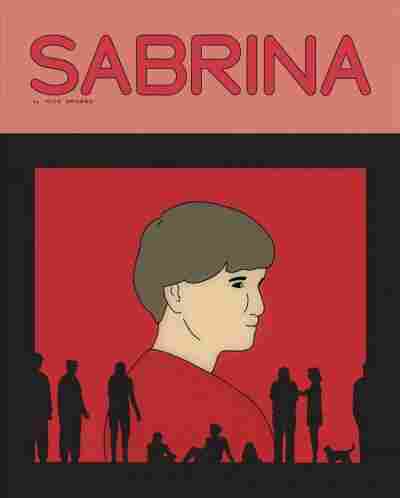 In Sabrina, his follow-up to 2016's gangbusters debut Beverly, graphic novelist Nick Drnaso includes a couple of illustrations that define the boundaries of his emotional and artistic territory. One's at the front, and one's at the rear.

The book's frontispiece perfectly encapsulates Drnaso's Spartan way with a line — a tightly controlled, even miserly approach to composition that seems inspired by how-to manuals or emergency diagrams. It's a full-page picture of a woman holding up one hand as if to rebuff a phone camera or, perhaps, ward off some sinister perpetrator — there's no knowing which. That's because, while it sometimes seems like Drnaso's characters don't show any emotion, this woman actually expresses too many feelings. Is she laughing, or grimacing in pain? We'll never know the answer, although we'll discover soon enough that sometime after this moment was captured, the woman — Sabrina — was brutally murdered.

But it's not Sabrina's death that prompts Drnaso to loosen the iron control with which he doles out handfuls of lines on each page. (No need: this maestro of minimalism manages to convey the horror of senseless murder with nothing but a lumpy sheet and motionless red water in a bathtub.) When he does loosen up, it's on the back cover, and for no reason whatsoever. Here, Drnaso signs off with a thoroughly unexpected flourish, filling the space with pastel-hued flowers and rich foliage. It's as if the book's themes — of death, isolation, purposelessness and fear — have finally worn him out, so that he feels driven to sketch something pretty for succor.

Or maybe the flowery kicker is merely an ironic gesture, an abstraction of the sense of plenitude that all the characters seek. Either is possible in a book like Sabrina. Sabrina herself hardly figures in the story. Drnaso's tale of the aftermath of her murder is told largely from the perspective of a peripheral figure: Calvin, a lonely military programmer who lends his spare room to Teddy, the dead woman's grieving boyfriend. "I'm sorry, I don't really keep food in the house," Calvin says, ushering his shell-shocked guest through a bare-bones condo. It's the kind of place Drnaso excels at drawing. The empty walls, vertical blinds and vaguely contemporary furniture come together in a symphony of alienation. It's only temporary, Calvin insists, until he can join his wife and daughter in Florida — but his plan to move there turns out to be as empty as his refrigerator.

Emptiness demands to be filled, and the two men have different, equally fruitless strategies for filling it. Calvin plays online first-person-shooter games with his coworkers and conducts awkward video chats with his bored daughter. Teddy, after a period of doing nothing whatsoever, starts listening to a conspiracy-theorist radio show. As he becomes more invested in the show, the host's hysterical fantasies — echoed by thousands of Internet posters — grow to encompass Sabrina's murder and endanger both men.

... this maestro of minimalism manages to convey the horror of senseless murder with nothing but a lumpy sheet and motionless red water in a bathtub.

Throughout, Drnaso maintains a fine balance between mocking Calvin and empathizing with him — though he leans toward the former. When Calvin takes Teddy out (to a featureless family-style restaurant), Teddy broods. "I am so angry at everybody," Teddy says, head in his hand. "I didn't ask for this situation, man. She didn't do anything to deserve this s***." "No, of course not," Calvin replies. "A lot of people are able to turn their grief into something positive. Maybe you're destined for some kind of job in law enforcement."

Calvin's an absurdity — a stereotype of a clueless, lonely man — but he becomes interesting in spite of himself. Surrounded as he is by Drnaso's rigorously generic environments, it's only natural that he doesn't know how to find what his life is lacking. Teddy isn't as well-realized; he shows up without a story and never really fills in the blanks.

But Sabrina is far more than just a character study. As it becomes more suspenseful it acquires creepy momentum. By the end it's hard to decide what's scarier: an army of anonymous weirdos looking for Sabrina's "real" killer, or an unfillable void at the center of a life.