Accessibility links
20 Years Ago, Oregon School Shooting Ended A Bloody Season A year before Columbine, a streak of school shootings had America debating whether they were a blip or a trend. The last fatal mass shooting of the 1998 school year was in Springfield, Ore. 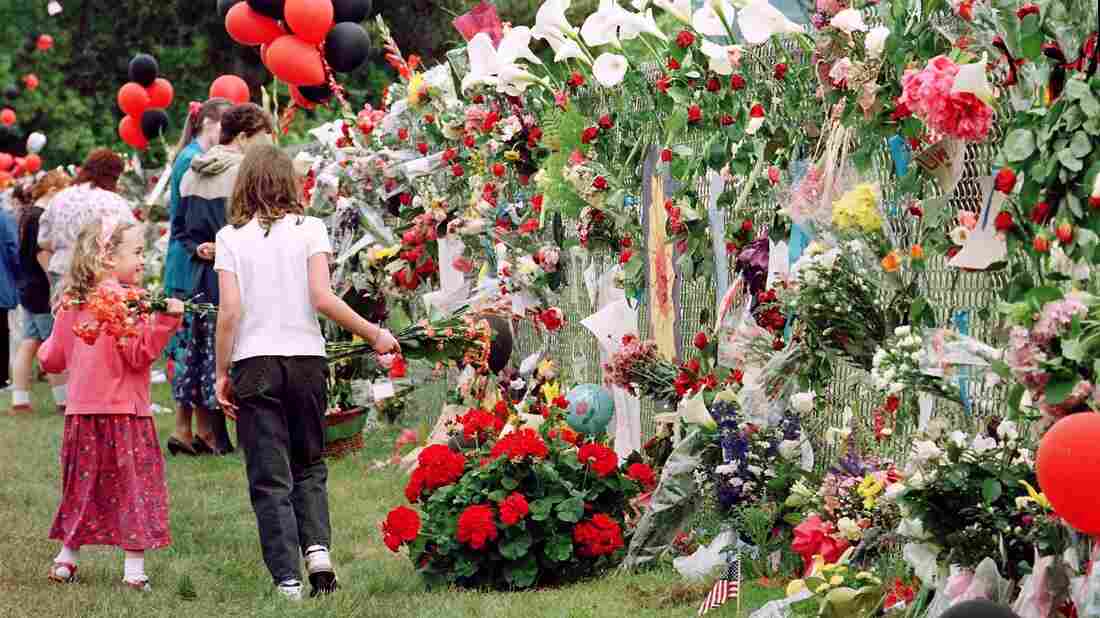 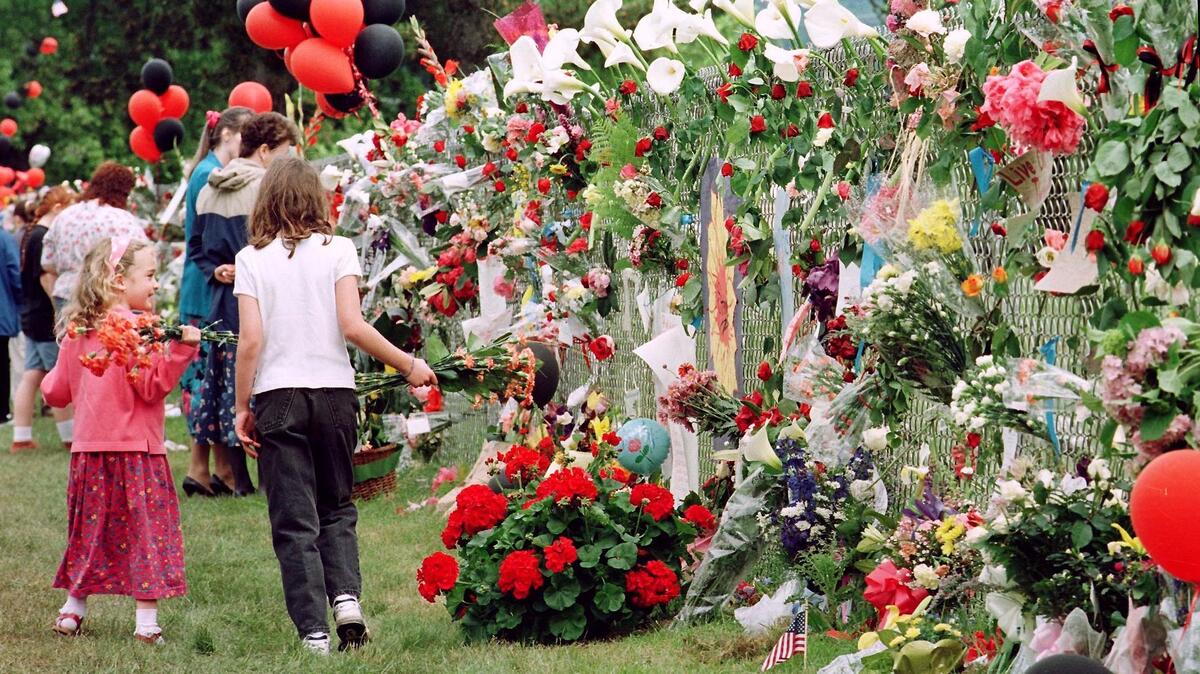 Two girls holding flowers walk along the wall of Thurston High School, serving as a temporary memorial, two days after the shooting.

Almost a year before the shooting at Columbine High School, a teenage boy wearing a trench coat walked into the Thurston High School cafeteria in Springfield, Ore. and began shooting at his fellow students.

The shooter that day, May 21, 1998, was 15-year-old Kipland Kinkel. He was armed with more than 1,000 rounds of ammunition, along with two pistols when he started firing his father's Ruger .22 caliber rifle.

Kinkel killed two students at Thurston and wounded 25 others. Later, police found Kinkel's parents' dead at home. He had shot them as well.

At the time, the string of shootings seemed a shocking anomaly. But that last shooting of the year at Thurston High, with its double-digit injuries, lent dark clarity to any question about whether America was facing something more persistent.

The day of the shooting

Jolene Leu was in the cafeteria that morning with friends when Kinkel started shooting.

"It was right before the bell to go to class," Leu, a junior at the time, recalled during an interview at a park just across the street from the high school. "Pretty much the entire table around me was shot."

Leu says she remembers feeling frantic. She was sitting next to her boyfriend at the time, who was shot." 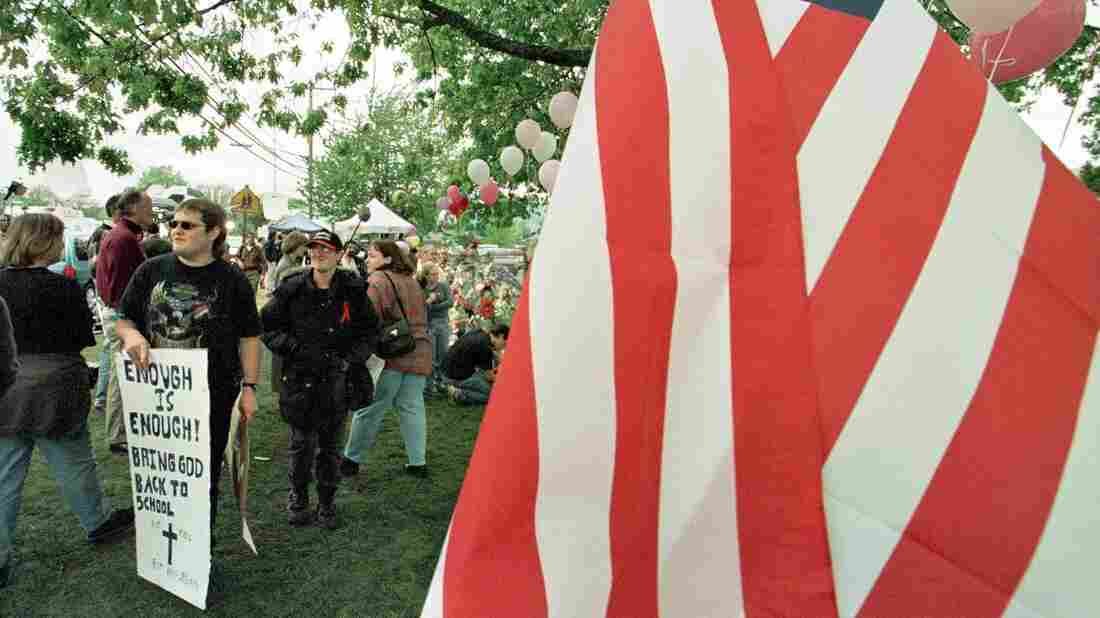 Residents of Springfield, Ore., gather near the fence of Thurston High School the day after the May 21 shooting, holding signs including one that reads "Enough is enough. Bring God back to school." Hector Mata/AFP/Getty Images hide caption 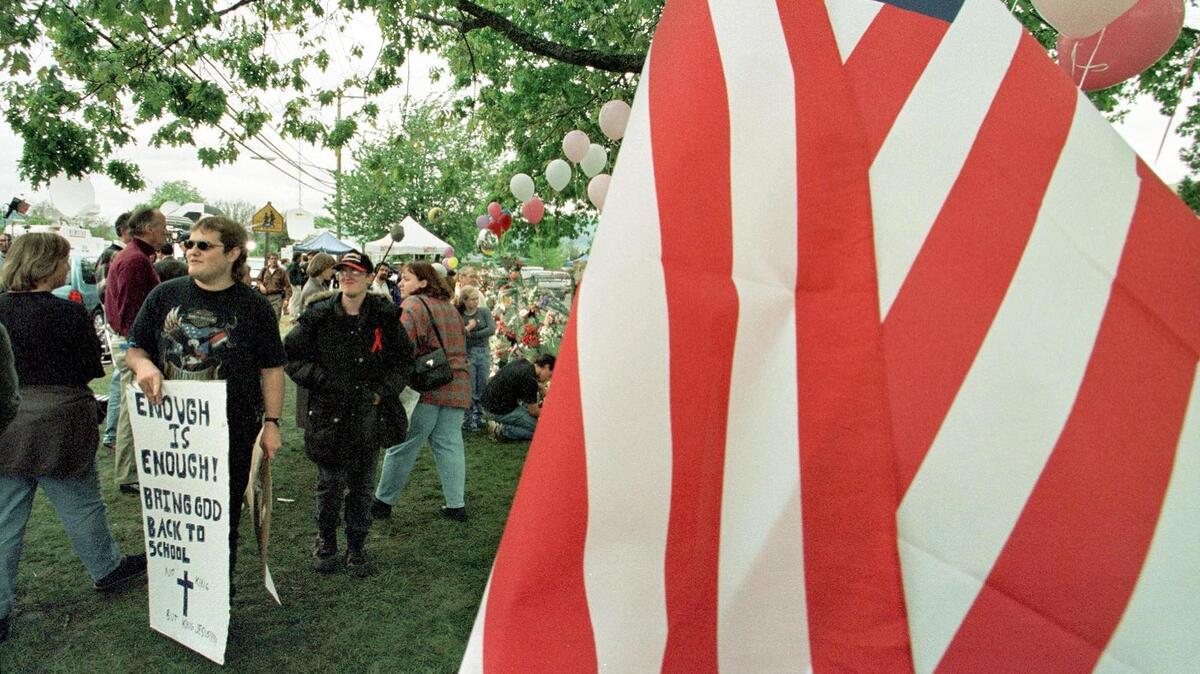 Residents of Springfield, Ore., gather near the fence of Thurston High School the day after the May 21 shooting, holding signs including one that reads "Enough is enough. Bring God back to school."

He had gotten shot in the side and it had come out his stomach," she says. "If I had been just a couple of inches closer it could've been my back and stomach, or worse. He shared a bullet with another friend. His bullet went through him and then got her in the leg under the table."

Both friends lived; their wounds made them part of the largest injury count in a school shooting for years.

Even now, Leu feels a sense of panic and guilt when she talks about that morning 20 years ago.

"I don't consider myself a survivor," she says. "I usually reserve that term for the ones that were actually shot. It's kind of hard for me to associate myself as a survivor because I don't have the physical scars that everybody else does. So I'm a witness to the tragedy."

Standing outside Thurston High, she points to where rows of television news trucks lined the street 20 years ago. Flowers and signs of support filled the fence that borders the school grounds. She says despite the shooting, she loved her high school years.

Last fall, her daughter enrolled as a freshman at Thurston.

"It was hard because they do all of the registration and team sign ups and everything in the cafeteria. And it hadn't changed much," she says. "So having to go in there to sign her up for a class was tough and unnerving. I was watching every door."

Although mass school shootings have persisted and this year has seen a spike in casualties, the late 1990s were notably bloody years followed by a downward trend.

Larry Bentz, the Thurston High Principal in 1998, was headed to a meeting at the district office when the shooting happened. He immediately drove to the school when he heard the news.

"(I) slowly recognized the magnitude of the disaster because I started counting the ambulances passing me heading into town," Bentz says.

At the time, the idea of a troubled young man bringing guns from home and firing them at school was something people were starting to voice worry about. Even so, to Bentz, Kinkel wasn't that guy.

"He was relatively popular," Bentz says. "His parents were popular people. But what we all did not know was that they all had a very dark family secret around his mental illness and the impact that it had had on their lives."

Kinkel was diagnosed with paranoid schizophrenia. He later pleaded guilty to the shootings and was sentenced to nearly 112 years in prison, where he remains today.

"He's a smart guy, he's got a high I.Q.," says Dennis Balske, one of Kinkel's attorneys. "But when he wasn't medicated, which he wasn't back then, his thinking was anything but normal. By definition his illness caused him to think in a way that led him only in one direction."

Kinkel is working to get a new trial that could allow him to leave his Oregon prison cell and go to the state's mental hospital. After the U.S. Supreme Court decided in 2012 that juveniles could not be issued life sentences, Kinkel's legal team appealed on those grounds—an appeal he lost this month.

"Everybody, I think, thinks he is some kind of a monster, when in fact he was a severely mentally ill youngster," Balske says.

Echoes of a dark day 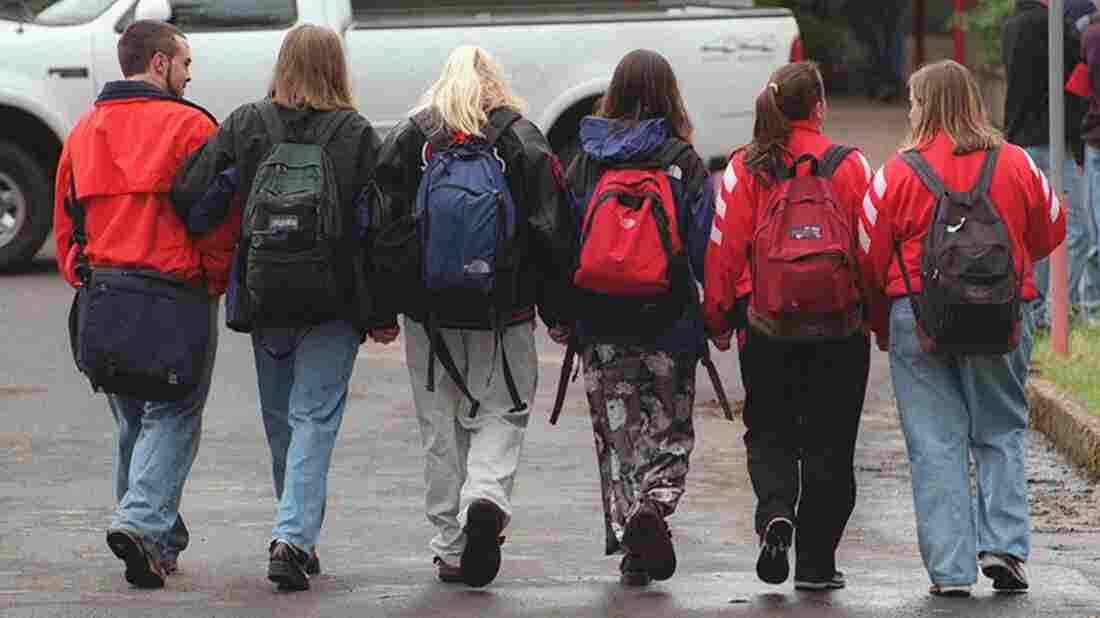 Students walk hand-in-hand to Thurston High School in Springfield, Ore. on May 26, 1998, the first day of classes after the May 21 shooting. Don Ryan/AP hide caption 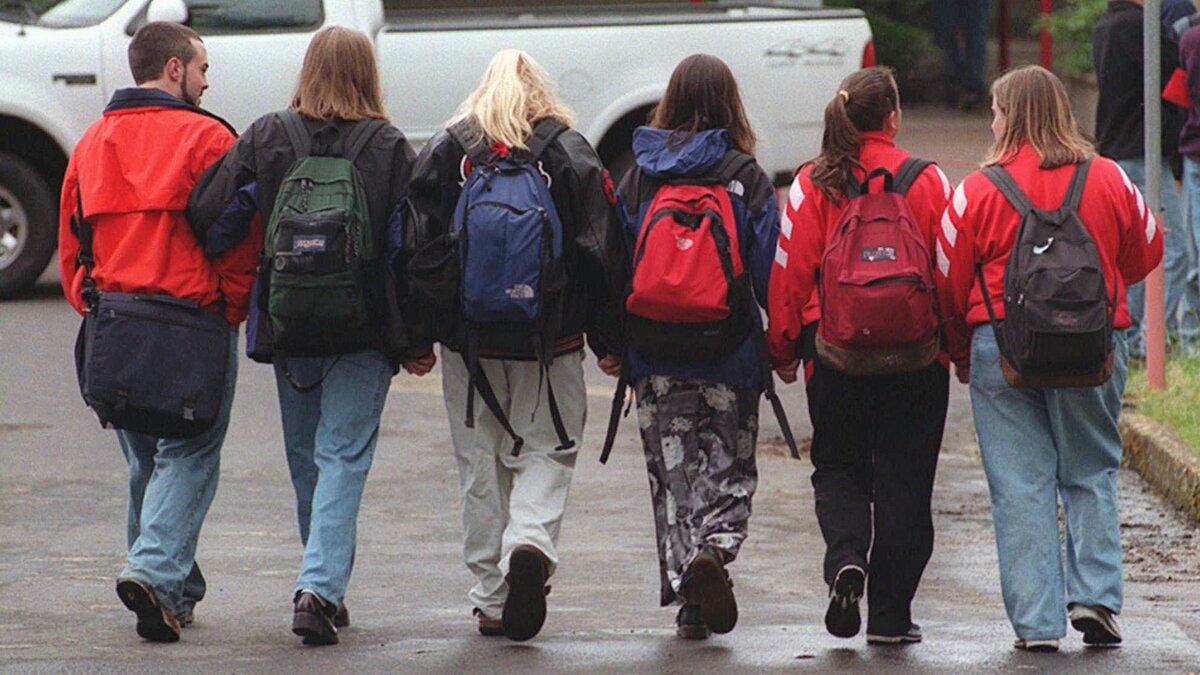 Students walk hand-in-hand to Thurston High School in Springfield, Ore. on May 26, 1998, the first day of classes after the May 21 shooting.

Bentz has the dubious distinction of having led two schools through shootings and their aftermaths. In 2007 he was principal of an alternative high school in suburban Portland when the building was shot up by a student. No one was killed but a few were injured by broken glass.

"It wasn't until later that evening that the adrenaline sagged and then you're thinking, 'oh my God, twice in a career,'" he says.

Less than a year after the shooting at Thurston High, 12 students and one teacher were killed at Columbine High School in Littleton, Colo. As with Springfield, mass shootings in Littleton, in Newtown, Conn., in Parkland Fla. and most recently in Santa Fe, Texas have given these towns an unwanted spot on the map. 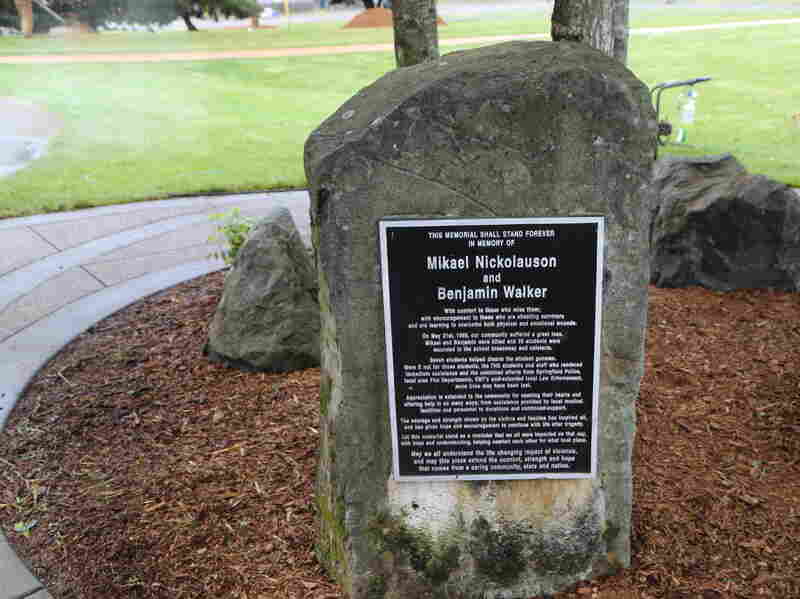 A memorial to students killed in the Thurston High School shooting on May 21, 1998. Conrad Wilson/OPB hide caption 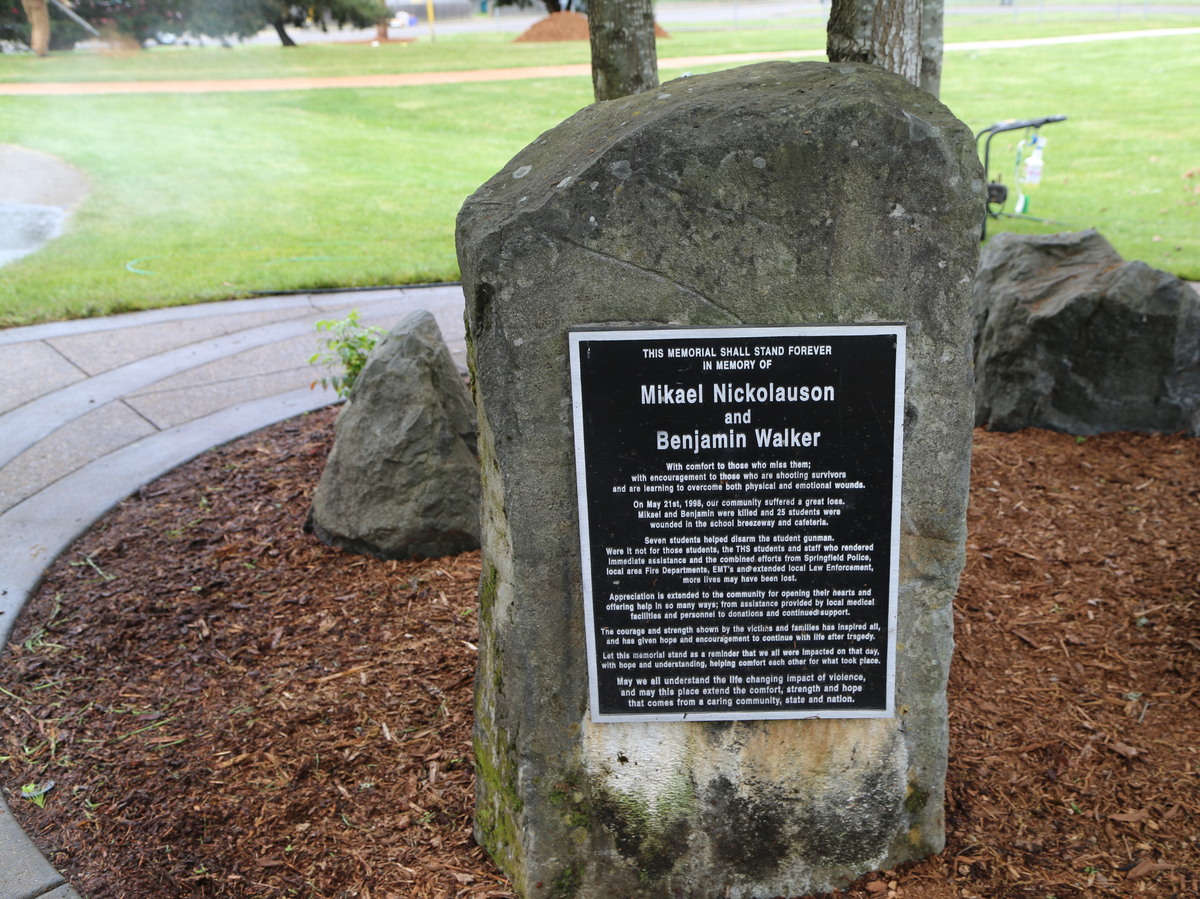 A memorial to students killed in the Thurston High School shooting on May 21, 1998.

Bentz says he doesn't have any advice for preventing school shootings, but over the years, he says, he's tried to help people respond to them "in order to minimize the pain."

Twenty years later, he says he'll remember the shooting at Thurston the same way he does every year.

"By myself," Bentz says. "I sit and I think and remember the smell of the blood in the cafeteria at midnight. And then I turn around and remember those kids who came back to that school the next week and who fought their way towards as normal of life as they could hope to have."