Accessibility links
Stone Rejects What He Calls Scheme To Silence Him, Amid Amid Lawsuits And Circling Feds Self-described "dirty trickster" Roger Stone says that he is ready for an indictment but that congressional and Justice Department investigators won't find any wrongdoing. 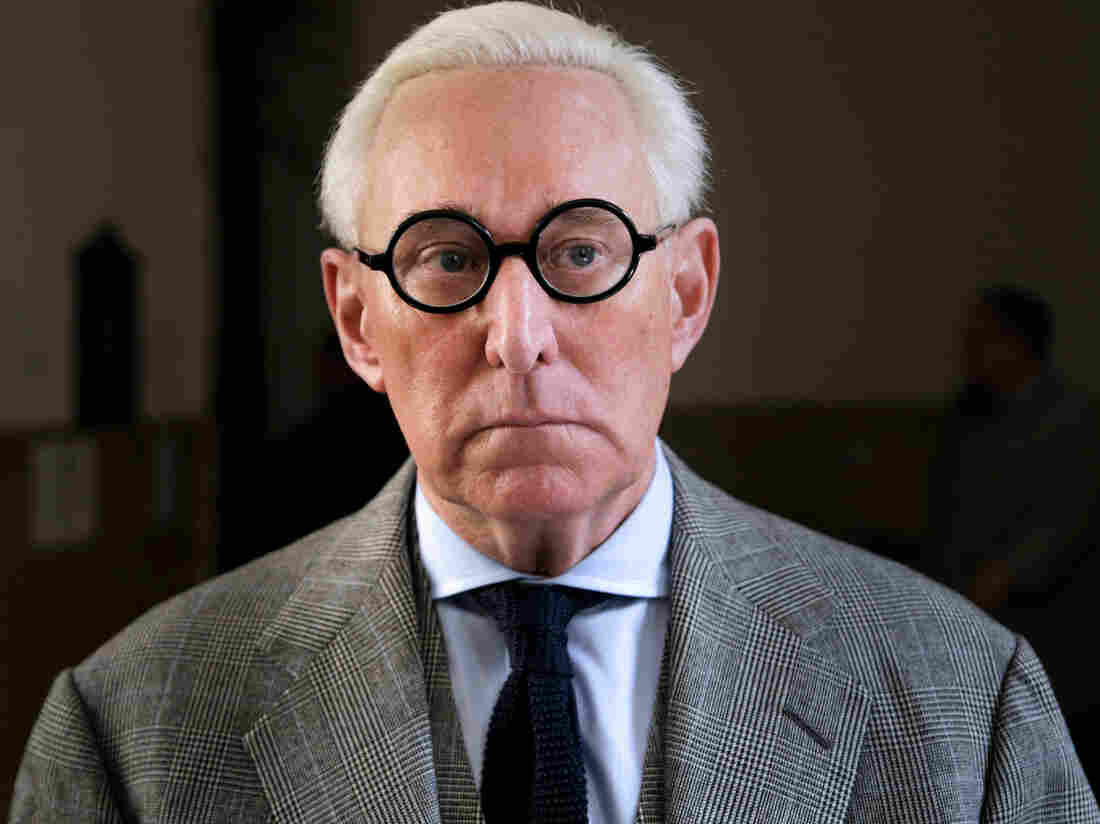 Roger Stone says that he is prepared for a Justice Department indictment if one appears but that investigators ultimately will find that he has done nothing wrong. Seth Wenig/AP hide caption 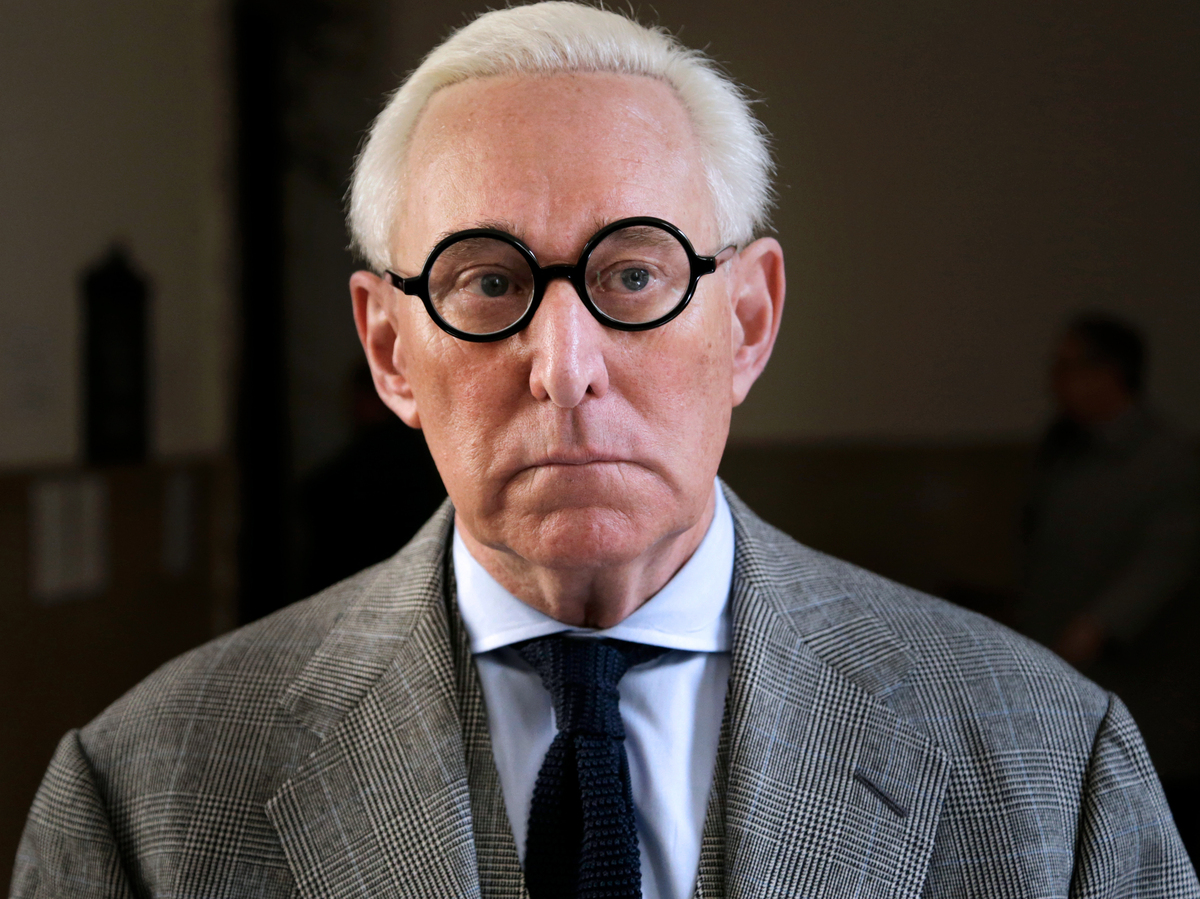 Roger Stone says that he is prepared for a Justice Department indictment if one appears but that investigators ultimately will find that he has done nothing wrong.

The net appears to be closing in on Roger Stone.

The outspoken, self-described "dirty trickster" and longtime confidant of President Trump is facing heat from congressional investigators, as well as a possible indictment from the Justice Department — or so he suspects.

Stone also faces lawsuits from a left-leaning government watchdog group and the Democratic National Committee — tactics he describes as "lawfare" meant to drain his finances. But the ageless political operator says there is nothing at the bottom of all this.

"They're following a fake news narrative, which continues to repeat incorrectly that I had advance knowledge of the content source or exact timing of the WikiLeaks disclosures," Stone told NPR. "If you read that enough times in the media, you might begin to believe it. Unfortunately, there is no evidence or proof that that is the case because it is false."

Stone said on Twitter on Aug. 21, 2016, that Hillary Clinton's campaign chairman, John Podesta, would soon have "his time in the barrel;" later WikiLeaks embarrassed Podesta by releasing his emails, which had been stolen by Russian hackers. Stone says his tweet wasn't a reference to the emails.

So the special counsel's office just wants to silence Stone, he said — but it's not doing a very good job.

Stone is reaching out to reporters daily, appearing on news shows and promoting a new book, Stone's Rules, about his rules for life as mentioned in a Netflix documentary about him called Get Me Roger Stone.

He is also raising money for his legal defense, hosting a show five days a week on the conspiracy-minded website InfoWars and writing a regular political column on his personal website.

But if special counsel Robert Mueller's investigation hasn't quieted Stone, it has disrupted his network. Mueller's office has interviewed at least five of Stone's associates, though not yet Stone himself, and the acolytes now say they're keeping their distance.

"I'm not going to talk to Roger until this investigation is over because I could be called in once again to the grand jury," said Sam Nunberg, one longtime associate.

The investigation has created a financial strain on those who have worked with Stone, including former colleague Michael Caputo, who has been interviewed by the Senate intelligence committee and the special counsel's office.

"I have no reason to believe it's going to end anytime soon. It's already up to a $125,000 in expenses for us, and it's pretty intimidating stuff,"Caputo told NPR.

Stone's legal bills are even higher, and he projects that his legal costs will top $1 million once he is done with congressional investigations, the special counsel and the lawsuits. Even though Stone hasn't received a subpoena from Mueller's office or met with investigators, there are indications the feds are working their way to him.

"I think if you talk to any prosecutor, that's usually the way prosecutors work, whether they're investigating a mafia crime or a murder, or some other kind of injury," said Ted Malloch, an American academic and businessman who lives in the U.K. and has worked for Stone. "They collect evidence and then they get finally to the people they're centered on."

The interviews of people like Malloch are illuminating because they show just how deep the Mueller probe extends. Malloch claims he has met Stone only three times in his life, has known him only for a year and a half, and has only a tangential relationship with him.

All the same, he was stopped upon re-entry to the United States in Boston by the FBI.

"There were questions about a long list of people ... and one of those persons was Roger Stone," Malloch told NPR, including "whether I'd ever met [WikiLeaks founder] Julian Assange, which of course I haven't, whether I'd been to the Ecuadorean Embassy, which I have never been to."

Still, even as he is hounded by lawsuits and investigators, Stone says he is trying to cause as much trouble as he can for his opponents, including congressional investigators.

Asked why, Stone said: "Because I can."