Accessibility links
House GOP Leaders Promise To Take Up Immigration Legislation In June Over initial objections by House GOP leaders, the House is expected to take up immigration legislation next month that threatens to further divide the party in the middle of an election year. 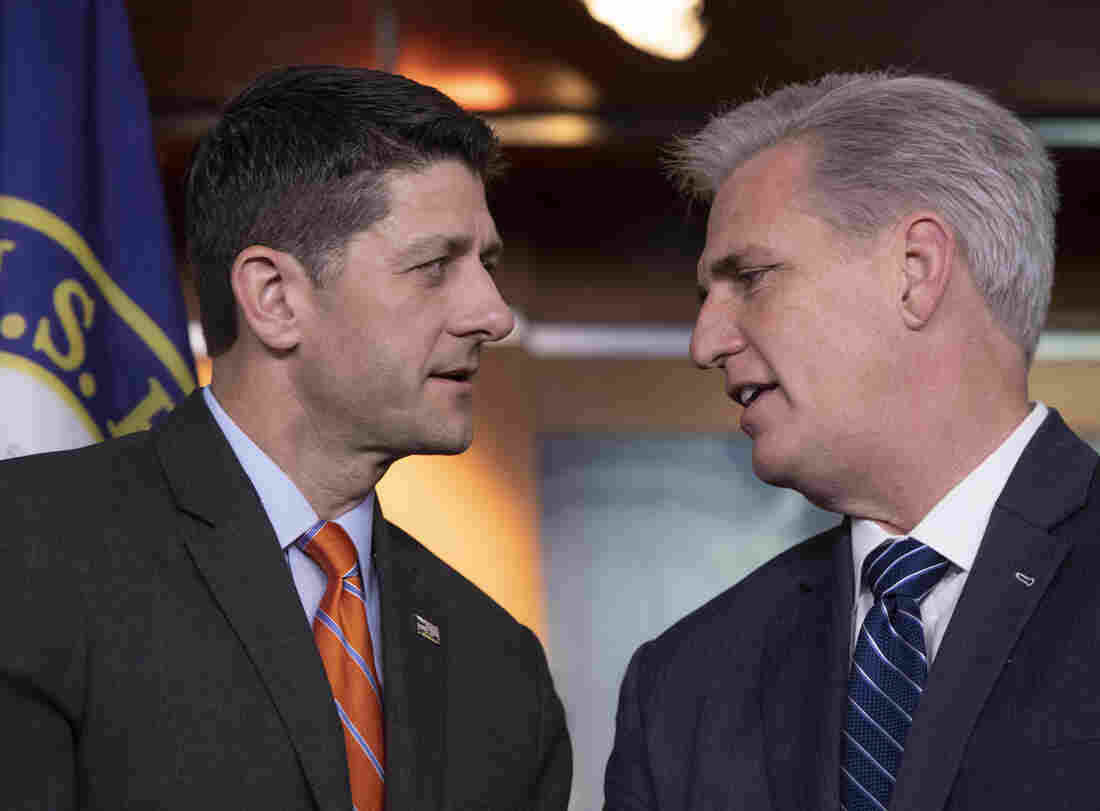 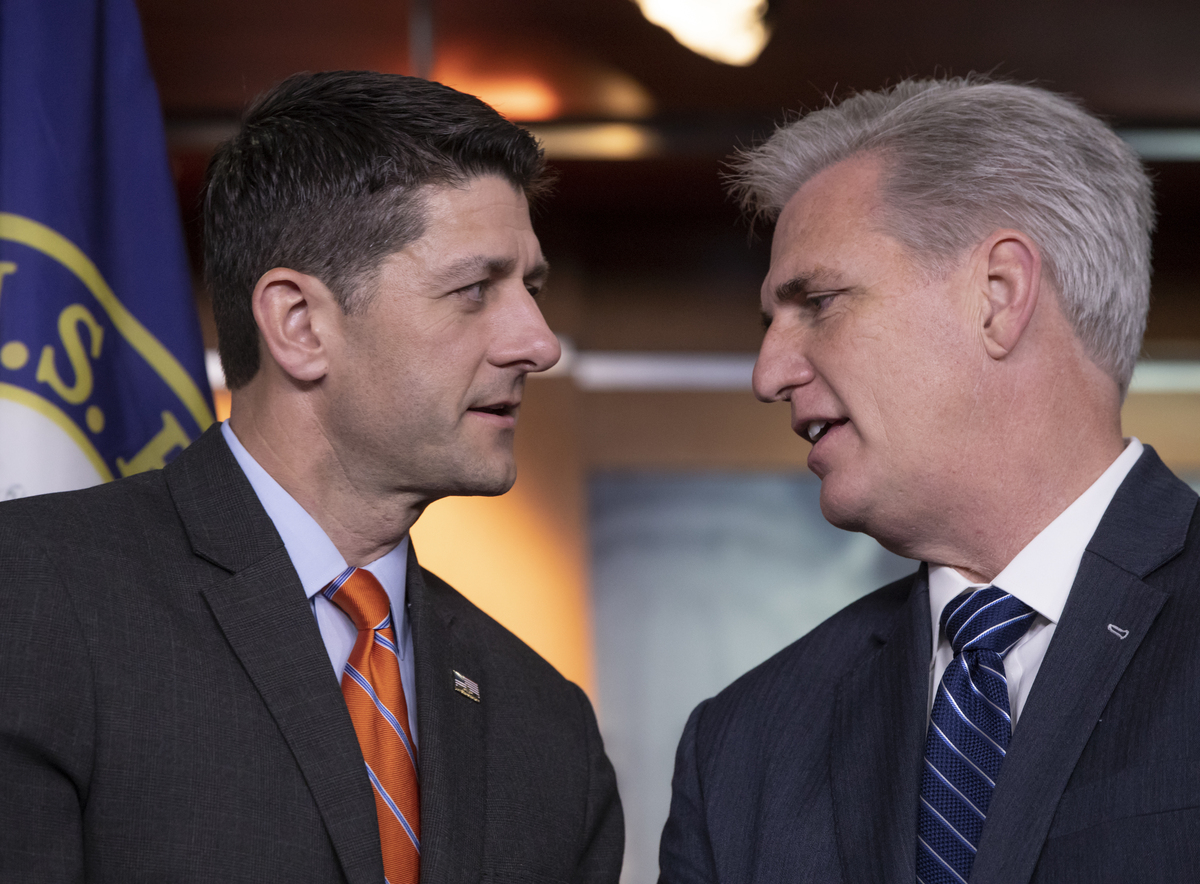 Speaker of the House Paul Ryan (left) confers with House Majority Leader Kevin McCarthy during a May 16 news conference.

House GOP leaders promised Republicans Tuesday they will bring up immigration legislation in June, even though that pledge threatens to divide the party and undermine the staying power of House Speaker Paul Ryan.

"What we're trying to do is find where the consensus sweet spot is," Ryan told reporters. "It's a very difficult issue. Immigration is an issue that has a lot of passionate positions, a lot of passionate thoughts, and our members come from various different perspectives."

Those passions took down unrelated farm legislation on Friday, when a bloc of House conservatives voted against a measure they support as leverage to force the House to vote on a hard-line immigration bill authored by Judiciary Committee Chairman Bob Goodlatte, R-Va. The farm bill is now on hold until a path forward on immigration is clear.

At the same time, a competing group of more moderate Republicans continues to advance a discharge petition — over the vocal opposition of the speaker — to force the House to vote on a competing series of immigration proposals. The goal is to ultimately pass a more centrist bill that Democrats can support.

"I think that it's important to have something that will get 60 votes in the Senate; that means getting Democrats on board. We will have Democrats on board in the House as well," said GOP Rep. Jeff Denham of California, one of the discharge petition advocates who said he expects more lawmakers to sign on to the effort Tuesday.

A discharge petition is a rarely used parliamentary tool that can force a vote on legislation if at least 218 lawmakers sign on to the maneuver. If successful, it requires a short waiting period and can only be voted on in the House on the second or fourth Monday in a month the chamber is in session. It rarely succeeds because, by design, it undercuts the will of the majority party, and Ryan reiterated Tuesday he opposes that effort.

"I can guarantee you a discharge petition will not make law, so what's the point?" the speaker said.

To a growing number of lawmakers, the point is that inaction on immigration is worse than taking tough votes in an election year. Retiring Pennsylvania GOP Rep. Ryan Costello signed the petition and said good policy isn't nullified just because it has support from Democrats.

Leaders say the moderates control far fewer than 200 votes, meaning Democrats would have to provide the vast majority of the votes to pass any bipartisan immigration bill.

But the petition is attracting support from more than just a small cadre of moderates. New York Republican Chris Collins was one of President Trump's earliest supporters in Congress and a backer of the conservative Goodlatte bill — and he signed the petition.

Collins told reporters he signed with the hope that Republicans will rally around Goodlatte, even if the evidence suggests they won't.

House Democratic Whip Steny Hoyer told reporters Tuesday he expects they will be able to do just that.

"Every Democrat, I think, is supportive of bringing a bill to the floor that would fix and protect DACA," Hoyer said. "I'm hoping that we can get sufficient signatures to discharge a rule which allows for four different alternatives and allows the speaker to offer anything he wants. How much more open and fair and transparent can you be?"

That may be enough for Republicans who are frustrated with months of inaction from GOP leaders.

"I'm tired of defending nothing. Even if nothing passes, you've got to put forth the effort so you know where people are. Now that may be an entirely ludicrous thought but that's where I'm at," said Rep. Mark Amodei, R-Nev., who has signed the discharge petition. "Guess what: I'm not trying to sow discontentment or mutiny — I've just frankly run out of patience with, 'Yeah, we'll get to it.' "

Costello also rejected the political argument that pushing an immigration debate could further threaten the GOP's grip on the House majority.

"I just don't agree with that because there's a lot of members in districts similar to mine, middle-of-the-road districts, where they're just looking for people to solve problems, and when you're willing to just have the courage to just go solve problems, voters reward you for that," Costello said.

House Republicans have never been able to come up with an immigration bill that can pass with GOP votes alone, although that is clearly the continued preference of conservatives like Freedom Caucus Chairman Mark Meadows, R-N.C., one of the Republicans who took down the farm bill last week.

While lawmakers, including Meadows, continue to voice support for Ryan's leadership, the immigration debate may test not only his ability to stay on as speaker through the election as he plans but also the ambitions of the Republicans who want to move up the leadership ladder when he is gone: Majority Leader Kevin McCarthy, R-Calif., and Majority Whip Steve Scalise, R-La.

Republican leadership elections are determined solely by sitting lawmakers, but outside conservative activists' groups are already calling for Ryan to step aside to let a new leadership team lead the House GOP through the elections.

Bozell signed a public letter along with more than 100 conservative leaders on Monday calling for leadership elections now and throwing their support behind Rep. Jim Jordan, R-Ohio, a prominent member of the House Freedom Caucus. Conservative activists are closely watching the upcoming immigration debate.

"I don't want to be overly dramatic here but it's not just consequential; I think it might be existential," he said.

It may be up to members to decide whether he stays in power, but Ryan said Tuesday that he believes most Republicans still support him.

"Obviously, I serve at the pleasure of the members," Ryan said. "Those are the people who drafted me into this job in the first place, but I think we all agree the best thing for us is to complete our agenda and not wedge into the middle of the completion of our agenda a divisive leadership election."

Rep. Tom Cole, R-Okla., said the conference stands behind Ryan, but he acknowledged that the immigration debate is one of the toughest issues members can confront in an election year.

"I think it's precarious for the conference, it's not for him. It's extremely difficult. It's hard to come together around and we have different opinions, but you just have to keep working the issue and get there," he said.

Cole, a former campaign chairman, said he thinks the political risk will be affected by whether Republicans allow a bill to pass without the support of a majority of Republican lawmakers.