Accessibility links
Stacey Abrams and 5 Takeaways From Primaries In Georgia, Texas And Kentucky Republicans and Democrats are heading in totally different directions, highlighted by Georgia's primaries for governor. And the progressive vs. establishment fight fizzled on the Democratic side. 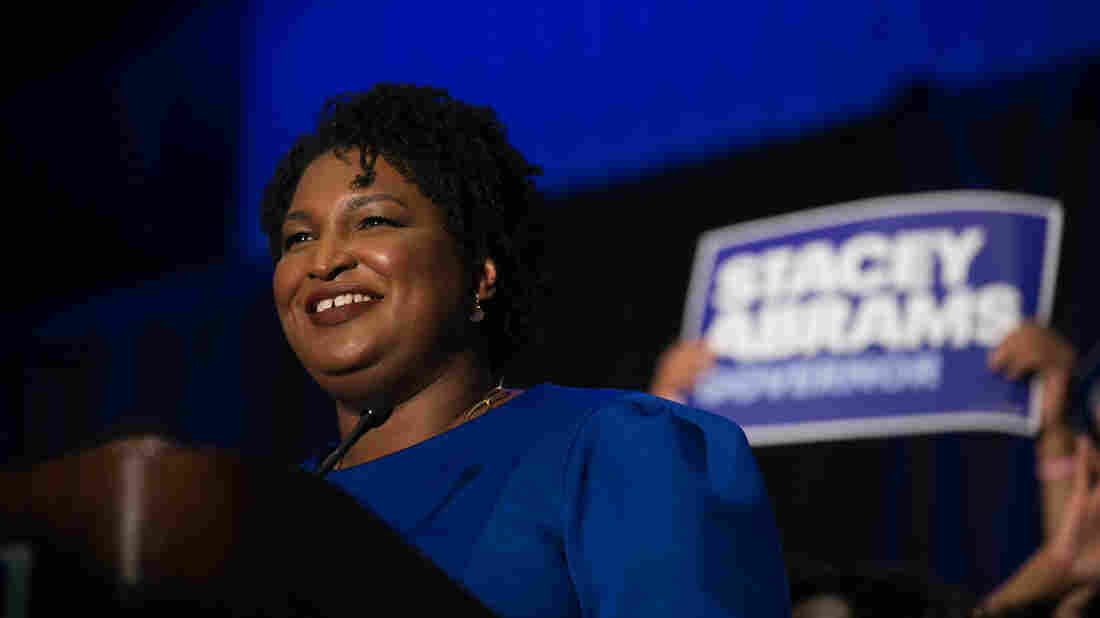 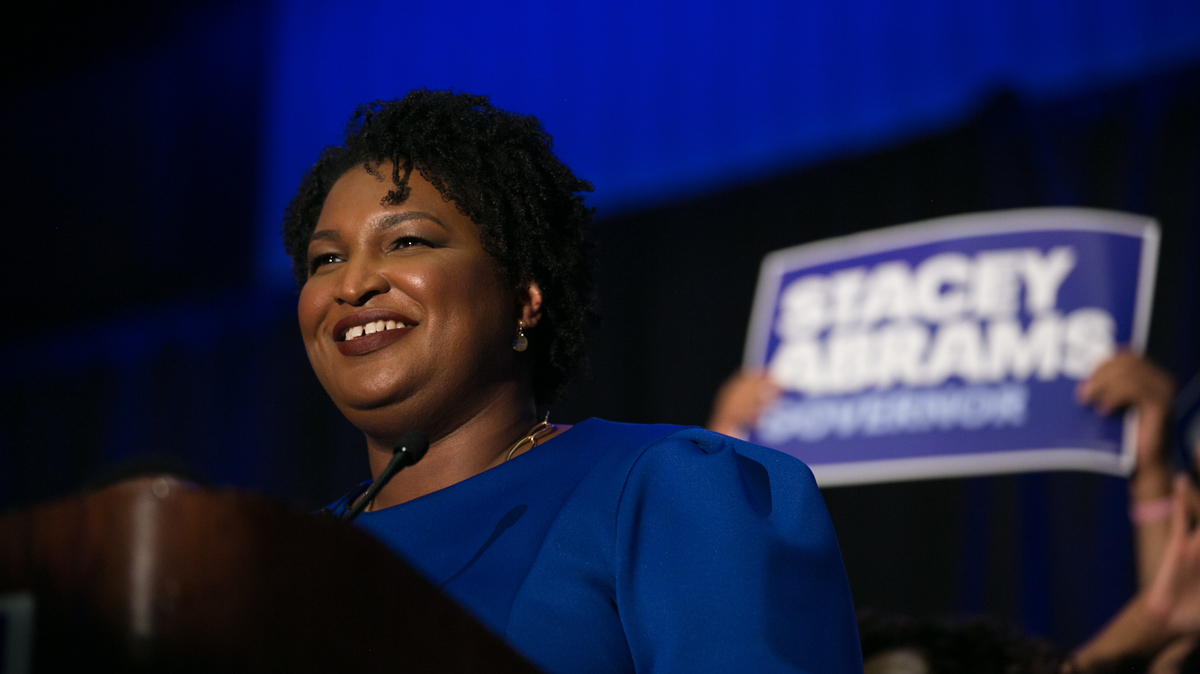 It was a big night Tuesday for Democratic women again, from Georgia to Kentucky to Texas. It was also a big night for change on the Democratic side, even if the internecine party fight between progressives and the establishment fizzled.

To sift through the results of Tuesday's primaries, here are five takeaways:

The headline of the evening was the blowout win by Stacey Abrams in the Georgia Democratic governor's race. Abrams, the former minority leader in the Georgia General Assembly, becomes the first black woman to win a major-party nomination for governor in any state.

The Republicans will have to wait another two months before they officially have a nominee. Lt. Gov. Casey Cagle and Secretary of State Brian Kemp are headed for a July 24 runoff. But the races on both sides Tuesday night highlight the very different directions the parties are headed.

What The Primaries In Arkansas, Georgia, Kentucky And Texas Mean For Democrats

What The Primaries In Arkansas, Georgia, Kentucky And Texas Mean For Democrats

In Georgia, a state that has quickly become very demographically diverse, Democrats decided to lean in and pick a candidate who unabashedly believes the Democratic Party has made a mistake in Georgia of continuously trying to win over Republicans, when she believes they need to turn out more minority voters. Democrats haven't won the governorship in Georgia in 20 years. Back then, the state was two-thirds white. Today, it's just over half, and the Democratic primary electorate is overwhelmingly nonwhite.

Abrams appealed directly to that. "We have the power to redraw the image of leadership so we can all see ourselves reflected in its face," she said in a Twitter graphic. (In the graphic, "ourselves reflected" was underlined, an unmistakable appeal to black Democrats.)

Georgia: The power is in our hands. Tomorrow (5/22), stand with me and vote for leadership that reflects our values. https://t.co/ibvTOolZIJ #TeamAbrams #gapol pic.twitter.com/1Ij551cgfd

Undoubtedly, black women have been the "backbone" of the Democratic Party, as Democratic National Committee Chairman Tom Perez has noted.

Let me be clear: We won in Alabama and Virginia because #BlackWomen led us to victory. Black women are the backbone of the Democratic Party, and we can’t take that for granted. Period.

But whether one can win statewide in Georgia is about to be tested. Not only have Democrats not won the state in 20 years, but more Republicans turned out Tuesday night for their primary than Democrats did.

Meanwhile, the GOP side reflects the very different world the Republican Party, led by President Trump, is in compared to Democrats. Cagle and Kemp have been in a primary dominated by the culture issues of guns and immigration.

Kemp, who finished second in the primary, got attention with ads that would normally be run by a fringe candidate. In one, he points a gun in the direction of a teenage boy who says he is interested in his daughter:

In another, he says he's using his pickup truck to round up immigrants in the U.S. illegally. "Yep. I just said that," Kemp declares from behind the wheel, before adding, "If you want a politically incorrect conservative, that's me."

2. In the battle of progressives versus the party establishment, the Democratic fight fizzled

In the key race everyone was watching in Texas, the 7th Congressional District, the question was whether progressive candidate Laura Moser could upend the party-favored candidate.

While Moser, whom the party tried to muscle out of the race early on, made it to the runoff, she was trounced in the end by lawyer Lizzie Fletcher, a first-time candidate. The party believes Fletcher gives it the best chance of taking out Republican incumbent John Culberson, who is sitting in a district Hillary Clinton won. The race is considered a toss-up by the Cook Political Report.

Democrats also got their preferred candidate in Texas' 23rd Congressional District, Gina Ortiz Jones, a former Air Force intelligence officer. She easily defeated Rick Treviño, a San Antonio high school teacher and progressive upstart. He was a Bernie Sanders delegate to the Democratic National Convention and not expected to make it to the runoff.

Jones will be taking on Will Hurd, the Republican incumbent, in a district Clinton won by 3 points. Hurd is a former CIA officer who has been one of the GOP's standout candidates to this point this cycle. Still, if Democrats hope to take back the House in a wave election, this has to be a top target.

If Democrats in Washington were biting their nails about Nebraska last week, after progressive Kara Eastman defeated a more moderate former congressman, they're feeling better about Texas after Tuesday's contests.

3. Democratic "year of the woman" continues

From Abrams to Fletcher to Ortiz Jones and on, Democratic women continue to rack up victories in the primaries.

Another good example of that Tuesday night was in Kentucky, where former fighter pilot Amy McGrath handily defeated Lexington Mayor Jim Gray in the 6th Congressional District. Gray had lots of name recognition and won this district in the Senate race against Rand Paul in 2016.

All of that had gotten the attention of Washington Democrats, and Gray was the early favorite in this primary in a district that has been rising on Democrats' House wish list. (GOP Rep. Andy Barr is the incumbent, and the Cook Political Report currently rates this district as Lean Republican. Trump won it by 15 points.)

McGrath's and Gray's positions are similar, but McGrath, an Iraq and Afghanistan veteran, gained a lot of national attention from liberal groups as some of her early ads went viral. Her primary win may be indicative of a changing face of Democratic Party politics.

In her ads, she highlighted being a fighter pilot ...

Seeing McGrath's momentum, Gray made a last-ditch effort to derail her, highlighting that she didn't grow up in the district, that during her military career she didn't live in Kentucky, and that she moved back to Kentucky just last year from Maryland:

It was a somewhat clumsy attempt, but residency issues have had salience in many recent races. You can bet Republicans will be testing the best way to make that argument against McGrath.

A high school math teacher in Kentucky pulled off a once-thought-to-be-impossible upset in a state House race. Travis Brenda beat the state House majority floor leader, Jonathan Shell, who co-authored a controversial bill that changed the public pension system and caused a public backlash among teachers.

Brenda won by just 123 votes, but his improbable win was fueled by the anger of teachers, thousands of whom marched on the state Capitol. More than a dozen current and former teachers got on the ballot in various races across the state.

The thing to watch is whether this is the start of something broader. There have been teacher protests and strikes in multiple states, as Republican legislatures and governors have aimed at curbing teacher benefits and pay.

The president has gotten more popular over the past several months. The economy is doing well. The U.S. has backed away from a standoff with North Korea. As a result, Democrats' advantage has shrunk on the question of who Americans want in control of Congress.

Trump Warns Summit With North Korea May Not Happen On Schedule

Yet, at a Susan B. Anthony List gala, where anti-abortion rights activists gathered, Trump ran through his usual warnings that Republicans shouldn't be "complacent," but then said this:

"Your vote in 2018 is every bit important as your vote in 2016, although I'm not sure I really believe that, but you know. I don't know who the hell wrote that line."

He paused and continued over laughs, "But it's still important, remember."

“Your vote in 2018 is every bit as important as your vote in 2016 — although I’m not sure I really believe that,” Trump ad libs. “I don’t know who the hell wrote that line.” pic.twitter.com/tk6G7CfD4H

Sure, it's a self-promotional joke. But it's precisely the kind of thing the people in charge of trying to help Republicans hold onto control of Congress don't want the president to say.

It's a reminder that Trump is the ultimate wild card — and who knows what he might say or do between now and November.