Accessibility links
Philip Roth: 'You Begin Every Book As An Amateur' The influential novelist won almost every major literary award, but still found the writing process was full of discovery. "Each and every sentence is a revelation," he said. Roth died Tuesday at 85. 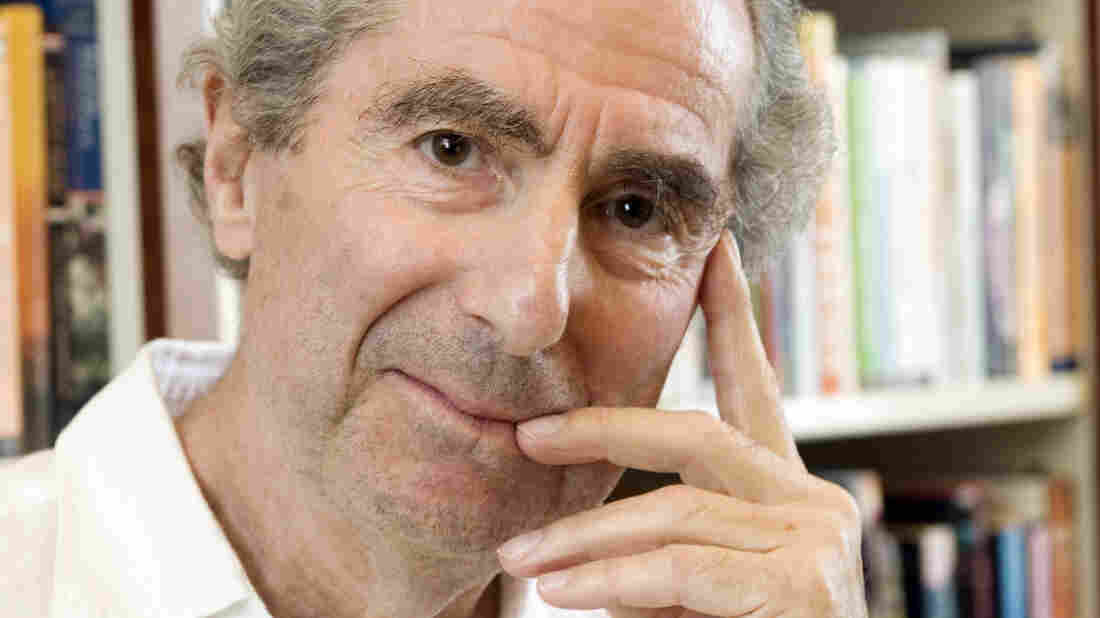 Philip Roth wrote more than two dozen books over six decades. In his later years, he wrote several short novels about the physical indignities of aging. He told Terry Gross in 2006 that he intended to write for as long as he could: "You just drop dead at the computer, and they carry you away," he said. Roth is shown above in 2008. Richard Drew/AP hide caption 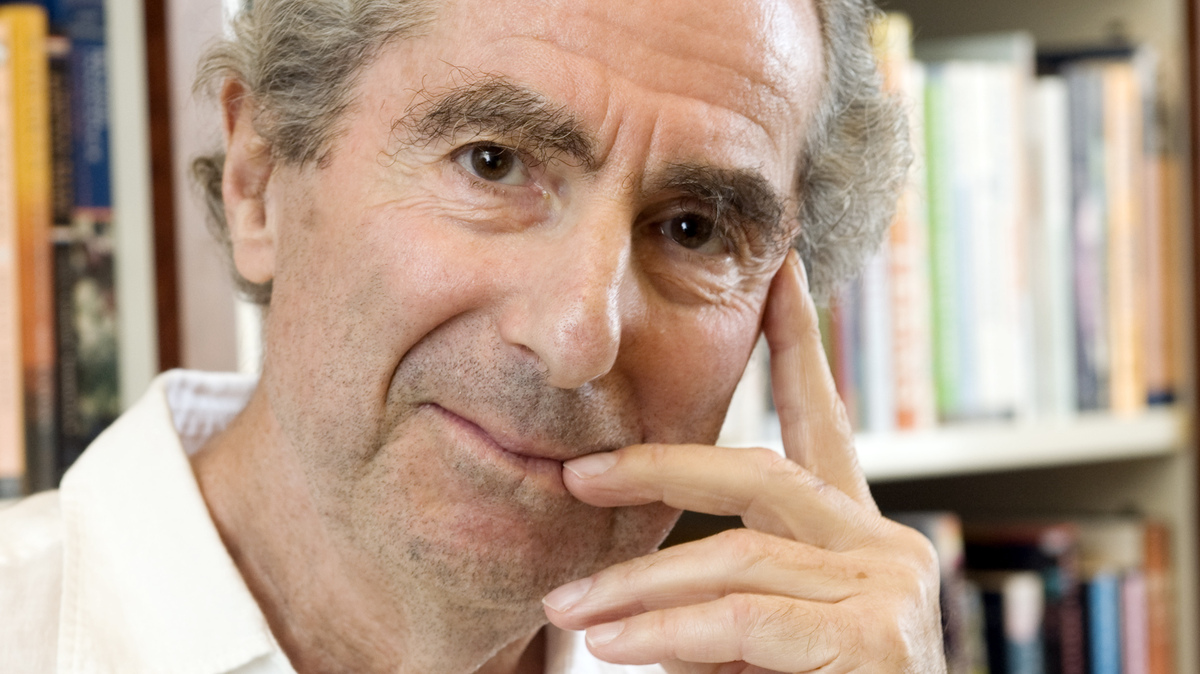 Philip Roth wrote more than two dozen books over six decades. In his later years, he wrote several short novels about the physical indignities of aging. He told Terry Gross in 2006 that he intended to write for as long as he could: "You just drop dead at the computer, and they carry you away," he said. Roth is shown above in 2008.

Novelist Philip Roth "discovered" his own books as he wrote them. "I don't know anything in the beginning, which makes it great fun to write ..." he told Fresh Air in 2006. "You begin every book as an amateur. ... Gradually, by writing sentence after sentence, the book, as it were, reveals itself to you. ... Each and every sentence is a revelation."

Roth died Tuesday at age 85. He first became known in the late 1950s and '60s for writing a new kind of story of Jewish identity. In books like Portnoy's Complaint and Goodbye, Columbus, he wrote comically about young Jewish men who were alienated from their culture and families. His 1997 novel American Pastoral won a Pulitzer Prize, and he was twice awarded the National Book Award for Fiction.

On growing up in a "Jewish village" in Newark, N.J.

I was born in '33, and so I guess by about '43 my eyes were open. ... The whole country was at war, and the mood of the country was determined totally by the war. And I felt that mood in our neighborhood, as everywhere else. ...

On the secularization of his generation and his parents' generation

It was a Jewish neighborhood, a Jewish grade school, a Jewish high school. Jews, Jews, Jews, Jews everywhere. ... But I never saw a Jew in a skullcap on the street in my life growing up. Someone asked me about that recently: Did I wear a skullcap as a kid? I said, "Outrageous. I never would have thought of such a thing, nor did anybody else in the neighborhood." So here was this 100 percent Jewish neighborhood, and I didn't know a single soul to wear a skullcap, which tells you a lot about the fierce secularization, the fierce Americanization of my generation and my parents' generation. 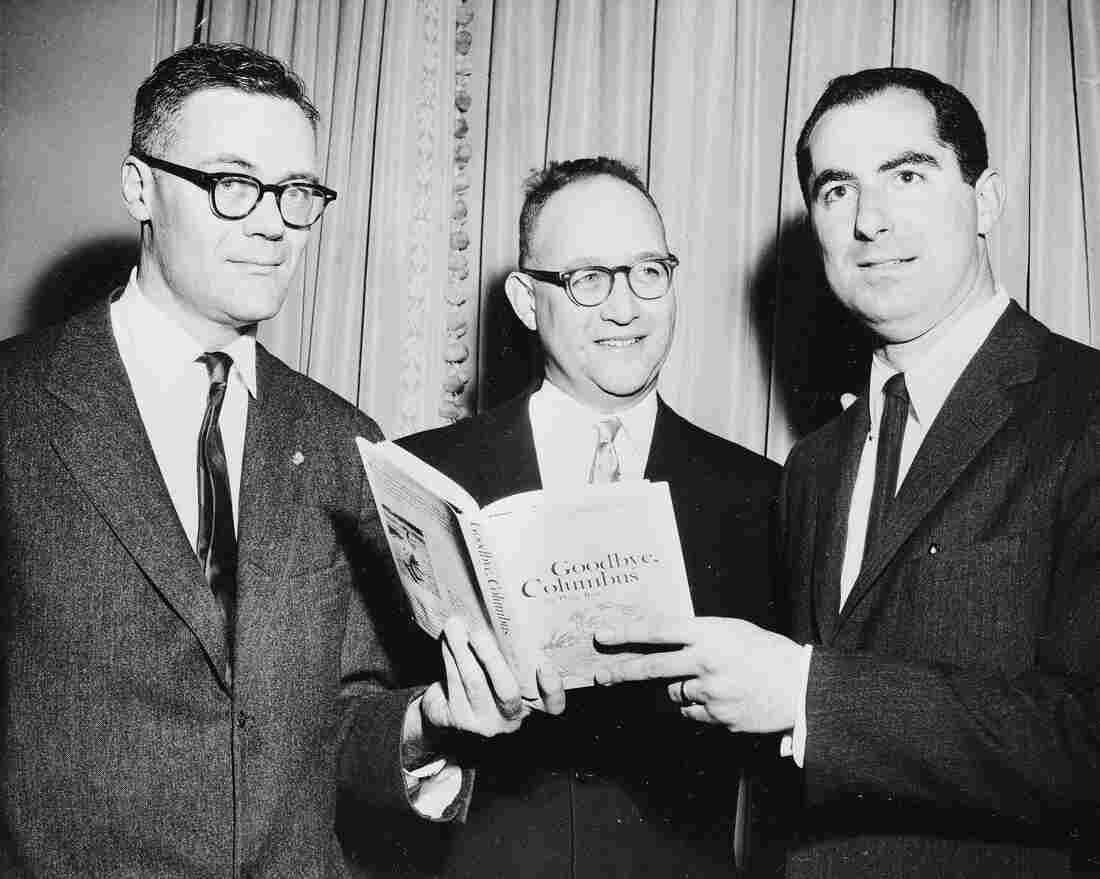 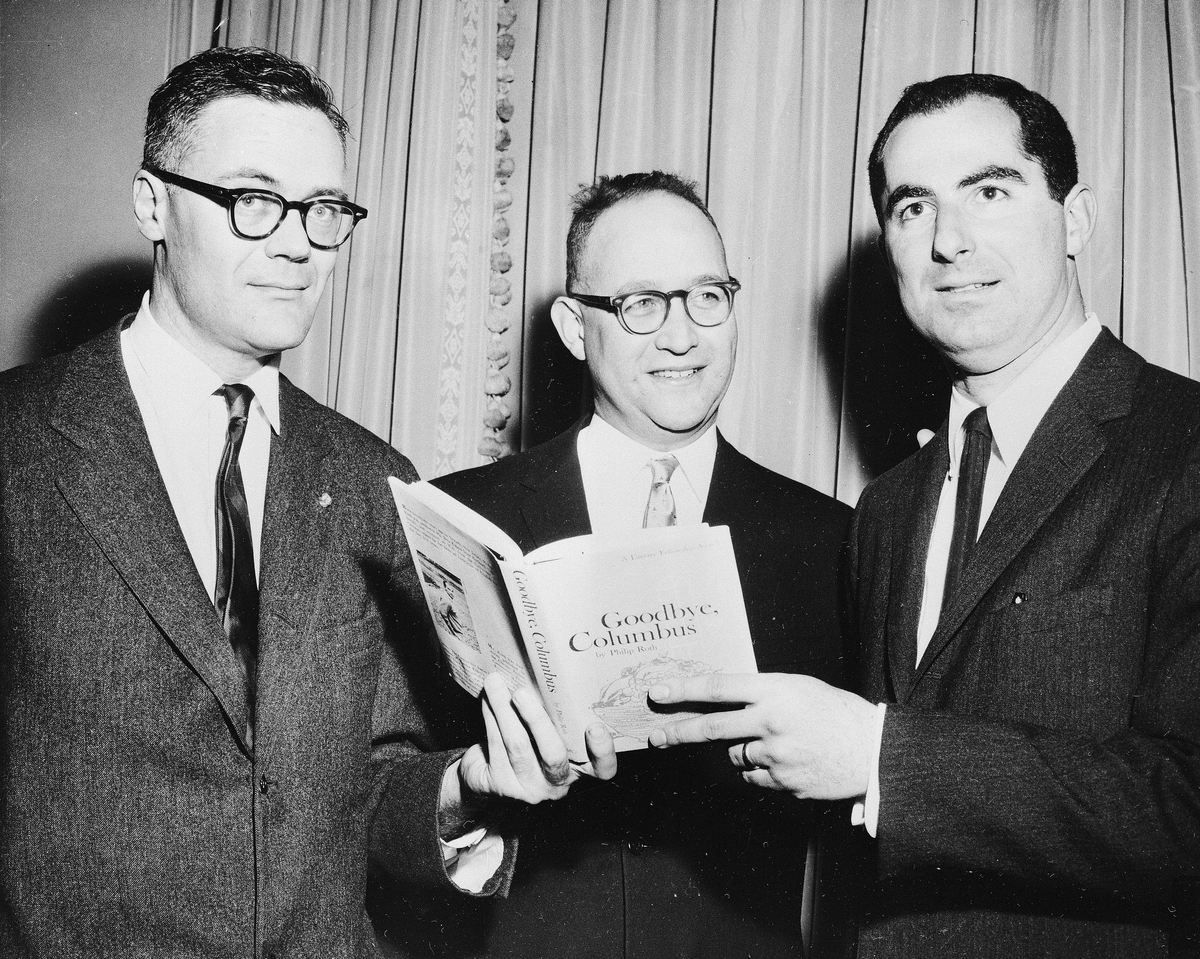 I was in the Public Information Office of Walter Reed Hospital in Washington. And my job was to go out into the wards and get information about soldiers newly arrived who were injured ... and then write a little press release for their hometown paper.

They had a lot of amputees at Walter Reed ... and so I went out on the wards, and I talked to these guys. It was sad, as you can imagine. This was just after the Korean War. ... I'd go down to PT with them — physical therapy — and watch them learning to walk on the parallel bars and so on. ... The pathos was overwhelming.

Polio Breaks Out In Newark In Roth's 'Nemesis'

On how he feels about his early works

I've forgotten those books. Truly. I mean, I know vaguely what they're about and I know vaguely the way they're written, but I haven't read them in — I don't know when — 30 years? ... They just seem very, very distant to me. ... Probably I wouldn't like them. ... I don't think I'm alone in that kind of reaction. I think many writers, when they read their apprentice work — which is what I consider this stuff to be — are made uncomfortable by how young they were. ...

The first four books ... Goodbye, Columbus ... Letting Go ... When She Was Good and Portnoy's Complaint, could have been written by four different people, I think. There's no consistent voice. ... This is not a bad thing, by the way. ... There's no consistent approach. There's no way in which I've mastered writing a novel. I hadn't mastered it. I was trying to figure out what a novel was, what a short story was. I rapidly gave up on short stories. I found that really I liked the bigger thing, the novel. But it's a search. 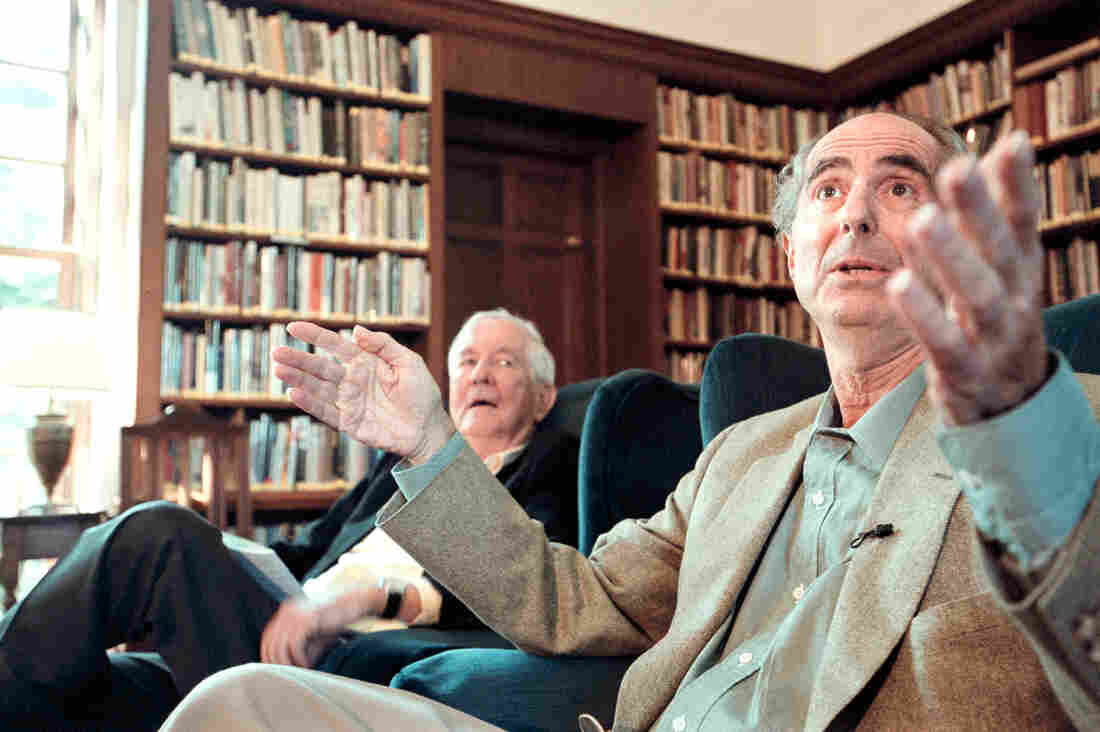 Roth answers questions after being awarded the 2001 Edward MacDowell Medal for his contribution to the arts. Gretchen Ertl/AP hide caption 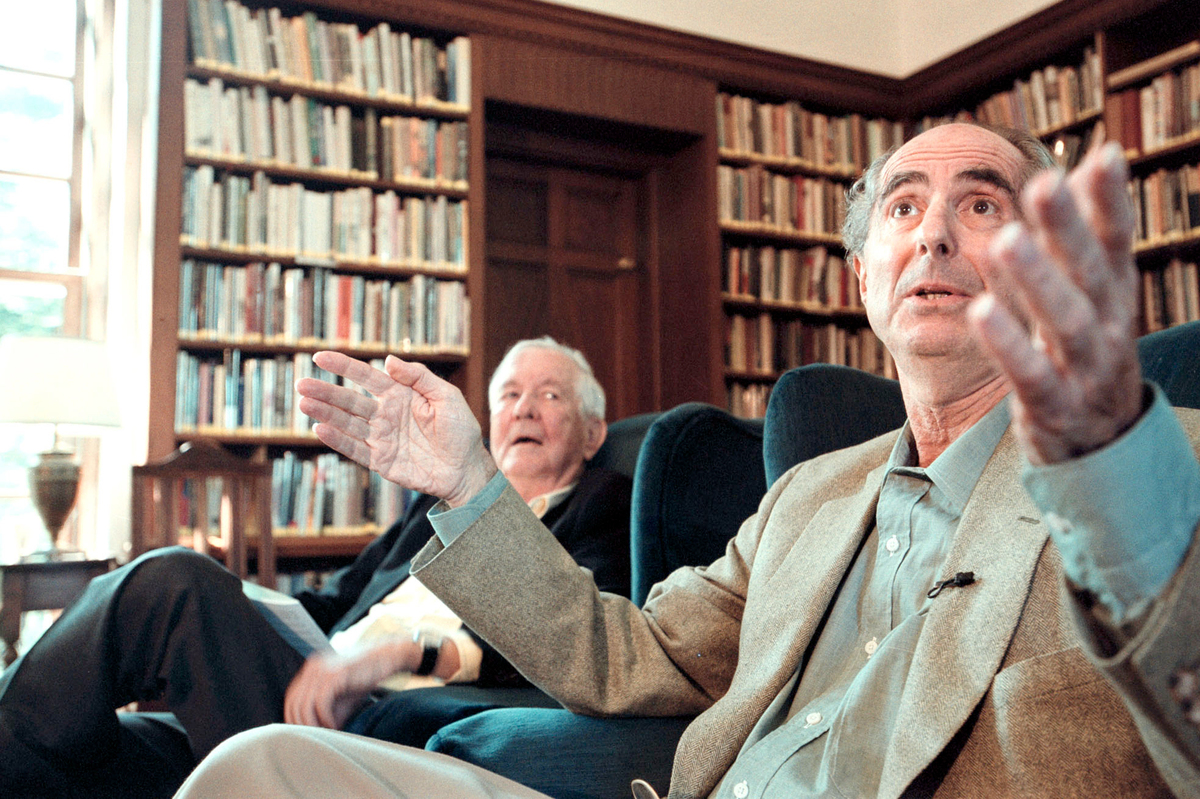 Roth answers questions after being awarded the 2001 Edward MacDowell Medal for his contribution to the arts.

On the origins of his 1969 novel Portnoy's Complaint, which is told as one long therapy session

In between 1960 and 1962, I was making a living by teaching in the Writers' Workshop in Iowa City, and I had among my students some Jewish students. And ... almost all of them at one point would write a story in which there was an overbearing mother and an ineffectual father and an angry daughter or son, depending upon the sex of the writer. And I saw this thing repeated over and over again, and I thought: I'm face-to-face with folklore. ... The backgrounds of these people all lead them to this legend. ...

In 1967, I had just finished a book called When She Was Good, which is, in every way, the antithesis of Portnoy's Complaint except for one thing: It's about a daughter's rage against her family. ... I think that set me up to write Portnoy's Complaint. And so I began by writing a short story which I called "A Jewish Patient Begins His Analysis." And I wrote it, and it was published in Esquire magazine. ... There was not so much forethought in my writing this book, nor did I know beforehand what the hell I was doing.

After I wrote that [short story], I thought, "Go ahead. You've found something there." What had I found? That in talking to the invisible analyst, or at least using that as the conceit, I had opened up my verbal floodgates. ... And not only that, but that the psychoanalytic session gave me permission to speak freely of sex.

On being inspired by writer Saul Bellow

I suspect that half a dozen of my colleagues of my generation, or a little younger ... had their eyes opened to literary freedom by Bellow. ... Just as a youngster growing up may admire ... some older kid because of his or her freedom. I think we all have had that experience. Likewise with a writer, you feel not just the freedom, but the energy and, needless to say, the genius. ... [Bellow] freed a whole generation of Jewish writers who came after him to write of the thing which was so powerful in their lives, which was their Americanness. 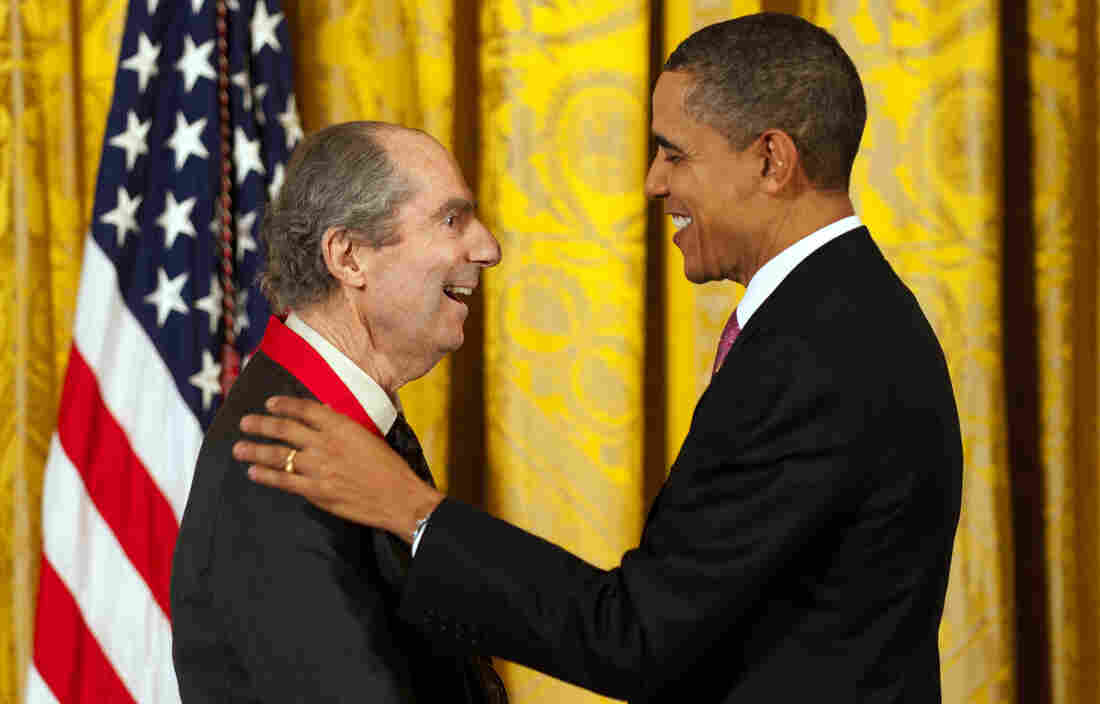 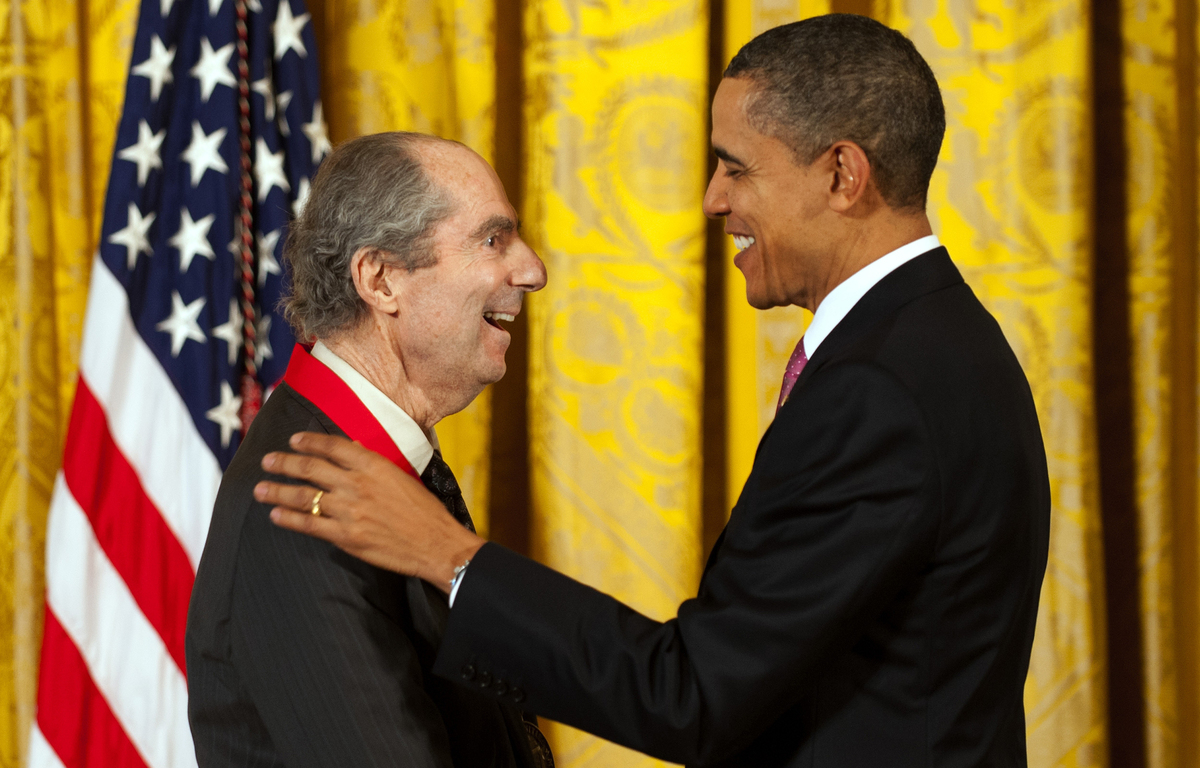 What you're trying to do is hook one sentence to the sentence before and the next one to that sentence. And as you do, you're building a house, you know ... The architect and the contractor, they know what the house is going to look like when it's done — and that's the big difference. I don't have any idea what it will look like when it's done. I don't have any idea whether it will even be done, because you don't know what you're doing when you're at work.

On visiting the graves of his mother and father

I do feel closer to — if not to the dead — to their memories when I'm there. I'm rather glad that my parents were buried in the ground in a box. ... It gives me a place to go. I don't believe they're present. I know they're dead. But somehow, the place has a significance. It focuses your thinking. It allows you to be alone and uninterrupted, and you're thinking about them and your past with them and who they were. I don't do it more than once a year, but I do do it regularly, and it does mean a great deal to me.

On the death of friends coming as a shock

The death of friends is a very, very difficult thing to come to grips with. ... When you reach your 60s and your 70s, then the winnowing out takes place. ... The actuality is that there's no rhyme nor reason to the dying. But in my thinking, friends never figured in it. Your friends are your friends for life, as it were. You're all in this thing together.

Nicole Cohen, Beth Novey and Molly Seavy-Nesper adapted these interviews for the Web.