Accessibility links
Trump Intensifies Push On What He Calls Improper Snooping With 'Spygate' Brand President Trump argues the story about the FBI investigating his campaign's potential conspiracy with Russia actually is a story about unlawful surveillance. 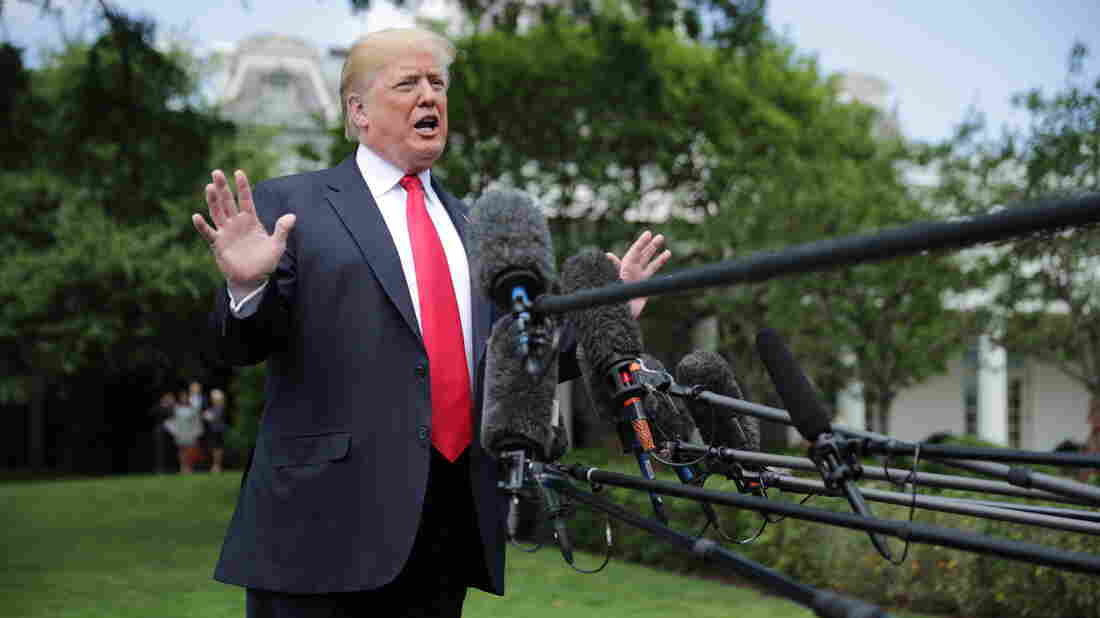 President Trump speaks to the media as he walks across the South Lawn while departing the White House on Wednesday in Washington, D.C. Chip Somodevilla/Getty Images hide caption 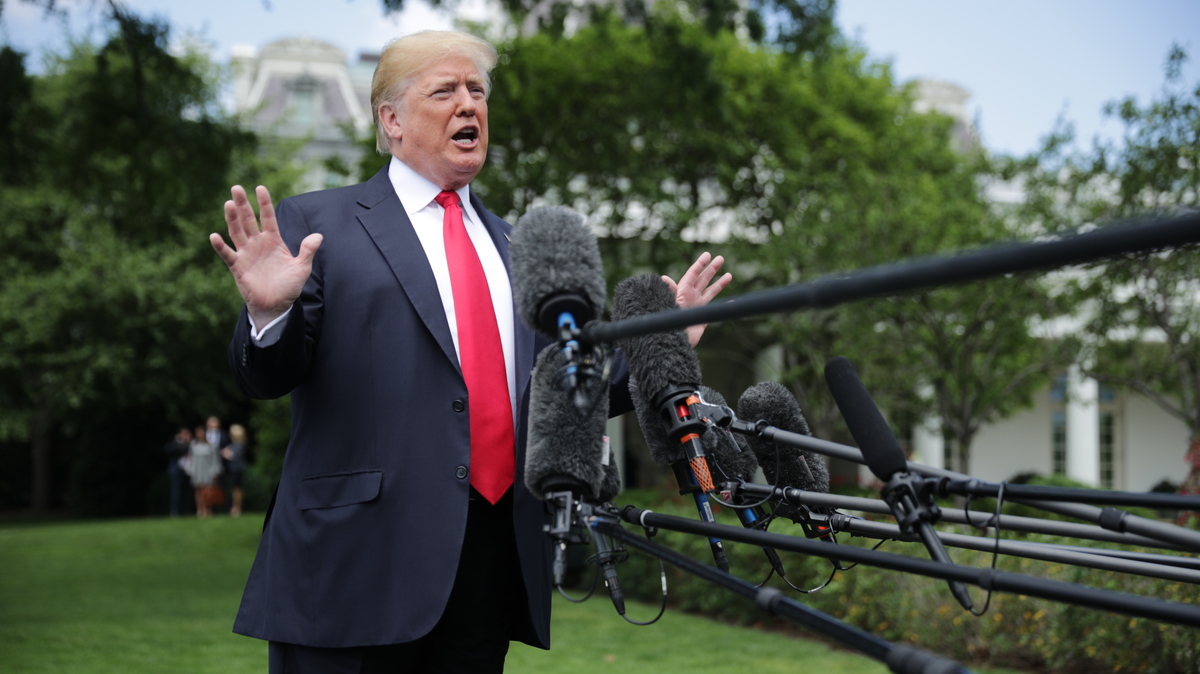 President Trump speaks to the media as he walks across the South Lawn while departing the White House on Wednesday in Washington, D.C.

President Trump intensified his attack on federal law enforcement as he sought to strengthen his case that the FBI's investigation into whether his campaign conspired with Russia actually amounted to unlawful political snooping.

"I hope it's not so, but if it is, there's never been anything like it in the history of our country," the president said Wednesday.

He told reporters before boarding Marine One that he didn't believe he was undercutting the FBI as he charged it with waging a clandestine surveillance operation that he has said would be the worst political scandal in history if it were proven.

Trump had earlier alluded to press reports about the total value of work done for the U.S. government by a man who also served as a confidential informant. Cambridge professor Stefan Halper had a contract with a Defense Department think tank and also worked with the U.S. intelligence community, according to press accounts.

For Trump, the $1 million in payments must have meant a long-term surveillance program.

"If the person placed very early into my campaign wasn't a SPY put there by the previous Administration for political purposes, how come such a seemingly massive amount of money was paid for services rendered - many times higher than normal" Trump also wrote on Twitter Tuesday night.

If the person placed very early into my campaign wasn’t a SPY put there by the previous Administration for political purposes, how come such a seemingly massive amount of money was paid for services rendered - many times higher than normal...

Halper is described as having met with people in Trump's campaign in 2016 who had contacts with foreign governments, including one junior aide, George Papadopoulos, who has admitted he lied to the FBI about overtures from Russian intelligence agents in London.

Halper also met with Trump campaign adviser Sam Clovis in late August or early September of 2016, according to Clovis' attorney, Victoria Toensing. Toensing told NPR that the meeting was initiated by Halper, and that the conversation focused on China. She said the two men did not discuss Russia.

Former Director of National Intelligence James Clapper told NPR on Tuesday there is an important difference between investigators sending an intermediary for these kinds of interviews and sustained surveillance. Earlier allegations by Trump about improper surveillance by the Obama administration, including a "wiretap," ultimately imploded.

The current thread, however, dovetails with the contention from this year that FBI and Justice Department officials abused their powers in asking the Foreign Intelligence Surveillance Court to monitor the communications of another onetime Trump campaign foreign policy aide, Carter Page.

That surveillance continued out of the Obama administration and into the Trump administration under Deputy Attorney General Rod Rosenstein, but Republicans contend that it was improper.

House Speaker Paul Ryan, R-Wis., told reporters on Tuesday how seriously he viewed "FISA abuse," bolstering Trump's charges and supporting efforts by other Republicans in the House to view secret information about the Russian investigation. That's why the Justice Department needs to provide Congress with more information, Ryan said.

White House Brokers, But Will Not Attend, Meeting About Secret Russia Probe Documents

To that end, White House chief of staff John Kelly brokered a meeting set for Thursday at which two key House chairmen are expected to meet with top law enforcement and intelligence bosses.

Trump argues the recent media reports have exposed the shadowy cabal of conspirators inside the Justice Department and FBI who have been perpetuating the Russia investigation as a way to frame him.

"Look how things have turned around on the Criminal Deep State," Trump wrote. "They go after Phony Collusion with Russia, a made up Scam, and end up getting caught in a major SPY scandal the likes of which this country may never have seen before! What goes around, comes around!"

Democrats howled at being excluded from the meeting as it was initially announced. House Minority Leader Nancy Pelosi, D-Calif., and her Senate counterpart, Chuck Schumer, D-N.Y., called Wednesday for a different meeting.

Pelosi and Schumer said that if the Justice Department and FBI are going to brief members of Congress about secret information in the Russia investigation, they should brief the so-called "gang of eight" leaders: the top Republicans and Democrats in each chamber and the leaders of the two intelligence committees.

Trump's tweetstorm on Wednesday morning followed news from the previous evening about a guilty plea in Albany, N.Y. by Evgeny Freidman, New York City's "Taxi King." Freidman admitted to criminal charges that included tax fraud and grand larceny in exchange for a reduced fine and probation.

Press reports suggested that Freidman's agreement could set the stage for additional pressure on Trump's longtime personal attorney, Michael Cohen, who is facing a federal criminal investigation in the Southern District of New York. The two men were described as having a business relationship.

If that's so and prosecutors can count on evidence from Freidman to use against Cohen, it could compound the legal pressure on Cohen and could create a new incentive for him to offer a guilty plea of his own in exchange for evidence against Trump or Trump world.

Cohen, however, said on Twitter that he doesn't have any kind of partnership with Friedman and that the headlines about prospective new legal woes were wrong.

"I am one of thousands of medallion owners who entrust management companies to operate my medallions according to the rules of the NYC Taxi and Limousine Commission. Gene Freidman and I are not partners and have never been partners in this business or any other," he wrote.

“I am one of thousands of medallion owners who entrust management companies to operate my medallions according to the rules of the NYC Taxi and Limousine Commission. Gene Freidman and I are not partners and have never been partners in this business or any other.” #MediaWrongAgain