Accessibility links
James Clapper Has Not 'Admitted That There Was Spying' On Trump Campaign The former spy baron has been making the rounds on his book tour, but he did not say what Donald Trump claimed he said about FBI surveillance.

FACT CHECK: No, Clapper Has Not 'Admitted That There Was Spying' On Trump Campaign

FACT CHECK: No, Clapper Has Not 'Admitted That There Was Spying' On Trump Campaign 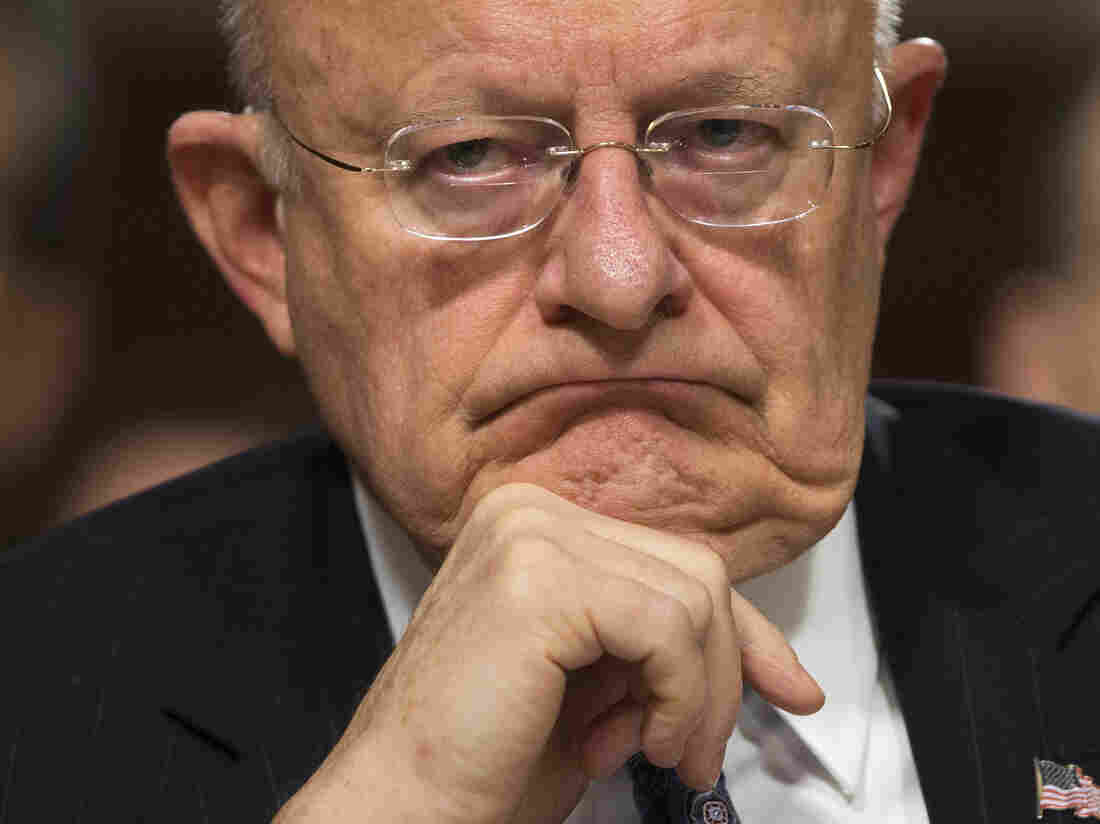 Former Director of National Intelligence James Clapper has been making public appearances all week as part of the tour for his new book. Evan Vucci/AP hide caption 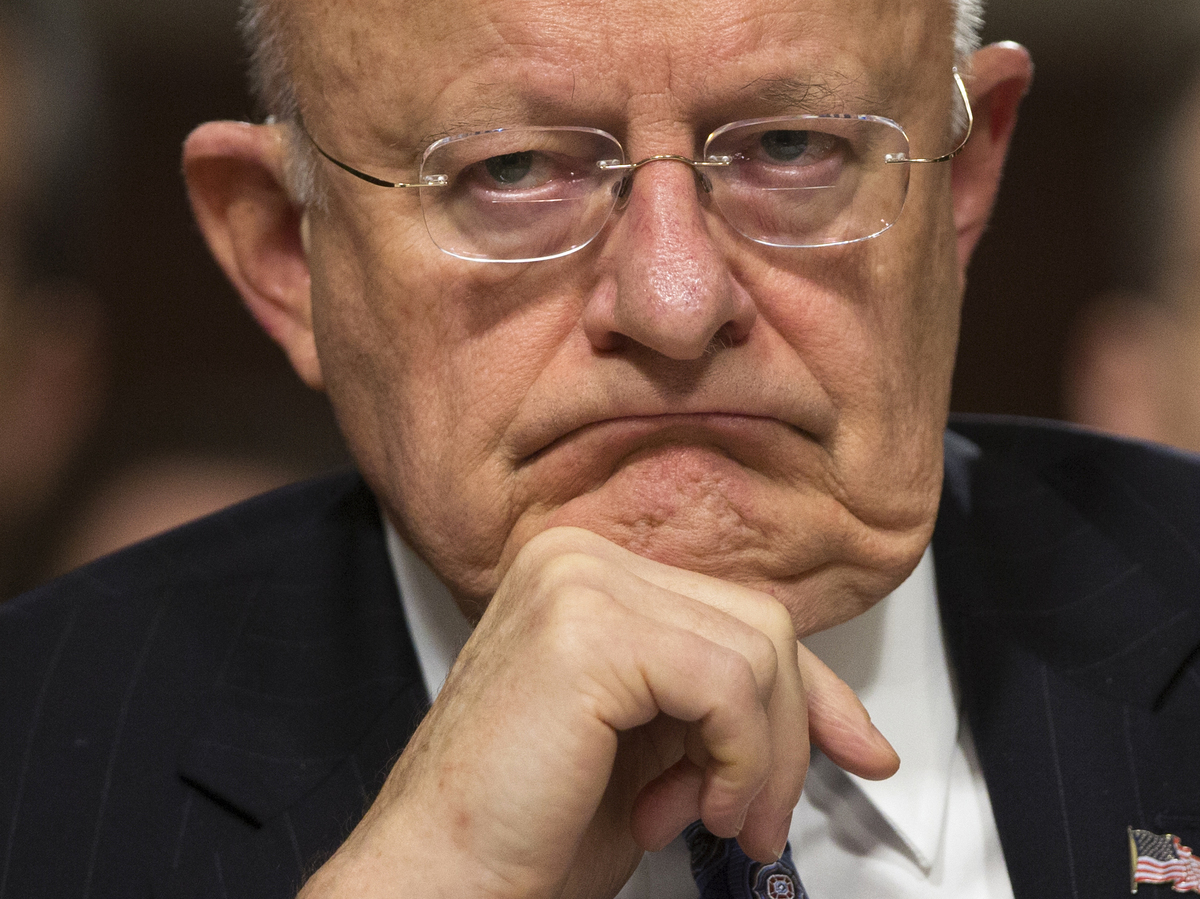 Former Director of National Intelligence James Clapper has been making public appearances all week as part of the tour for his new book.

Former Director of National Intelligence James Clapper has not "admitted that there was Spying" on Donald Trump's campaign in 2016.

The former spy baron has been making public appearances all week as part of the tour for his new book, and interviewers have been asking him about the latest news in the Russia imbroglio. President Trump mischaracterized what Clapper said as part of his ongoing political counterattack against federal law enforcement and the intelligence community.

So, wait, what happened? In 2016, Russian intelligence agents began reaching out to members of Trump's presidential campaign. They offered dirt on Trump's opponent, Hillary Clinton, and "off-the-record" meetings with Russian officials. When the FBI got wind of this, it opened a counterintelligence investigation.

As part of investigators' desire to find out what was happening, they sent a confidential informant, Cambridge University professor Stefan Halper, to talk with three of Trump's campaign advisers.

One of them, George Papadopoulos, has pleaded guilty to lying to the FBI about his contacts with the Russians. Another, Carter Page, had years-long connections with Russia's intelligence service and visited Moscow twice in 2016. A third, Sam Clovis, is believed to have encouraged Papadopoulos to cultivate his ties with the Russians. Clovis' attorney told NPR that Clovis remembered meeting with Halper but that their conversation was mostly about China.

Later in 2016, the Justice Department and the FBI asked the Foreign Intelligence Surveillance Act Court to authorize electronic surveillance on Page, based partly on his previous ties to Russian intelligence and partly on allegations included in the infamous dossier compiled by former British intelligence officer Christopher Steele.

That dossier was underwritten by Democrats, prompting Republicans to charge that the Russia investigation has its origins in partisan agitprop. The dossier has only been partly verified by the FBI, and it includes outrageous allegations, which have on their own drawn criticisms from Trump and his allies. (NPR has not detailed the contents because it remains unverified.) But the dossier and Page weren't what sparked the Russia investigation. Papadopoulos was.

Trump and his aides, including Page and Clovis, say they did not conspire with the Russian attack on the election. The president points to the conclusion of the House intelligence committee's Republican majority, which found no wrongdoing in the matter. And on Wednesday, the White House restored a top-level security clearance to Trump's son-in-law, Jared Kushner, after he gave a long interview about the Russia case to the office of Justice Department special counsel Robert Mueller.

The inference drawn by outside observers was that Kushner — a key player in the 2016 campaign who had several contacts with foreigners including Russians — has received a clean bill of health.

What do the feds say? The Justice Department and FBI have defended the evidence they used in their FISA applications. And the surveillance they conducted on Page continued out of the Obama administration and into Trump's administration. Deputy Attorney General Rod Rosenstein, a Republican who was appointed by Trump and confirmed by the Republican Senate, also signed an application for a warrant to continue the surveillance.

Meaning what? Officials in both the Obama and Trump administrations not only felt confident about the surveillance on Page, but also the collection itself was yielding something. The surveillance court requires that its warrants produce foreign intelligence in order to keep them active.

But, to be clear, there was spying going on here. Yes — the FBI was spying on Russia's attack on the 2016 election, and as part of that, it was trying to find out whether any Americans were involved.

What Trump says is that all this amounts to improper political snooping by then-President Obama to try to help Clinton and that there is a conspiracy by "biased" FBI and Justice Department officials to frame him.

Moreover, Trump charges that the Obama administration "implanted" a "spy" in his campaign. Trump has leaned into his months-long attacks on the Justice Department and the FBI, saying that if there was a "spy," it would be the worst scandal in American political history.

Is there any evidence that any spies were planted in the Trump campaign? No.

Here's where Clapper comes in. What he has said in several interviews this week is that there are strictures on the way the FBI can use confidential informants. Other former national security officials tell NPR that sending an intermediary like Halper is a less aggressive way for FBI to try to learn from subjects in an investigation. That way, the bureau doesn't have to send special agents themselves who might flash their badges and let the people involved know the FBI was interested.

Trump seized on that phrase on Thursday morning in a tweet.

Clapper has now admitted that there was Spying in my campaign. Large dollars were paid to the Spy, far beyond normal. Starting to look like one of the biggest political scandals in U.S. history. SPYGATE - a terrible thing!

In Trump's construction, a counterintelligence investigation into Russia's active measures was an abuse of power by Obama. It's the latest charge by Trump or his supporters about such abuses by Obama.

Earlier, Trump accused his predecessor of having his "wires tapped" at Trump Tower and people in the Obama administration of inappropriately "unmasking" intelligence that related to Trump aides and, more recently, of the alleged abuse of FISA involving Page. Those charges were not substantiated.

House Speaker Paul Ryan, R-Wis., repeated to reporters this week that FISA abuse was a serious issue and that members of Congress needed to exercise their appropriate oversight.

This brings us to Thursday.

Two important Republican committee chairmen in the House — Devin Nunes of California and Trey Gowdy of South Carolina — have been agitating for months for Rosenstein to give them more secret information about the Russia investigation.

Over the weekend, after the press reports about the confidential informant, Trump said he was getting on board. He and White House chief of staff John Kelly brokered meetings at which Rosenstein and FBI Director Christopher Wray talked about the Russia case.

WH: No Problem For Kelly To Attend Meetings On Russia Investigation Secrets

What did they discuss? We don't know (yet). Halper's name is already public following the press reports. It isn't clear what else Rosenstein and Wray might have talked about, or what Director of National Intelligence Dan Coats, who is also involved, wanted to say.

What do the feds say about revealing the name of a confidential informant? They're not happy about it. The FBI has reportedly had to take precautions in other active cases, because now people who might not have known before about Halper's arrangement now certainly do. Halper has declined to comment to NPR.

Wray told Congress that the day the FBI couldn't guarantee it could protect such sources, it would make America "less safe." And on Wednesday, Comey warned that the ongoing partisan war over federal law enforcement would do "lasting damage to our country."

Facts matter. The FBI’s use of Confidential Human Sources (the actual term) is tightly regulated and essential to protecting the country. Attacks on the FBI and lying about its work will do lasting damage to our country. How will Republicans explain this to their grandchildren?