Accessibility links
On 'DAYTONA,' Pusha T's Time Is Of The Essence The rapper and president GOOD Music talks about his new album, DAYTONA, the ways the #MeToo movement has hit the world of hip-hop and working with Kanye West, even when their politics don't align. 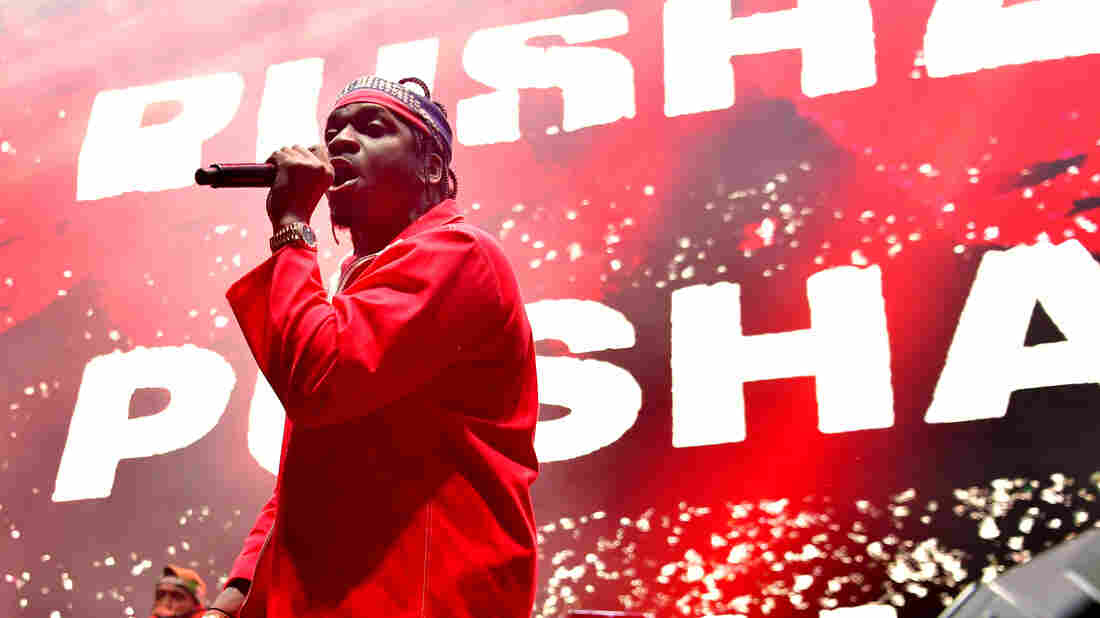 "We made the soundtrack for those who are the purist in everybody," Pusha says. Neilson Barnard/Getty Images hide caption 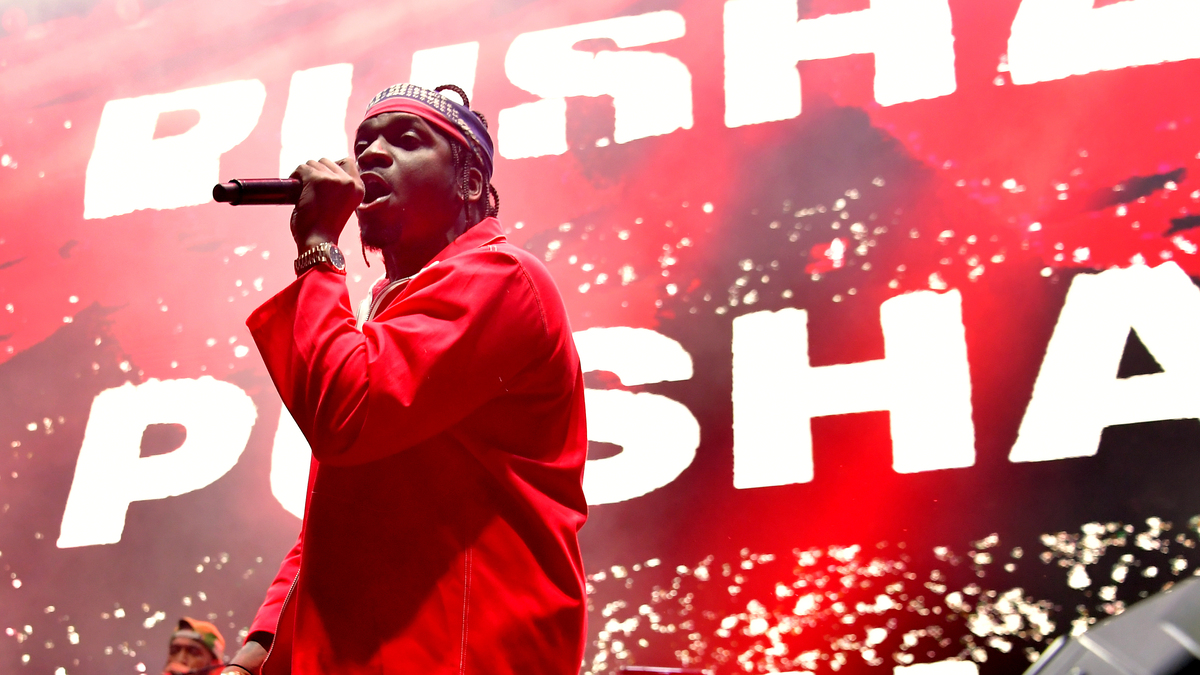 "We made the soundtrack for those who are the purist in everybody," Pusha says.

After much anticipation, Pusha T's third studio album has arrived. And though it was years in the making and is, according to the rapper, a study in having the luxury of taking your time, the last week leading up to the project's release was a haphazard race to the finish line as much as it was a celebration of the long-awaited music.

After months with no update from the coke rhymes veteran and former Clipse member, fans learned so much about this album in such a short period of time: That it was a seven-song project, that it was executive produced by Kanye West, the founder of GOOD Music, the label for which Pusha T records and of which, since 2015, he has also been president. Though the album title King Push had been floating around since 2014, when the album was announced, that had been changed to DAYTONA in homage to his favorite type of Rolex watch. On Wednesday, Push told Power 105.1's Angie Martinez that it was supposed to be eight songs, but then one fell off the final track list. He also revealed that Kanye had called him at 1:00 a.m. that day to tell him he was changing his album art.

"This is what the people need to see to go with this music," Pusha T said to Martinez, quoting West. The new artwork, which according to Push costs $85,000 to license, is a 2006 photo of Whitney Houston's disheveled bathroom, possibly highlighting the connection to the superstar's 2012 death due to overdose and Pusha's drug toting past, which continues to be a central theme of much of his music. 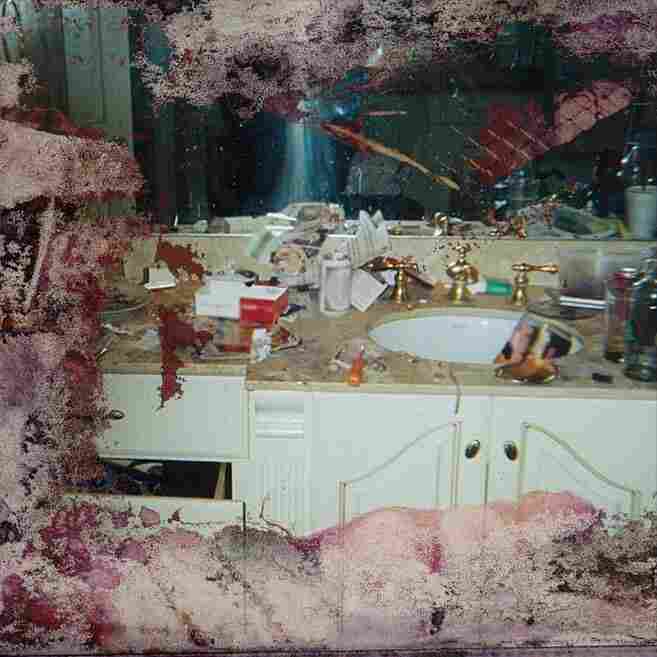 But despite the logistics of the album being a moving target, the music itself is not. Over just seven songs, Push delivers the type of bars synonymous with his brand: combative and grimy but never rushed, nuanced but never too brainy. In a musical landscape defined with over-saturation — albums running 10 songs too long as a catch-all strategy, mixtapes full of half-hearted hooks, streaming services making a business out of playlisting — apathy can kill the pleasure of actually listening. Pusha's bars on DAYTONA cut through that noise. From the album's two features, by Kanye West and Rick Ross, to the soul samples to loaded subliminals aimed at Drake, Birdman and "pink hair" rappers, DAYTONA moves fast and leaves a fiery tread. Clocking in at just over 21 minutes, it's clear that a philosophy of quality over quantity prevails here.

Push revealed that the decision to make DAYTONA so short was a game time call from West. "I probably wanted to be 12. 10 or 12," Push tells NPR Music. "We had a full on seven-paragraph back-and-forth about it. Or I'll say I had the back, he never came forth with it. But I sent seven paragraphs of why it did not need to be seven. You know he basically said, 'This what I feel, you gotta ride with me on it.' "

Kanye has been in exceedingly vocal in 2018. His Twitter rants and impromptu TV appearances have been the prelude to this flood of new music. West has said that DAYTONA is the first album in what will be a summer full of new releases by GOOD Music. But with trust instilled, Pusha has held on for the ride and taken fans with him.

A few days before the release, NPR Music broke down a few songs from DAYTONA with Push himself, got his take on the #MeToo movement trickling into hip-hop and discussed trusting Kanye even when their politics don't align.

You're talking about a lot of extremely timely stuff on DAYTONA. How recently there were these all recorded and where were they recorded?

They were recorded between Wyoming and Utah.

What was the creative atmosphere like in Jackson Hole? Was it similar to when you guys went to Hawaii? What were the creative epiphanies that you had?

Well, basically Jackson Hole is, for me, a guy who's 100 percent not an outdoor person, it gives middle-of-nowhere rehab vibes. Middle of nowhere, very detoxifying. It's a place where I knew, in going there, that the work would 100 percent get done. And, you know, it was a place of focus, and always something great came out of it, whether it was the verses were crazy, whether the beats were great, whether was a day of like finding samples, it was just like, the place we could think creatively. If I'm there and Nas is there, it's like, "You know, go check this out," or "Hey, I heard that your new s*** sounds crazy right now." Yeah. You just get opinions and just energy. Cudi, you know, he's like, "Yo, Push, I just heard what you did up there, I heard you in the right direction." You hear everything. Right. Wrong. Whatever.

Let's get into the specific songs. On "Hard Piano" you open really strong and set the parameters, "I won't let you ruin my dreams / Harvey Weinstein the kid. / Good morning, Matt Lauer can I live?" Those are clear name-drops that have been in the news recently, associated with the #MeToo movement. What are your points of view of that movement from a leadership role as the president of G.O.O.D. Music and then as a rapper? And how do they differ, if at all?

You know, I feel like they don't differ at all, honestly, not for me because like, wrong is wrong. And you know, a lot of people, especially in music, we're talking about certain energy that's going on outside. But listen, that whole rape culture, taking advantage of culture is never the move ... ever. That's something that's really not even respected where I'm from, like in any capacity at all. I feel like the bar itself was speaking on what's going on. We're speaking and highlighting what's going on and that's the type of rap I'm into: rap that speaks about what's going on outside. That's the only rap I know, personally. So then [that's] what we get paid to do. That's the only real way I feel like I can be getting gems from music — just speaking on real situations and things that are going on now outside.

So there's been commentary about this, but there hasn't been much action associated with it. How do you feel about whether the reckoning or purging of the #MeToo movement has or has not really hit hip-hop?

All right ... Man, you know, I can't really say that it hasn't hit hip-hop. I can't say that it is OK. I'm seeing a lot of the younger artists come under fire for their actions and even more recently with this Spotify playlist thing. I'm noticing that I think — and don't want to speak because I'm not all the way fully aware but — Spotify is taking people off their playlists if they've had any of that type of energy or any type of negative encounters. I mean I don't feel like hip-hop has been exempt, but I feel it's a real wake-up call to all of us like, "Just listen. Be mindful. Be mindful and do the right thing like that." There's actually no place for it. And it's a bit embarrassing to even have to say that. Like, "Don't do this." You know it's sort of retarded, but hey, you know, it must be said. And I think everyone's taking notice.

Do you think this year we'll see more of a shift in that conversation towards action?

You name a song on DAYTONA after Meek Mill with "What Would Meek Do?" showing your support for him. It features Kanye and there's a clear juxtapositions of you two talking to each other within the verses. Kanye raps about wearing a MAGA hat. Do Ye's politics conflict with yours on this album?

100 percent! Well I mean it's not even ... It's something that doesn't even involve work. Like here, it involves the opinions.

We don't always agree and it'll be, "I don't feel that. I think you should look at it this way. I think you should look at it that way." So with that being the case, this is no different for me. He knows my whole stance. He's known my whole stance before making his stance, which was with Hillary with the Clinton campaign with me going to The White House and working on prison reform. Everybody knows that, so when he came with his support of Trump, of course I 100 percent I don't agree.

Let's talk about "Infrared." There's pointed words to a few of your fellow rappers and maybe rap adversaries: Drake, Birdman. What do you think is your motivation for having an adversary in hip-hop? Does it make you feel like a target? Does it help you to aim at a target?

What is your overall truth that you want fans to get from the whole project?

This whole message is time and having the luxury of time and knowing you know I just want my core to understand it we took our time. You know you're basically walking in on a Pusha T and Kanye West therapy session. This is because of the therapy session, man. Everybody knows where he was when we started this process — he wasn't even doing music, man. We went and found this. We took our time. I mean, we've made this soundtrack. We made the soundtrack for the purist in everybody.