Accessibility links
'Some Trick' Takes On The Life Of The (Delightfully Irritable) Mind Helen DeWitt's new story collection seems less like a book, and more like a series of notes from some vast, alien intelligence, capable of picking apart human habits with startling precision. 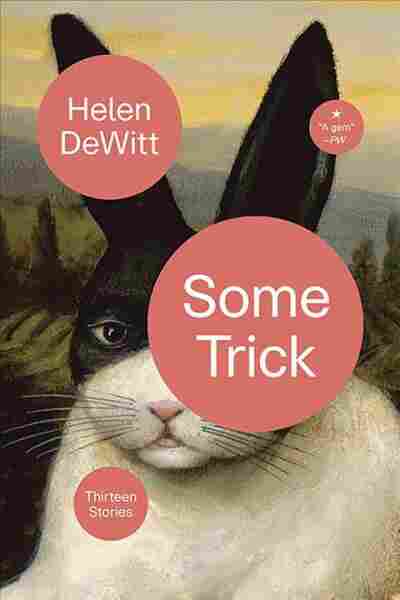 Helen DeWitt's Some Trick seems less like a story collection and more like a series of notes from some vast, alien intelligence, not quite human itself, but capable of picking apart human habits with startling precision. DeWitt's characters are savants, weirdos, and artists, often trying to achieve their ends against the best efforts of the well-meaning and conventional people around them.

In "My Heart Belongs to Bertie," a man who writes books about math for children tries to sketch out the idea of binomial distribution to his amiable, innumerate literary agent. They are sitting at an American diner. He has brought handouts. But the "surface of the table was taken up with all sorts of paraphernalia superfluous, not to say impedimental, to ratiocination." That is to say, ketchup, mustard, salt, pepper, and the other accoutrement of eating are blocking his charts. Things go downhill.

DeWitt's fiction is preoccupied with maneuvering around — or preferrably hijacking for one's own use — all that paraphernalia superfluous, not to say impedimental, to ratiocination. That can include people, ideas, bureaucracies, or businesses (especially book publishers). One of the collection's prevailing themes is that inefficiency is not just inconvenient, but contemptible.

It details social and sexual codes as scrupulously as mathematical functions. Emotions, when they appear, are described both carefully and distantly. Take, for instance, "Famous Last Words," which describes the thought process of a woman deciding to have sex because it isn't worth the effort of turning down a persistent suitor. "Let's go upstairs," he says. She writes,

"There is a text which I could insert at this point which begins 'I'm not in the mood'... My own experience has shown this to be a text particularly susceptible to discursive and recursive operations, one which circles back on itself through several iterations and recapitulations, one which ends pretty inevitably in 'Oh, OK,' but only about half the time as the contribution of my co-scripteur. I think for a moment about giving the thing a whirl, but finally settle on the curtailed version which leaves out 'I'm not in the mood' and goes directly to 'Oh, OK.' X and I go upstairs."

Hiding behind the sterile prose is resentment, calculation, and finally, resignation. DeWitt describes subtext elsewhere: "as invisible, as plain to the eye as the breeze which stirs the leaves of the copper beech in the quadrangle ..." The emotion in her writing is so often like that — invisible but for the words stirring around it.

Sex as a compromise or concession is a common theme. In DeWitt's best book, The Last Samurai, her narrator Sibylla has gone home with a mediocre author she calls Liberace for his "terrible facility" and "terrible sincerity."

'Some Trick' seems less like a story collection and more like a series of notes from some vast, alien intelligence, not quite human itself, but capable of picking apart human habits with startling precision.

She writes, "Liberace talked on and on. Gradually as we drank more drinks Liberace talked more and more and asked more and more if he was boring me, and as a result it seemed less and less possible to leave, because if he wasn't boring me then why would I want to leave?" Then Sibylla has an idea. "It would be rude to put a hand over his mouth, but if I were to put my mouth on his mouth this would stop him talking just as well without being rude." They have sex.

Being in these situations of social and sexual pressure is eminently conceivable — articulating the small calculations latent in them less so.

"When a human being develops an argument, when a human being attempts not only to think but to speak with precision, he or she is often made to feel that this is a mark of social inadequacy and that there is something comical about it," notes the narrator in "My Heart Belongs to Bertie."

I often think of a 2016 profile of DeWitt, which noted that she likes to use the phrase "the life of the mind." The journalist wrote that she said it "without irony" — as if it were a little tacky, or a little cute, to do so. Maybe a more socially adept author would be cooler about it, or more self-deprecating. But DeWitt doesn't bother adapting. In her fiction, she uses Greek if Greek is called for, or graphs if graphs are called for. Ideals such as likeability and accessibility seem irrelevant, if not quaint, in the face of her wonderfully irritable intelligence.