Accessibility links
Soul Queen Irma Thomas Becomes A Doctor Thomas earned the title of the Soul Queen of New Orleans three decades ago. Earlier this month, she added the title of doctor to her name thanks to Tulane University. 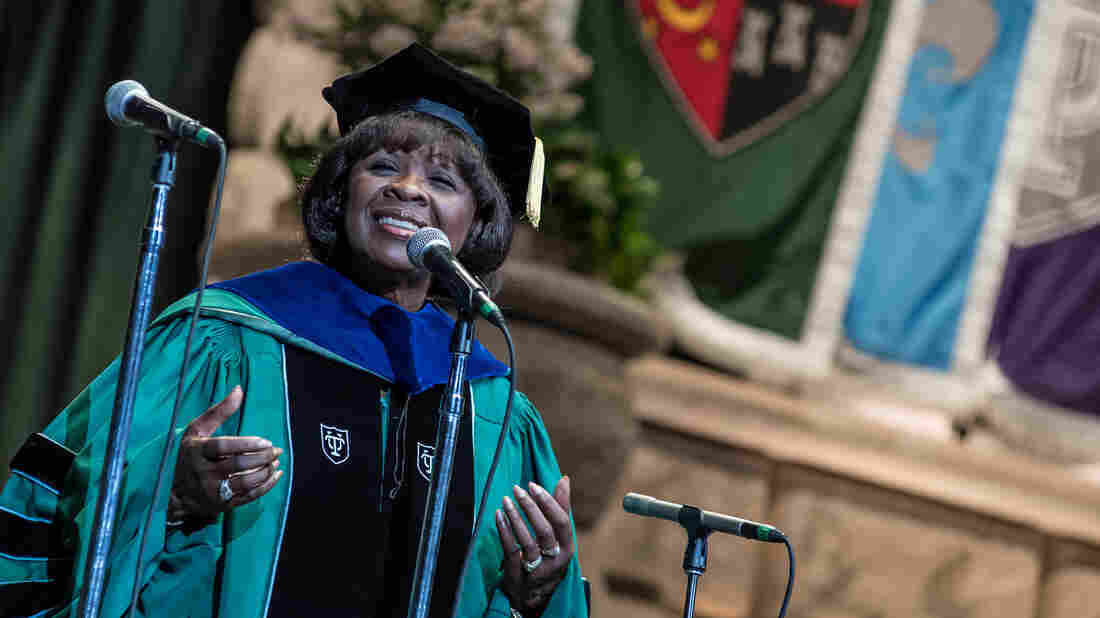 "When you go get your education, you've earned that," Irma Thomas says. Sally Asher hide caption 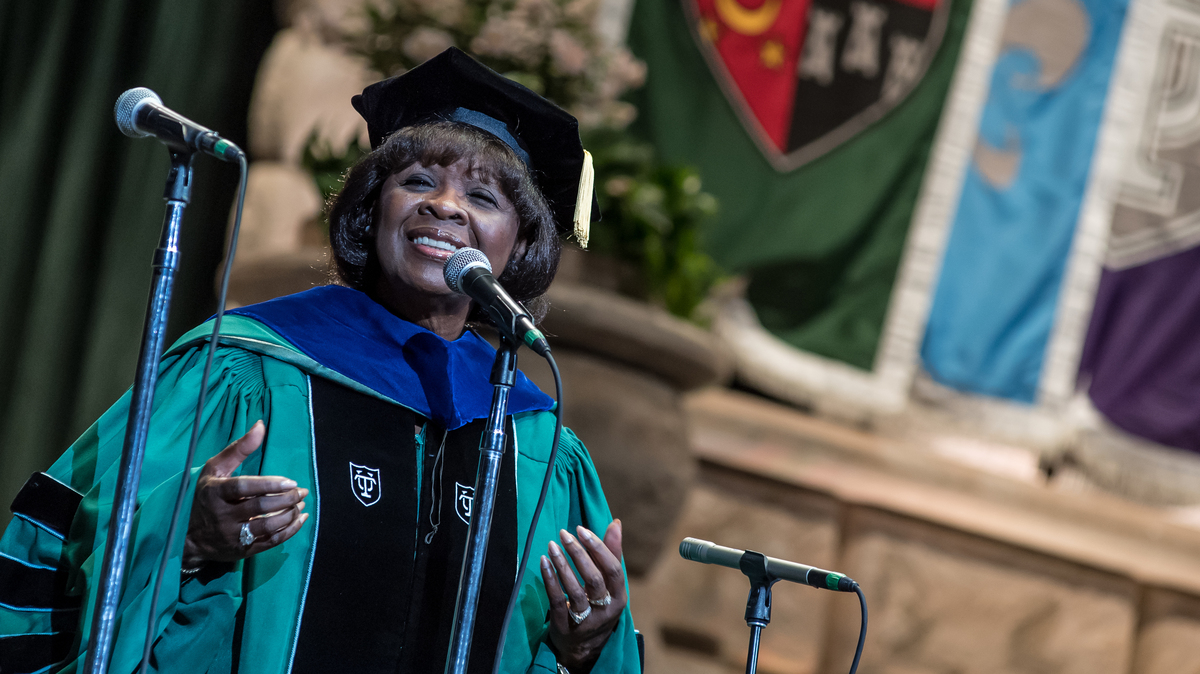 "When you go get your education, you've earned that," Irma Thomas says.

Irma Thomas is known to R&B fans all over the world, but she's most beloved in her hometown of New Orleans. Everyone in New Orleans calls her Irma. And everyone knows her songs, like "It's Raining." Irma sang the 1962 R&B classic at Tulane University's 2018 commencement ceremony earlier this month — the same ceremony where she received an honorary degree from the school.

"Well, why not? I'm there," she says. "Few extra minutes won't hurt anything. I mean, it [will] bring some more joy to some more people, why not?"

Irma is well known for giving her fans what they want. The 77-year-old has been recording and performing for over half a century and she always sings requests. One song she always dedicates to her fans is "Forever Young."

"I have fans who've been fans of mine for the better part of my career, and they have brainwashed their children with my music that they have become fans," she says. "So when I sing 'Forever Young,' I'm thinking about these people [that] have been with me all these years with this youthfulness about them. And it always makes we well up when I sing it."

Irma has outlived most of her New Orleans musical contemporaries, including Allen Toussaint, songwriter and arranger extraordinaire, who died less than three years ago and wrote many of the soul star's early hits. Toussaint often referred to Irma as his muse. "When I wrote every song that I have written for Irma, she was sitting there at the time, so I had instant gratification," Toussaint said during a 1998 interview outtake with public radio program American Routes. "It made it hard on judgement because I couldn't judge whether a song sounds good or bad; she just sounds good on everything."

Scott Billington has been Irma's record producer for 30 years. "Her voice, that kind of molasses quality — it just envelopes you. It's like putting a warm blanket on when you hear Irma sing," Billington says.

That voice was recognized early on. Irma won first place in a talent show when she was in the sixth grade, but by the time she was 14, she was married and pregnant. "When I was coming up, a teenager who was pregnant was not allowed to attend school," Irma says. "So I didn't drop out. It wasn't a choice I had."

After Hurricane Camille devastated New Orleans in 1969, Thomas moved to California. By then, she was a single mother of four children singing at night and working at Montgomery Ward by day selling sewing machines. She would cut out dress patterns for her children and would sew them at work as demos for the sewing machine. "They say, 'Work smart.' And that's what I was doing: working smart," she laughs.

She was also getting smart, too. When she moved back to New Orleans, Irma enrolled in Delgado Community College to earn her GED. Between her kids and her career, it took Irma 15 years to get an Associate's degree in business.

"I started at 45 and I didn't graduate until I was 61 'cause I was stopping and starting," she says. "I was touring and I was doing homework on the plane or wherever I was, so it took me a while to get through it, but I didn't stop. I wanted to graduate! And yes, it is a wonderful feeling."

Irma even puts the feeling of earning her degree above receiving a Grammy Award, which she did in 2007 for her album After the Rain.

That's one reason why Irma returns to Delgado every semester. Melanie Deffendall is a professor at Delgado and also the director of the Irma Thomas Center for W.I.S.E. Women at the college. W.I.S.E. stands for "women in search of excellence." Deffendall knows that Irma understands the struggles of the women in the center. "She was them: working, going to school, and raising children," Deffendall says. 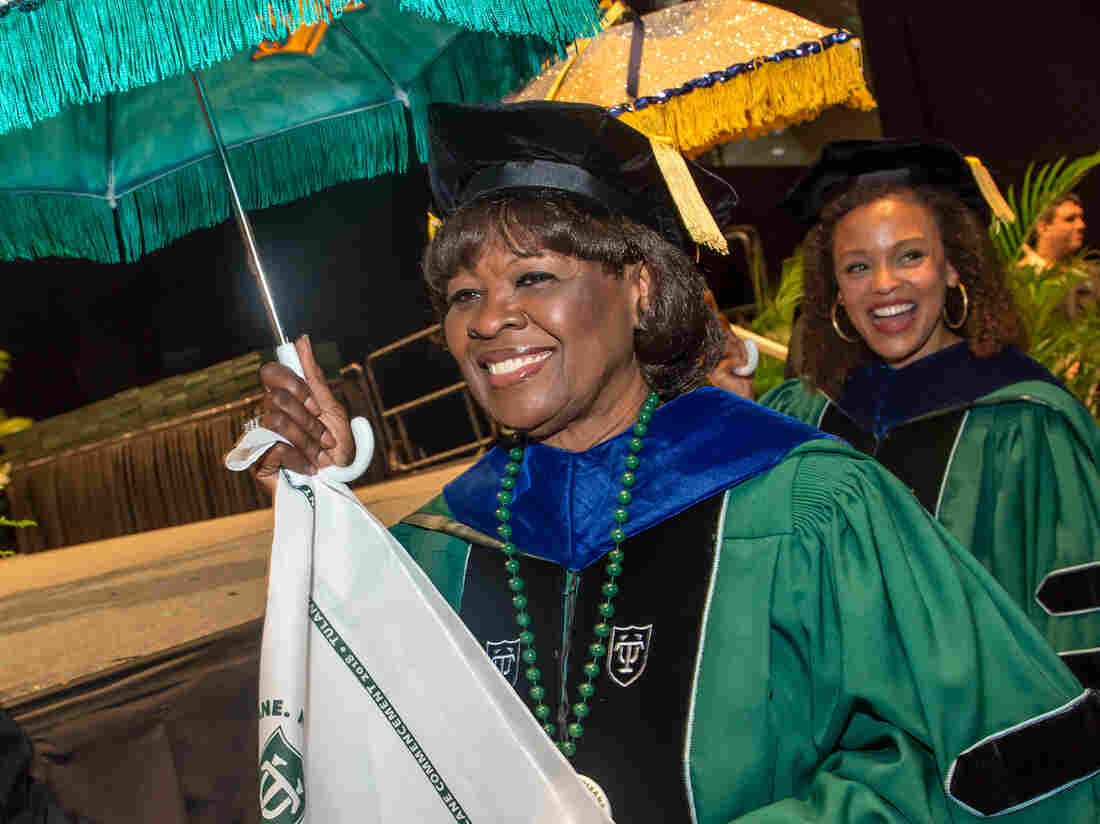 At Tulane's commencement where she sang "It's Raining," Irma also added another degree to her resume: Honorary Doctorate of Letters. But even though you can now refer to her as Dr. Thomas, chances are that title will never replace the one officially conferred upon the artist in 1989 by New Orleans' then-mayor: "the Soul Queen of New Orleans."