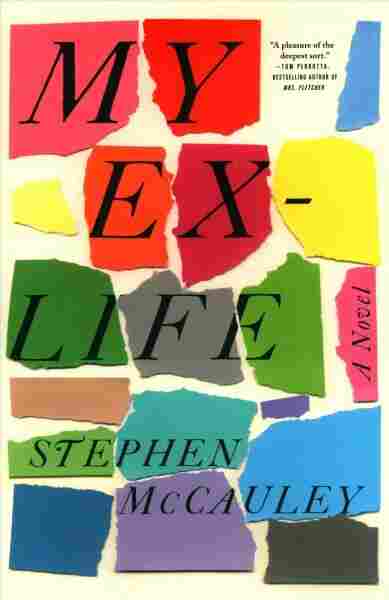 I didn't know how much I needed a laugh until I began reading Stephen McCauley's new novel, My Ex-Life. This is the kind of witty, sparkling, sharp novel for which the verb "chortle" was invented.

I found myself "chortling" out loud at so many scenes, I even took screenshots of certain pages and started texting them to friends. Some of those friends texted back, "Love this!" or, "Send more, quick!" To which I replied, "Support the arts! Buy the book!"

As he did in his 1987 debut novel, The Object of My Affection, which was made into a movie with Jennifer Aniston and Paul Rudd, McCauley focuses his story on two main characters — a man and a woman, soulmates who don't "click" sexually.

Julie Fiske has now entered that phase of life where, we're told, her face had acquired that "yesterday's-dessert" look common to the late middle-aged. Julie's husband has recently left her, and her teenage daughter, Mandy, suffers from a lack of affect and ambition.

Determined to raise enough money to buy her ex's half of the charming, rickety Victorian house they once shared on the seacoast north of Boston, Julie has been renting out rooms on Airbnb — a source of much comedy here. Meanwhile, her ex-husband has been getting antsy about the money and their daughter's slacker behavior. That's where Julie's first ex-husband — our other main character — comes in.

David Hedges lives in San Francisco and is self-employed as a pricey "independent, full-service, college counselor," which means he reads a lot of college application essays — about 99 percent of which, we're told, start off with a mention of a grandparent and/or cancer.

David's just been dumped by his long-time lover. Back when he was young and married to Julie, David wasn't quite sure of his sexuality; when he became sure, their brief marriage ended.

Now, out of the blue, the phone rings: It's Julie, whom David hasn't talked to in almost 30 years. After an awkward catch up, she asks if David would give Mandy some guidance about the college application process. Turns out, he's happy to do more than that.

Binge eating because of his break-up, drained from years of dealing with helicopter parents and terrified that the carriage house he rents in San Francisco is about to be sold, David decides to deal with his problems by escaping from them. He catches a flight to the East Coast and settles into Fawlty Towers for a while with Julie and Mandy.

Hilarity and mayhem ensue, but what helps make My Ex-Life so striking is McCauley's droll precision with language. David's insights into the college application industry are reason enough to savor this novel. Take this gem, courtesy of McCauley's omniscient narrator:

David thought of his true mission as helping his teenaged clients gain a realistic understanding of who they were and what they could achieve in life once they stepped away from their parents' self-aggrandizing fantasies of them. Their parents had been so insistent about instilling self-esteem, they'd fallen into the trap of telling their kids they could do anything. Unfortunately, almost everyone interprets doing "anything" as doing the same three or four glamorous and impressive things — going to Harvard, retiring before ever working, giving an Oscar acceptance speech, and becoming the next Mark Zuckerberg, except hot.

I said a moment ago that McCauley's droll way with words is the element that makes this novel special, but it's more than that: His social satire is suffused with generosity, an awareness that most of us are destined to make colossal mistakes out of the best of motives.

By the end of this story, as Julie and David revisit their own original blunder of a marriage, McCauley summons up a conclusion that makes a profound statement about time passing and the shifting mirage of life goals. Like the best of comic fiction writers — I'm thinking, in particular, of the immortal Laurie Colwin — McCauley draws his readers into reflecting on some of the big questions — sexuality, mortality, failure — with the lure of laughter.